Are you braced for more bad news?  Actually, most of the following stories are pretty upbeat.   I’ve been pounding away here.  I’m about halfway through this grueling winter project.  After this post, I have just five sections to go but they are the biggest and comprise about half of my website:  theatres, gas stations, eateries, mid-century, and signs.   I have about 2,700 pages at my website at this point.  I’m not counting the number of photos but I know it’s over 60,000 (the last time I counted).

So, here are some highlights (lowlights?) from four sections. As always, the photos were taken by me, the “news” snippets are courtesy Google StreetView Maps.

The Connell Motor Company building in Oakland, California is still there.  Sort of.  It still had the 1947 look in 2008 (well, those signs were not original — originally just “Connell” around the roof lip):

By 2014 — repainted & other plastic backlit signs:

And now (as of  this May map), the overwhelming and ghastly apartment building behind was completed.  I guess that sign is a retro attempt (backlit plastic letters): 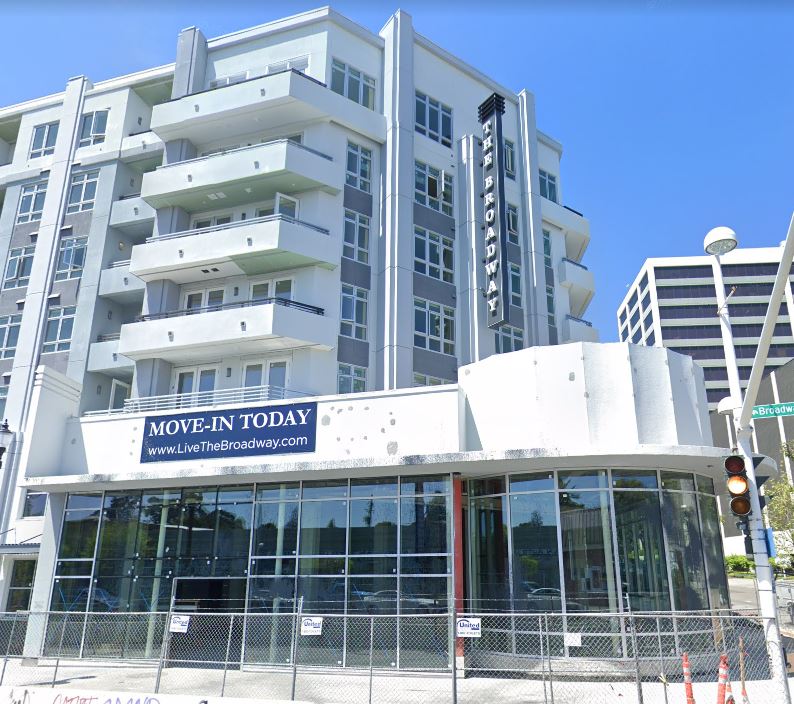 “Startling” remodeling is not confined to California.  Here’s what recently happened to this former dealership in Bad Axe, Michigan.  I would guess built in the 1920s.  Nice stairstep brick typical of many dealerships from that time.  My photo from 2011:

It still looked like that in 2015 but as of this new 2018 map, this is what’s happened to it.  Backlit plastic letters now read “Flannery Auto Mall”: 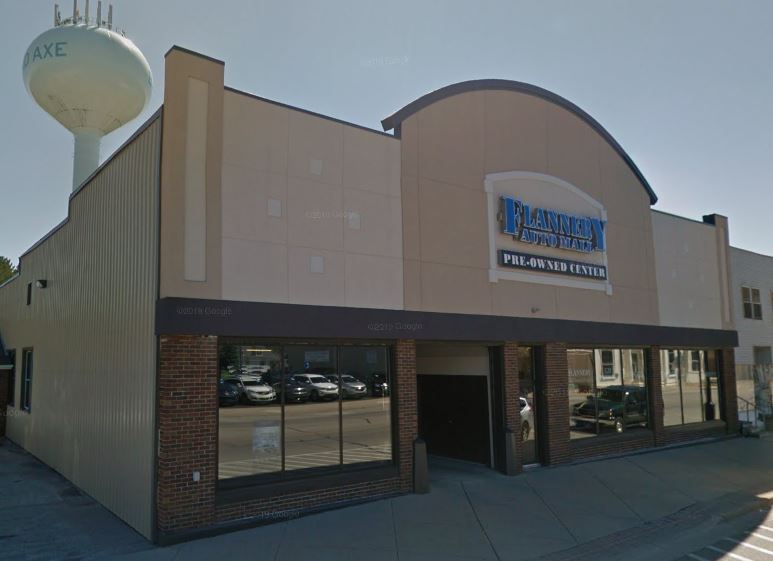 Maybe you have already heard, Magic Forest in Lake George, New York has been re-themed and the owner sold off most of the fiberglass 1960s-era statues (dozens of people & animals) at the end of last year.  The bad news is that you won’t be able to see the variety all in one place any more.  The good news is that most of the statues have gone to loving homes and they are being restored.

One happy story is the nearly 40-foot-tall Uncle Sam statue (produced by International Fiberglass) which was originally installed at the Danbury Fair in Danbury, Connecticut is now back in Danbury at the Railway Museum.

Here he is installed in July, after being restored — photo from this publication:
http://hatcityblog.blogspot.com/2019/07/uncle-sam-returns-to-danbury.html

Missing now — this nice wood-carved statue of Jim Bridger in Lander, Wyoming.  He was installed in front of a liquor store around 2000.  By 2018, the store and the statue were gone.  I hope he’s safe somewhere.

Also gone now:  this Pirate that was in Breinigsville, Pennsylvania.  It was a matter of time, I suppose.  He stood in front of the Terry Hill Waterpark which opened in the late 1960s and has been closed since 2013.  He was gone by 2018.  I sure hope someone has him and we see him somewhere again.

John Margolies photographed this statue at a mini golf in Hampton Beach, New Hampshire in 1984.  I have often wondered if this was the same statue or if there was more than one built:

Naturally, a few classic rooster, cows, bulls, and other animal statue have disappeared.  But there are still lots of them out there.  Some special one-of-a-kind losses are harder to take.  Like this sweet spotted chicken in Bothell, Washington:

The giant Great Dane statue at Great Dane Trailers — has been moved from Savannah, Georgia to their Brazil, Indiana location:

From this article — restored and installed in November:
https://www.thebraziltimes.com/story/2563598.html

How about this frog in Fontana, Wisconsin from a long-lost mini golf.  One of my photos from 2011.  I was sure he was gonna be a goner.  I think those wood doors indicate that he was originally the little shack where you picked up your clubs and balls:

But he was declared a landmark and restored in 2012.  Just look how gorgeous he looks now.

This spotted cow (steer?) in Brookfield, Illinois was installed on the roof of a restaurant in town for decades.  My photo here from 2009.  By 2015, she (?) had been painted brown and white.

In 2018, the most recent restaurant had closed and the building was being remodeled.   The cow was removed lives on!   She is now displayed and loved on at the local farmers market.  From the Brookfield Farmers Market Facebook page: 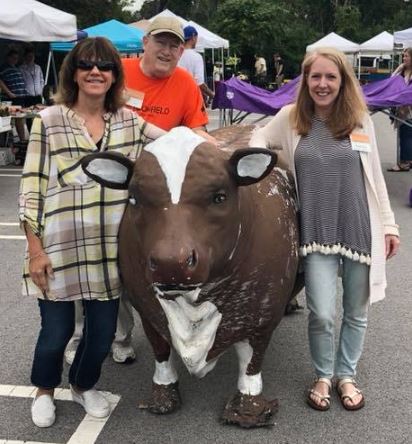 The Hilltop Steak House in Saugus, Massachusetts had a whole herd of cow/bull statues:

But then in 2013, the restaurant closed.  The world-famous giant cactus sign was adapted for a strip mall.  But the cows had to go.  Luckily, at least three of them found their way to the MarketStreet mall in Lynnfield, Massachusetts: 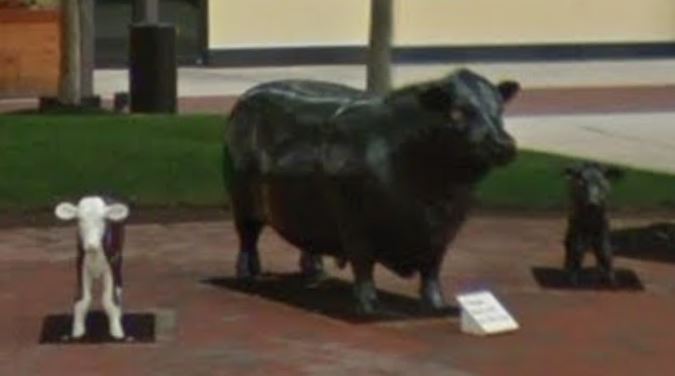 What surprised me though as I surfed GoogleMaps to find those guys is the cow that’s now in the same mall in front of the J.P. Licks ice cream store.  I’m pretty sure that it didn’t come from Hilltop:

Note the world map painted on her side.  The only other cow I’ve ever seen like that was in Guelph, Ontario in front of a Lely Canada (robotic milking company) office.  By 2009, the statue and business were gone:

Could this be the same statue?  The paint job is a little different.  Were other cows painted like this originally?  For what business? A true mystery!

Last topic for this post.  My first “true love” wasn’t neon signs.  It was actually streamline moderne buildings.   I’ve always loved buildings.  As soon as I got my driver’s license when I was 16, I drove all over California every weekend, shooting every streamline moderne building in the AIA Guides for northern & southern CA.  Hundreds of them.  Those photos faded into nothingness and were trashed eventually.  But I guess the obsessive seed was planted at that time.

The General Motors Testing Laboratory building in Phoenix, Arizona is still there.  But the later addition sign (1953?) for the Imperial School Photography disappeared earlier this year.  I hope someone has it!

Two nice buildings in California were recently demolished.  Preservationist fought hard to save the Eugene C. Jones Veterinary Office from 1938 in West Hollywood.  Also, there’s a vacant lot there now:

A less historically significant building in Los Angeles (but I loved it just as much) was also demolished.  Vacant lot now. I don’t know what it housed originally but I always thought it had a lot of class.  I’m betting the bottom part was all continuous glass originally:

Hollywood High in Los Angeles was built in 1938 (after the previous building was demolished in the 1933 earthquake).  The buildings have lots of super details:  reliefs, borders, curves…

How on EARTH, did they allow this crap mural to be painted over the building last November?!?  “Hollywood High School recently unveiled a new community mural on campus created by Don Rimx One that celebrates the students’ diverse and collaborative spirit!”  Ugh.

At least that’s not as bad as a remodeling.  New paint can fix it one day.

Last subject for this post.  The Sears, Roebuck & Co. Building in Houston, Texas was remodeled into an unrecognizable, massive blob over the years.  From this in 1939:

But — see that black rectangle up there on the right?  That is/was a gorgeous red, porcelain enamel SEARS sign that was probably added in the 1950s.  Note the neon tubing overlay text that flashed, alternating with the Sears name and read “Open Til 9”.

When the store closed in 2018, the sign was, gasp, painted black.  The building is now being adapted for a “technology innovation center” and the sign is sitting on blocks across the street.  The owners aren’t sure what they’re going to do with it.  It’s massive so not exactly man-cave material.  So, we probably know what that means (scrapyard) or maybe re-lettered for the new building when it’s done.

That’s enough news for one post!  I’ll be back in a couple of weeks or so with more.