I’ve got a nice big batch for you.  Let’s start with this Independent Order of Odd Fellows sign in Grapevine, TX:

This one is also in Grapevine.  It looks like it’s probably a modern sign but its construction is a mystery.  Why would they lay that blank panel on top like that?

This one is on top of the Baldwin’s Restaurant in Ardmore, OK:

These modern Culligan signs are also in Ardmore: 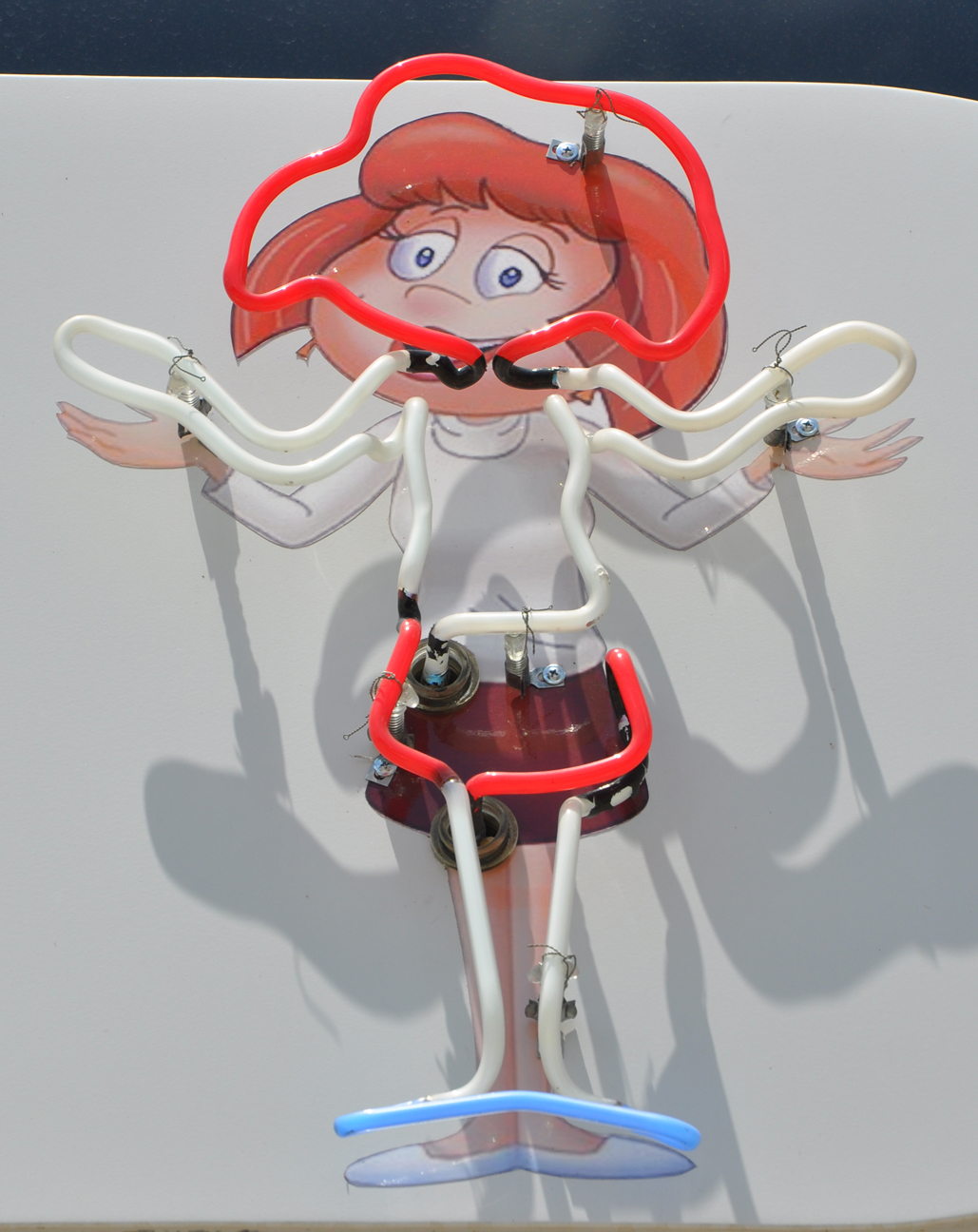 The Colvert’s Dairy Products sign in Durant, OK is still standing.  But the one in Ardmore was removed 2017.  Here’s what it looked like in 2011:

When it was removed it was carefully disassembled and put in storage at the Greater Southwest Historical Museum in Ardmore.  The museum has lots of Colvert’s stuff on display (smaller, non-neon signs, milk bottles, etc.).  They haven’t gotten an estimate for the restoration but I know it would be a fortune.  The Colvert family is now saying they might want to display the sign in town at the old family home.  We shall see…

While at the museum checking on the sign, I couldn’t resist shooting this guy:  a battery-operated Citicar from 1975.  More about these cars here:
https://en.wikipedia.org/wiki/Citicar 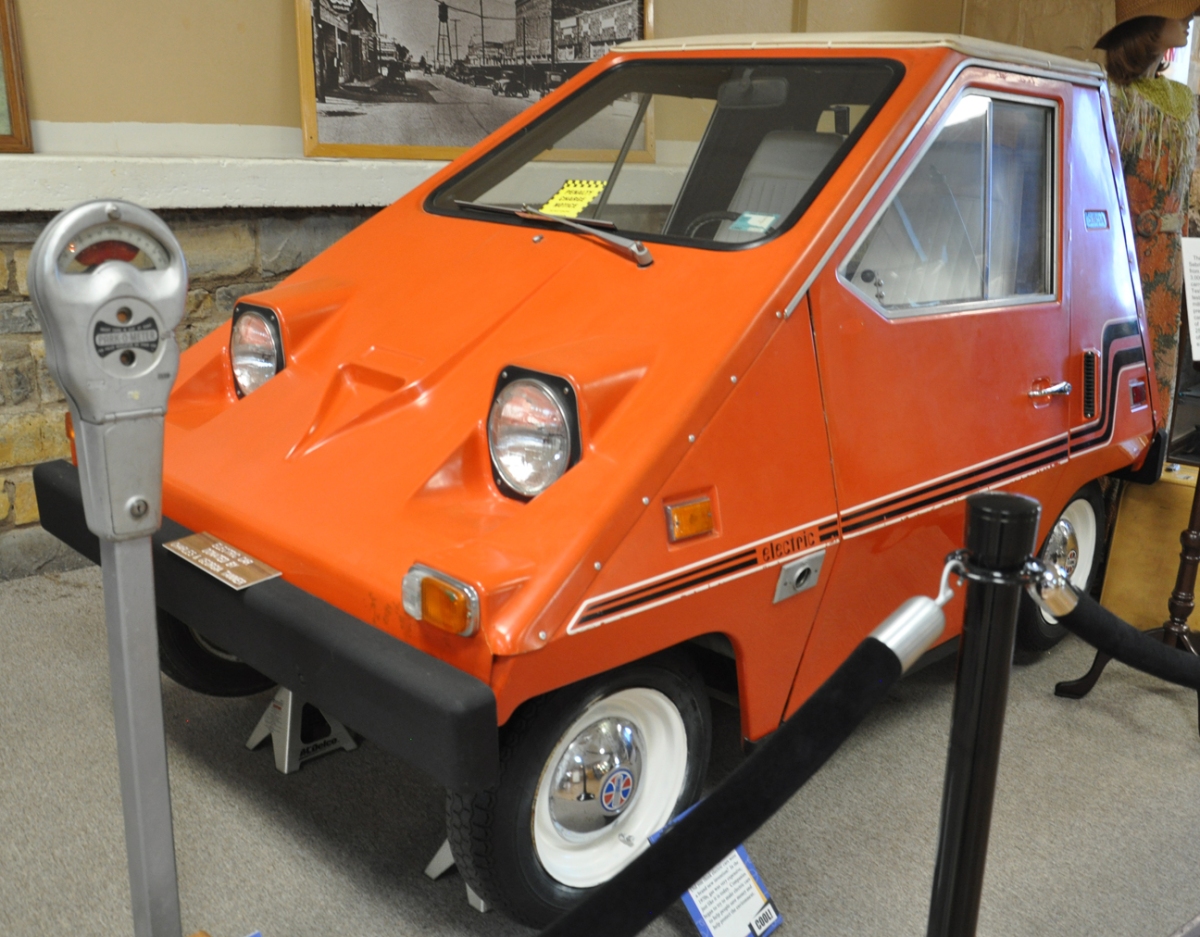 The Cloverleaf is a fun place in Ardmore with lots of statues outside.  There’s clothing and other stuff inside.  The building is painted bright pink.  Here are some other photos & more info:
https://www.onlyinyourstate.com/oklahoma/cloverleaf-store-ok/ 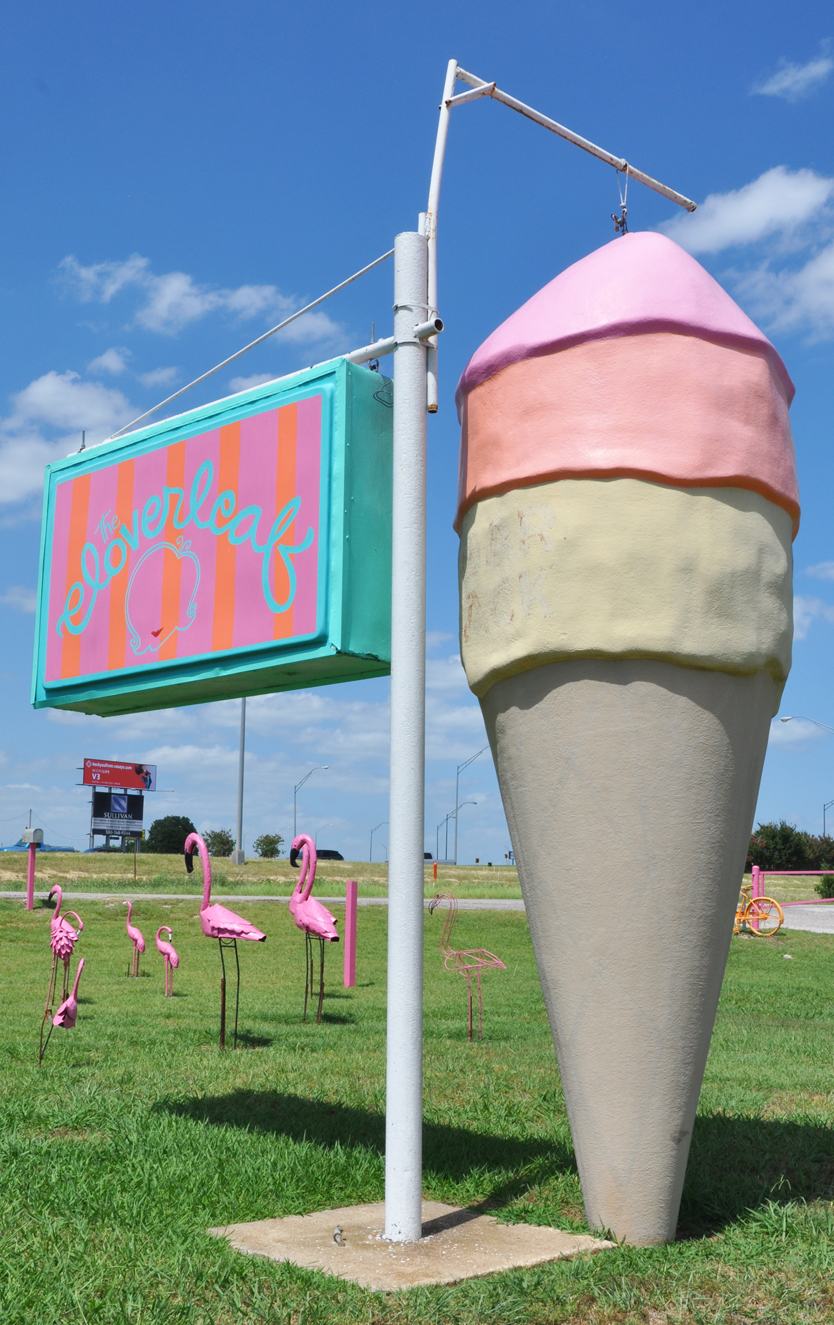 I asked the folks inside about this chicken head and they couldn’t remember where it came from: 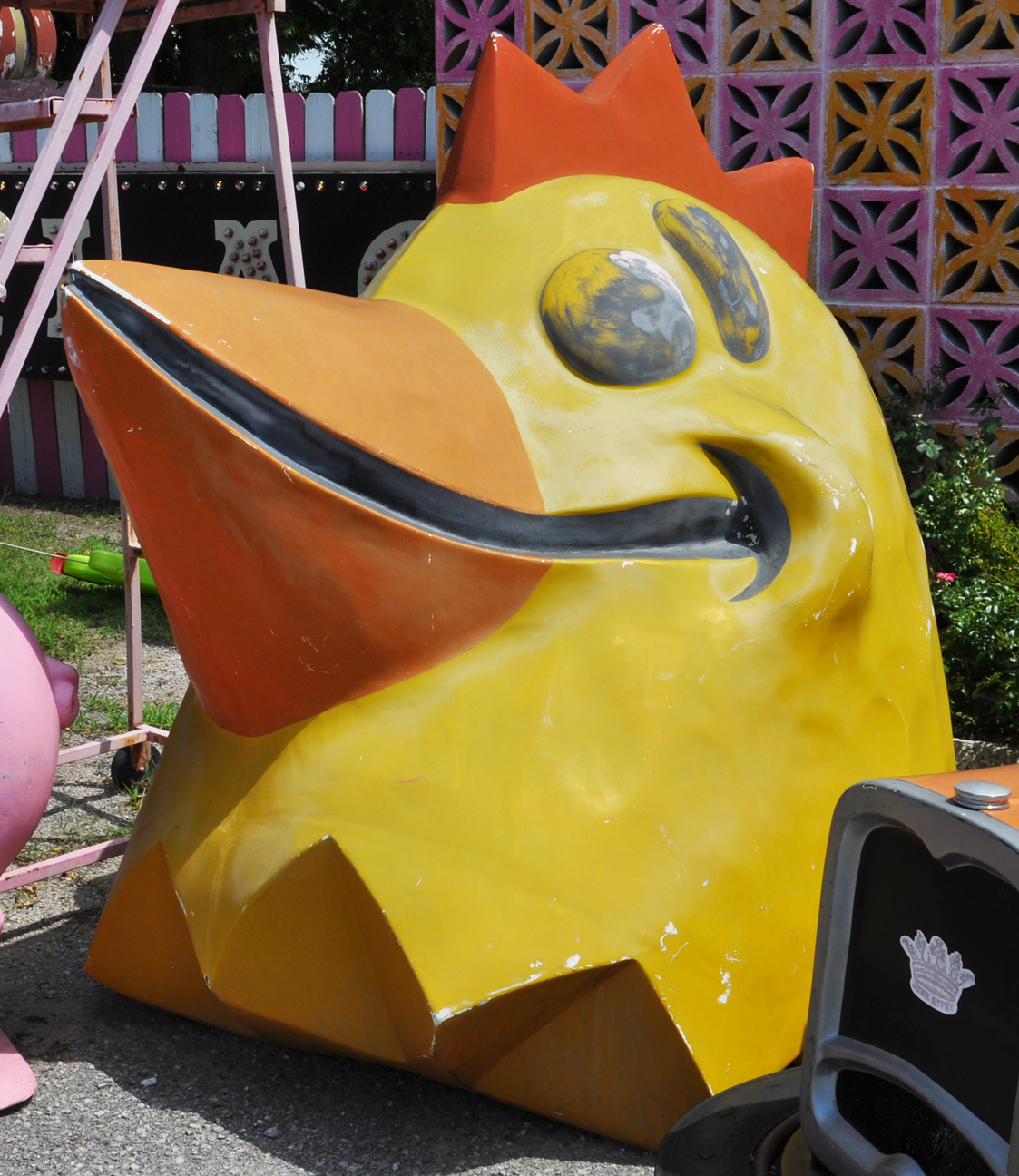 This sign is in a field in Healdton, OK — no idea what the story is.  No offices or any business nearby.  Just someone’s personal treasure:

This repurposed KFC bucket is in Gainesville, TX.  Note the red & white striped pyramid and the “Drive-Thru” signs are still there from the KFC days:

A couple of other things from Gainesville.  I shoot a LOT of mid-century modern buildings on these trips.  Probably as many as signs but the folks that follow my blog seem to prefer signs so…  Anyway, I’m including this building because it probably won’t make the cut to be added at my website but I really like those wonky details on the facade:

Just across the street in Gainesville:

Moving on to Bowie, TX.  I also shoot a lot of statues on these trips.  This guy will wind up on my Tin Men page:
http://www.roadarch.com/giants/tinmen.html 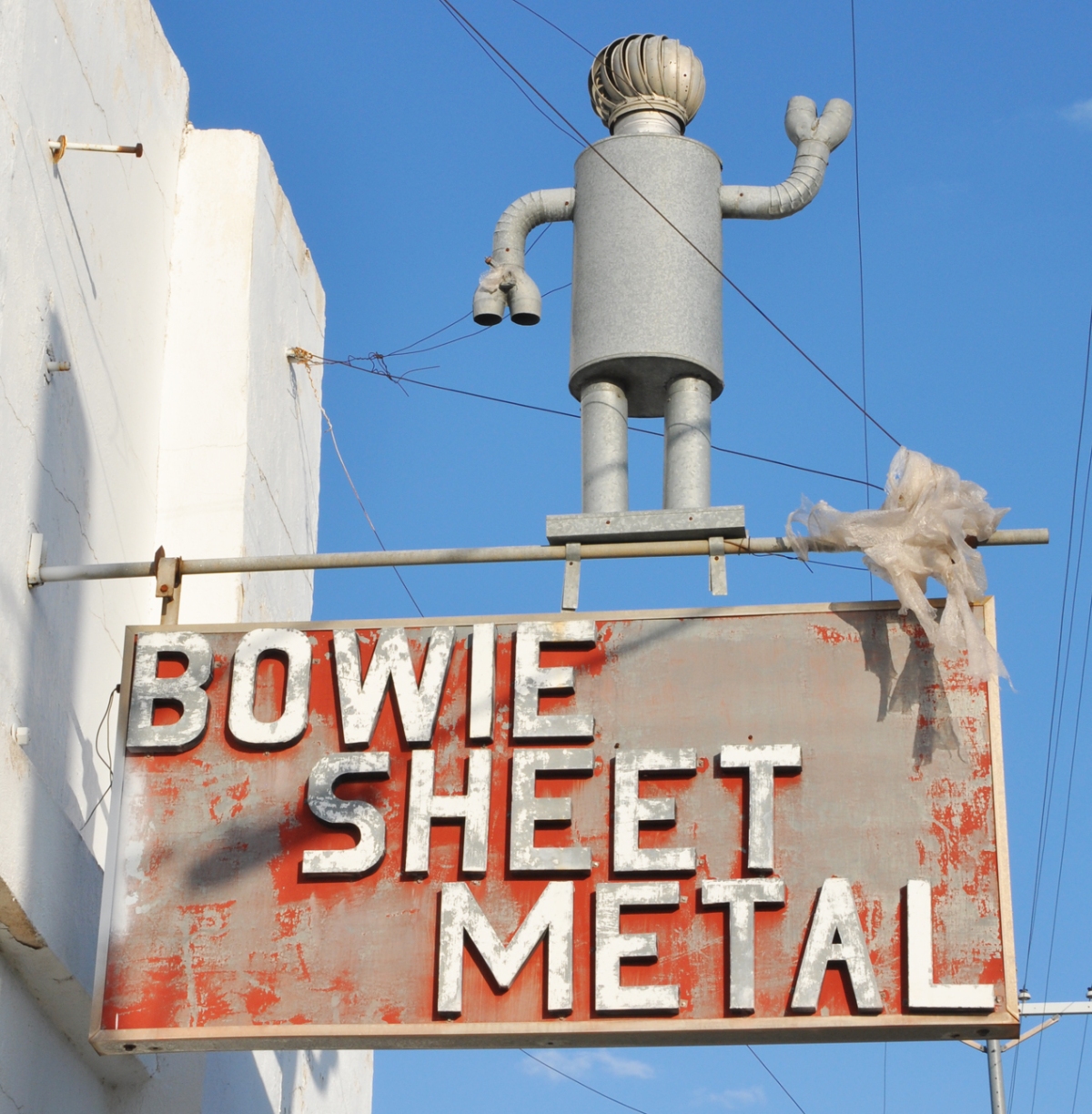 A beauty in Bowie:

The sun was going down so I got that cursed “golden hour” off-color but I had to shoot this cool guy.  He’s huge!  At the Coyote Creek Event Center in Henrietta, TX:

4 thoughts on “Day 25: Frisco, TX, some Oklahoma and on to Wichita Falls, TX”