I have officially updated my entire website, all the various sections, as best I can with info gleaned from the most current Google Street View images.  A super tedious task that’s taken every free minute of my life for months. But I take keeping my website current very seriously.  Here then, are the latest “discoveries” picking up where I left off in the “C”s from the previous posts.  I’m afraid it’s mostly bad news as there have been a lot of wonderful signs updated with simply awful backlit plastic letters.

But before we dive in… a bit of good news from the “A”s.  The Tucson Inn (in Tucson, AZ) has been purchased by a local college.  The sign will be restored.  Here’s a photo I took in 2012 (by the way, all the photos in these posts were taken by me — and are not to be lifted for Pinterest, Facebook, or any of that): 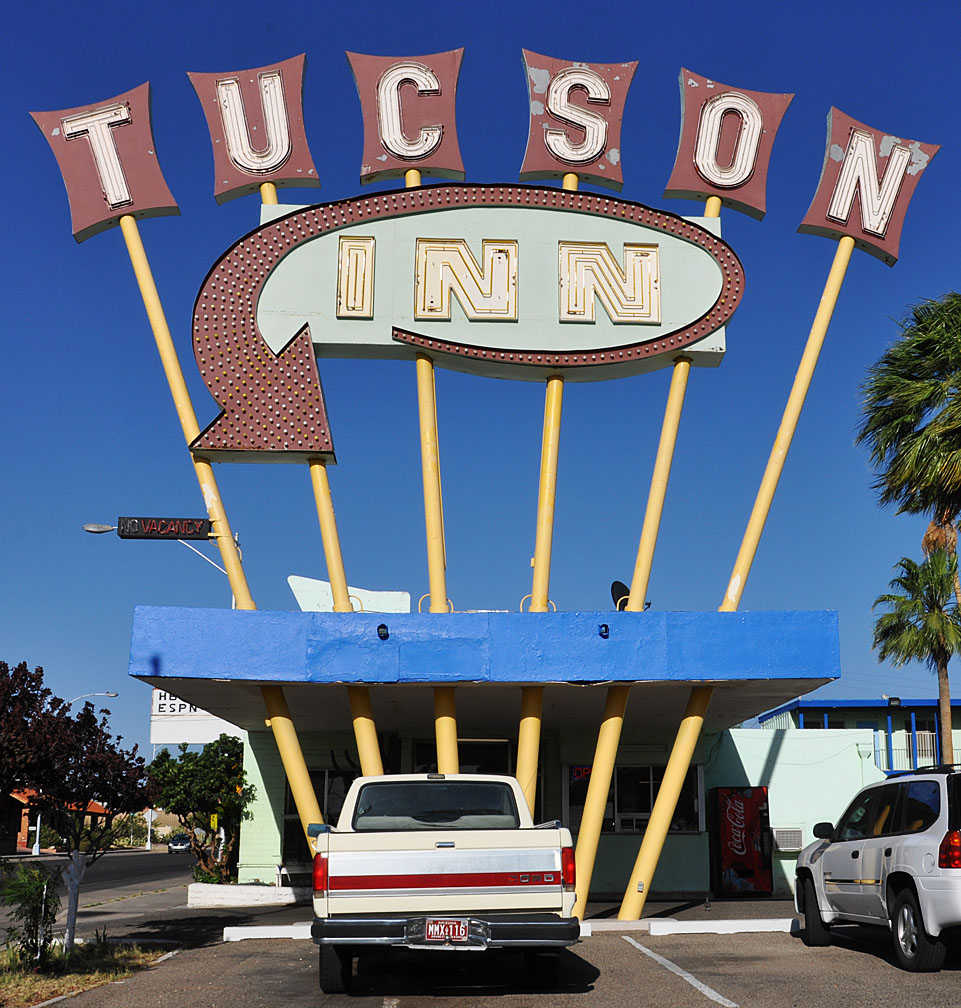 and here’s an article about the upcoming restoration:
http://www.kvoa.com/story/37354123/pcc-buys-historic-tucson-inn-for-over-1-million

CANADA
The Motel Carnaval in L’Ancienne-Lorette, Quebec was demolished last year and the sign is gone now, too: 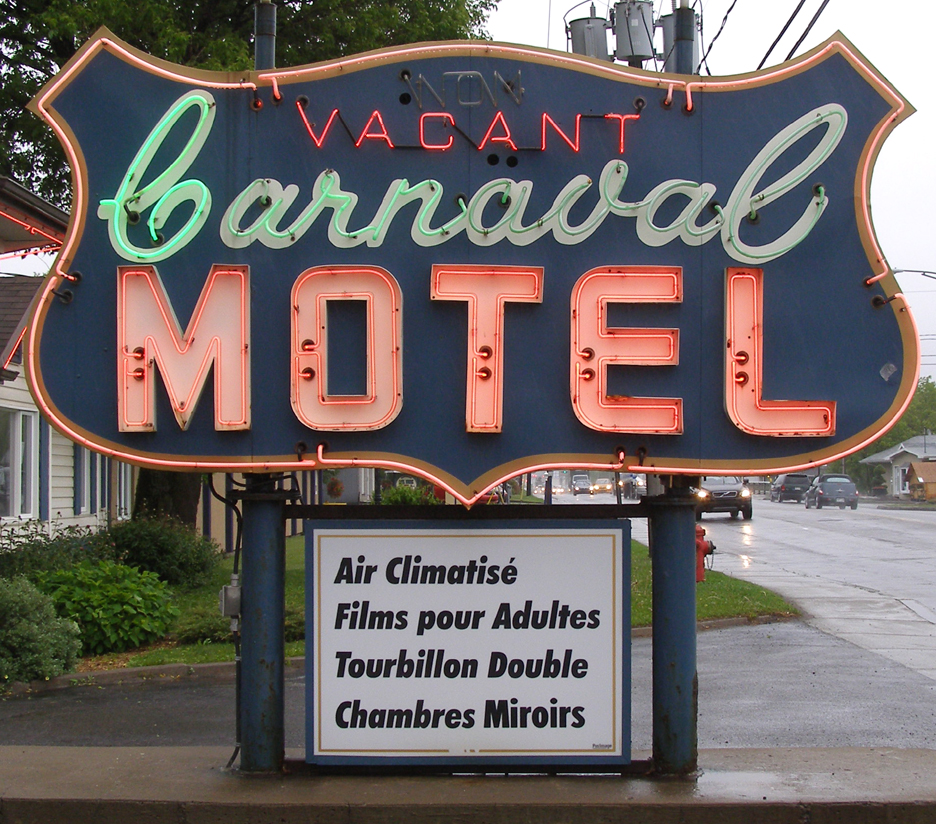 The Triangle Liquors building in Arvada, CO has been demolished and the sign is gone:

The Hi-Lo Market signs in Commerce City have been adapted for a Save-A-Lot Food Store.  Here they were in 2012 — even without their neon, they were glorious: 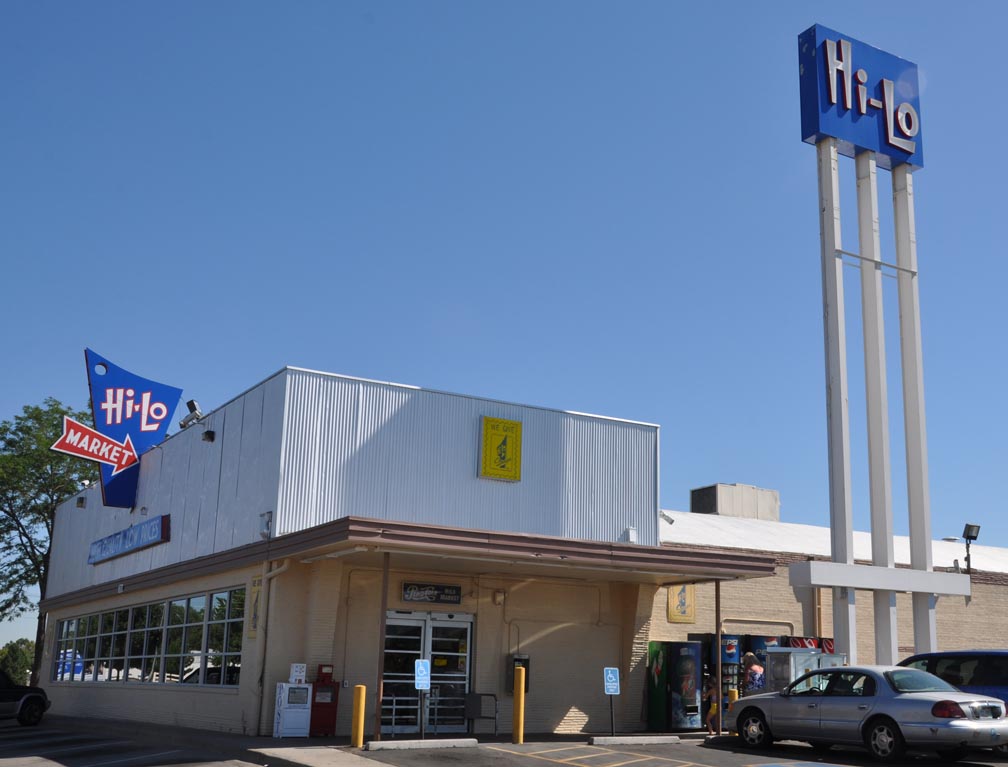 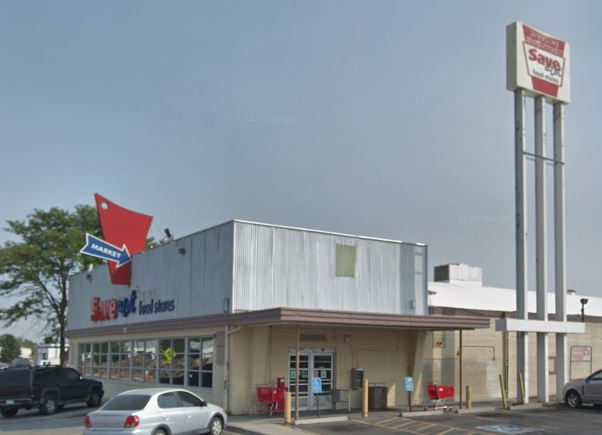 Merrill Axle & Wheel in Pueblo, CO has closed and the pole sign and freestanding letters are gone:

The Broadway Motel in Denver was demolished last year and the sign is gone:

A little good news:  The Lake Steam Baths sign in Denver appears to have been restored and those god-awful clear plastic panels have been removed.  From 2012: 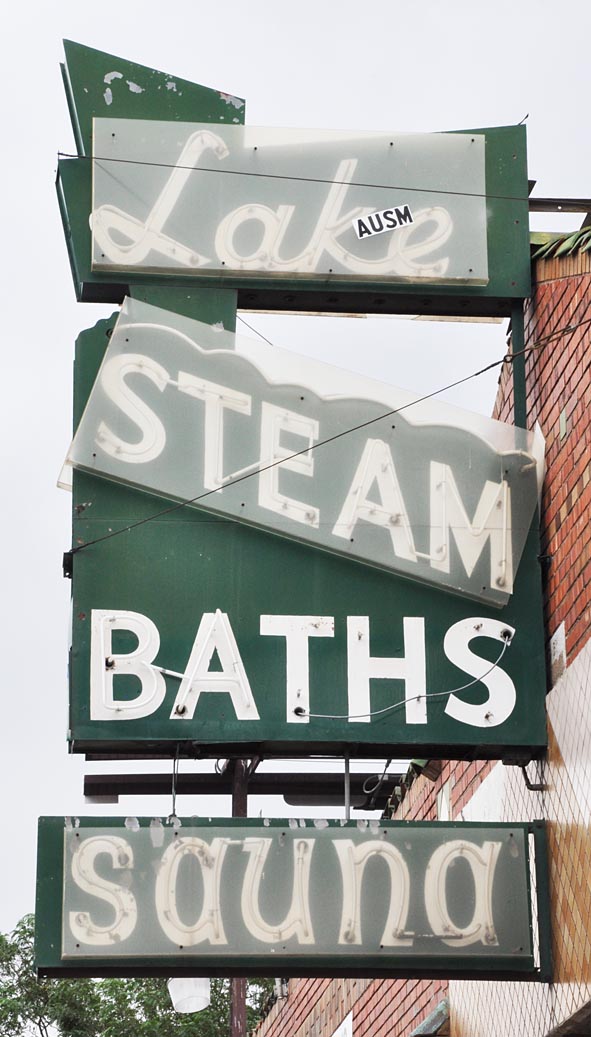 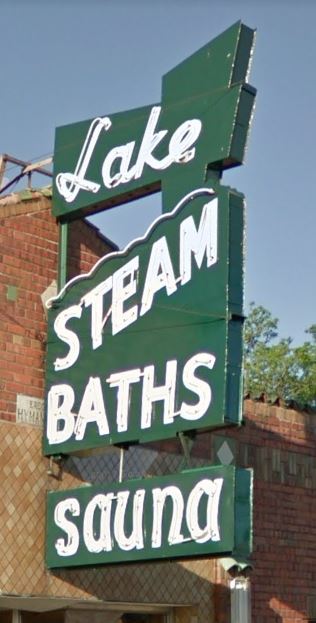 While on the subject of Denver, if you didn’t know yet, the bulbs on the Satire Lounge sign are chasing again.  The Pete’s Kitchen sign’s pancakes are animated again now, too.  Both businesses are owned by the same guy who got a city variance to get them moving again:
http://www.9news.com/article/news/local/next/restaurants-on-east-colfax-will-get-back-their-flashing-neon-signs/485773244

The Battiston’s sign in Avon, CT has been replaced with new panels & backlit plastic letters.  Here’s the sign in 2010: 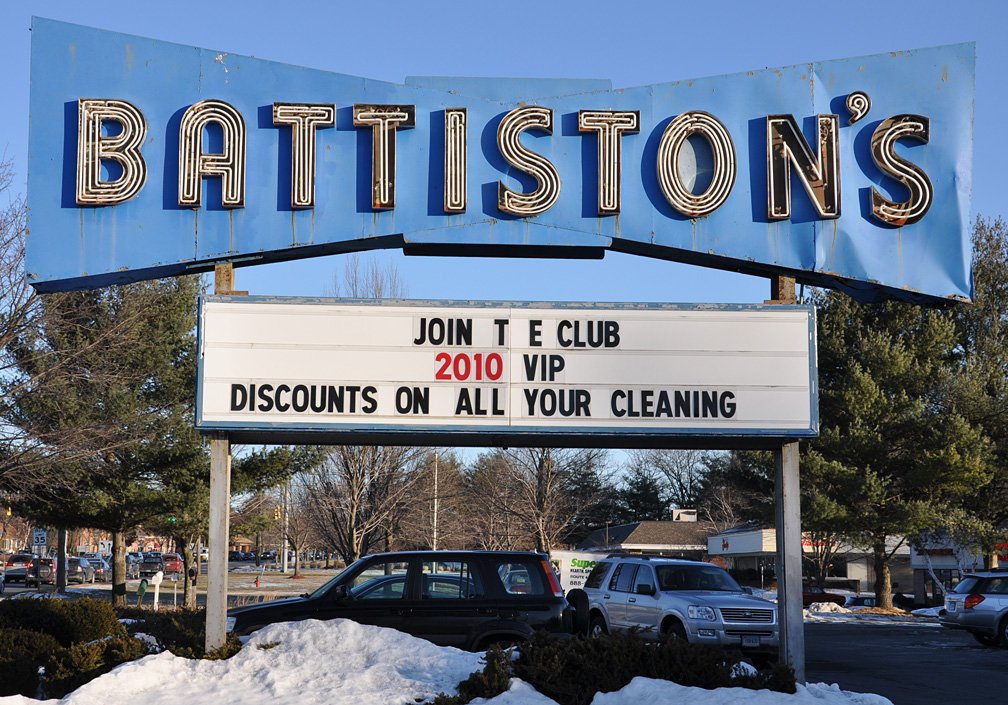 The fun rockets in Kissimmee, FL were removed in 2016.  A super boring sign there now (I’ll spare you): 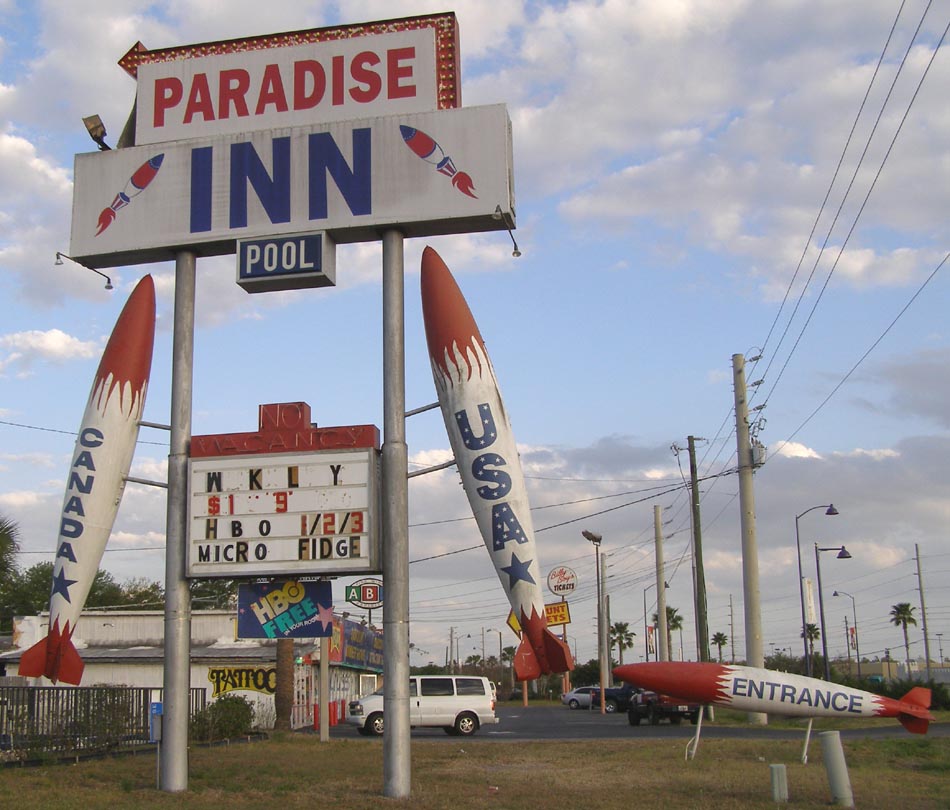 The World Liquors sign in St. Petersburg, FL won’t be around much longer.  The property’s been sold and the sign will be auctioned off.  The owner wants the money to go to a charity.  The biggest price is more important to him than the sign being preserved on view locally or going to a museum (yes, Tod at the American Sign Museum talked to him):

The Brahman Lounge & Liquors sign in Tampa was repainted around 2016.  Here’s the “before” shot: 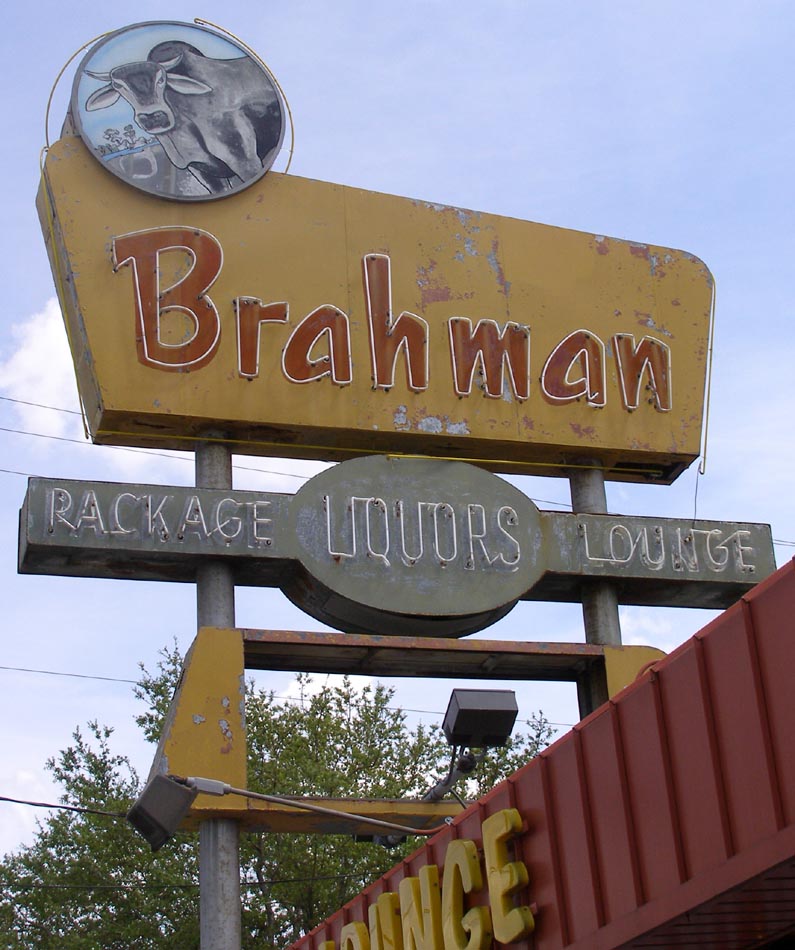 and the “after” — the nice patina is gone, but the neon and bull are still there so…:

I’ll move on to the “I”s and onward in another post tomorrow night.