I’ve been continuing to update the Signs section at my website (RoadsideArchitecture.com).  So many signs have been removed in the past couple of years that I can’t begin to fit them into a post or two.

Let’s start off with this painful shocker.  Just this week, the towering Sunland Motel sign in Mesa, AZ was removed and replaced with a boring, little backlit plastic box sun (I’ll spare you the photo of that).  Here’s what was lost – my photos from 2012:

Recent news from Stockton, CA.  The Lincoln Center sign is being redone.  Here’s the article:
http://www.recordnet.com/news/20161225/fitzs-stockton-sign-goes-to-l-and-back

Here’s the sign — the “L” composed of scintillating and flashing bulbs on one side, with neon on the other.  My photo from 2014:

Here’s a quickie video that I shot which shows the revolving sign at night — and the flashing bulbs:
https://www.youtube.com/watch?v=PANrHbhTjgg&list=UU-YkUPfbb5bC5rI7RsFH1Ng

And here’s the artist’s illustration of what the sign will look like later this week — with the backlit plastic “L” on both sides and the new digital message board below:

More sign losses, if you can bear it.   The Corn Palace sign in Mitchell, SD was replaced about a year ago with a backlit plastic box sign.  One of the plastic onion domes (a reference to the Corn Palace building in town) had been taken out during a storm in 2012.  I guess the decision was made to just replace the whole darn thing with something cheaper/easier to maintain.  My photo from 2006:

The Men’s Club sign in Chickasha, OK disappeared sometime after 2013.  I sure hope someone saved it.  The snooker balls were composed of light bulbs.  My photo from 2011: 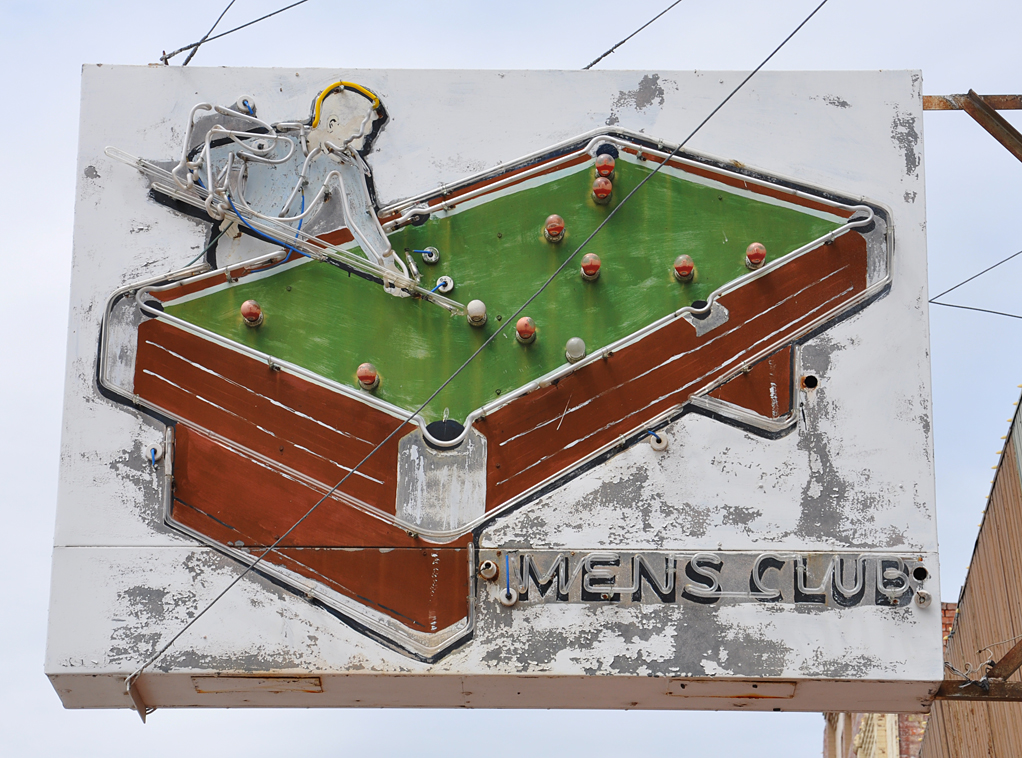 There have been a lot of recent losses in Pennsylvania.  The Donahue’s Hour Glass sign in Wilkes-Barre was removed about a year ago during a “remodeling”.  I’m pretty sure it’s gone for good.  My photo from 2010:

The Pep Bar in Harrisburg is gone and so is the sign.  My photo from 2012:

This Philadelphia Electric Company bulb sign disappeared about a year ago.  My photo from 2010: 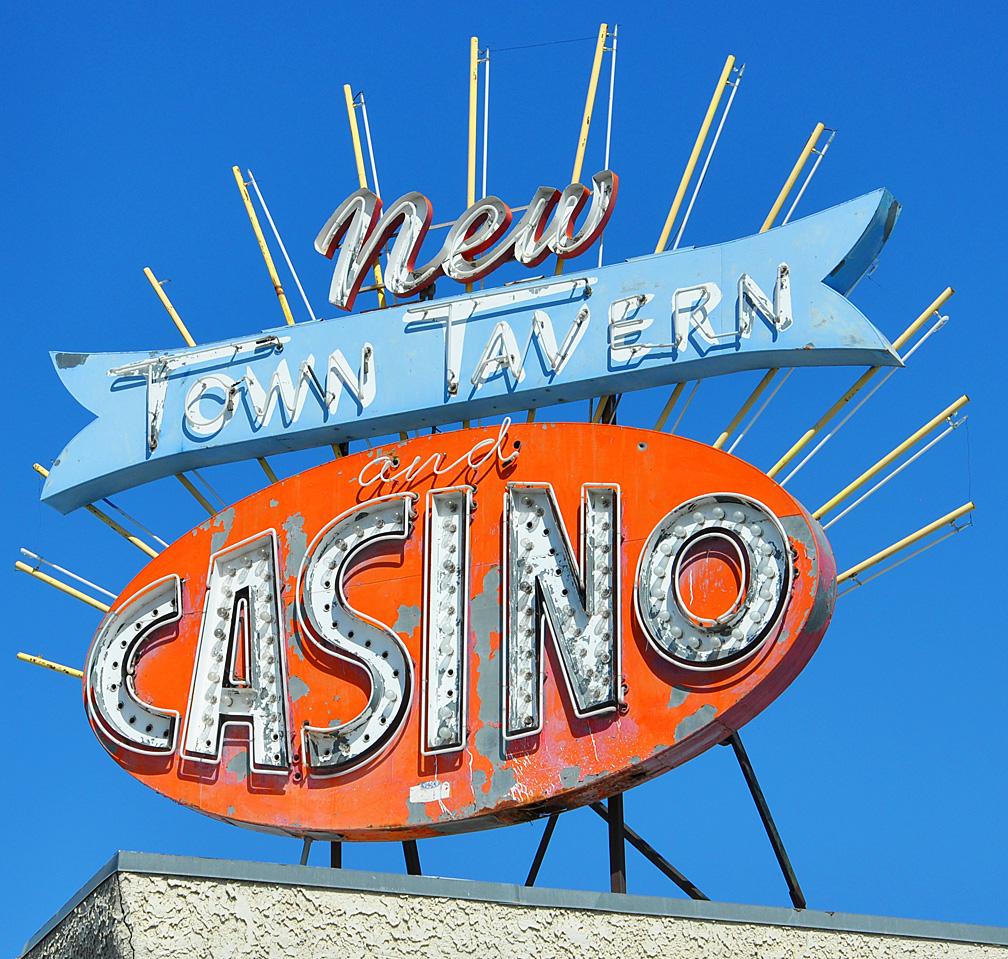 It’s not as nice now but it’s better than being scrapped.  From Google Street View a few months ago:

Another bit of Vegas news — the Strip 91 Motel sign was removed about a year ago.  It is now being stored by The Neon Museum in town.  So, it may reappear someday.  Restoring this big sign will be costly.  My photo from 2014 (Sparkle says “hi”):

Then, last year, the sign disappeared and, by earlier this year, there was a vacant lot where the market had been.

This one’s very upsetting to me.  In all my recent 32 years of living in NYC, I never did shoot the Lascoff Drugs sign.  I don’t know why.  In a town with so little neon, I just ignored things there I guess.  It was incredible with its beaded tin border, applied letters, caduceus, and repair ladders.  Photo from Google Street View in 2011: 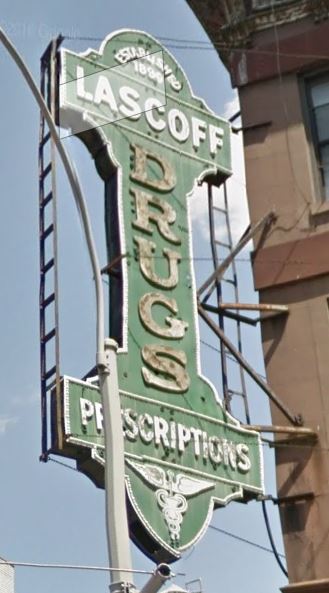 Then, after 113 years in business, the store closed in 2012.  The “Lascoff Drugs” letters were removed by the following year.  In 2014, it was adapted for a Warby Parker eyeglass store.  I’m trying to see the glass half full here — but that sign should NEVER have been touched.  [Google Street View: 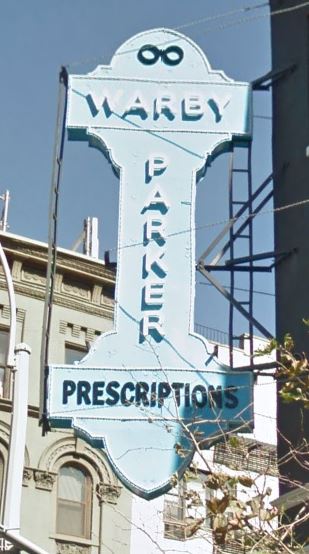 Another sign that should have been declared historic and never touched is this one in Henderson, KY.  My photo from 2010:

Alas, the neon was removed and the sign was painted over by 2012 as revealed by the latest Google Street View photo: 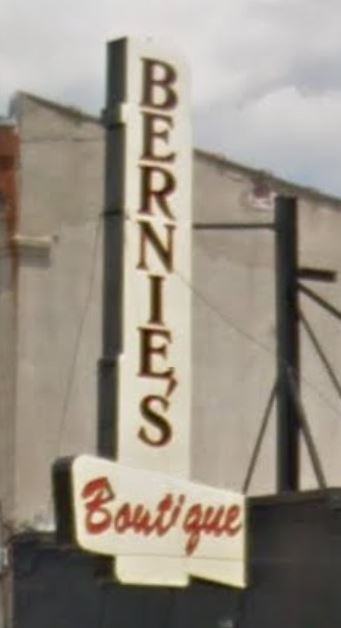 The best news I have at the moment and I have mixed feelings about it.  The House of Doors sign Brookfield, IL was replaced with a replica sign a year ago: 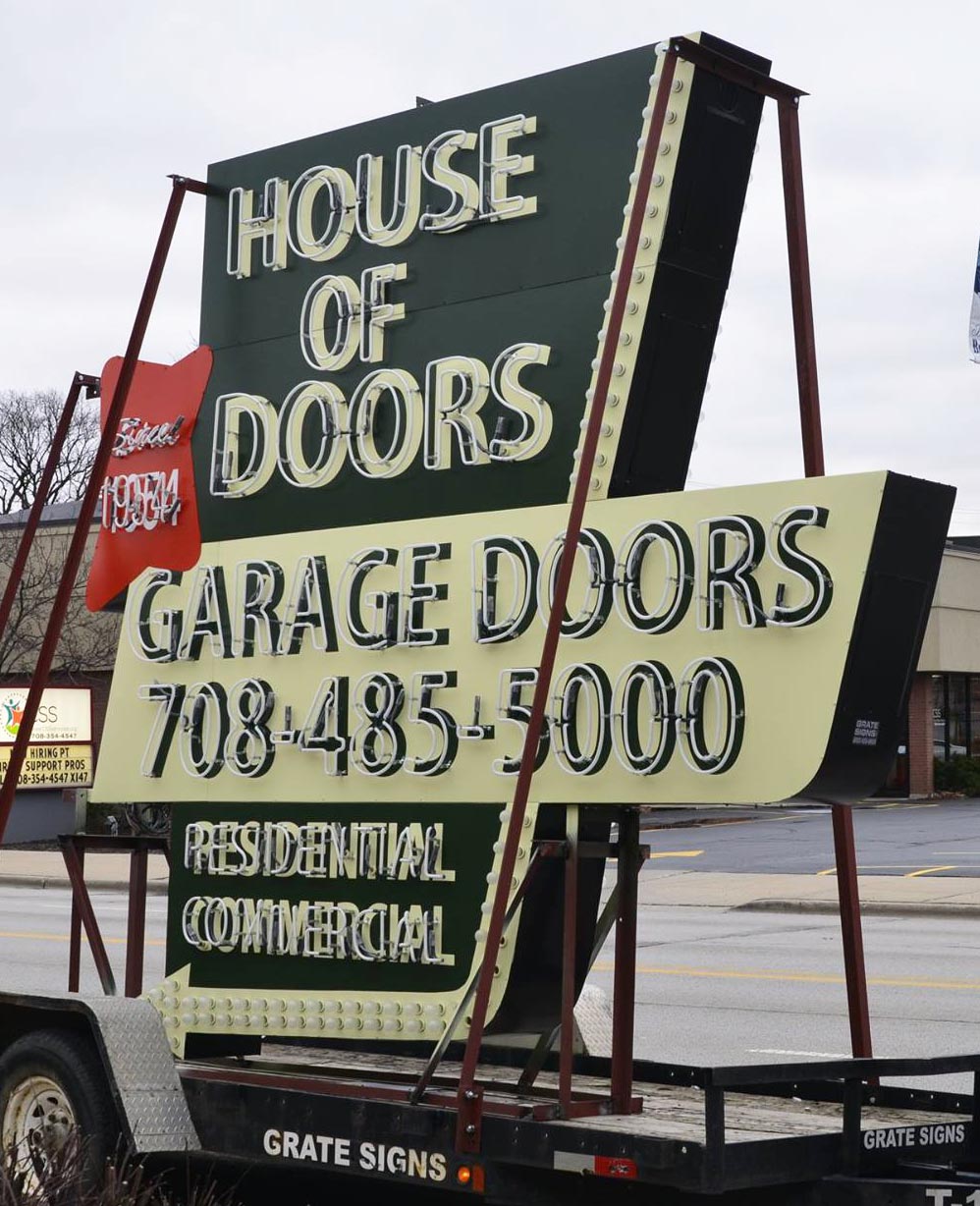 Back later today with “Part 2”.