It is very dusty there in Fresno and southward.  The dogs really missed the grassy lawns & hard-packed beach sand.  Poor Nik had mouth fulls of dirt from his compulsive ball-retrieving.  And the other dogs got stickers in their feet.  If dogs could curse…  But we’re back home now.  I managed to get through a huge list of stuff on this trip so I’ll be busy adding stuff to the website for a few weeks.

I’ve been very anxious to update the photos at my website for this one.  Here’s what Mearle’s Drive-in in Visalia looked like in 2008: 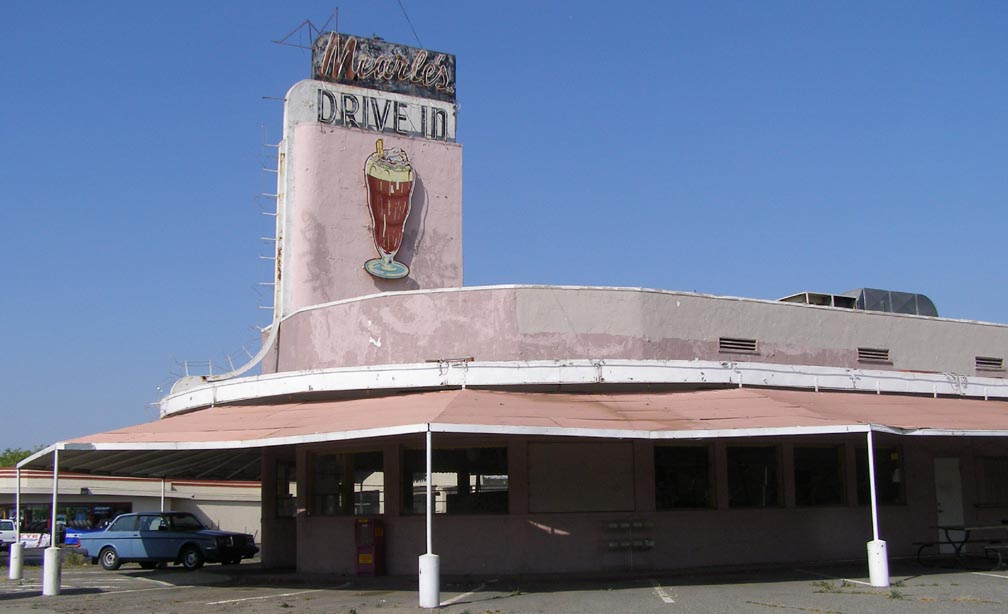 It was built in 1940 and then closed in 2006.  It seemed doomed to the wrecking ball.  Finally, in 2011, it was transformed & reopened as a Habit Burger Grill location: 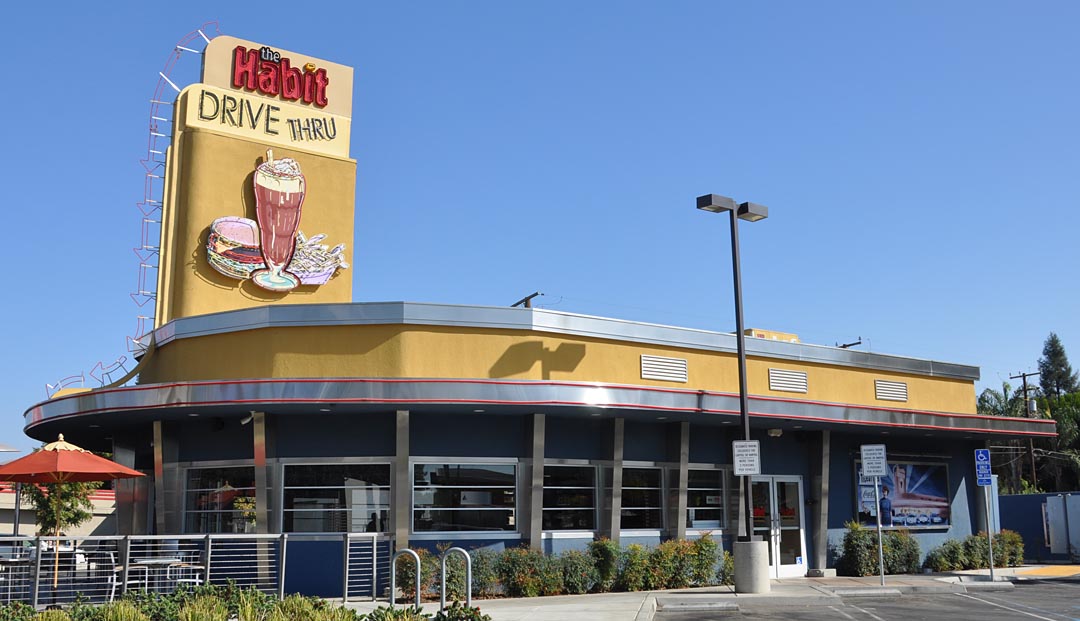 I don’t know if the milk shake sign is the restored original or a replica.  I got a peek at the original “Mearle’s” & “Drive-in” signs from the top of the pylon.  They are currently in storage at the Tulare County Historical Society museum in Visalia.  There are plans to restore the signs — but no timeframe yet.  It’s not known if they will be installed inside or outside the museum.

Just across the street from Mearle’s is the COS (College of the Sequoias) Giant — carved in the 1950s.  A neat little video about the making of the sculpture is here:
http://www.coscampusonline.com/2012/09/27/a-giant-discovery-of-a-piece-of-cos-history/

Another sign from Visalia — note the fun flair on the sign pole as well.  Apparently, the “Frank’s” piece revolved since I have seen a photo of it in a different position:

Another from Visalia — a mid-century looking metal screen above a Main Street business:

This is all that’s left of this drive-in in Visalia.  A big empty lot there now:

A wonderfully busy sign from Tulare.  I don’t know what this originally advertised for: 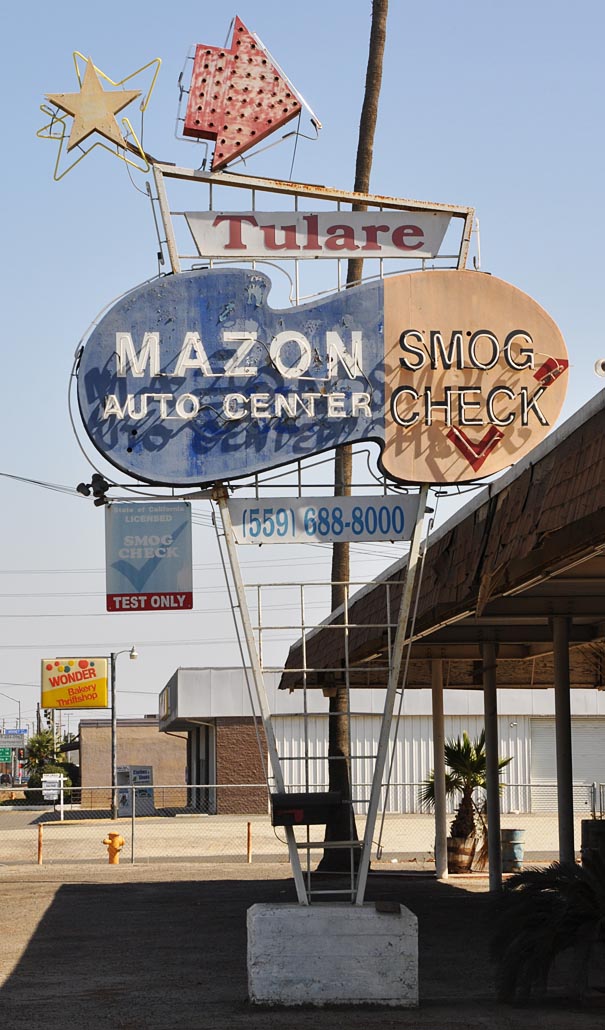 Be grateful to Tulare Natural Stone for painting over rather than trashing this one:

Canby’s Air Conditioning & Heating has been here since 1938.  The building was originally a dance hall.  But I think this styling is all Canby’s doing:

Also in Tulare.  Not the neon glitz of the Rice Bowl in Lompoc (probably no relation) which I posted about on Saturday — but this is still wonderful in its own right:

Grem has been using Nik as her hot water bottle sofa for years.  It seems her new little brother, Griz, has the same tolerance:

If you want more doggie photos, I got a friend to take a bunch of me & the kids last weekend & posted them at the top of this page:
http://www.agilitynut.com/4gdf.html

Moving on to Porterville — 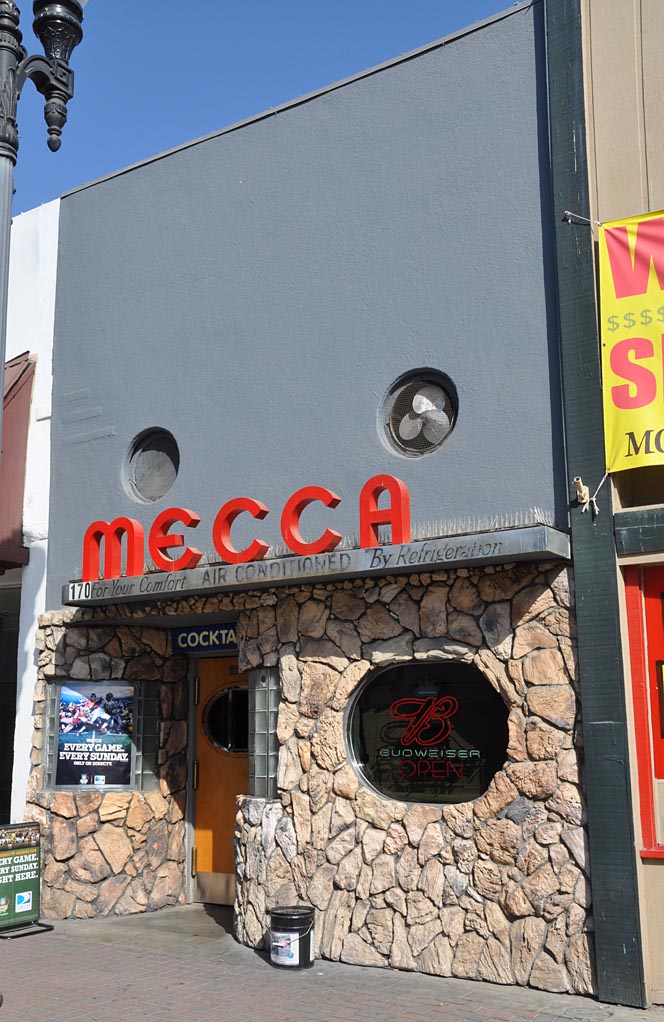 On to Delano.  The building is long gone —  just another dusty field good for dog running & sniffing.  I guess it’s too much trouble to remove this giant sign:

Another rusty crusty — from McFarland:

I showed my support — it might be the last hot roadtrip excuse for ice cream this year.  Strawberry sundae.  It was a little disappointing.  The ice cream was a bit granular/crunchy.  Ice milk I think.  But I gobbled it down & the dogs didn’t complain either:

Also from Wasco.  There must have been more text to this sign — and probably lime green not the original color:

The last photo for the day — from Bakersfield.  “Sub Bourbon Liquors”?  For a change, this sign has a lot more character than it must have had originally!

Alright then — I hope you enjoyed tagging along this weekend.  I’ll be settling in at home for a while.  Contemplating whether do go north or south for the next trip.  But you probably won’t hear from me til November.

Don’t forget, there are more photos from this trip over at Flickr:
http://www.flickr.com/photos/agilitynut/

5 thoughts on “Kickin’ Up Dust in the Central Valley”