The dogs & I are back home safe now — thoroughly exhausted from the heat, driving, and beach romps.  I still have some stuff from L.A. & Orange Counties to shoot but they’ll have to wait til October.  I’m going to hunker down and work on the website and other projects for a few weeks.  I’d like to catch up on adding the photos (about 500 of them) from all these mini trips.   Then, I’d like to do some central California and a San Diego trip soon.

I forced myself to stop shooting around 3 pm yesterday (Sunday) since I wanted to beat some of the traffic getting home.  So not the usual prolific-ness but I still plenty of things to share with you.

Let’s start with this tent-like building from Costa Mesa.  This was probably always a car dealership since this stretch of Harbor Blvd. is full of them.

Another one from Costa Mesa — the Ala Moana Apartments.  Below that soaring A-frame is a little bridge over a little trickle of water from a lava rock fountain.  Then, of course, like most of these mid-century “Poly Pop” buildings, you have the central courtyard pool straight ahead.  With a few tiki totem poles scattered about:

From San Clemente in the fog — a well-preserved Denny’s sign:

and its companion boomerang-roof building:

Moving on to Corona del Mar:

Also in Corona del Mar — this See’s Candies location opened in 1956.  Yesterday was Mary See’s birthday — so the employees were all wearing little paper hats.  Mary observed from her portrait inside on the far right.  And I went ahead and indulged in a small bag of Bridge Mix.  A nice little mix of milk and dark, caramels, nuts & raisins.  OMG, these candies are to DIE for! 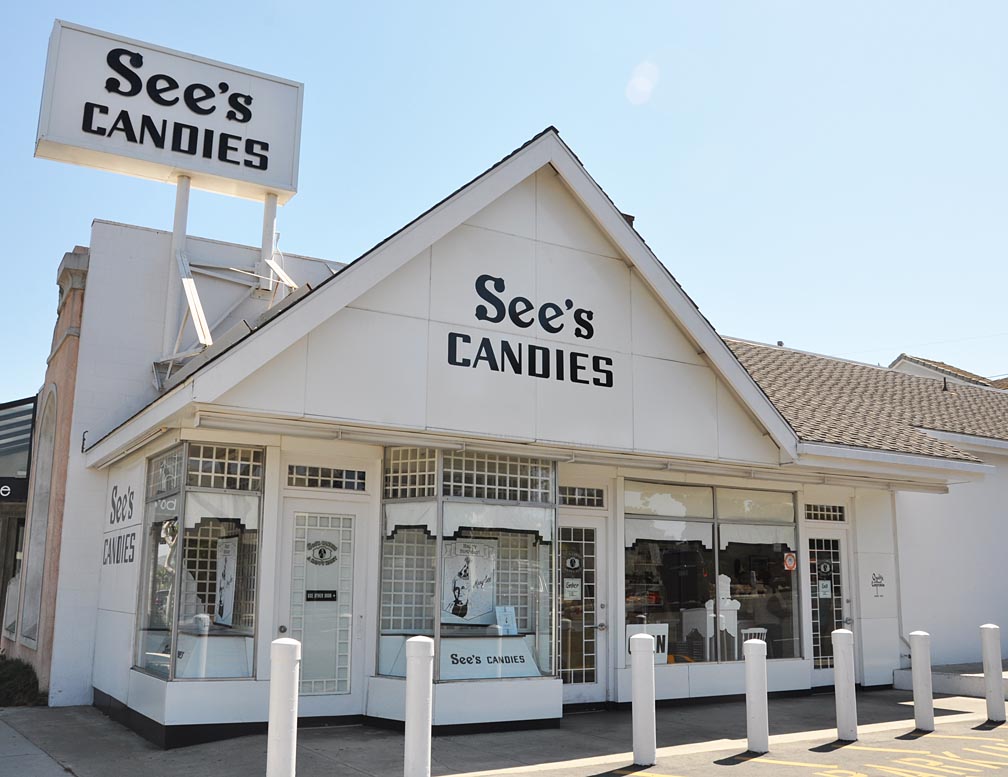 Some depressing news — this is what’s become of the Port Theatre in Corona Del Mar.  My two photos below from 2008 show it when the building still had some integrity and that nice neon sign with the sailing ship:

And today with the tacky slipcover & LED marquee on the building and the hideously recreated backlit plastic sign.  OK, yes, it’s good that it’s still a theatre and not a church (as so many former theatres are now).  And maybe that slipcover can be removed and improved upon someday.

Moving on to Newport Beach — this is what this building looked like in 2008:

And now — boarded up & vacant:

I’ve never been able to get the history of this building — other than that it was the Bubbles Balboa Club in the mid-1980s.  When that closed, it became the Bubbles Art Gallery.  I don’t know if this was originally a Streamline Moderne probably 1940s building — or if it was just a Disney-like impersonation of one.

A couple more photos from Newport Beach before I close out this post.  According to a plaque, this sign was built in 1933 and then restored in 2009.  “Restoration” means different things to different people.  I think in this case, we’re talking recreated or at least repainted panels and new neon.  I have never seen a night photo of the sign so I suspect it’s no longer lit.   I wish I knew more about this sign and what it advertised.  Like, if this was a kiddie ride sort of thing or if it was truly a boat rental business.  Today, the sign is located right next to the ferry to Balboa Island — and just a few steps away from all sorts of rides and food stands:

And a nice little rusty crusty just a couple hundred feet away:

So, I’ll be pounding on the laptop for a few weeks — working on the website.  Come visit sometime as there’s loads of new California stuff scattered about at various sections:
http://www.RoadsideArchitecture.com

and don’t forget there are also other new photos over at Flickr from this weekend:
http://www.flickr.com/photos/agilitynut/