I got an early start in Santa Monica this morning — no “marine layer” (fog) for a change.  I fooled around with email a bit too long and didn’t get the dogs to the beach at 6:30 (illegal but usually fine).  But I stumbled upon a pristine park on Pico — no signs saying “no dogs”.  Let them run around chasing balls & frisbees for about 15 mins and just as I was leaving — busted!  The cop was nice — but not nice enough.  She only cited me for two dogs instead of four — $35 per dog “plus court fees” (whatever that is).  I’m figuring $100 total?  As for no signs — she said it’s common sense.  And evidently, there’s only one dog park in Santa Monica — but we’re not welcome there because we’re not residents.  Wow.

Anyhow — let’s get rolling.  Callahan’s looking as wonderful as ever: 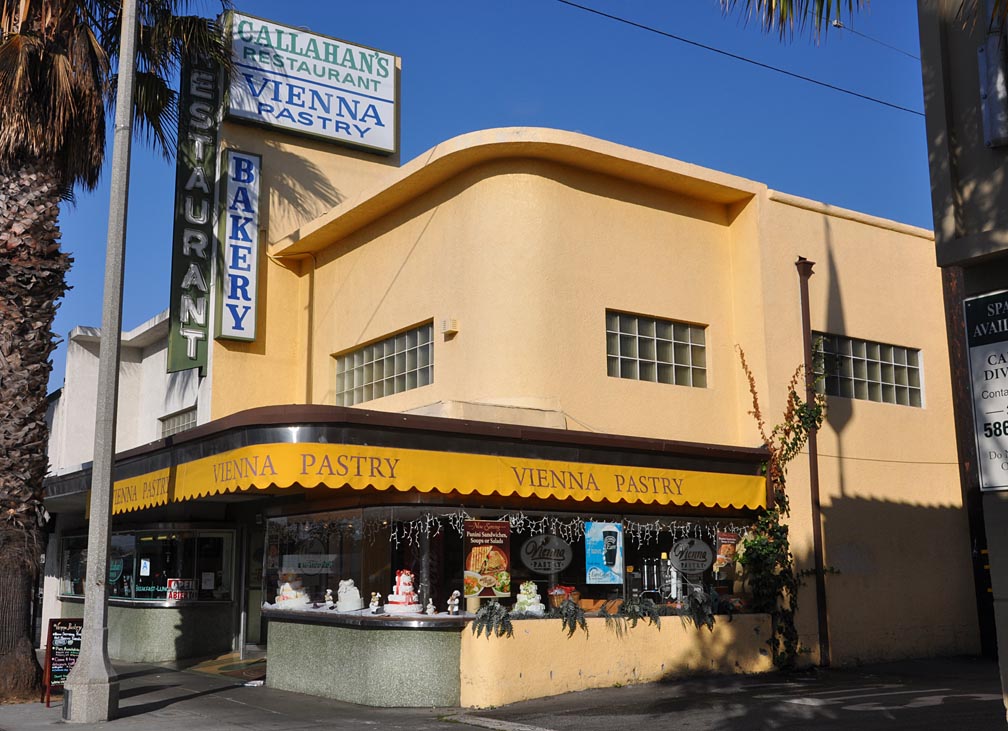 I had to throw them some support.  Although I barely eat sugar at all these days, I know my blog fans insist that I break the rules on roadtrips.  So…   Not very Viennese-y — but it looked too much like one of my fave pastries back in NYC at my beloved Connecticut Muffin.  There, you had an option of apple or cream cheese.  I confess, I usually got the cream cheese filling.  This one from Callahan’s was apple.  And with a thicker crust.  I’d say like eating a mini apple pie. 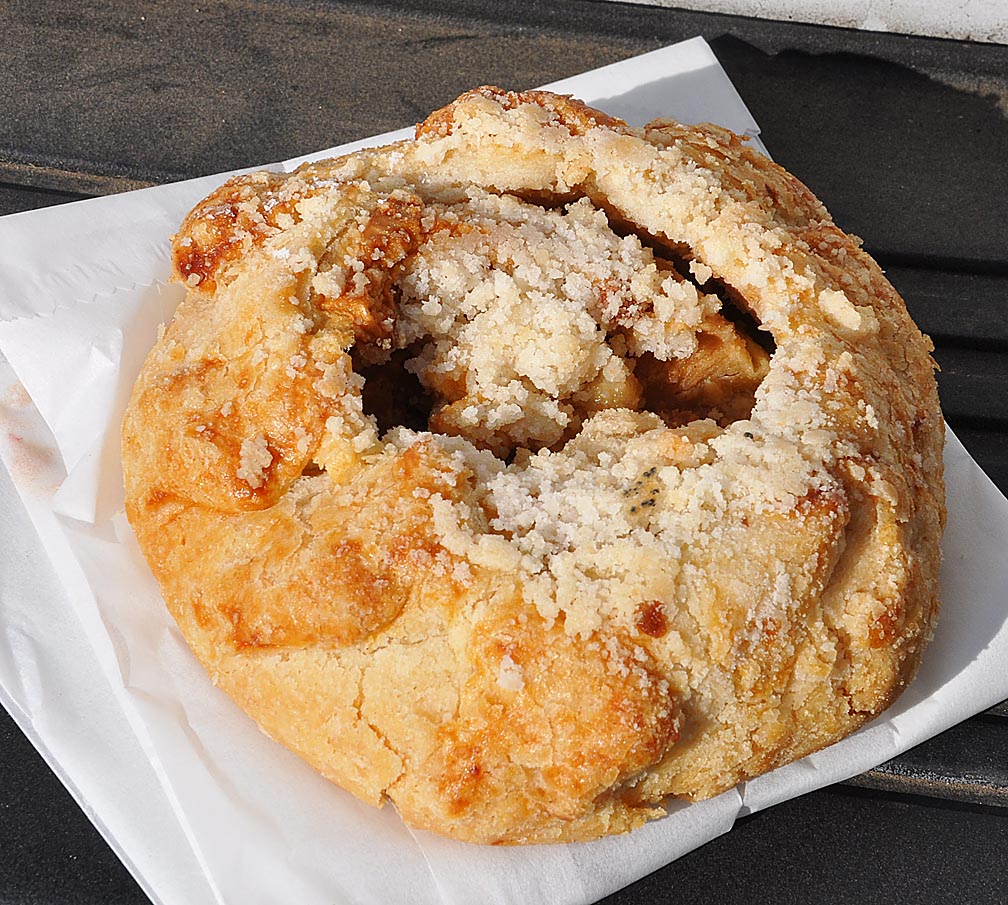 On to L.A.  This from that little section between Beverly Hills and Hollywood with lots of Jewish businesses like these.  Glad to see that Charlie’s is still open and this sign is still there.  Unfortunately, the sign’s buddy “Beverly Wood” here in this 2008 photo, has been whitewashed (painted over with white paint):
http://www.agilitynut.com/08/4/bevwood.jpg 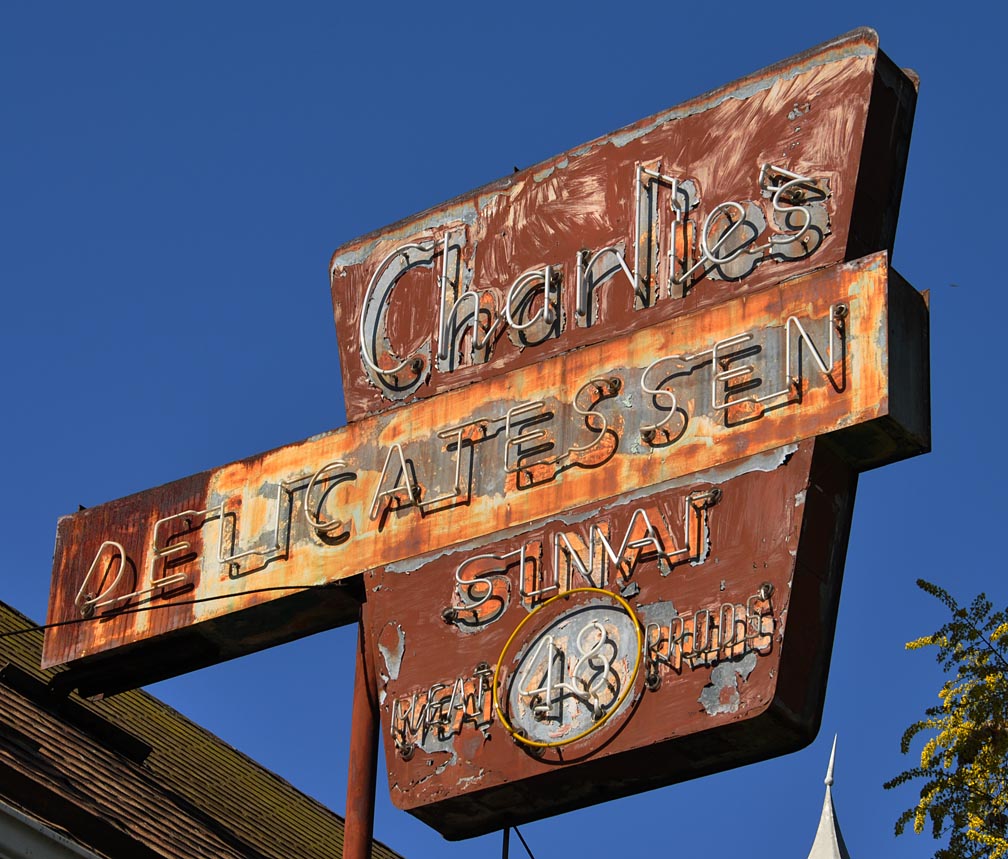 Just down the block and soon to be no more.  Big “available sign” in the window.  And I’m sure nobody will feel as sentimental as we do when a new biz moves in.  Plastic signs rarely get any respect:

Maybe West Hollywood at this point.  A whimsical sign that makes you pause.  I have practically nothing and am just fine with it.  If you want to know more about “Free Humanity”, I dug up this link:
http://dailytrojan.com/2012/04/16/free-humanity-pushes-artistic-limits/ 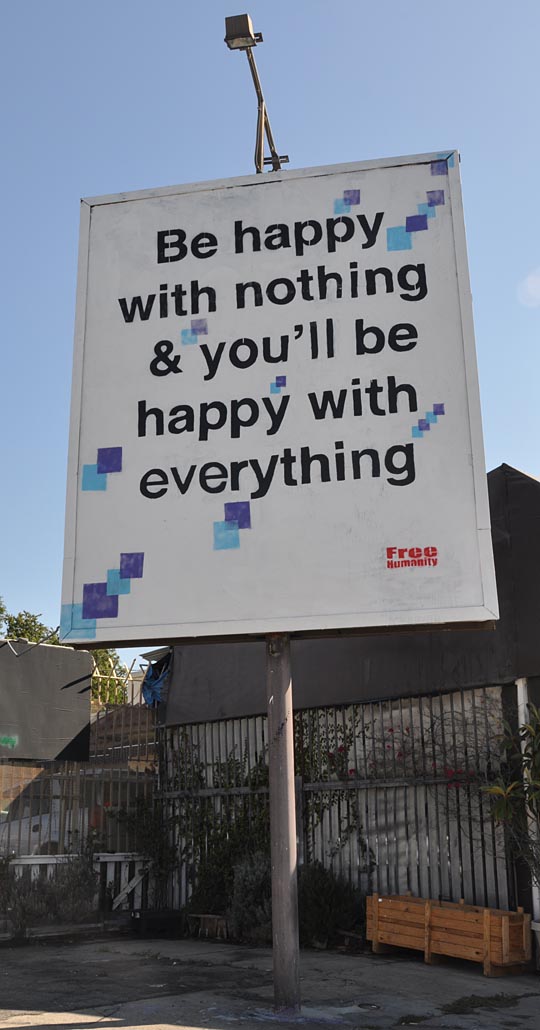 On to Hollywood.  I don’t know if Purple Man (yes, his skin was incredibly purple) is a fixture on Hollywood Blvd — but nobody was paying any attention to him.  So I just had to take his photo & make him happy.  I wondered what was in his shopping cart but didn’t stick around long enough to see if he had an “act”:

We toughed out the heat until 11:30 when the temperature broke 80 degrees.  I think it got to mid-90s today.  Ridiculous hot for us anyway.  I indulged in A/C which works decent enough and makes everybody sleepy.   A blurry, over-the-shoulder at-a-light shot — but I’ll throw it into the mix.  Fixie was up front with me laying in the sunny passenger seat, panting like mad even though the A/C was blowing right on her.  Yes, that’s canned dog food under the seat — a couple weeks’ worth.  I rarely feed these guys at home.  Meals are usually served in the van after they run around.

At the Lankershim Car Wash in North Hollywood:

One of the hundreds of “reshoots” on my list for this weekend was the steel “thing” at U Pick Parts in Sun Valley.  The “thing” is what’s left of the Laurel Canyon Car Wash sign which was designed by Armet & Davis.  Here’s a vintage photo of it at its original location in North Hollywood:
http://foter.com/f/photo/4180760036/8e690baca6/

I’ve shot it before from outside the fence but wanted to do it right this time and go inside.  It was sort of a hassle because I mistakenly asked if I could go take a picture of it.  I’d have to talk to the owner blah blah blah.  I had to swear the photo was just for me, non-commercial, etc. and pay the $2 admission.  Whatever!  I got some photos of it and it was worth the time and money invested.

Some other things of note — this car looms over the entrance.  It’s W-A-Y up in the air:

And amidst all the neatly organized junkers, there’s this thing next to the train and plane.  Giant walnut?  Acorn squash? 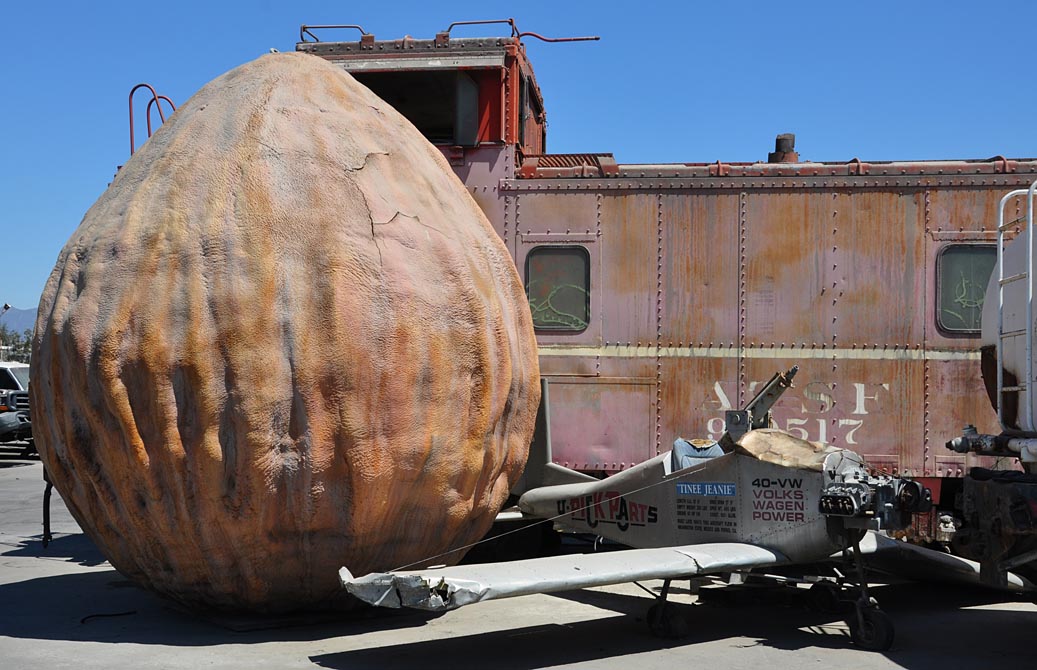 But my favorite was this thing.  One of the guys said it’s been here for at least 25 years.  I assume it was an ice cream truck of sorts at an amusement park.  Or maybe used in parades?  Was this built on a Citroen chassis?  Looks like Citroen headlights and a roundie hood.  But then I guess there were lots of bulging headlights in the 1960s.  Bug-eyed Sprites…  You car people out there probably know this one instantly.

And while I’m asking questions.  Time for the botany question of the trip.  These plants that look like giant grass from Mars.  Anybody know what this is called?

Not enough liquor store signs for you?  From the El Sereno area:

And lastly from tonight’s final destination — Glendora.    9pm and this donut shop was rocking.  Maybe there’s something to this place?  Maybe I should get something here in the morning?

And a closeup of the sign — wonderful for backlit plastic, eh? 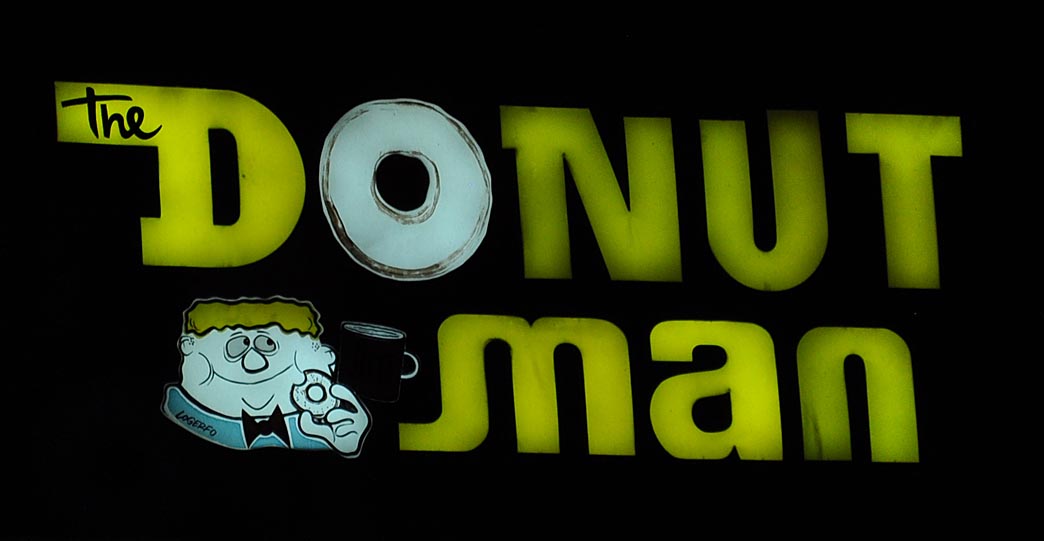 Midnight here.  Tomorrow’s going to be a little shorter on the shooting.  An evening activity (Charles Phoenix’s L.A. Architecture presentation) and a drive home after that and straight to bed.  So you’ll have to wait for Sunday’s photo batch until probably Tuesday.

Until then, don’t forget about the other stuff over at Flickr/Ipernity…
http://www.flickr.com/photos/agilitynut/