A lot has happened since I posted a couple of weeks ago.  I got a job for one thing.  It’s not the most impressive job or the best paying one.  Maybe one-third of what I was making in NYC.  But my boss is nice and I don’t have to dress like a girl.  And both of those things are worth a LOT to me.  And it’s enough money to put a roof over our heads.  It’s about a 20 minute commute to work (from Ventura to Camarillo) with light traffic.  I was dreading L.A. traffic if I had to move there — which was seeming like an inevitability until last week.

Finding a place to live was no easy feat with four dogs.  Most apartments, if they allow pets at all, have a strict policy about a maximum of two dogs.  And under twenty pounds.  My guys fit the weight limit — but the “four” was not even open for discussion.  No matter how good my references from the other places were and no matter my many years of experience as a dog trainer, etc.    So, the apartment building that we call home is definitely on the skanky side.  Very overpriced for what it is.  But I really had no other option.  It’s about three times bigger than my last NYC apartment was.  Which means I might actually have to buy a couch to fill up the void of a living room.  The dogs will like that!  It’s really ironic that this is the most ramshackle place I’ve ever lived — and it’s in California, not New York.

On to some local photos.  Here’s one of the parks that I run my dogs at on a regular basis.  Originally a cemetery — now officially “Memorial Park”.  But most folks call it Cemetery Park.  Only a few of the original grave markers were kept.  Which pissed off a lot of people.  Especially since many of the interred were veterans.  The park is now mostly used by people exercising their dogs. Which has especially pissed off the relatives of the deceased (dogs crapping on sacred ground).  But the owners pick up the poop & it’s quite a joyful place.  There are big signs saying “dogs must be on leash” and “off-leash dogs will be impounded” but nobody pays them any attention.

And in the park’s parking lot — Poinsettia plants — which are more like trees if allowed to grow up.  Most people in other parts of the country only know them as those two foot tall Christmas decorations that wither and die by January.  But here in the “Poinsettia City by the Sea”, they are happy campers:

I remember when this Arby’s opened.  Just the concept of a roast beef sandwich seemed novel at the time.  This hat sign is well-maintained & lit at night.  The interior has been remodeled & there’s no longer the original neat floor like this one: 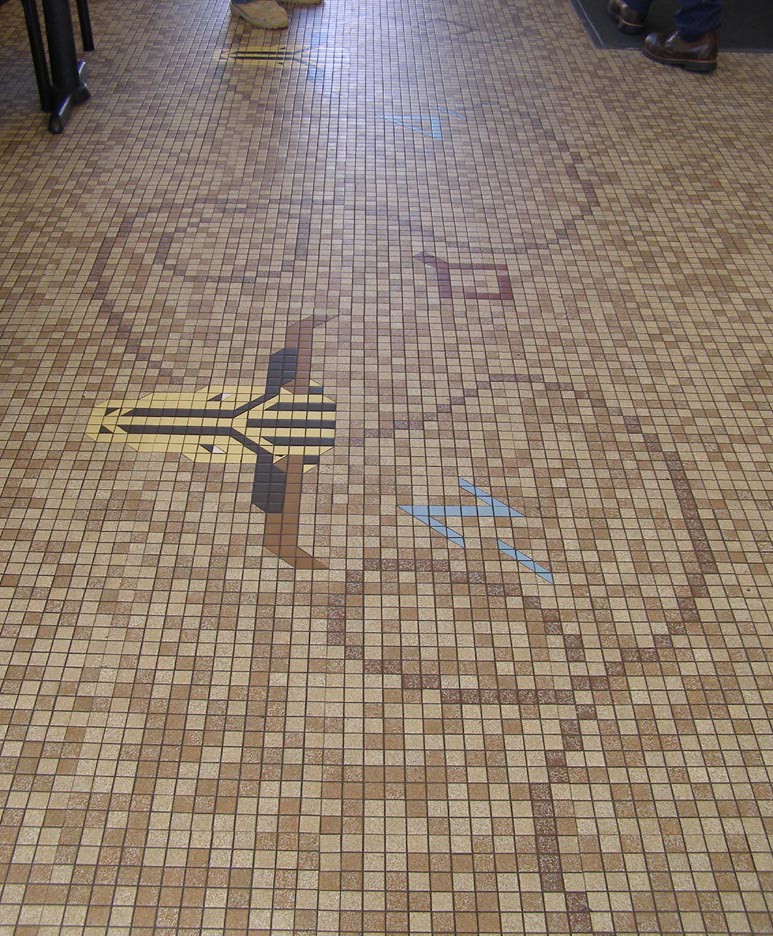 I’m proud to report that Ventura also has a giant rooster now.  This guy is on the roof at the Bodacious BBQ.  He is lit with a spotlight at night and can be seen from Highway 101:

A few signs for you.  This is from a used car lot in town:

Over in Oxnard — this relic of a sign.  Once the Missile Cafe and Missile Motel.  This sign advertised for the cafe which later became a bar.  The motel sign is there but completely covered with white paint now.  The buildings are long gone but the signs remain.  The name was a reference to the Point Mugu Naval Air Missile Test Center which was built in 1946.

The other side with tacky & peeling applied lettering:

Just a mile or so from my job in Camarillo — this cute guy:

who is even more stunning by night:

So, all is well.  Just three months ago and three thousand miles away, I had no idea that this would be happening — or even possible.  The job & apt. hunting has been a real struggle but my persistence has paid off.   There are no big travel plans for a while — maybe a long, long while.  But I’m planning a quickie trip for my Xmas / birthday.  Just three or four days.  I’ll keep you in suspense about the “where” for now.

Until then, I hope you are able to make lemonade out of the lemons that life gives you.   An appropriate metaphor since when I was growing up here in Ventura, it was known as the lemon capital of the world.  Here are a few vintage crate labels that you might enjoy:

Lemon groves were everywhere then.  I remember riding my bike to school through them.  It felt 10 degrees warmer when you emerged from them.  Most of those groves have been replaced by houses and shopping centers full of Home Depots, Targets, Vons, Burger Kings, and all that.  Chula Vista and Corona, California both claim to be the world’s lemon capital now.  Our next door neighbor, Oxnard, is still busy making lemons — one out of every five Sunkist lemons come from there.   Some of Ventura’s lemon and orange groves have survived despite all the new development.  And there is still that huge sky, the hills, the gorgeous beach, and Hawaii-esque trees and flowers everywhere.   I had forgotten about the smell of the eucalyptus trees.  I am longing to be reacquainted with the fragrance of night-blooming jasmine.

Today, while driving the dogs up to Bates Beach (10 miles north) to run their butts off for their special weekend treat, I passed a handmade sign reading “Avocados 7 for $1”.   Yet Subway still charges $1 for avocado “spread” on its sandwiches here.   Crazy.  Like the inexplicable fact that gas in Southern California costs more than in NYC despite all that oil drilling all over the place, on land and right off the beach.  I’m about to get Sparkle her first “smog test” (like baby’s first pair or shoes).  Smog tests and smog test places are another odd little way of life here.  I guess we’ll both be re-branded as Californians soon (I need a new driver’s license).  Truly psychological whiplash!