My endless summer has finally come to an end.  Before we launch into the final batch of photos from this trip, let’s get the trip stats out of the way.

Days on the road: 37 (two days less than the spring trip)

16,397 miles — that’s what I put on Sparkle during this trip.  With the spring trip of 15,712 miles, that’s 32,109 miles this year.  Plus some little trips here and there.  She pretty much sits the rest of the year since I take the subway to work.  In fact, I only put less than 100 miles on her between the spring trip and this one.

Her odometer currently reads 335,007.   And I won’t hesitate to take her out for another marathon trip next spring.  She runs like she’s brand new.  I don’t know why Chevy stopped making these Astro Vans.  They are the VW Bugs of our generation — you can’t kill them.  I didn’t spend a dime on repairs on this trip (excluding oil changes).  There was that A/C breakdown early in the trip in Illinois.  But that doesn’t count since it was due to faulty repairs in the spring — so there as no charge.  In fact, after dealing with Firestone headquarters and the district manager back in Albuquerque, I managed to get a credit for half the original repair ($400 of the $800).  So that was nice — but nothing compensates for the two days of shooting that were lost.  However, I’m happy to report that my A/C is still working superbly.  And I absolutely needed it just about every day.

Total spent on gas:  $3,438.  That’s 21 cents per mile.  Sparkle never claimed to be energy efficient.  And there were a lot of mountains and city driving in there.

I noticed quite a discrepancy of gas prices on this trip.  In Wyoming and Colorado it was about $3.40 per gallon.  A little higher elsewhere, including Iowa even with the ethanol.  As soon as I got to northern Illinois — a huge jump to $4.10 or so.  Much cheaper on the OH and PA interstates coming home.

Speeding tickets:  One “warning” early in the trip for speed and not signaling — but otherwise no tickets!  A first — or so I thought.  Little did I know about the “surprise” waiting for me in my mailbox from Muscatine, IA.  A $100 ticket from a speed camera.  I have no recollection of seeing “speed camera” signs or a flash from the camera when it got me.  But there it is — a couple of photos of Sparkle merrily motoring along.  I woulda waved!  The ticket says I was doing 66 in a 45.  Luckily, not a “real” ticket since nothing goes on my driving record.  Supposedly.  They must make a killing with that camera.  I guess it’s the way of the future.  Soon, we won’t be able to speed anywhere and it’ll take twice as long to get anything done.  Roadtrip thrills will be fewer.  Bummer.

Number of photos taken:  5,416.  About 550 of them appeared at the blog; another 500 or so appeared at the agilitynut Flickr account.  Roughly about 5,000 photos will eventually get added to the website.  That’s after I get another 5,000 from the spring trip in place.  I’ll be lucky if I can get all the photos from these two trips up by next spring.  It’s one thing to just upload photos straight from the camera as many people do.  But I crop & tweak each photo.  And then there’s the research for each subject for the descriptions which takes up the most time.

“Value” of this trip:  Overall, I’d rate this trip as fantastic.   The weather was mostly great.  I really did a great job of preparing the lists and maps so that every day was chock full of organized stops.  It was also just about perfect in terms of what was accomplish-able.  There’s nothing sadder than coming home with pages and pages of stuff you couldn’t get to.

The dogs would also rate this trip as awesome.  Lots of swimming, motorcycles to bark at, prairie dogs to chase, different terrain to explore, and extra meals due to Grippie’s screwed up timeclock (blindness? dementia?).

What’s next:  I’m done with the big trips for this year.  I do the two biggies in spring & summer when the weather is best for shooting.  Then I bust my butt the rest of the year working & paying for the trips.   There will probably be some little three day trips in the fall.

Next year, if I can still get time off from work and I get the credit card balance whacked back, I’ll be doing a spring trip to Florida and a summer trip to California.  If you want a heads-up, I send a quick tweet when I head off on big trips.  You can become one of my Twitter followers here:
https://twitter.com/roadsidenut/

So, let’s move on to the photos from Saturday’s Chicago area whirlwind.  There are more vintage signs here than anywhere else in the country, hands down.

A “skeleton” sign burning brightly during the day in Mount Prospect: 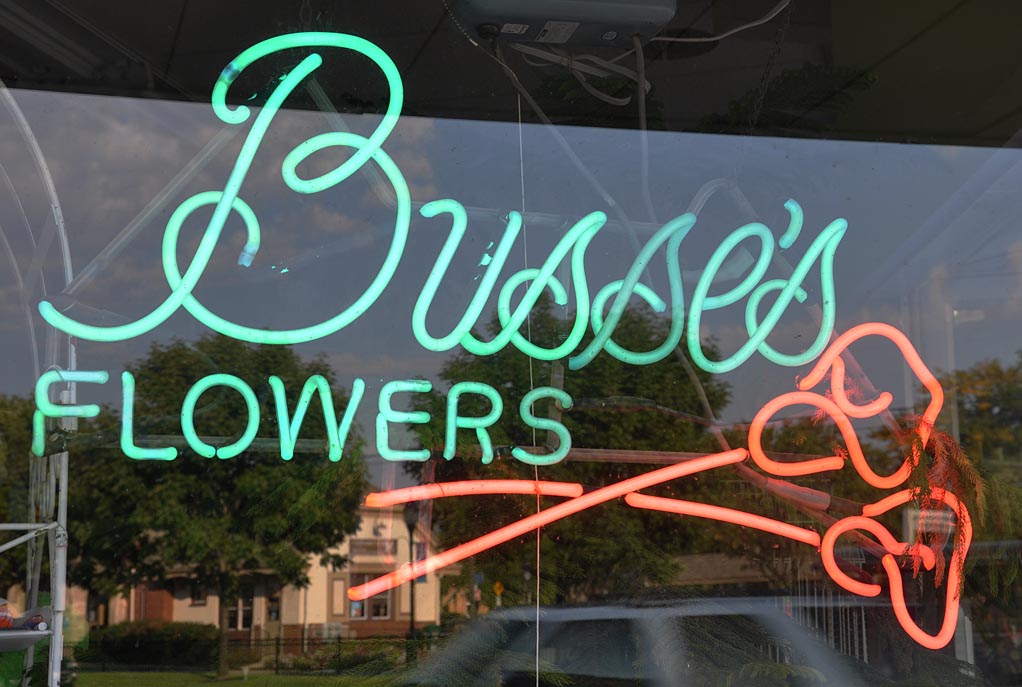 A couple of photos from Mundelein.  Clearly an adapted Rexall sign:
http://www.agilitynut.com/signs/rex.html

A nifty mid-century building.  I love the tube entrance.  Houses the Advocate Medical Group.  It was surely built before CAT scans but I can’t help but think of that.

A restaurant in Highwood:

On to Chicago proper:

I stopped to shoot the Norwood Park Auto Sales sign — and then realized, hey, what’s that off to the right:

Yup, a big neon collection inside: 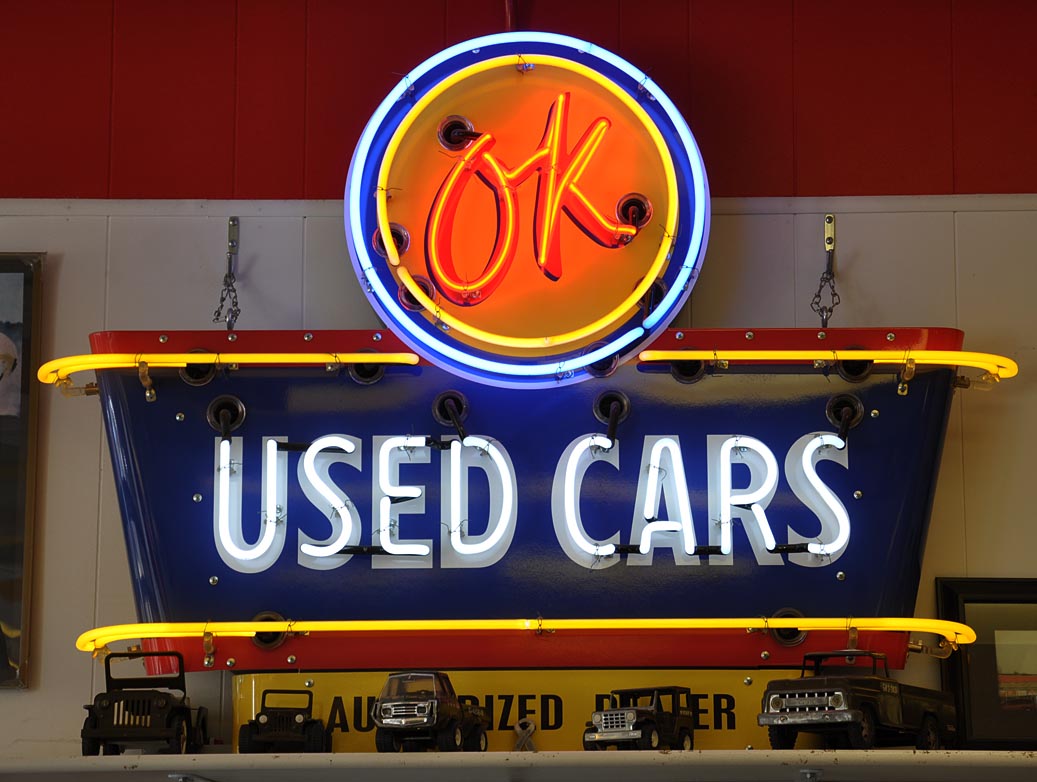 More Chicago signs — this one still lit and bulbs flashing during the day: 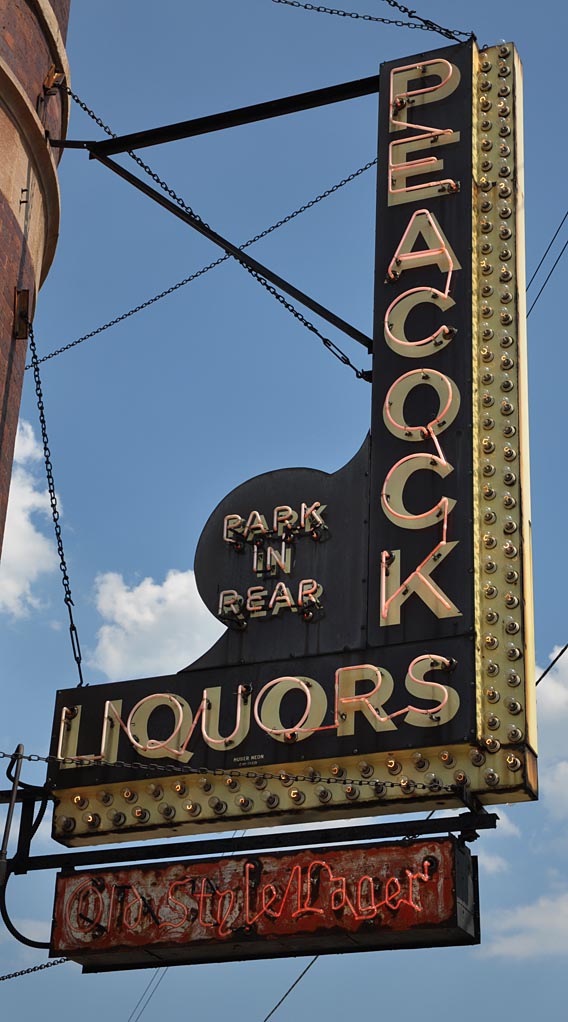 Ruby Cleaners is still open but lost the neon at some point:

Rare gold porcelain enamel — and a quirky arrow.  The neon was lit here during the day:

This one really intrigued me.  Who knows what it looked like originally.  But it looks like a lot of hands-on altering over the years.  Some of the holes obviously held bulbs.  But other holes make me think maybe there was some internal backlighting going on.  Maybe not.  The holes are so unevenly spaced — particular on the arrow that it looks like a real D-I-Y project.  I told the guy standing there who couldn’t understand why I was shooting it that it was a “truly fantastic piece of junk”.

I’ve shot this twice or thrice before but today the light was finally right.

Closed & for sale.  Shoot this one while you can.

Architectural Artifacts on Ravenswood has been selling some neon signs lately.  They don’t go after them — but when business owners can’t or don’t want to keep their signs, they sometimes end up here.  I don’t know if any money changes hands or they are just donations.  Here’s the two vintage neon signs that were there on Saturday.  Very sad.

Back out into the sun and hope and all the good stuff that we still have to admire.  How can simple plastic letters look this good? 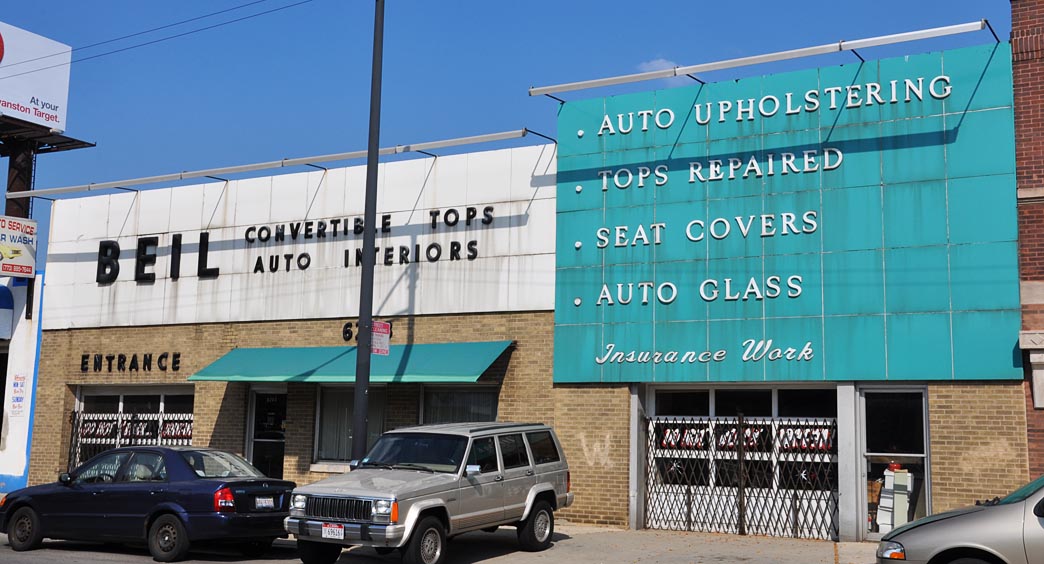 Marvelous.  These eagles continue all the way around the facade: 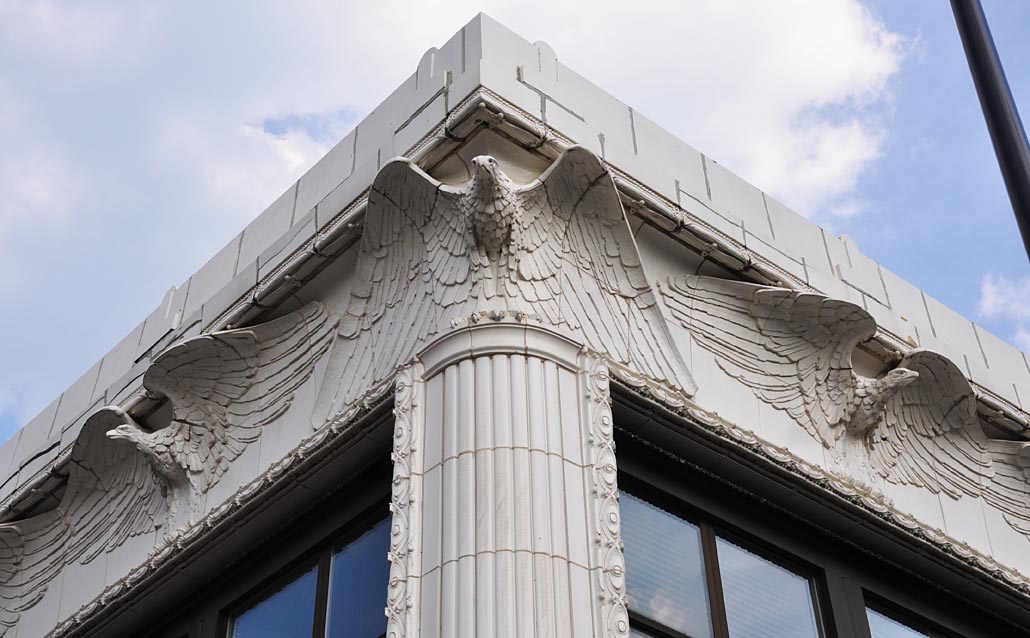 Apparently, a local chain — but this is the only location that I know of with a stunning neon sign like this:

Iggy’s is now Bonny’s — I don’t know what the name was originally:

And as the light was waning — the reality set in.  Must drive home.  Now.  Waaaah.  This one lit nice and early just to tempt me into staying.  But no.  Chasing bulbs working also:

I got through all but about 50 Chicago stops.  Which killed me.  But I cheered myself up with the promise made while driving home that I would start next summer’s trip with finishing up that list even if it’s way out of the way.

Thanks for all your comments, support, praise, and enthusiasm on this trip.  It’s a real energy booster while I’m slugging it out on the road.  If you want to make a donation towards my efforts, that’s always greatly appreciated.  There’s a “Feed Sparkle” button on the upper right of my webpages — which takes you here:
http://www.agilitynut.com/donation.html

Or you can just go to PayPal and send whatever amount you want, big or small, to the agilitynut@hotmail.com account.  Or if you’re broke like me, positive feedback is always nice.  I have no idea how many people are out there following along.

Wishing you all sunny skies and trouble-free roadtrips of your own!