Finally, and just barely, I finished up Minnesota today.  Somehow my estimates were off — and I’m now a day behind schedule.  I guess I’m not going to get to the northern Illinois stuff.  Which makes me pout like a spoiled child.  Next year’s trips probably won’t take me up this way (Spring: Florida & Summer: SoCal).  It really hurts to have organized this chunk of stuff and not be able to get to it til 2014.  I’m not giving up just yet — but the Wisconsin stuff yet-to-do looks like two days worth.

More sunshine all day today.  But much of it spent sitting in the driver’s seat between one-stop towns.  The dogs made the usual demands — and I had to indulge them.  When a trip starts winding down, I start making more and more stops for them.  It just really makes me happy to see them happy.  Here’s a typical and frequent excerpt from my day of driving.  Sorry that the video is sideways — taken while driving and just sort of randomly shot.  I don’t see a function at YouTube to rotate the video.  Much of the day I had these sound effects since we were along the Upper Mississippi for a good bit of time.  Nik is whining, the high-pitched squealing is Grem, the deep barking is Fixie (at them), and Grip must be in there somewhere.

But let’s start the photos back where the day began — in Austin.  I’m guessing there was a nicer facade here which has since been removed: 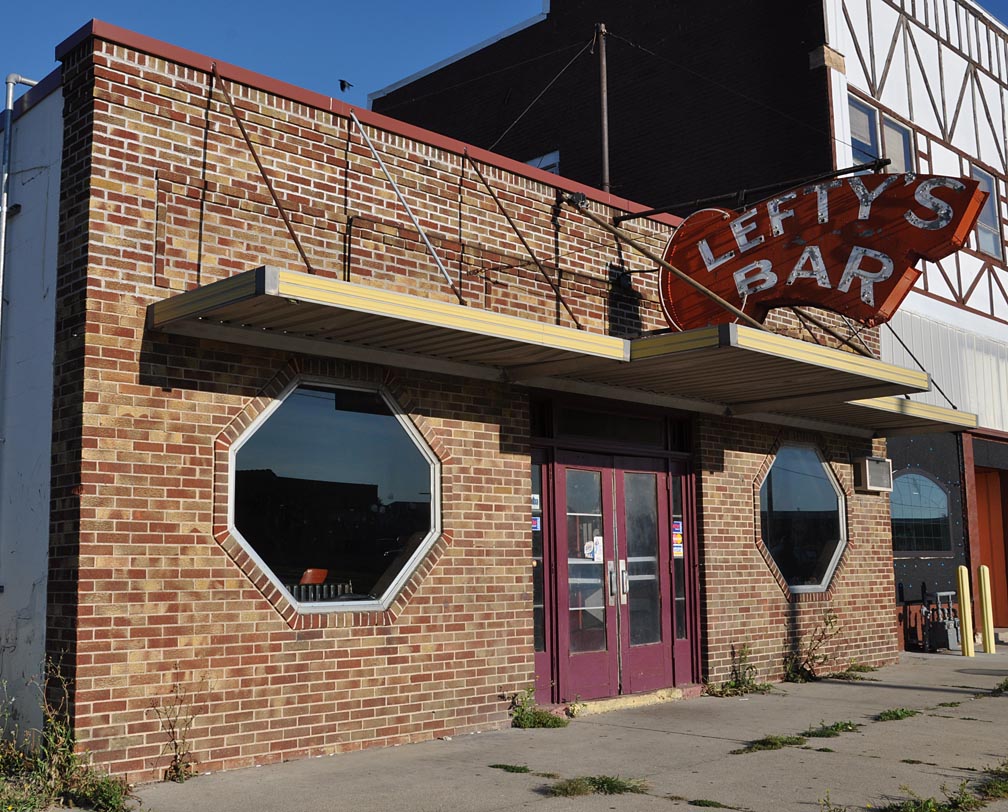 On to Lanesboro — for the Spud Boy Diner.  I’m too wiped out to give you the whole history of this place.  And it’s already been done  better than I could do at Larry’s blog:
http://dinerhotline.wordpress.com/2009/06/28/gordon-tindalls-spud-boy-diner-gets-nice-write-up-and-it-is-almost-a-year-away-from-opening/

Let’s just say, it’s one of those happy ending stories thanks to people who stepped in to save this place.  Like Mike and Gordon. 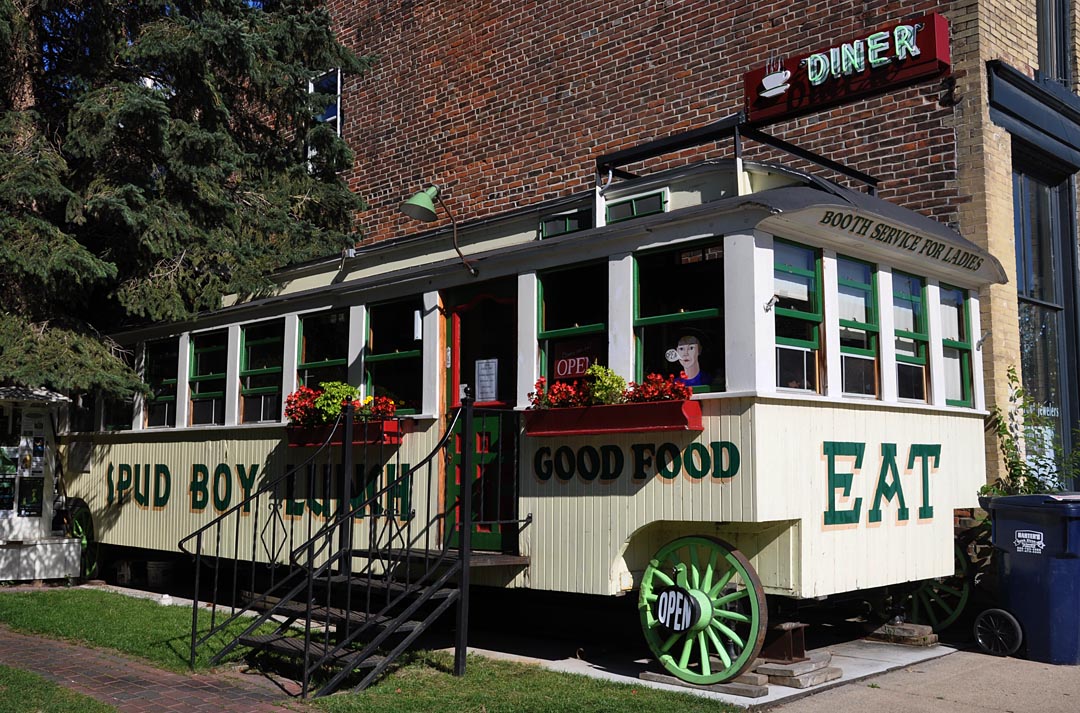 Timing is everything and it just so happened that Mike Engle from Upstate New York was in town and stuck around to meet me.  He’s the guy in the middle of this photo.  And he’s the one to thank for saving the diner.  He’s also written a couple of books about diners and been obsessed with them for decades.

So, it was Mike that hooked up Gordon Tindall with this diner.   Gordon had previously restored and operated the Red Rose Diner in Towanda, PA:
http://www.flickr.com/photos/agilitynut/1474485764/

I didn’t get a chance to talk to him since the place was jammed with people.  A tiny town on a Tuesday morning.  Good to see it’s doing well!  Here’s Gordon making REAL home fries with a grater over the grill: 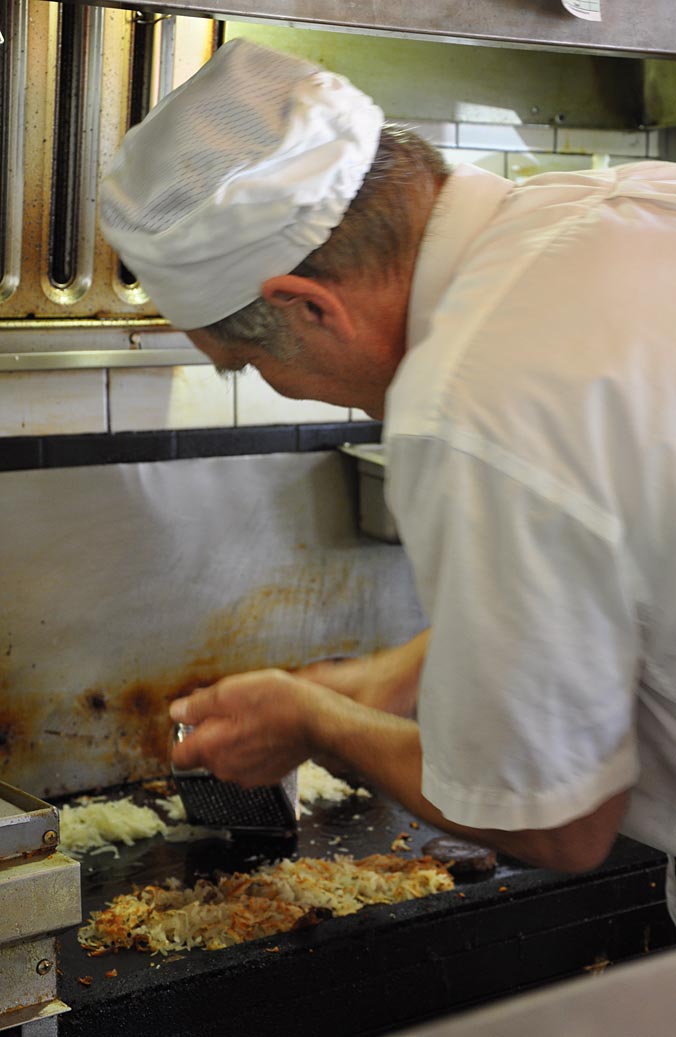 Another long view of the very small diner.  Gordon’s the only one cooking.  While his wife, Val, just visible over his shoulder, takes the orders.  It’s a wonderful little place and I wish I’d gotten a chance to actually eat there.  Beautiful little town, too.  Add to your list.

Back on the road.   Here’s one from Rochester —  the Recreation Lanes:

A nice mid-century design from Winona:

Also Winona — I’ve included Louis Sullivan buildings in posts before.  I figured you might be tired of them — but this one’s a knock-out.  This one was designed by Purcell & Elmslie.  Elmslie was Sullivan’s chief draftsman.  I only wish I’d been there a half hour earlier when the place was open.  The murals and other details inside partially visible through the windows looked incredible. 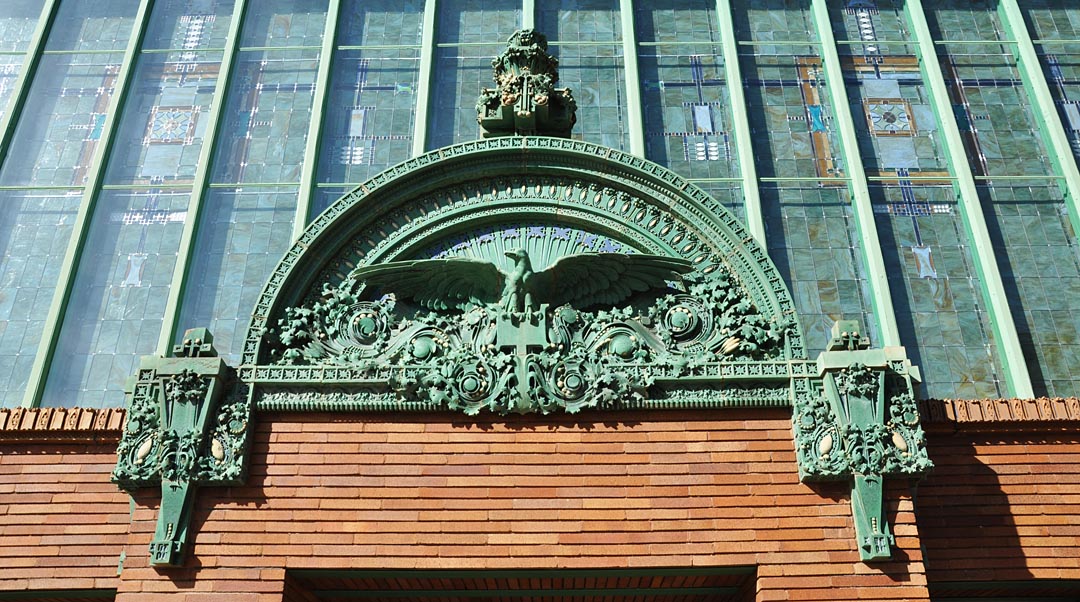 And this is how most of my day’s end here on the road.  Too late to shoot — light enough for one last run & sniff for the dogs.  This big grassy area was between a school and a cemetery.  There’s still a lot of vaguely owned, golf-course-green areas out there in America up for 20 minute grabs.  I don’t know if that will be the case 10 years from now.

One I shot in the dark just to see if it was worth going back sometime to shoot this statue in the light.  I thought you might like it since it’s rather eerie from the flash.  This was at the Ashley Furniture factory in Whitehall, WI:

OK — on to La Crosse and Sparta first thing in the morning.  I know I should get you some food shots — and I still haven’t come up with a self-portrait yet.  Working on it.