Most of today was spent up in the mountains.  Rockies, near the Tetons which I had never seen before.  Pine trees, rivers, lakes all that.  The passes were not as steep as the ones in Colorado for which Sparkle and I were grateful.  But there were several of those “wait for the pilot car” road construction delays.  Then, coming back down the east side of the mountains, it was flat and yellow again within minutes.

The morning started with a watermelon party in Evanston.  I’ve been hauling around this melon since Green River, UT which is quite famous for them.  Finally, time to crack it open.  It was the smallest one they had — which was huge — and only about $4.  Juicy and delicious as advertised:

I tried to get a doggie & melon photo-op — but just as I started to snap at this park, one of those rotating sprinklers came by.  Fix immediately jumped off the table and ran back into the van.  Nik and Grem closed their eyes but stayed in position.  Grippie didn’t seem to even notice the oddness of the spraying water.

Grip wanted no part of the melon.  She and Fix are not fruit eaters.  But I know from experience back home in off-leash Prospect Park where picnic-ers discard banana peels, spare rib bones, birthday cake, papaya pits, etc., that my youngsters would help me out with this thing.  Rind and all. 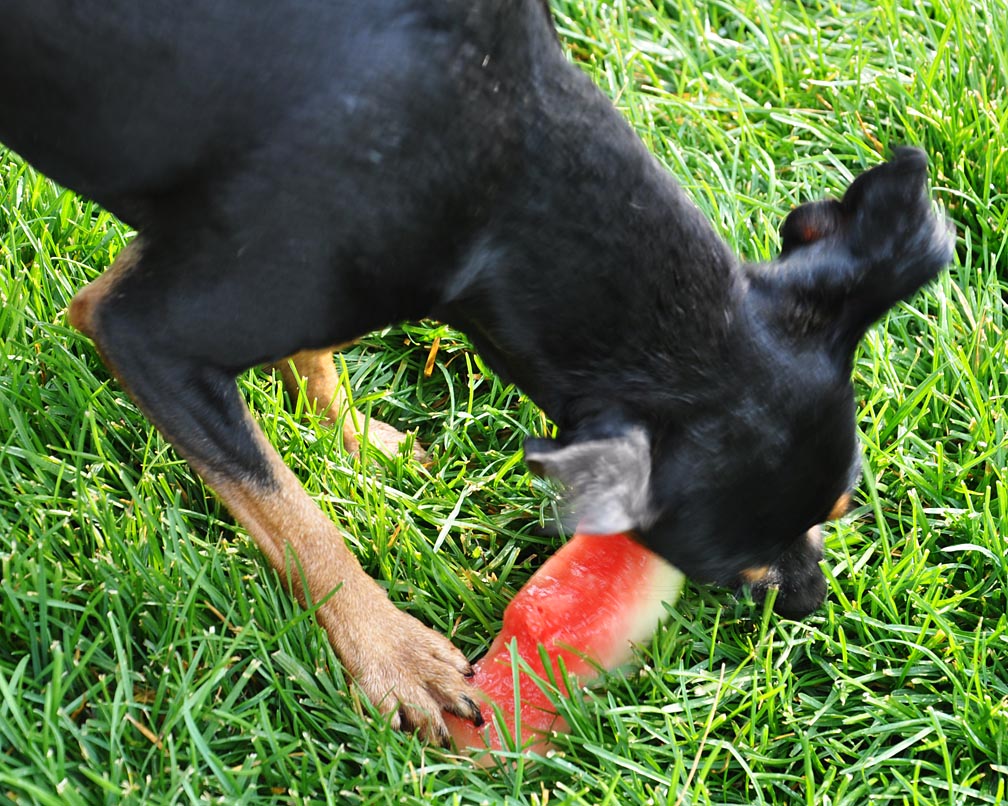 Moving on to Cokeville — the Valley Hi Motel.  I don’t know if those neon bits are meant to be snowflakes or flowers — but I love them.  If you like freestanding neon like this half as much as I do, you might want to check out my Flickr group:
http://www.flickr.com/groups/neonextensions/pool/

A quick little sidetrip over to Montpelier, ID.  This has got to be one of the world’s smallest A-frames.  Vacant – I’ve no idea of its original use.  Office?  Seems too tiny for even a bed. 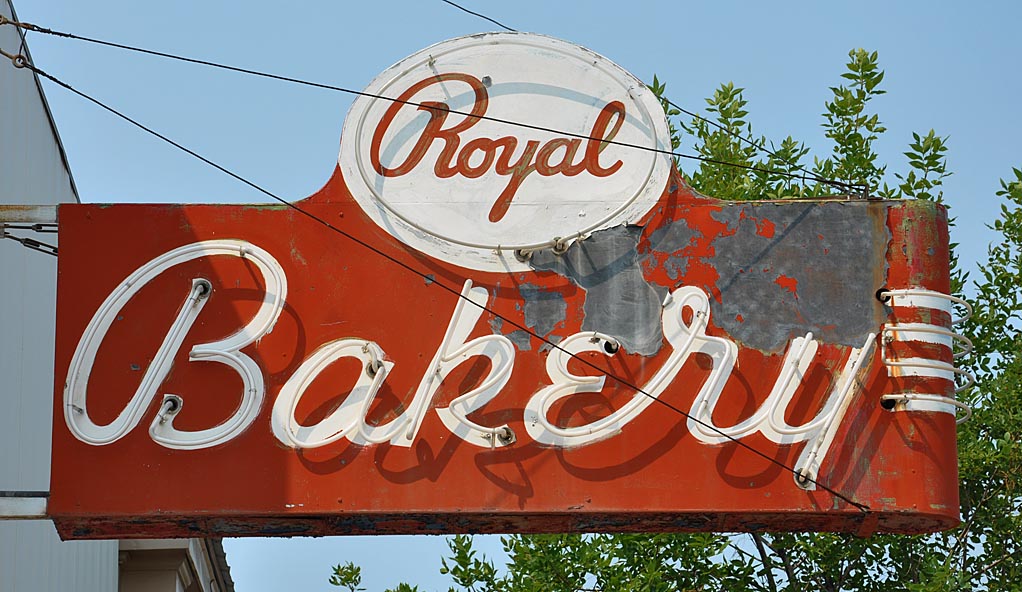 And up into the mountains we go.  Lots of stuff in Afton.   There’s a male counterpart to this cowgirl just up the road: 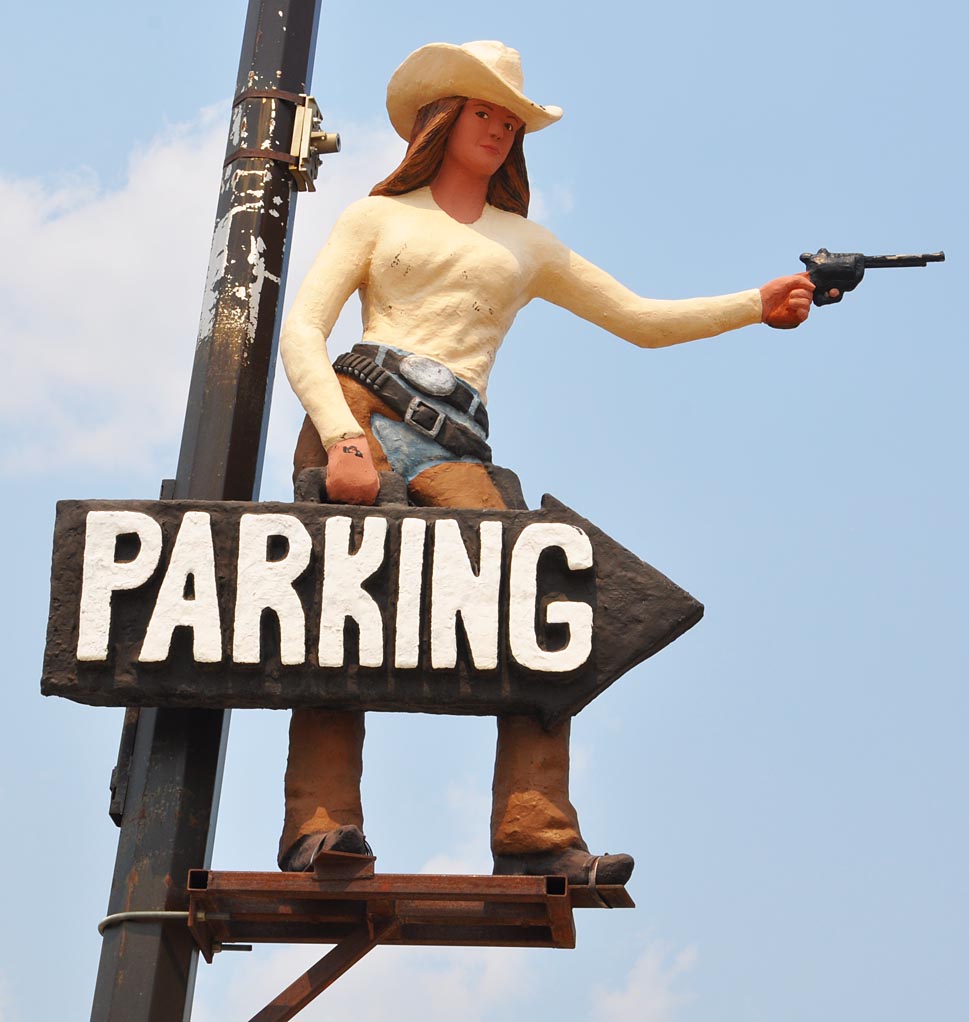 Some fun signs from Afton:

I’m pretty sure this circle-with-points was a stock design used by sign shops.  I like the extra effort of the colored letters of “COLOR TV”.

On to Jackson — which was far, far too touristy for me.  Mobs of lookie-lous & cars & traffic.  Amazing location though with steep ski mountain declines that just about drop right into town. 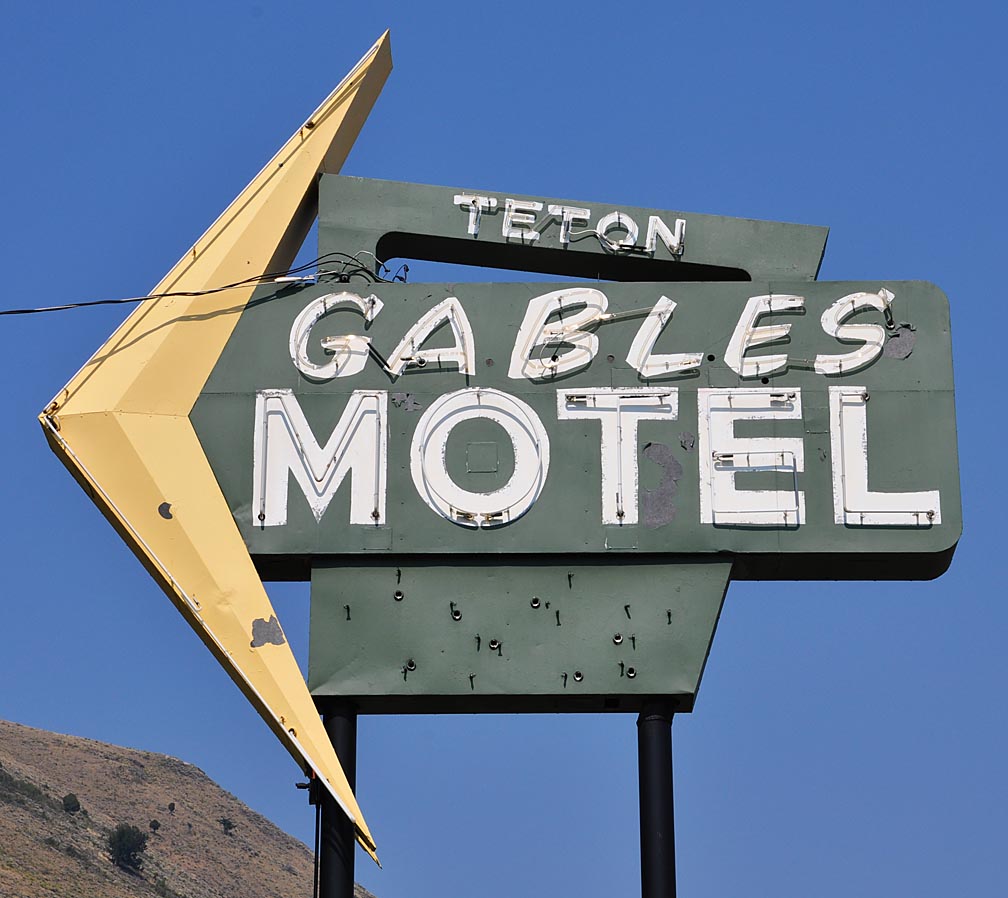 The other side of this sign has neon – but was facing into the sun.  This is the side that faces away from town.  I prefer this side which reads “Nretsew” instead of “Western”:

Still in Jackson.  Obviously from the holes and the odd gap after the “r” in Kudar — that this place had another name originally.  Still, I like the shapes and the quadruple bullnose:

On to Dubois – quite a fun little town.

And we landed in Lander for the night.

Lots of northern & central Wyoming tomorrow.  If there are no hitches, I think we might be done with Wyoming by Friday and be a day ahead of schedule.