Ever have one of those days where everything goes right?  Me neither!  But it was pretty damned close today.  99% sun, AC to keep us meat locker cool despite upper 90s outside, lots of planned and unplanned subjects to shoot, happy & healthy dogs…

I’ve been to Nebraska several times before — and done a fairly thorough job, so I thought.  But I’m always adding more stuff to my list from my research and it all added up to quite a lot of stops yesterday and today.  Tomorrow, I should be able to wrap up and get to Colorado.  About a day and a half ahead of schedule!  Which always makes me nervous that something will go wrong.  But let’s not jinx my good fortune.

It’s nearly 1am — and I have tons of photos for you.  The day started in Lincoln.  Here’s a nice mid-century building that I hadn’t noticed before.  Love the little fins and the asymmetrical use of glass: 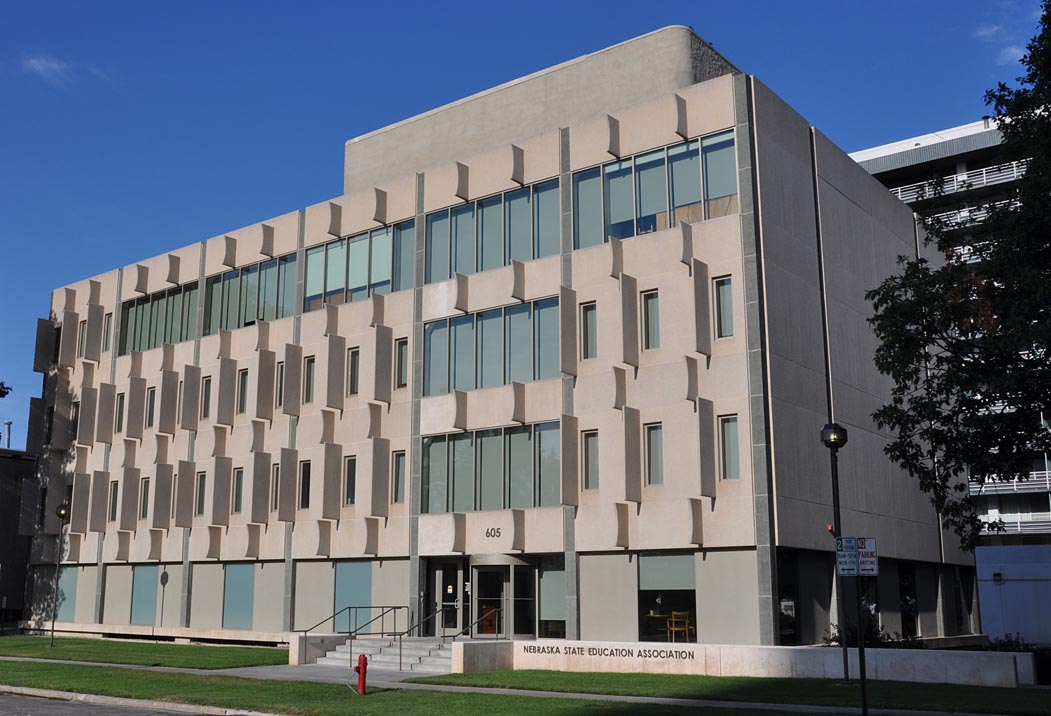 A “classic” rooster in Lincoln.  If you can’t get enough of them either — I have dozens more at my website:
http://www.agilitynut.com/critters/birdschick.html

A couple of signs from Lincoln — the metal on this one appears to be brand new — probably a replica of an older sign: 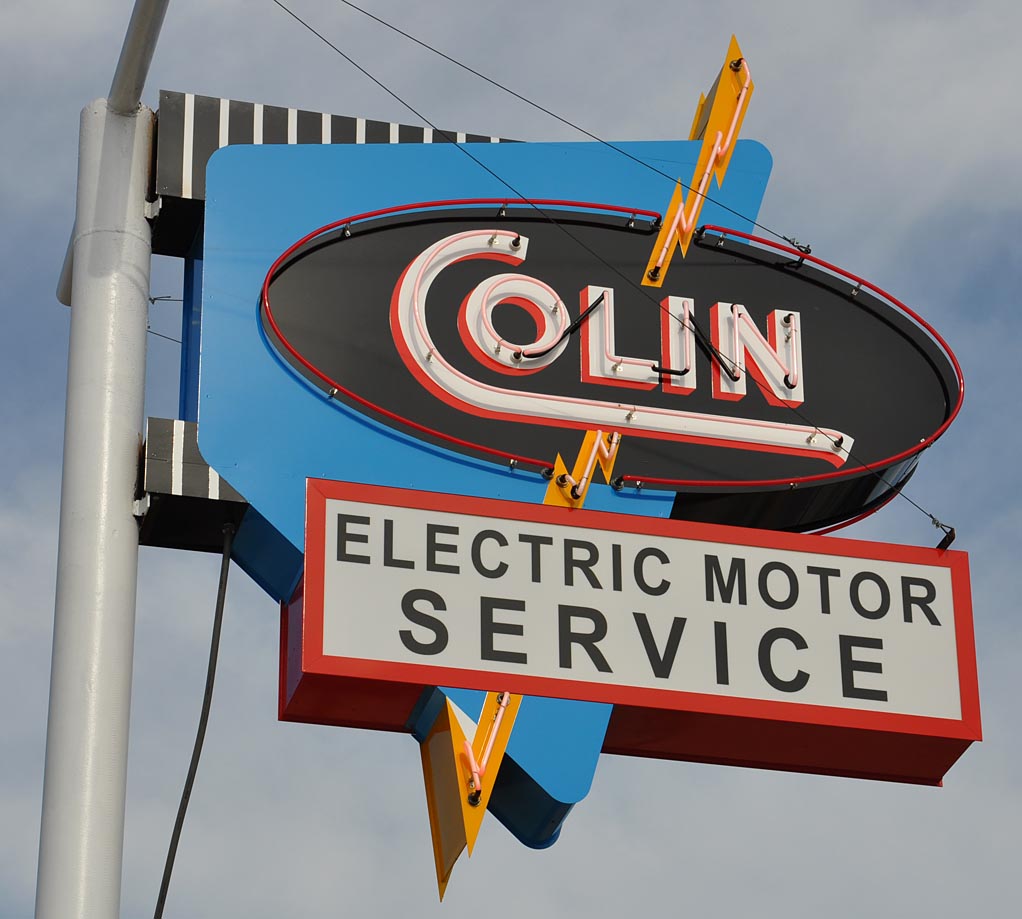 And an oldie — though maybe the plastic part was a later substitution.  And even the text doesn’t quite fill the space right and the panel shows signs of patching.  So probably a different name originally. 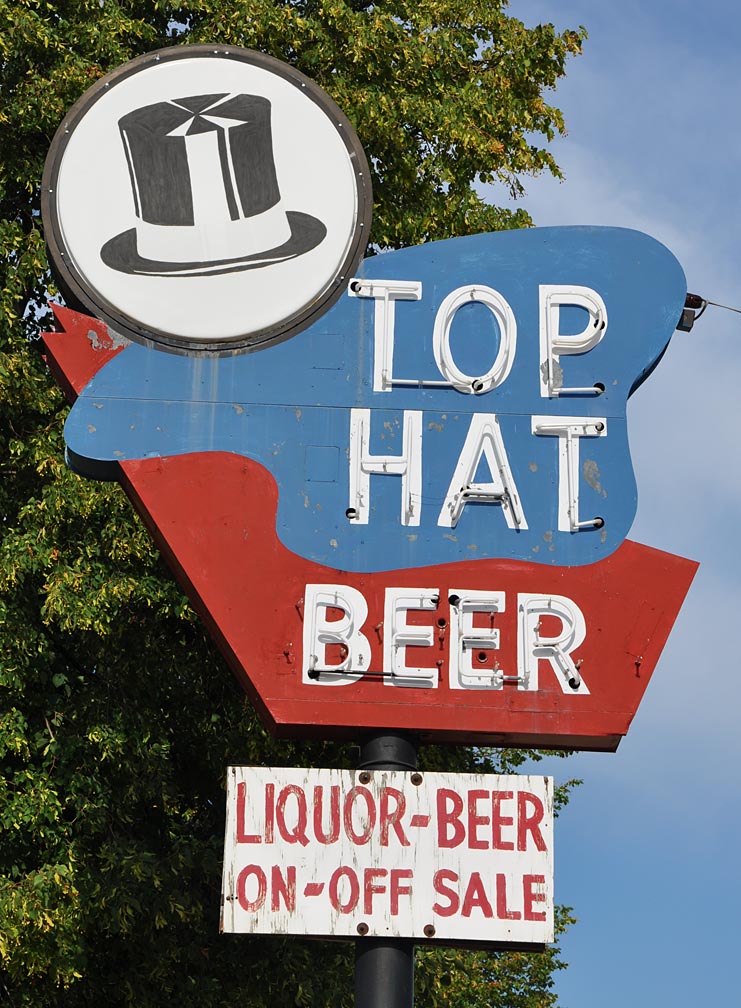 Moving on to York.  I’m thinking neon originally — and then a very nice refurbishing job after removing it.  This one’s monster big so I give the owner credit for fixing instead of replacing with a junky plastic sign: 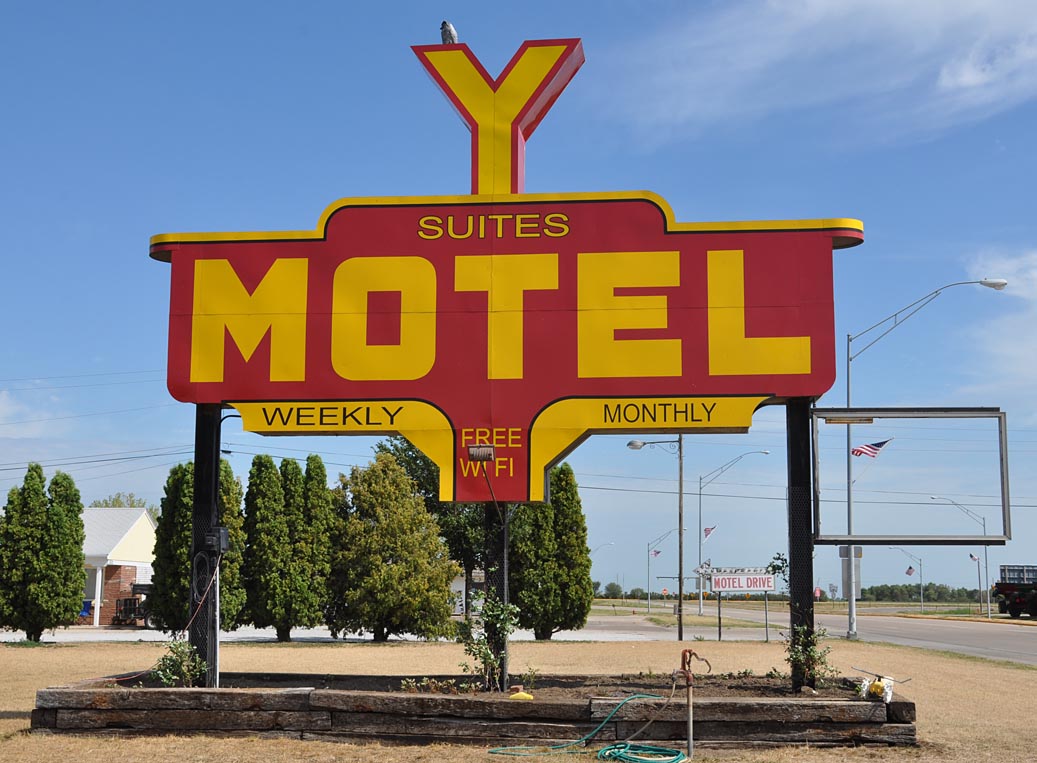 Don’t you love happy endings?  I’ve stopped by the Shady Bend in Grand Island for years.  The long-vacant building was surrounded with weeds.  I peered in the dirty windows to imagine what must have been.  It just seemed doomed to crumble eventually.  Then, I read that someone actually bought and fixed up the place.  Now, the weeds are gone and it’s a very nice little restaurant.  More info here:
http://brianbutko.wordpress.com/2011/07/18/shady-bend-station-restored-and-back-in-business/ 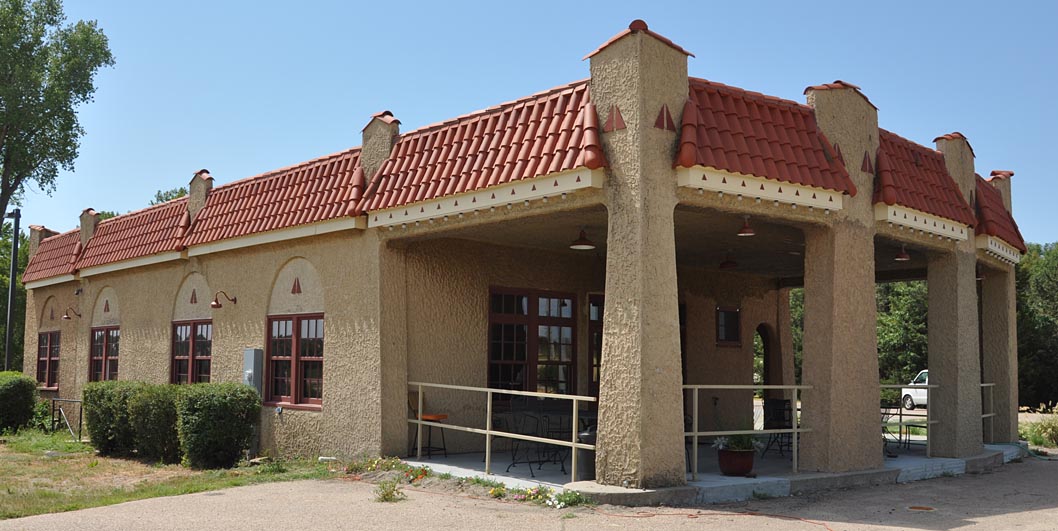 The entrance area features original cabinets — the restaurant is to the right: 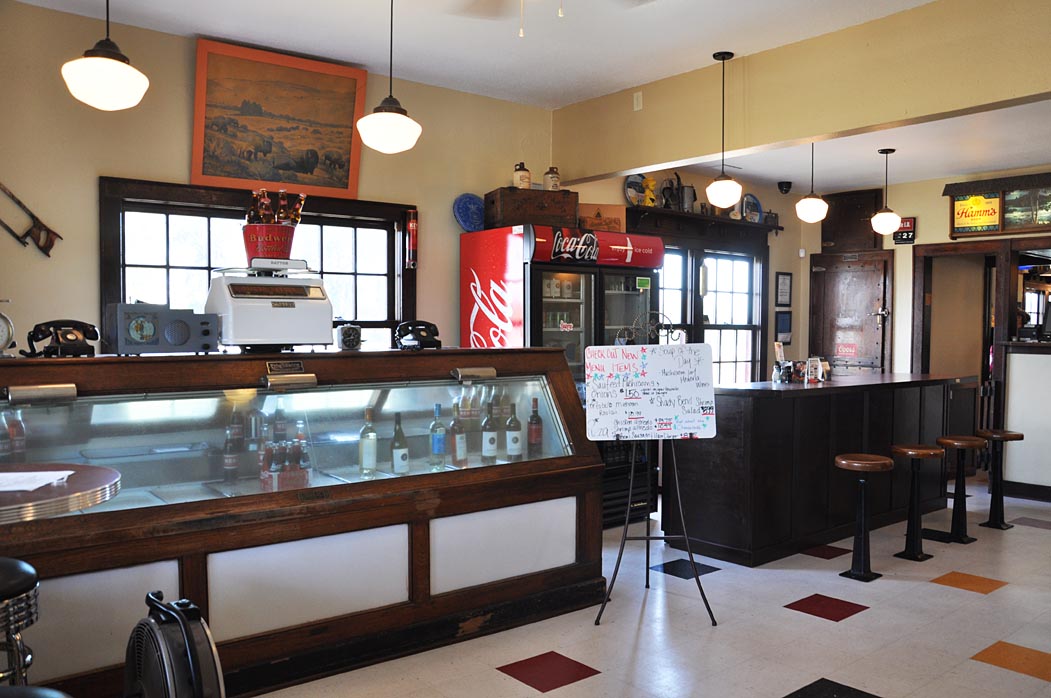 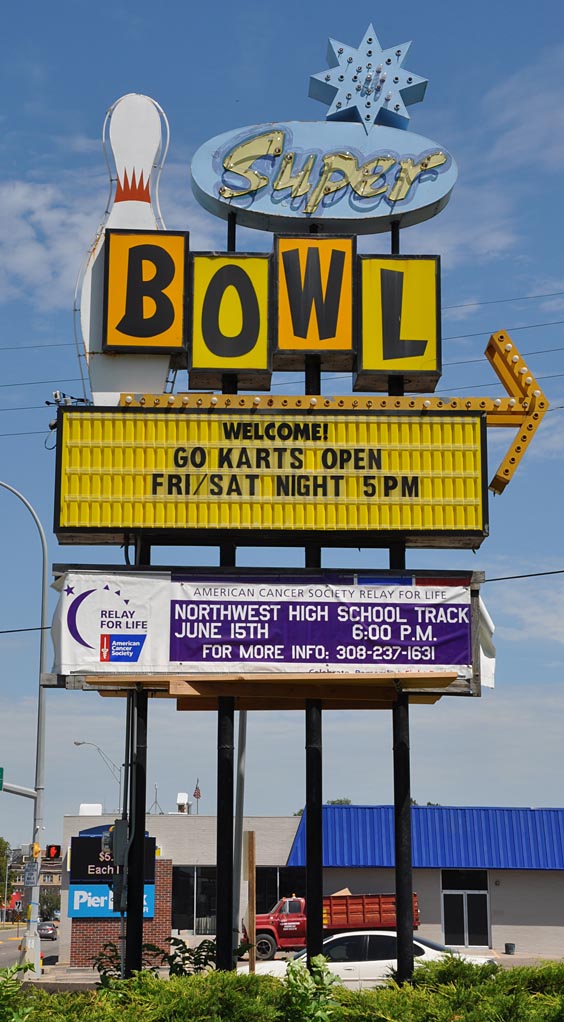 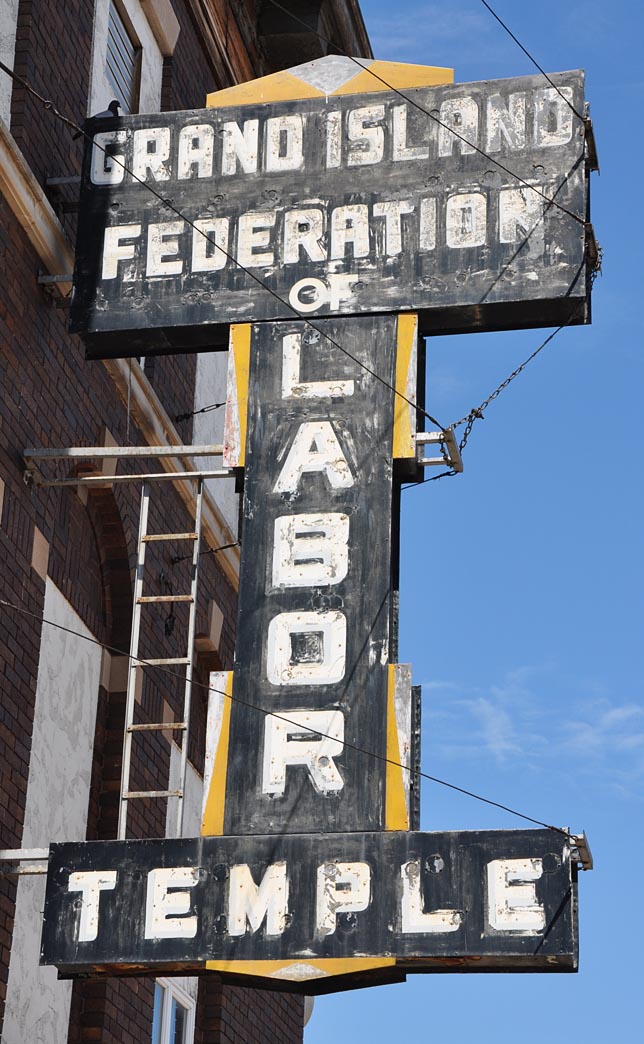 And another success story.  The Grand Theatre in Grand Island is being restored:
http://www.theindependent.com/news/local/a-theater-of-restored-grandeur/article_6aa3c030-b450-11e1-a5dd-001a4bcf887a.html

I had read that Tim Dunn, the master of vitrolite, was going to be restoring the facade.  So… when I pulled up and saw the two cranes, I suspected one of the guys must be him. 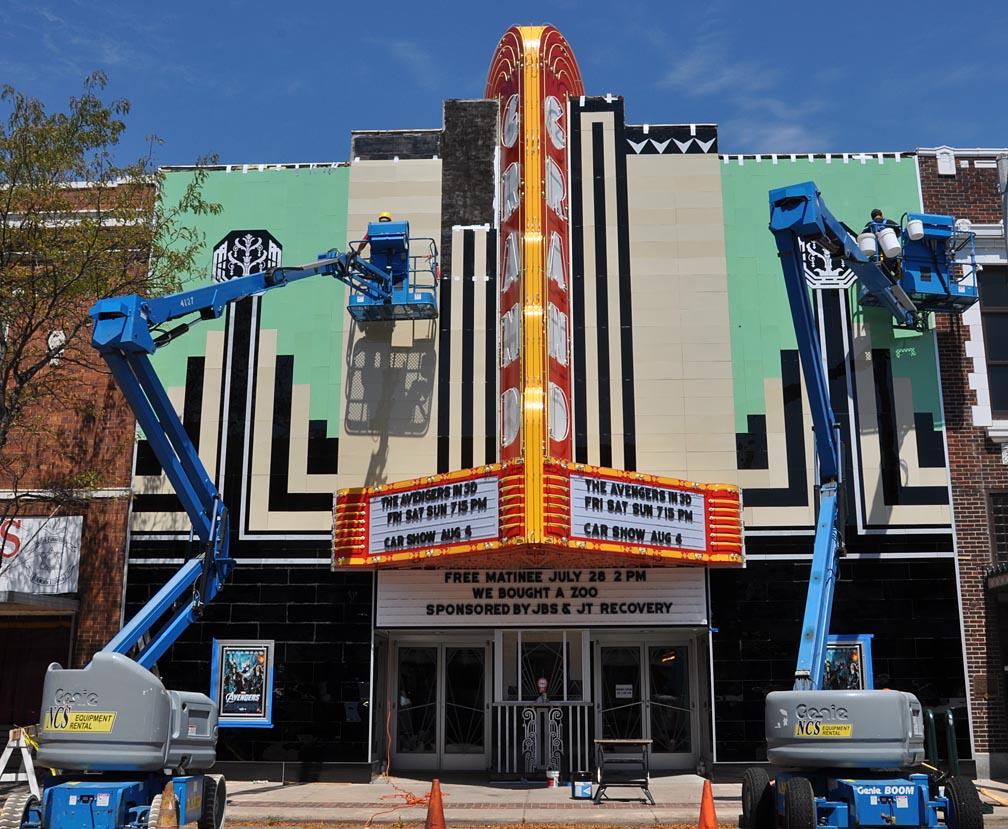 Sure enough — I was flattered that Tim came down to meet me when I hollered up at him.  Some of you may recall my blog coverage a couple of months ago of the restored Quarrier Diner in Charleston, WV.  Yep, Tim worked on that:
http://www.flickr.com/photos/agilitynut/7009908007/

and countless other theatres, storefronts, and interiors.  Here’s his website with links to info & photos of some of his other projects:
http://www.vitrolitespecialist.com/ 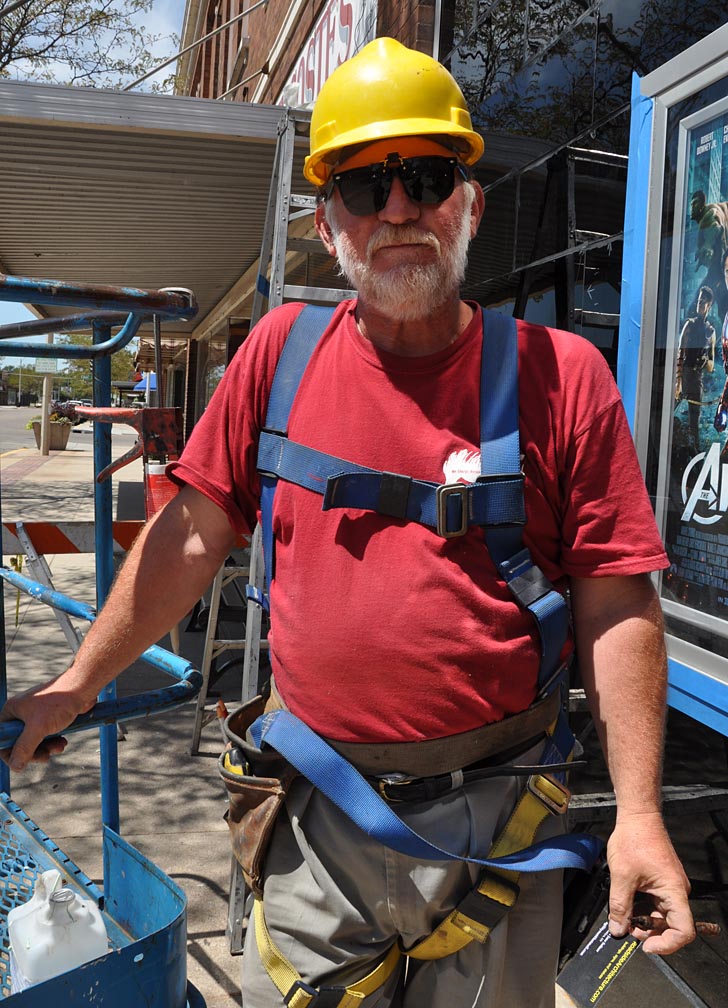 And here’s a shot of the new replica sign with the cranes down for the matinee: 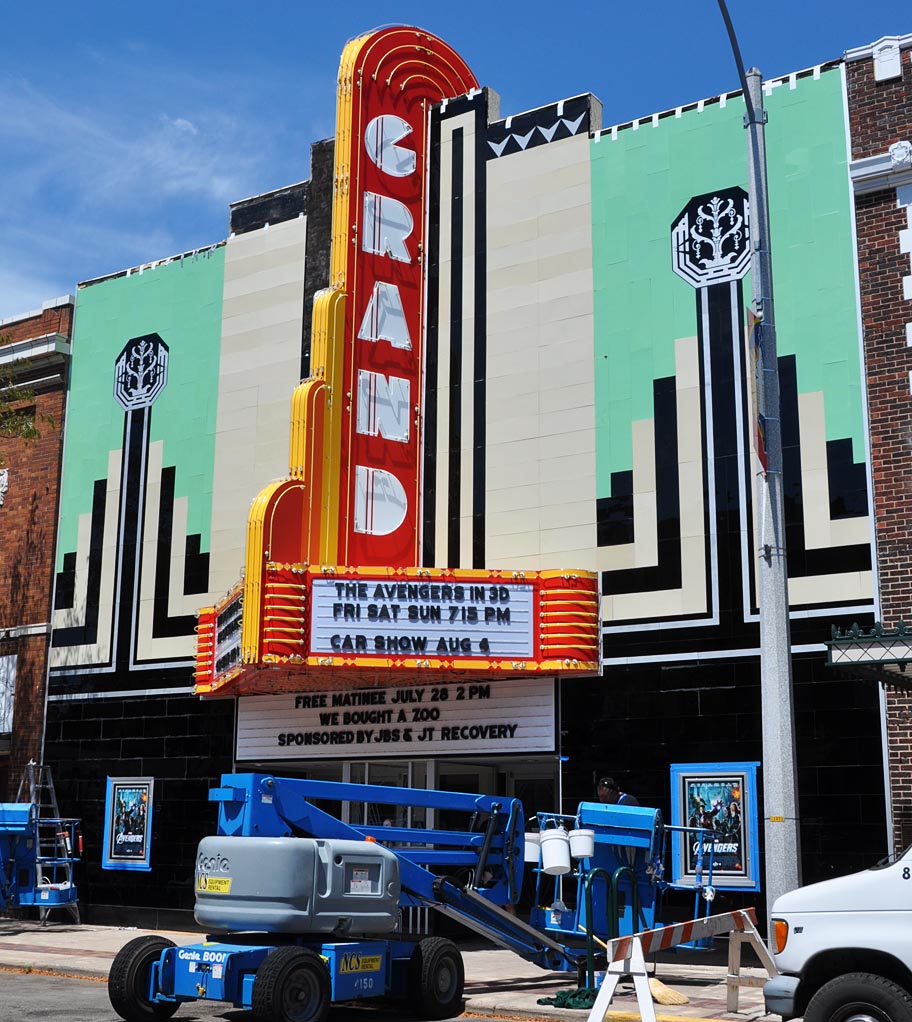 It seems about half of the Sinclair stations in Nebraska have the dinosaurs on their roofs.  The stations seem so modern that I suspect these statues are still being produced: 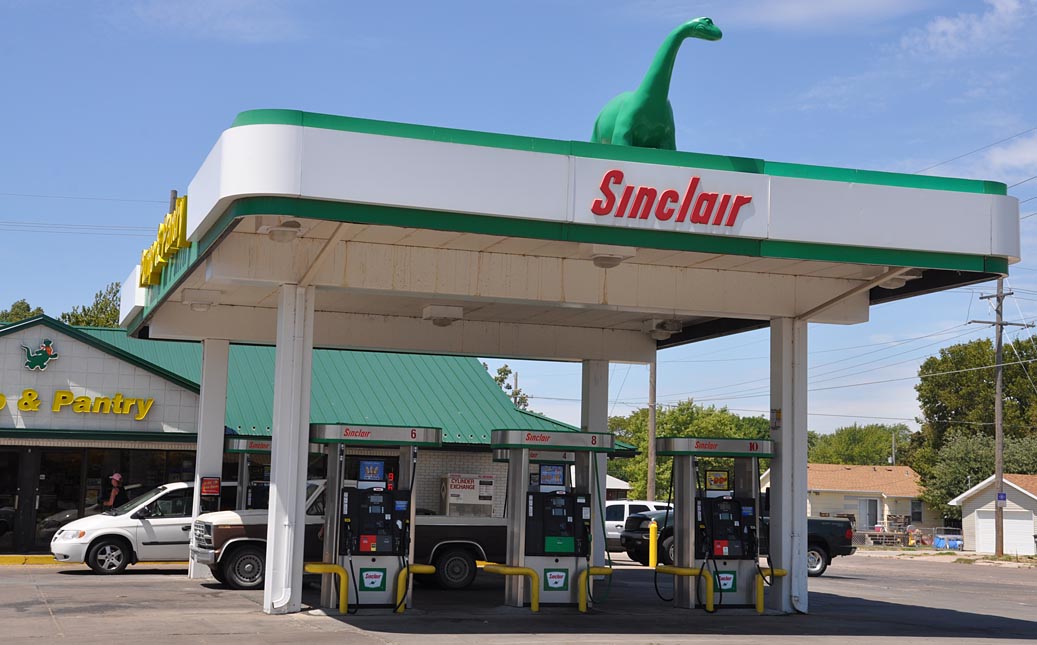 One more from Grand Island — the Antlers Motel: 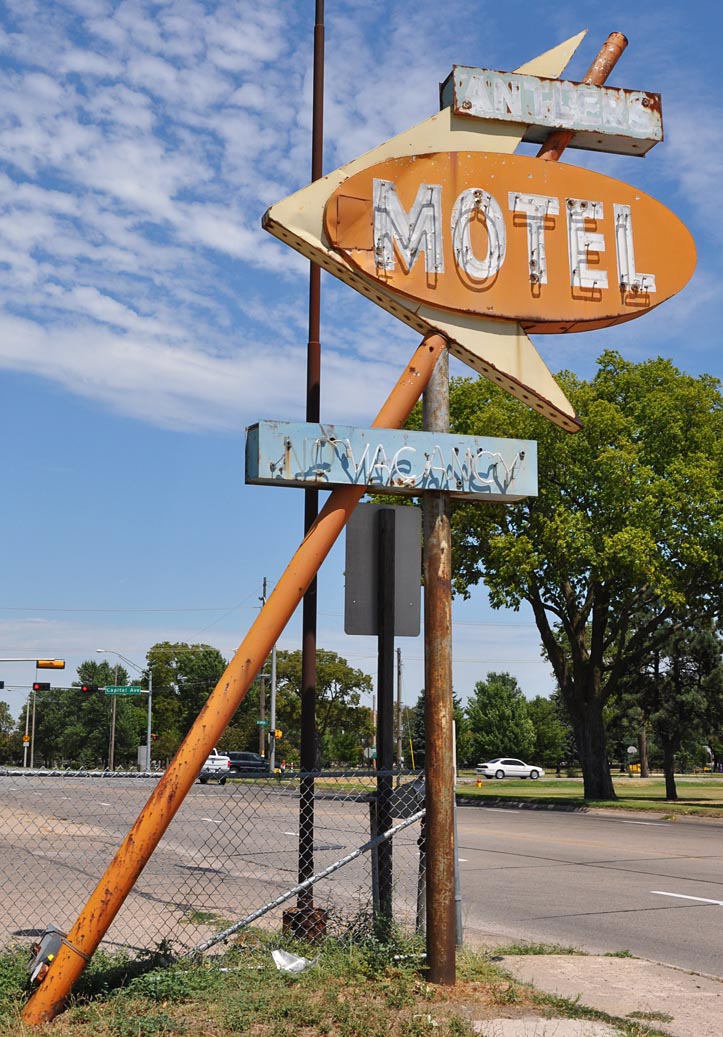 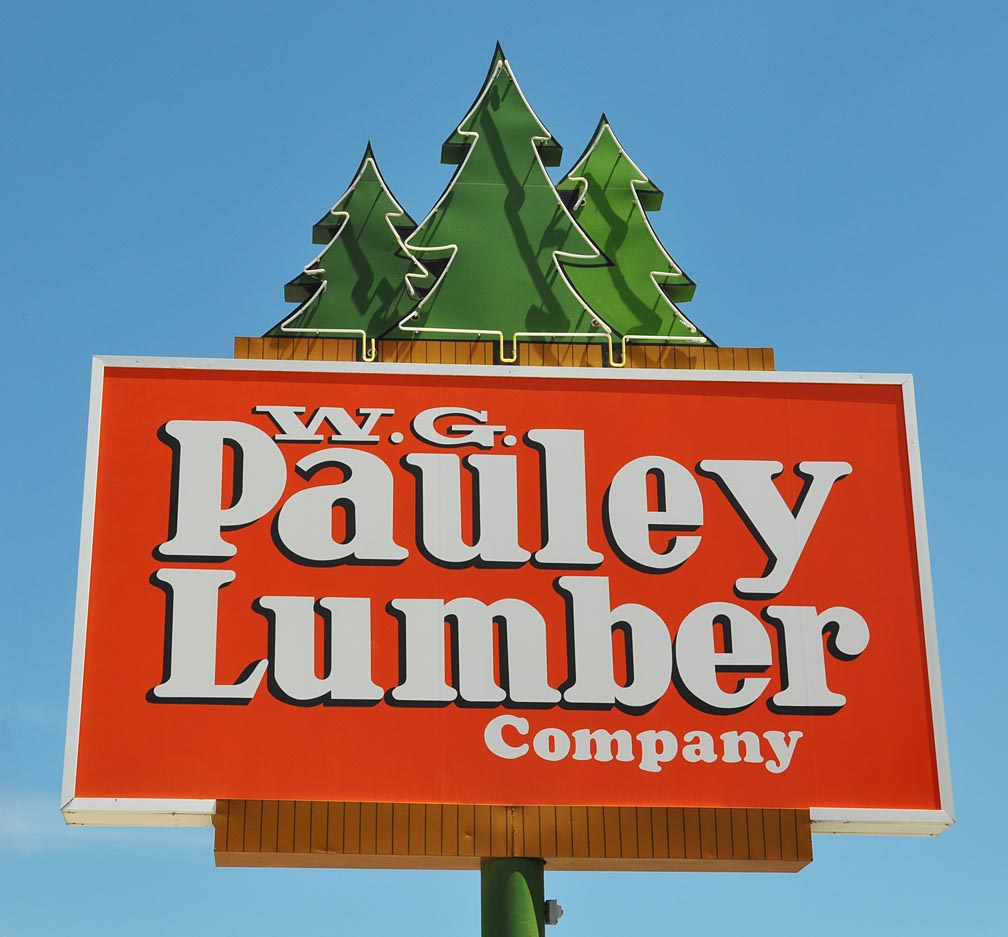 From Minden — Harold Warp’s Pioneer Village.  I finally stopped & went INTO this place rather than just shooting the sign/building and scurrying on.   There was an old carousel there that I needed to shoot for the website.  The building might look car showroom-y — but it was actually built for the museum. 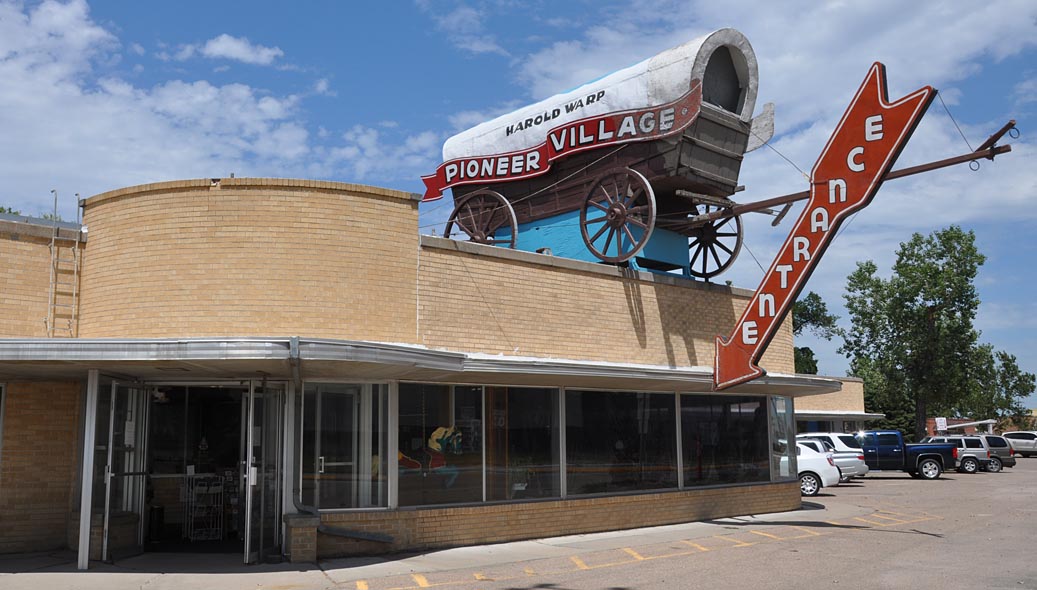 There are collections of all sorts — entire buildings moved here, guns, victrolas, printing presses, you name it:
http://www.pioneervillage.org/

Definitely worth the $13 or so.   Lots of old cars — dating all the way back from classic 1950s/1960s to Model Ts or As. But the one that stopped me dead in my tracks was this Amphicar.  I’ve never seen one in real life before — it seemed so small and adorable.  They were built to be driven on land and water.  Here’s more about them:
http://en.wikipedia.org/wiki/Amphicar 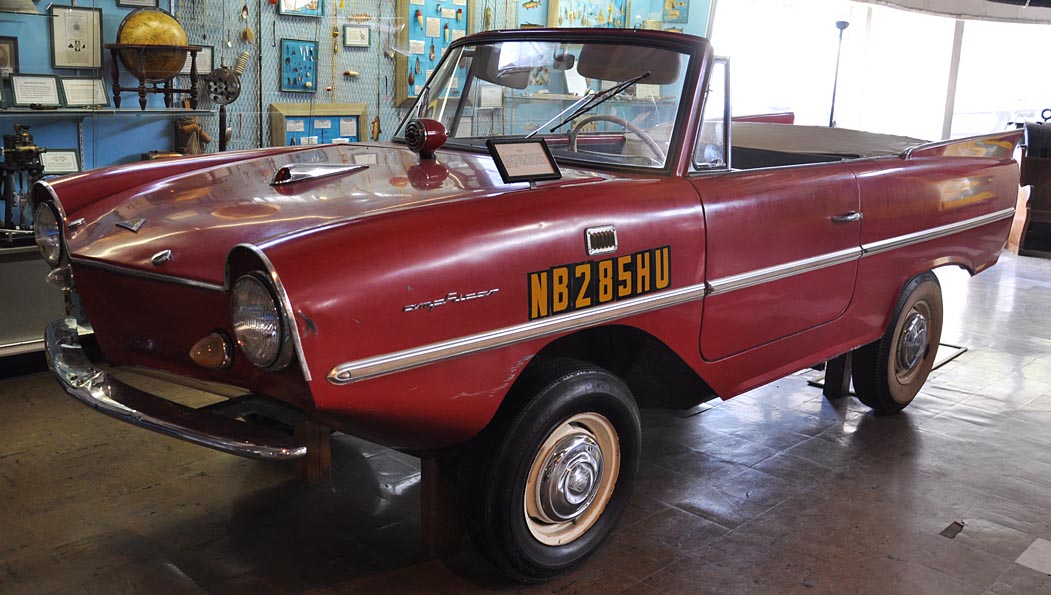 Note the propellers in back: 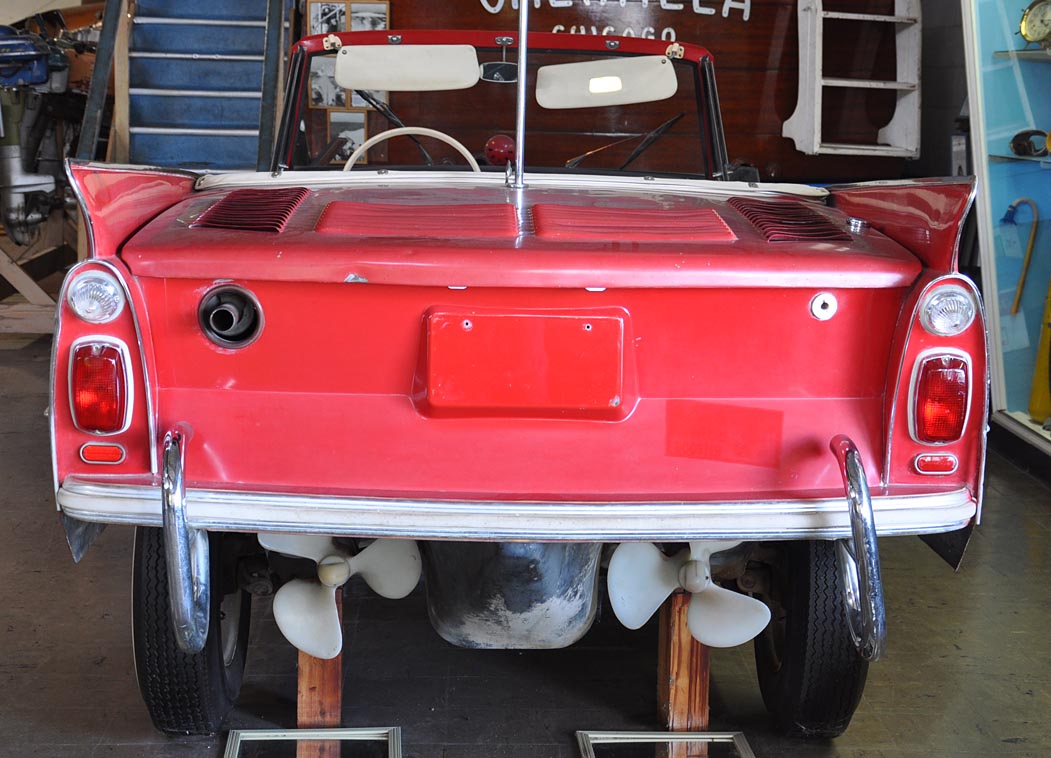 And I never knew there was a Valentine diner here.  It was originally installed in Kearney, NE in 1947.  It was moved here in 1953: 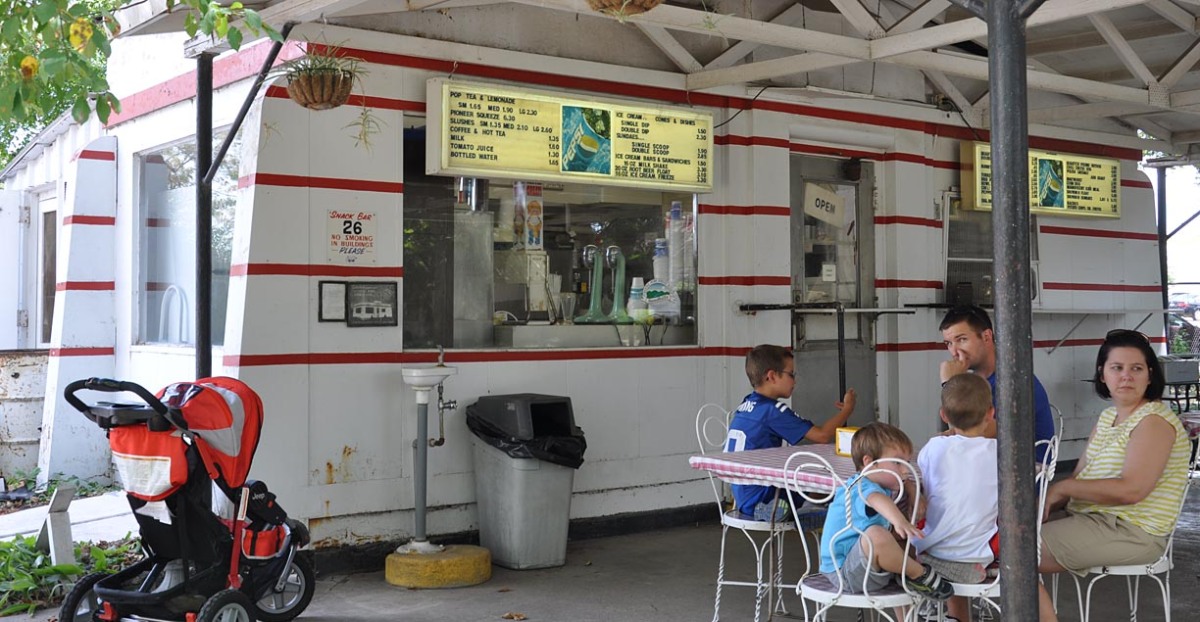 One more from Pioneer Village:  this truly neat sign: 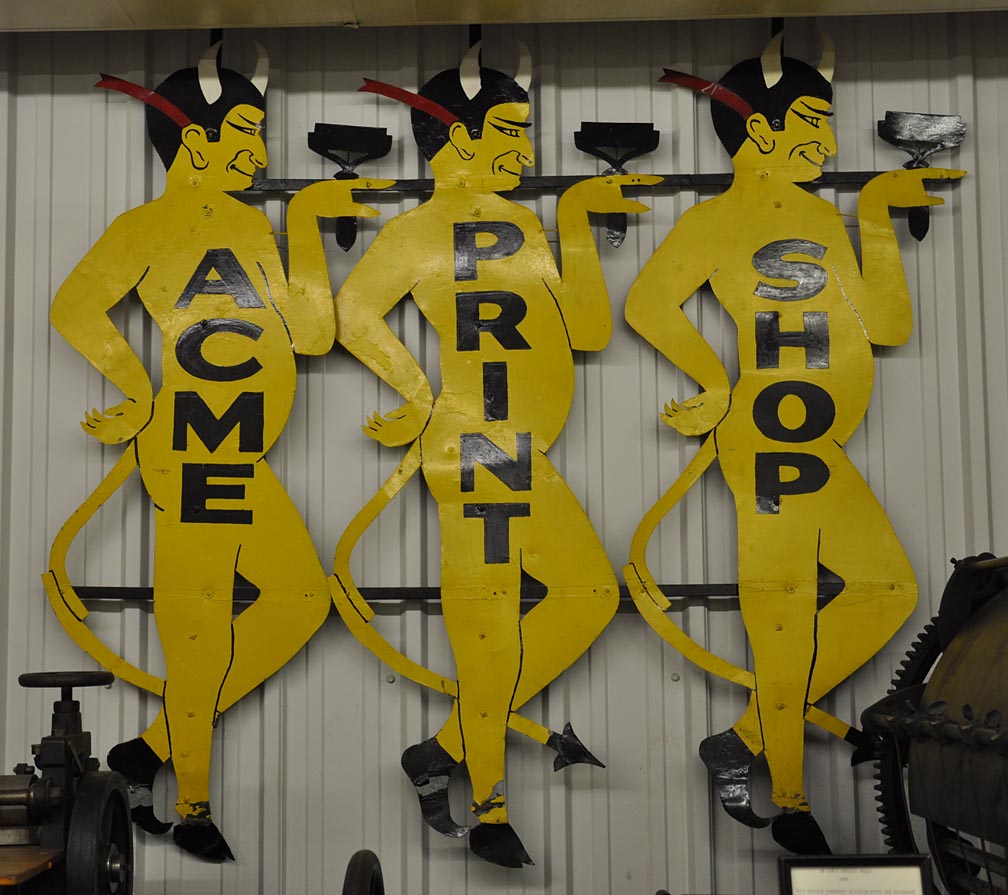 Lest you forget about my roadtripping buddies — time for a swim in the Platte River in Kearney.  Gremmie motors towards a floating biscuit chunk: 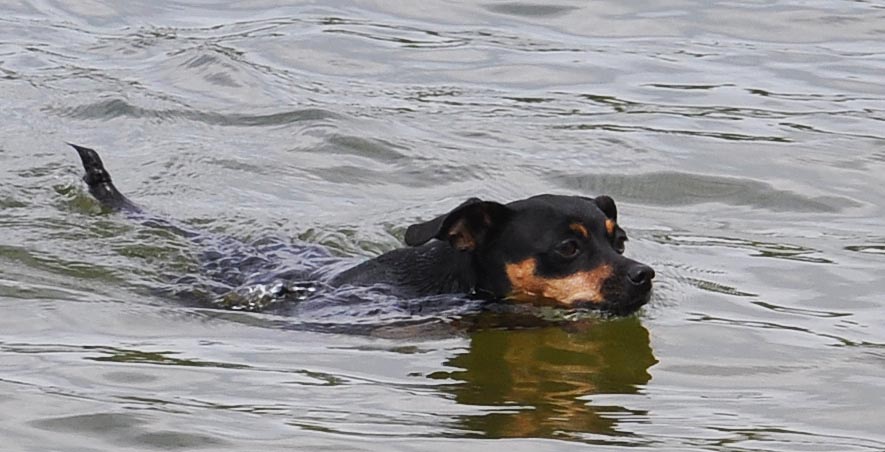 Fixie tells me how she feels: 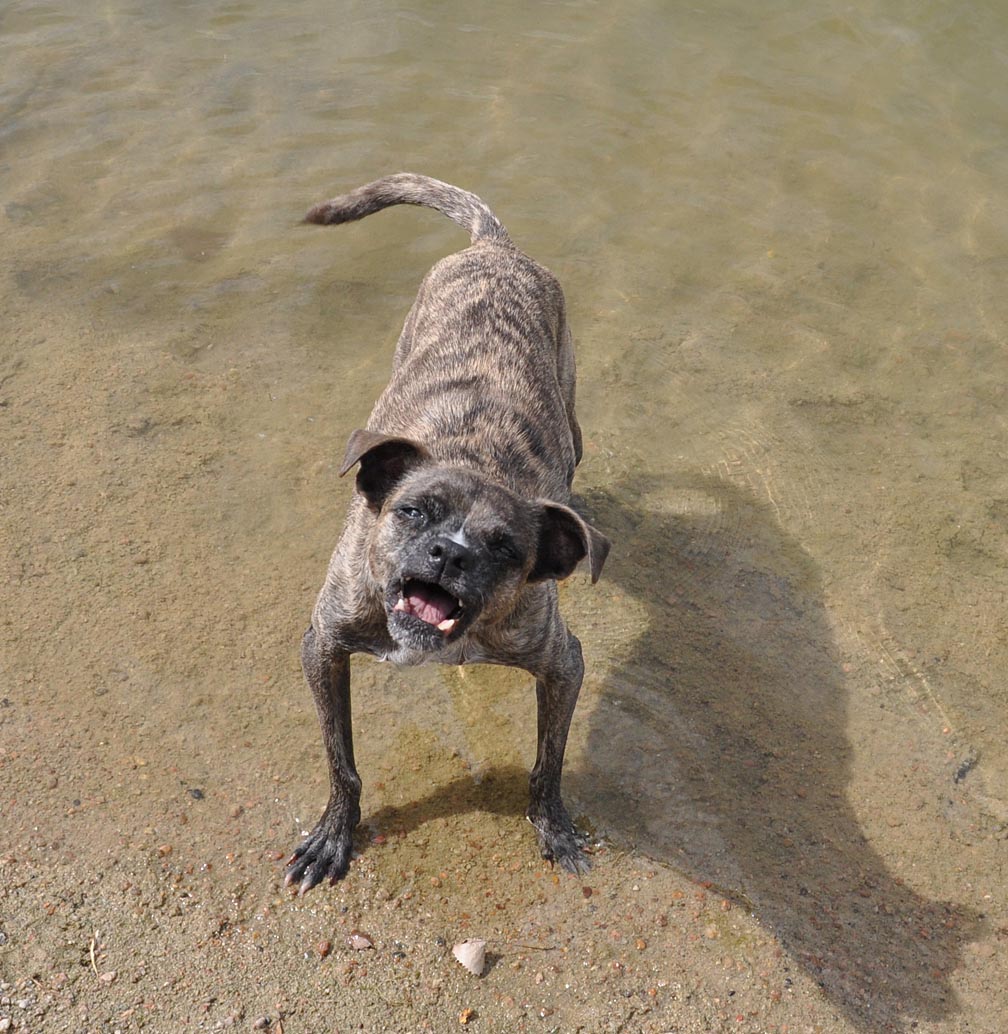 Grippie with lots of spring in her step — 15 and blind and doesn’t give a damn: 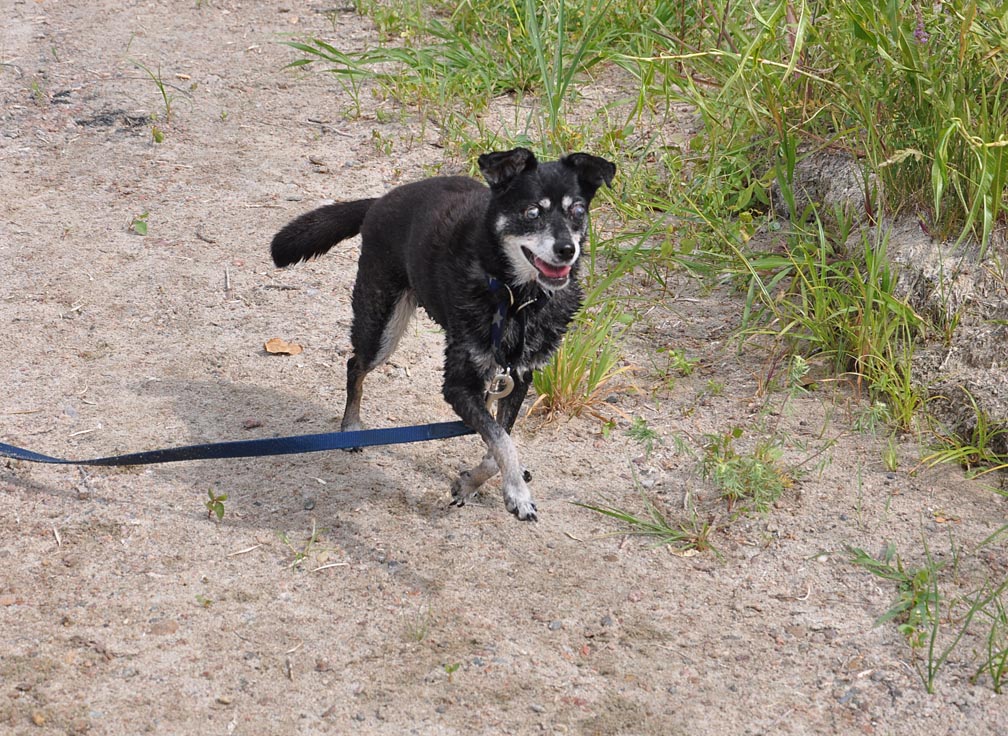 Meanwhile, Nik’s out there, nearly blind himself, totally missing the toy that is inches from his head.  Luckily, he knows right/left, come/back so I can direct him to the target: 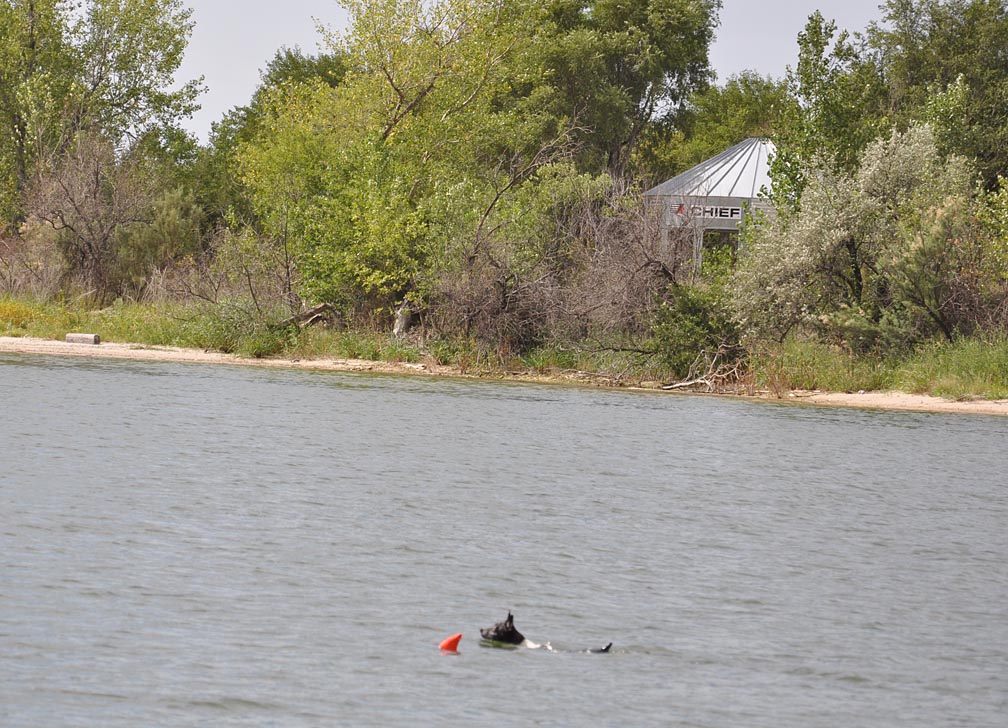 The new vision challenge has not diminished his obsession with retrieving one bit:

On to Gothenburg — I guess this qualifies as a scaffold sign even though it’s not on a rooftop: 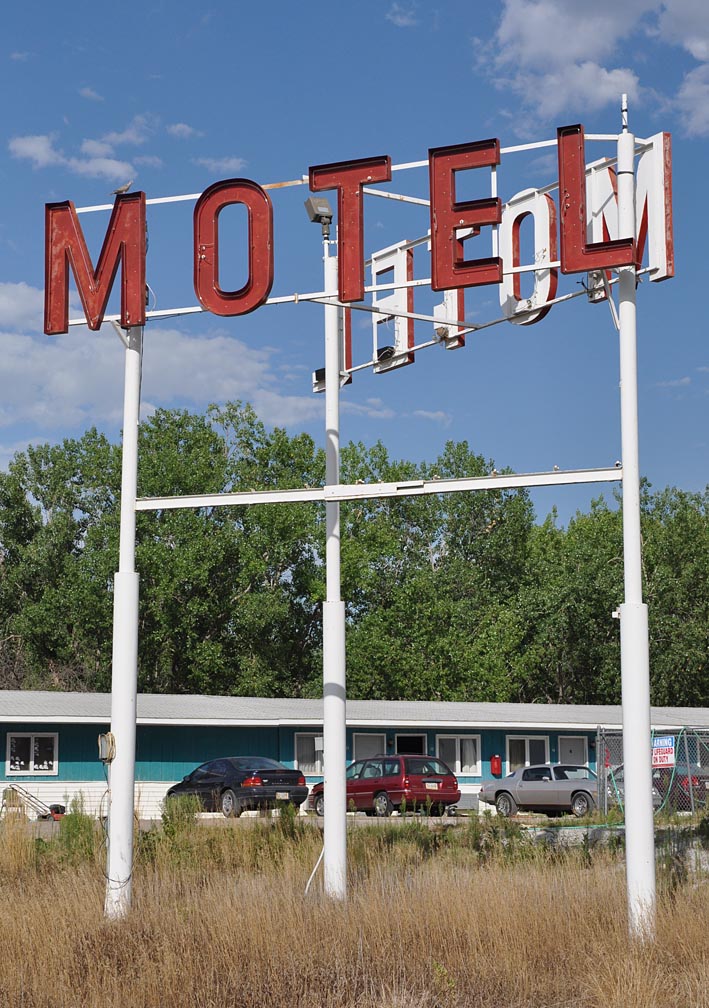 From McCook — I practically stood on Sparkle’s roof for this one — and still couldn’t get the entire bottle in the shot: 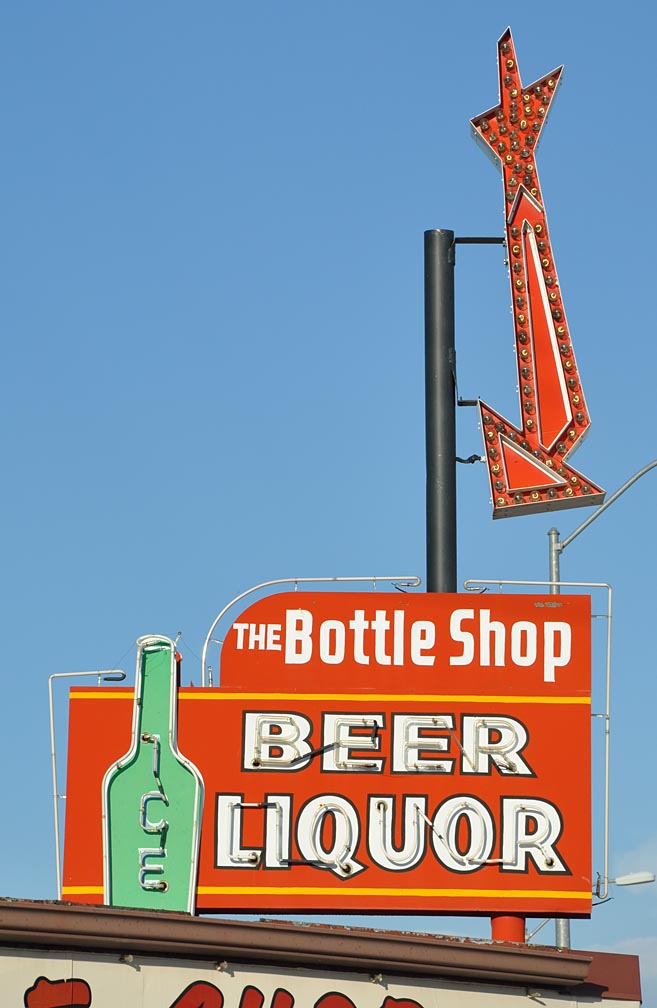 And finally, a photo-op from Gothenburg.    Note the “Headin’ West” which is appropriate for this trip — and the days yet to come (nearly four more weeks to go folks!): 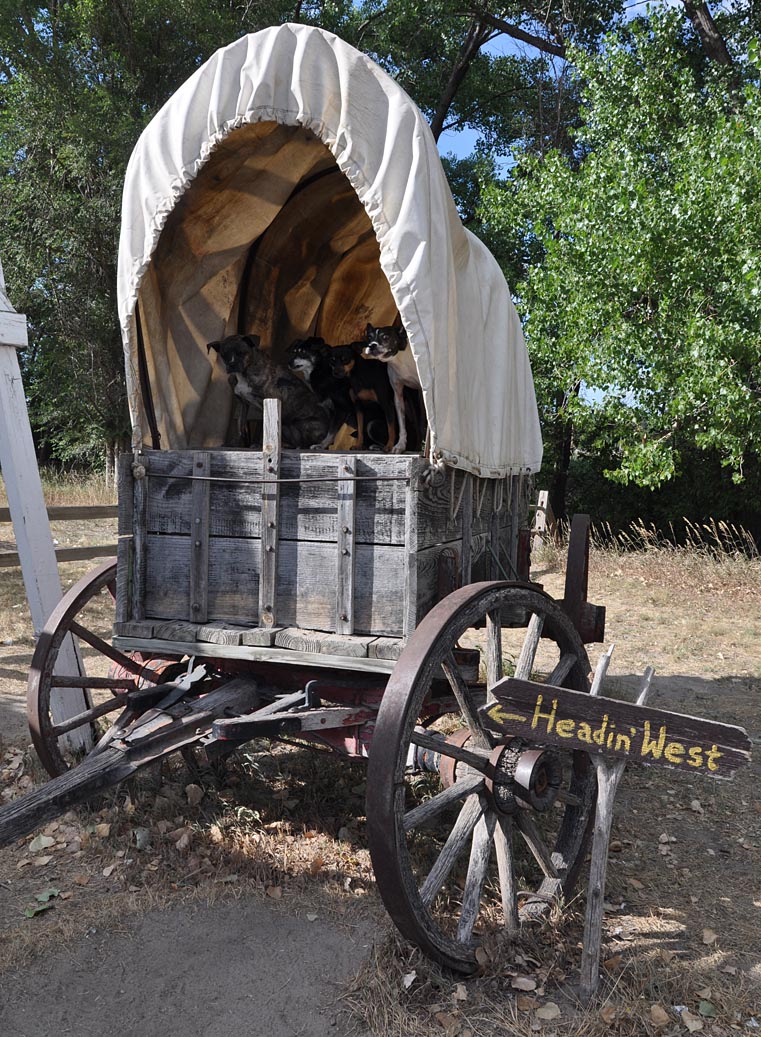 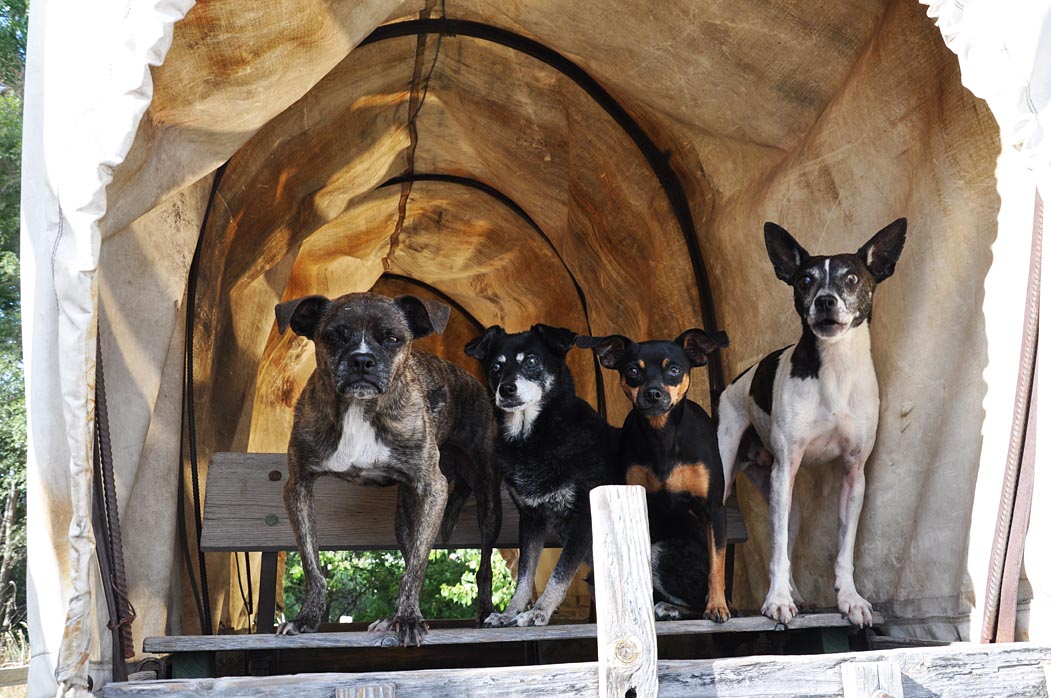 That’s a wrap.  Hope you enjoyed this deluxe post.  I can’t promise this many photos every night.   I know I have to shoot some gooey desserts or some kind of food for you.  Any other special requests?