Farewell Firestone and Orland Park!!  I was there 7 am and outta there by 8.  Seems the “doghouse” (the big box in the middle console where the access to everything mechanical is) was not put back right.  You score again guys!   So, since it wasn’t tight,  the noise & hot air was coming at me after yesterday’s “repair”.  I told my saga to Firestone “Consumer Repairs” today — a very nice guy who actually apologized and was very compassionate.  There’s a chance, sounds like a good one, that I’ll get reimbursed for the $788 A/C repair bill back in Albuquerque since that’s where this mess began and was first botched.  I should know within 48 hours.

The weather was cooperative as well today.  I got 12 hours of shooting in — for the most part in the sun.  It was a killer: 104 degrees or so.  The only times I let the kids romp was at water sources.  I found two big lakes at deserted corporate parks.  I sometimes worry about chemical treatments — but when I see birds, frogs and fish all frolicking — I figure we’re okay.  I only stay about 15 minutes because I figure beyond that is time enough to be noticed and have the cops arrive.

It’s already past 1 am because I wanted to be properly positioned for tomorrow’s last leg of Illinois.  If things run smoothly the rest of the trip, I still have another big chunk of Chicago area to come on the way home.  But I’m calculating that we should be in Iowa by noon at the latest tomorrow.

Back in Chicago — the hands have fallen off this temperature clock.  A one-time spinner with the other side having a time clock.  There must’ve been something else to this sign to the right of “Bakery”:

Usually these plastic food signs are so unappetizing — this one’s rather nicely done:

This one’s a real downer.  The 50 foot tall Kiddieland sign was once a thing of pure glory and delight:
http://www.flickr.com/photos/jlmiller/2716870783/sizes/o/in/photostream/

When the amusement park closed in 2009, the sign was put up for sale.  Eventually, it was donated to the Melrose Park Historical Society.  They vowed to restore and reinstall it someplace.  Well, they have, sort of.  But, it’s a real heartbreaker.  Volunteers for the group worked on the sign — removing the neon and patching things up & repainting themselves.  They meant well.  But the results are nothing short of tragic.  The detail on the figures is gone.  The neon on the “Kiddieland” part of the sign was replaced with little cheapie bulbs.  The pole looks to be PVC pipe.  And the top of the sign is missing entirely.

Originally, the boy and girl had neon on only one side of the sign so the figures would appear to be chasing each other around the revolving pole. 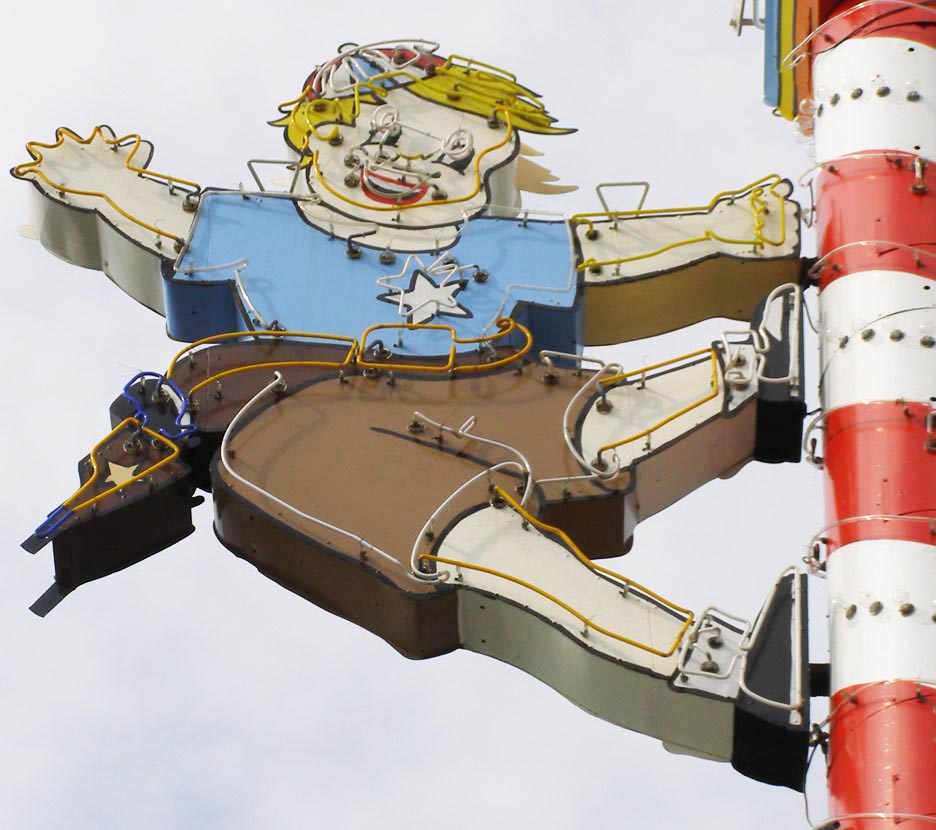 What’s left of the sign today in the Melrose Park Library parking lot.  Flat and lifeless.  All the blood’s been sucked out:

Here’s a surviving sign in Melrose Park — even lit during the day: 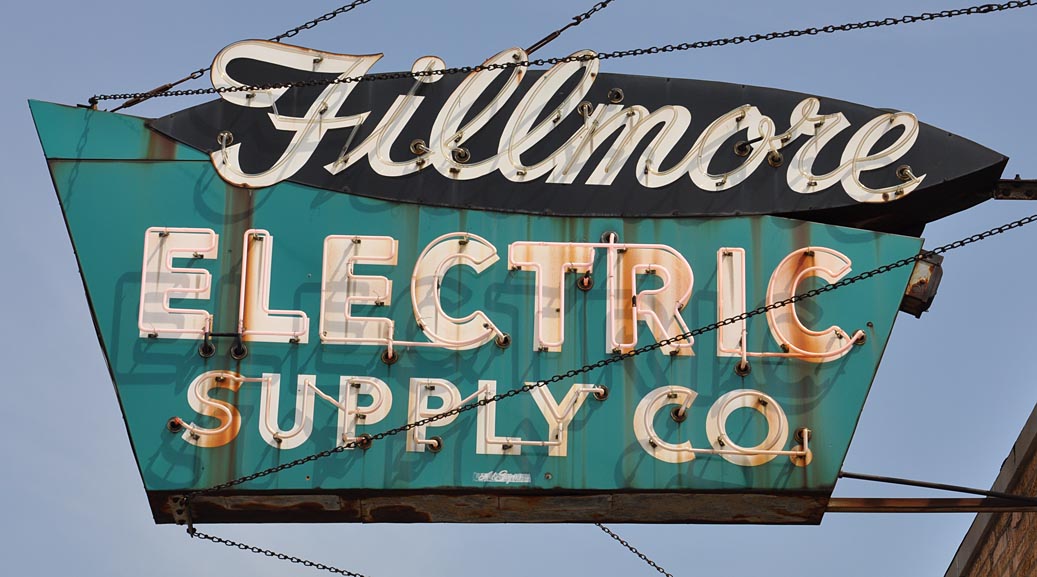 I went to check on the Little Miss in Aurora — it had been a few years.  I held my breath — yep, still there!!

A little washed out from the sun — but still a fine specimen.  Still a bit of her weathervane left.  More about these signs towards the bottom of this page:
http://agilitynut.com/eateries/dq4.html

And since it was 100+, I had to show some support.  Rather than shooting in the sun, I chose to pose this shot on the fifty-year-old stainless window counter.   I went with a Blizzard instead of my standard Peanut Buster Parfait.  What a mistake.  It was tasty but so filling I haven’t eaten anything else since and I feel like I’ve gained five pounds.  And that was a small.  I think there was something smaller like a mini or a kids — which I would recommend instead.  How do people even eat the bigger sizes?  This was from their chocoholic menu — something called Candy Shop with little miniature candies in it.  Very cutting edge — this flavor just came out this month:
http://www.dairyqueen.com/us-en/eats-and-treats/blizzard-of-the-month/

From Morrison — the only thing left of this drive-in theatre is the sign:

A happy Dutch fella in Fulton:

And last one for the night.  Sometimes in my relentless attempt to squeeze as much as I can into a day, I have finish up with some crappy washed out photos.  Even though this one will be un-useable for my website really, I can share it with you here.  This is a former Studebaker dealership in Mendota.  That’s the moon over there on the left.  No photoshop-ing here — just my usual autosetting with the flash:

Tomorrow big plans for Iowa.  But…. in the course of writing this post, I did some driving around and have experienced several startling “bucks” from Sparkle.  From experience, I think this misfire could be a spark plug or wire — or some sensor.  Which means I might have more annoying downtime very soon.  Crap.  A recurring nightmare.  I just had all the wires replaced in El Paso a couple of months ago.  There’s also the possibility that it could be cheapie gas.  I had just filled up tonight with some gas from Casey’s which said in big letters how much ethanol or whatever.  But I have used that stuff before with no side effects.  So I’m not sure if I should stick to big cities for a while in case I need to dive into a dealership.  Or whether I need to get the “check engine” light first and just need to follow my list as if nothing is happening.  Too big a decision for 2am.  I probably just need to drive a bit in the morning & see how minor or major this thing is.  Stay tuned…