I got some gorgeous sun and clouds for the last day of the trip.  The morning was spent boogie-ing around Cincinnati for some reshoots and things I hadn’t known about on previous trips.  Then, it was off to the American Sign Museum for the second event:  the “Sneak Preview” fundraiser for the museum.  For those of you that couldn’t make it, the ASM will be officially opening on June 23 with regularly staffed hours.  Don’t balk at the $15 admissions charge — it’s far cheaper than an amusement park and so, SO more exciting.  This place is fan-tas-tic and deserves your support.  I guarantee you will learn so much about signs and their history from your tour guide.  And you will have a blast.  Go!
http://www.signmuseum.org/visit.asp

After the museum, I hit the highway.  I drove til around midnight then pulled into a truck stop interstate plaza and slept for about five hours.  Back on the road and got home around noon.  Which is great since it gives me most of the day to repair my life.  Much better than my Monday morning arrivals where I have to drag myself into work that very night.  Before moving on to the final photos, here are the numbers for those of you that like that sort of thing.

Tickets:  None!!  Except for the red light ticket from the accident from the heartless & diligent Silver City cops for $92.   And a parking ticket in St. Louis for $35

Number of photos taken:  6,011
553 photos appeared at this blog.  Another 492 photos were uploaded to the Flickr agilitynut account.
And more than 5,000 of the photos will appear at the website eventually.  I will barely make a dent before the next trip.  But you will be able to follow my project at the “What’s New” page:
http://agilitynut.com/whatsnew.html

If you haven’t been following along at the Flickr account, you’ve missed out on a LOT of this trip:
http://www.flickr.com/photos/agilitynut/

“Value” of this trip:  Priceless!   While I spent a lot of time in the shop and had some grey days, I’d say 90% of the time was awesome.  The dogs would say it was 99% awesome (the other 1% being when they got stickers stuck in their paws in the desert).  Besides all the amazing buildings, signs and statues, I have many doggie moments that will stay with me always.  Seeing them happy makes me ecstatic.

One little event that I didn’t tell you about which I shall remember forever.  In Gila Bend, at dusk, I was letting the dogs have one last run for the day.  A big open area of sand and some desert version of shrubs.  Grem, who’s been very good all trip, went missing.  I was calling and calling and starting to panic.  Fearing she’d be eaten by a coyote or some other animal if out there overnight.  I noticed lots of holes in the ground and the thought of rattlesnakes crossed my mind.  I put the other kids in the van and started calling her name more crazily.  Freaking.  I knew there was the possibility that she was off digging somewhere for some underground rodent-like animal.  In the past, she would never leave such a challenge.  But after about 10 minutes, here she came a-running, from the direction I wasn’t looking.  All panting and covered with dirt and the biggest grin I’ve ever seen on a dog.  Who knows.  I just gave her about a half a pound of cheese for coming back.

On with the photos —

A sign with everything:  corrugated plastic, plastic letters, a neon and bulb arrow:

A lot of fun details:

And the restaurant has yellow porcelain enamel roof tiles — plus a chicken topped weather vane.  I wonder how many restaurants claim to have the “world’s best fried chicken”?

Back to Terry’s Turf Club for some daytime shooting.  I don’t know of any Jerry’s Restaurant signs that are left on display (except this one).  I believe they all used to be part of a much larger sign:
http://www.flickr.com/photos/agilitynut/424727513/

Inside Terry’s, there are two or three of these (functioning!) Bevador coolers:
http://www.vintagevending.com/jewett-bevador-cooler 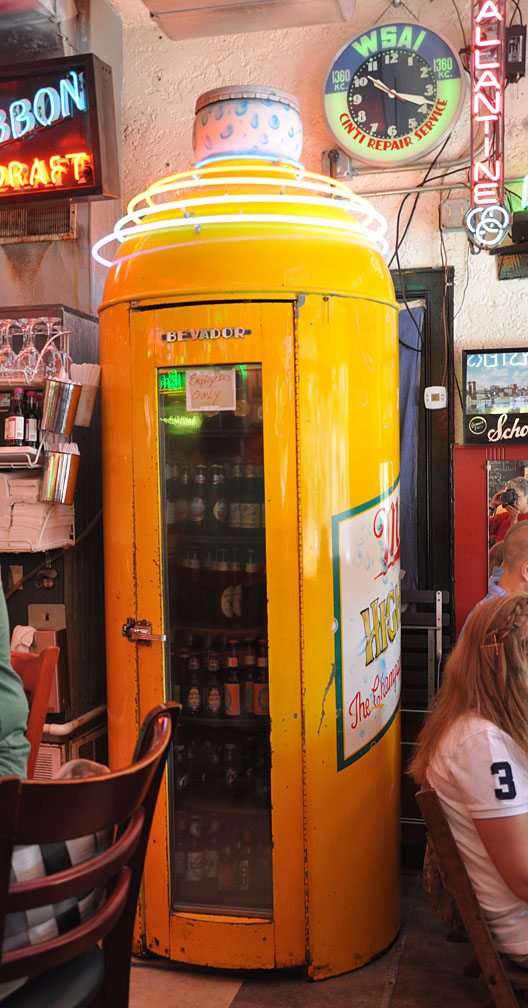 Off to the museum.  They had changed the letters on the message board of the sign at the entrance to the parking lot for the event:

Inside — another shot of a “Main Street” storefront: 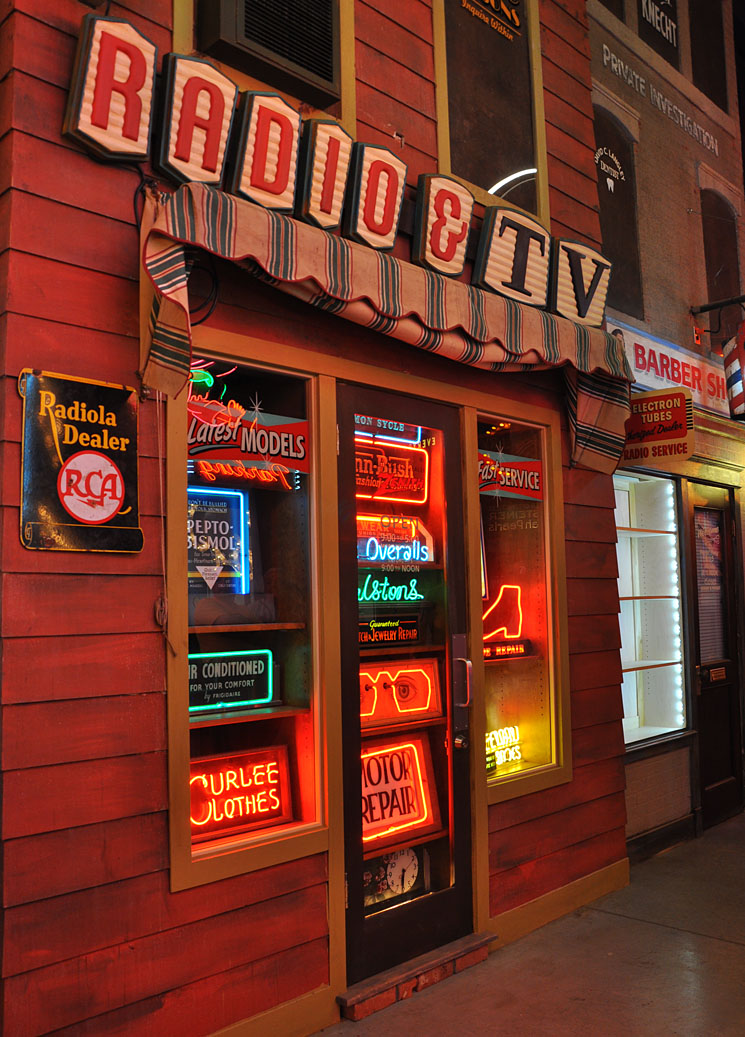 A detail shot of a textured glass backlit letter:

And then… home.   The approach to NYC via the Lincoln Tunnel from NJ — a rarity without traffic.  I always associate this approach with the smell of gasoline.  My first trip to NYC in 1980 with a girlfriend and we had stopped in NJ to get gas.  I started to fill up and the pump handle came off in my hand.  Gas exploded out of the hose everywhere and I was drenched.  The guy ran out of the office all cursing at me.  I didn’t know you couldn’t pump your own in NJ.  So I guess that pump was out of order without a sign.  I didn’t get to shower for a couple hours and luckily no one around me lit any matches.

I try to avoid the Lincoln Tunnel since it has more traffic on the West Side Highway to Brooklyn — and a longer view of the Hudson River.  But I got in the wrong lane and, oh well.  This is just before Nik and Grem started screaming at the top of their lungs and embarrassing the hell out of me.  I thought you might like the taxis in the mirror: 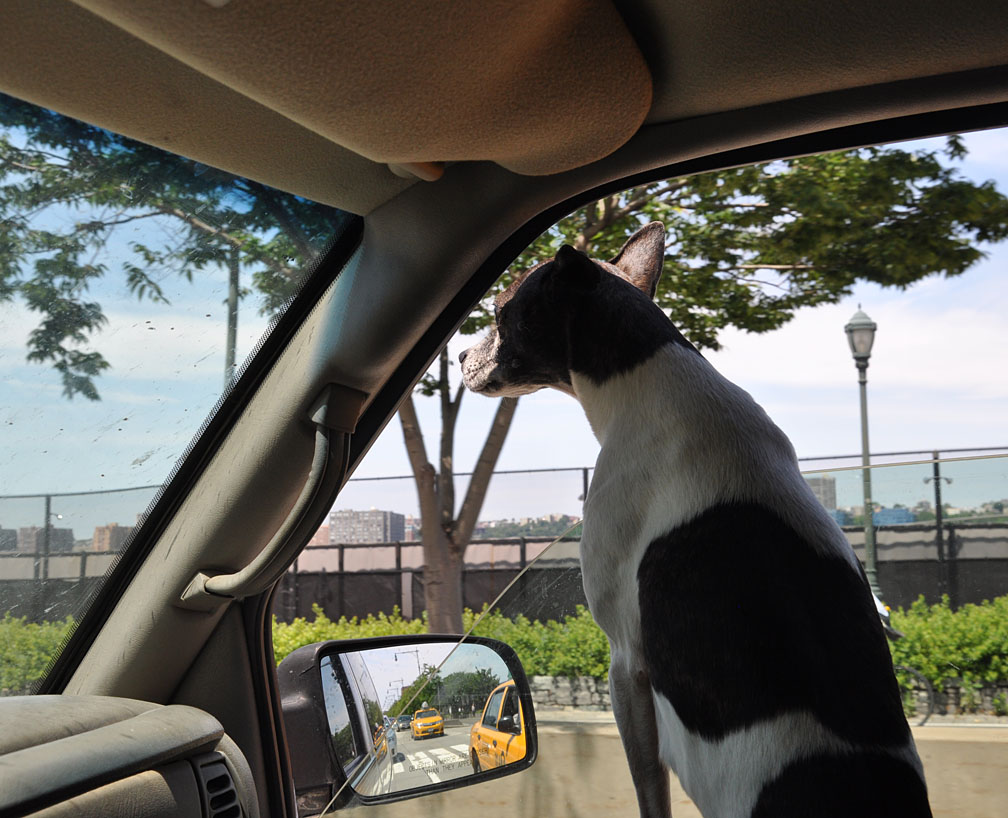 Meanwhile, Fix knew from the aroma that we were home.  “Thank God!” she would’ve said.  She likes these trips okay — but I think she’d prefer to stay home where there’s more interaction with people, grass, and no hail.  And you sleep in the same bed every night.  And meanwhile, Grip slept in my lap through our entire arrival, even with the barking.  She was exhausted. 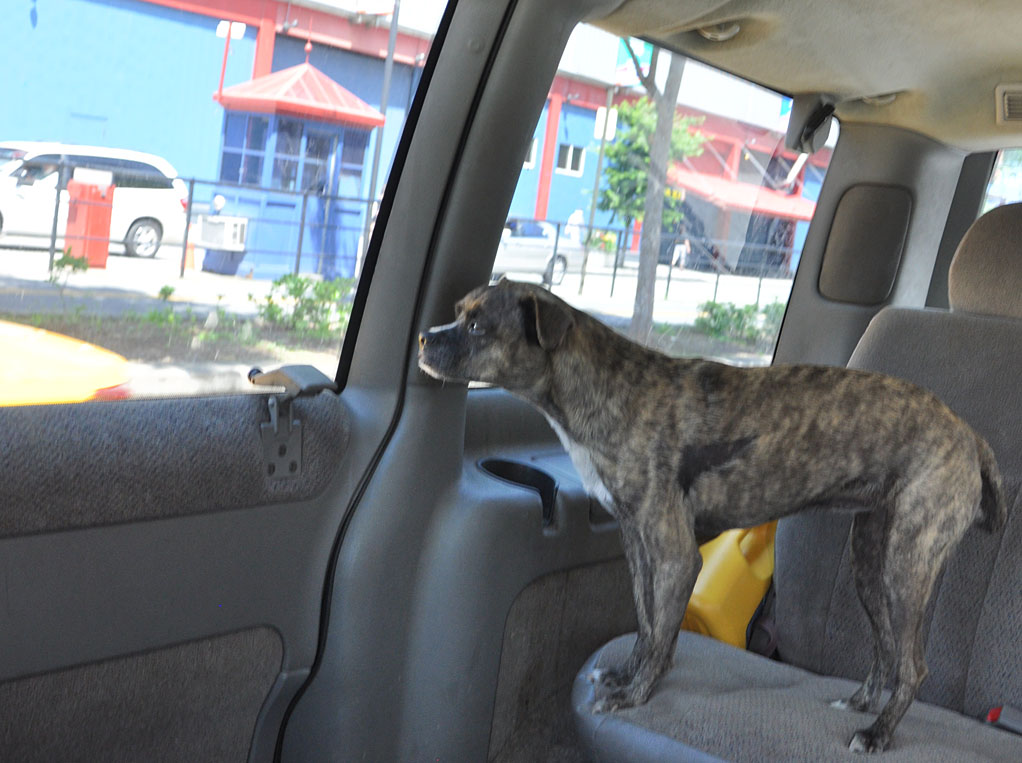 While stuck in West Side traffic, I got a view of the progress that’s been made on the new World Trade Center.  I can’t believe how long it’s taken — but lately the progress has been quick.

And then out for a quick stroll around our neighborhood.  When we left, this fountain on the circle next to our building was still off and people were wearing winter coats.  I had forgotten that it would be summer when we got home.   Funny, how that happened.

When’s the Next One?

The dogs and I will be hitting the road again in a mere six and half weeks.  The focus of this trip will be Colorado and Wyoming.  There will be some Utah and probably Montana in there.  As well as other states en route.  This will be another five-weeker.  37 days, starting on July 21 if you want to mark your calendars.  After that trip, I’ll be buckling down, working on adding about 10,000 photos to the website — while working at my “real job” probably six and seven days a week to pay for these trips.  If you still want to donate to the Sparkle Repair Fund (not too late) or just make a general donation to my efforts — that’s always greatly appreciated.  There’s a “Feed Sparkle” button on the upper right of my webpages — which takes you here:
http://www.agilitynut.com/donation.html
Or you can just go to PayPal and send whatever amount you want to the agilitynut@hotmail.com account.

I hope you enjoyed tagging along on this trip and are inspired to get to some of these places or others before they disappear.  See ’em and shoot ’em while you can folks!  It may seem from my blog, Flickr stream, and website that there’s a lot of stuff out there.  But that’s only because I plan my stops and route like a maniac so I can shoot the most stuff possible.  Some of the stuff is usually gone just a year later — sometimes, even before I get home.

See you here again in a few weeks!