A pretty sucky day weather-wise.  The sun finally came out at 4pm.  Luckily, I was not in big cities with tons of stops that would have to be repeated in sun one day.  But still, there were long distances between one-fer and two-fer cities that will need to be repeated in sun another time.  So, I don’t know what’s more frustrating — same sort of time & gas money lost.

But we’re chugging along here.  No exciting dog parks — not even swimming today (sorry guys).  Some stickers that need to be pulled out of paws.  Tonight, we’re in San Angelo and according to my calculations, if all goes well, we should be within range of El Paso by tomorrow evening.  Which puts us right back on schedule.  I shouldn’t say that because that’s usually when things go wrong.

Sparkle was well-behaved all day.  Starting up just fine and running just fine.  We’ve covered about 6,000 miles so far since we left NYC.  But twice at stoplights in Odessa, she shuddered a little like she might stall.  Instantly and instinctively, from all my early years of driving constantly stalling sports cars, I just gave a little nudge on the gas and the shudder stopped.  I dropped in to a Chevy dealer to inquire about the symptom and what to do.  And was basically just given a shrug.  The old “until the check engine light comes on, we would only be guessing”.  When I asked about fuel injection, they said I could put in an additive to see if that helped.  But I don’t think I’m messing with additives — I’ve heard bad things about them.  I’ll just keep on going.  But I fear some time in the shop is coming in the not too distant future.  I won’t be doing any night driving in the desert — not to worry! 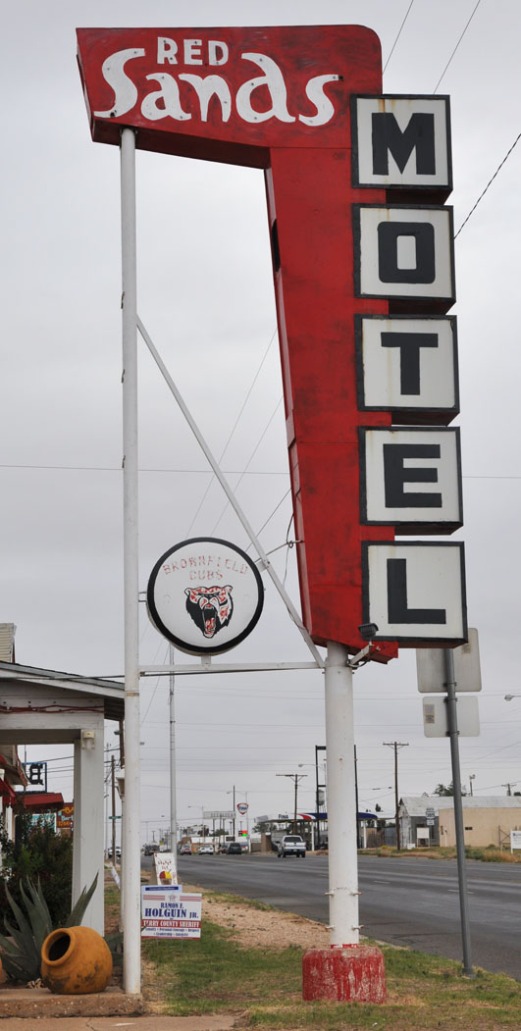 I love this hand-painted signage.  The guy with the camo and the gun though is pretty scary. 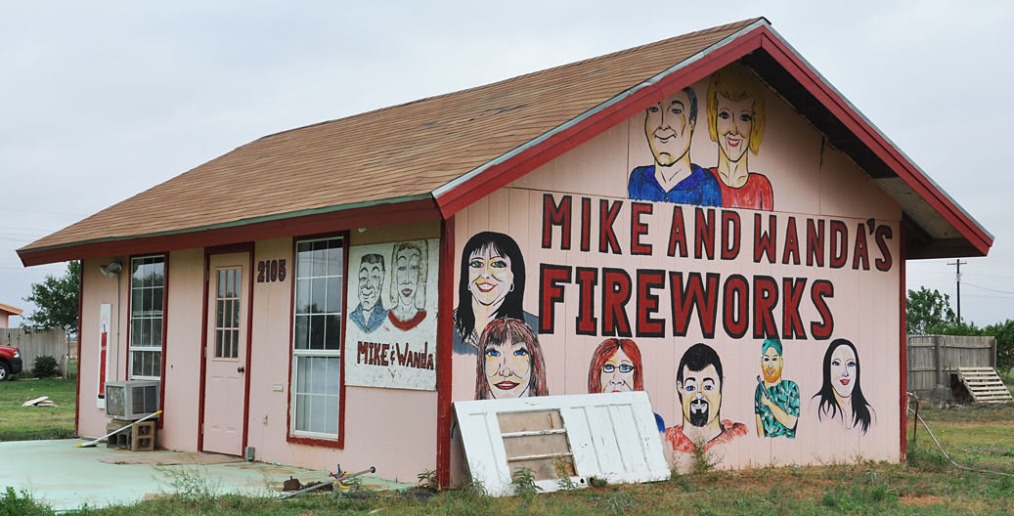 From Colorado City.  Now, sun would really help provide contrast for this one.  I’ll include it anyway.  I’m partial to any signs that are shaped like things: 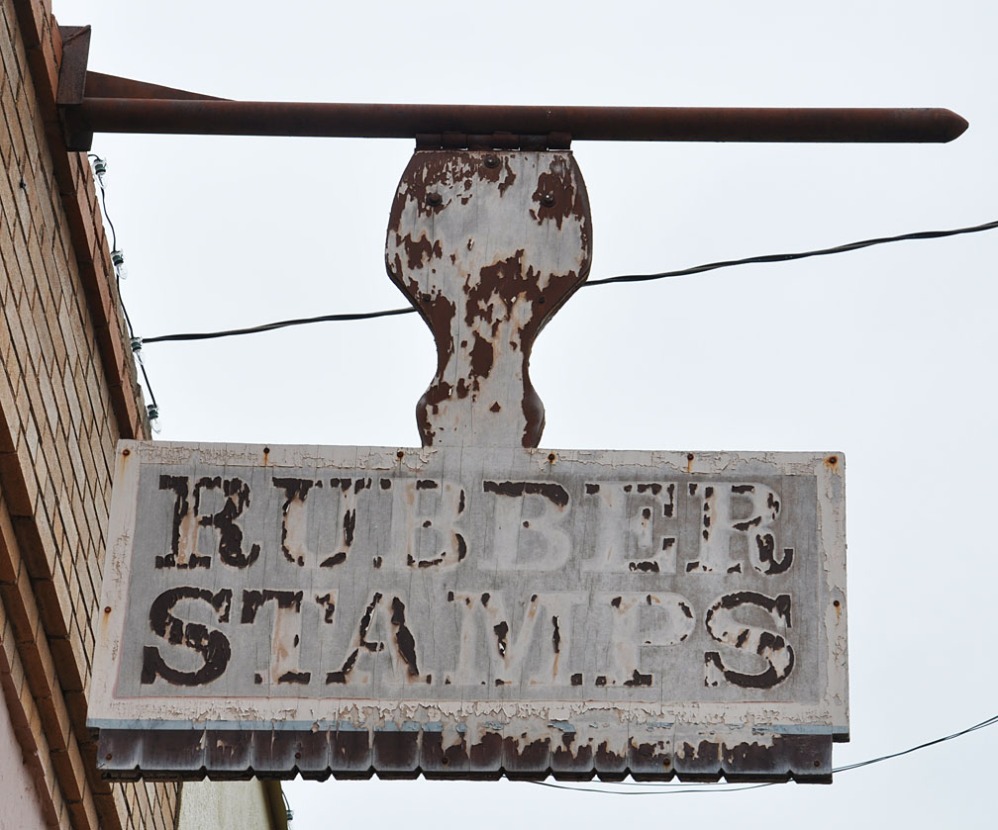 From Big Spring.  This one must be from 1974 when the restaurant opened.  I don’t think I’ve ever seen a sign with its own tile roof: 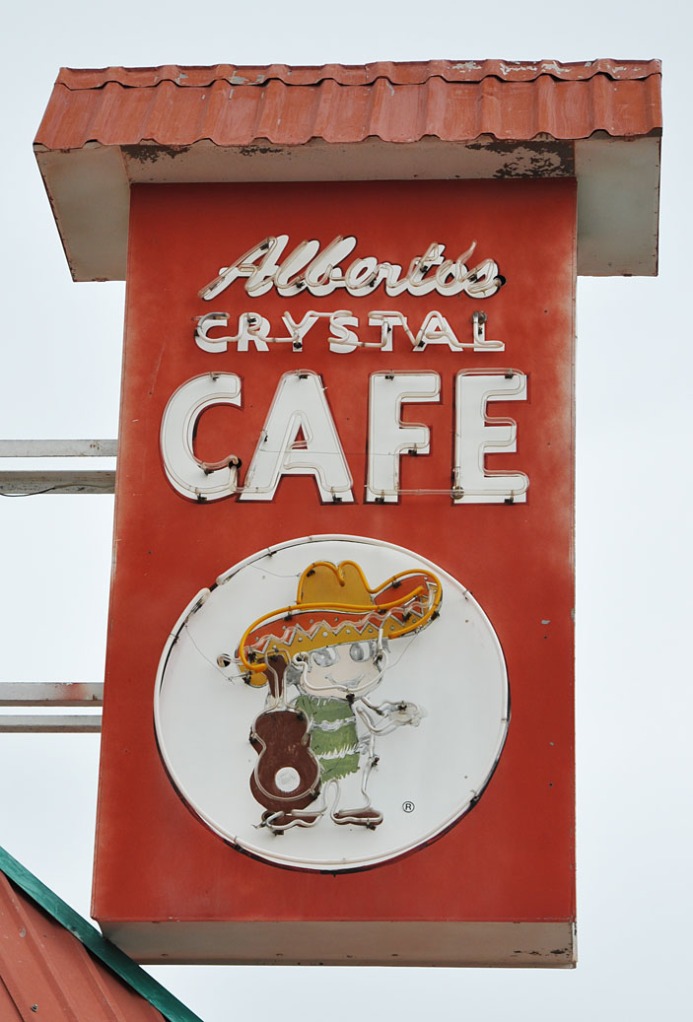 More Big Spring.  I assume there was probably a neon sign originally where the corrugated plastic sign is now.

On to Midland.  Somebody shoved another sign right in front of this one.  And then I guess they closed and that sign was removed.  Very odd indeed: 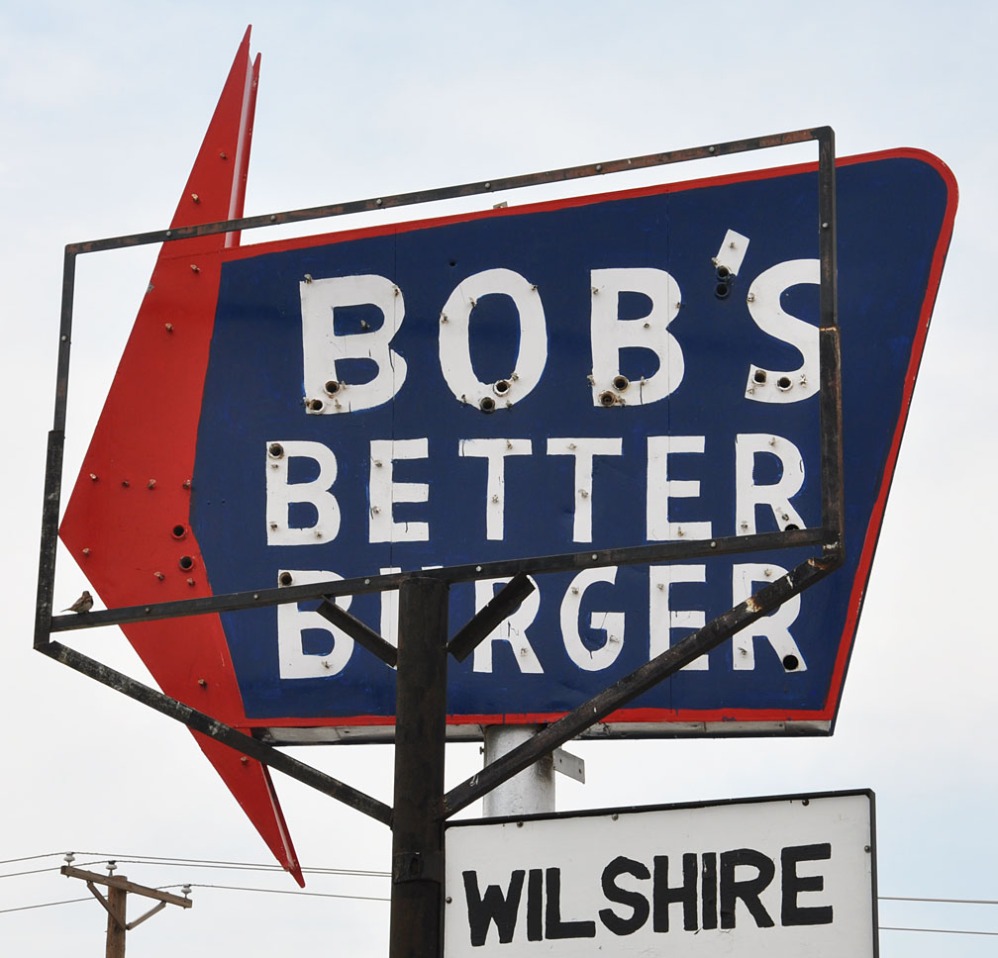 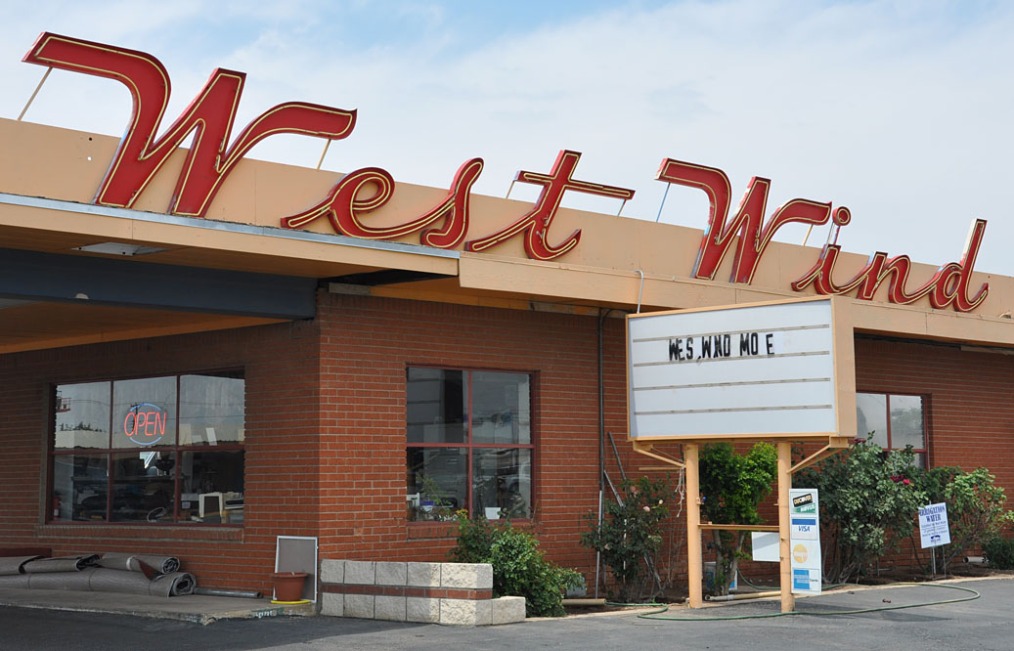 On to Odessa.  When one arrow is not enough:

More from Odessa.  Heartbreak of the day.  I guess I should’ve been prepared for this.  The store was already closed when I took this photo in 2008: 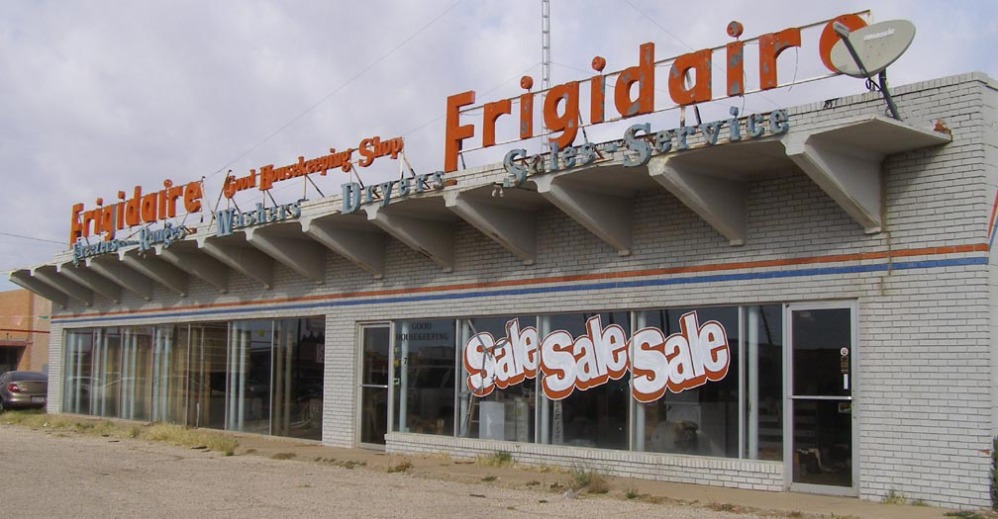 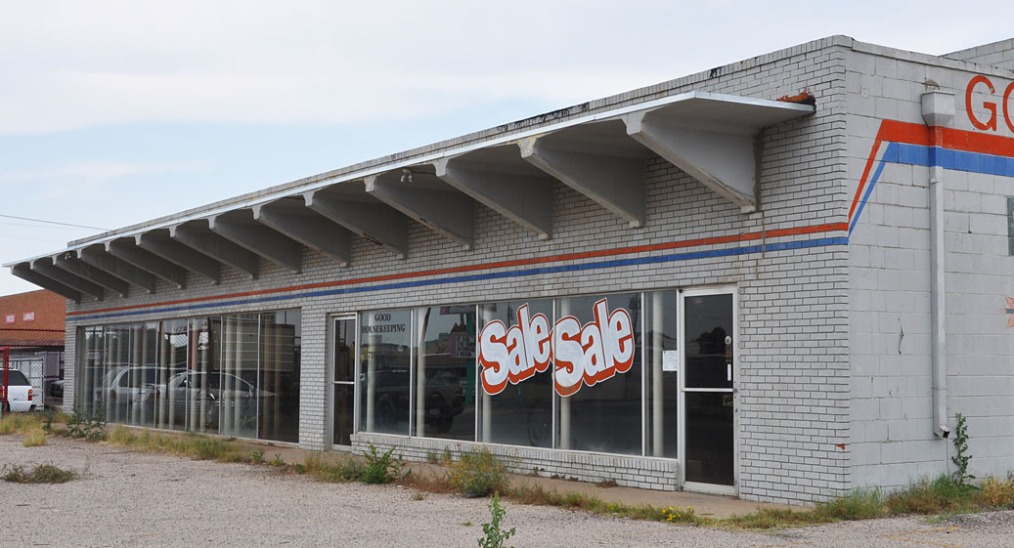 To ease the pain, I had to make a stop at this place.  How could you not?  I included it already at the blog a couple years ago, so I’ll keep it brief: 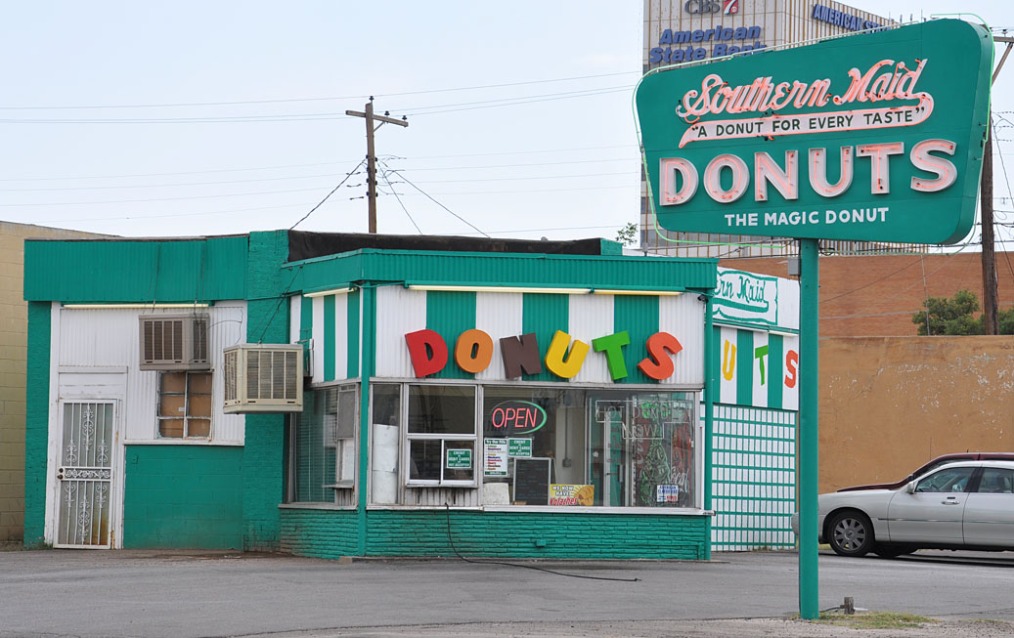 I went with Banana Nut and classic Chocolate.  These donuts are the super light crullery type.  And melting in your hand as you ate them.  I ate them both in one sitting like a pig.  Banana Nut — that frosting was like the sweetest thing ever — but then I haven’t had much sugar recently so I’m not the best judge. 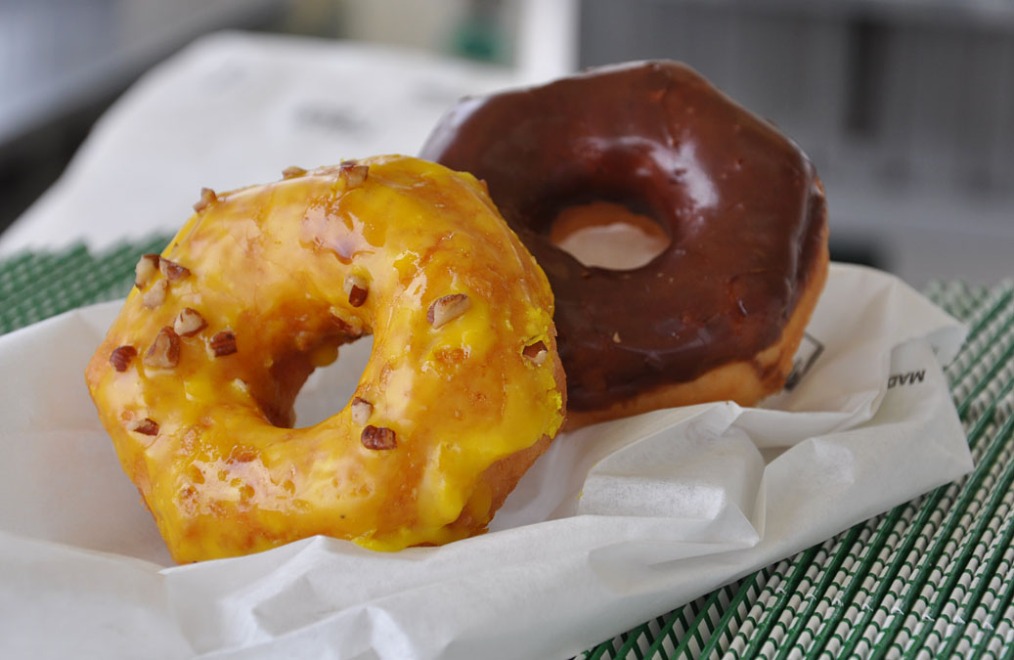 These are two side-by-side marvelous buildings with signs: 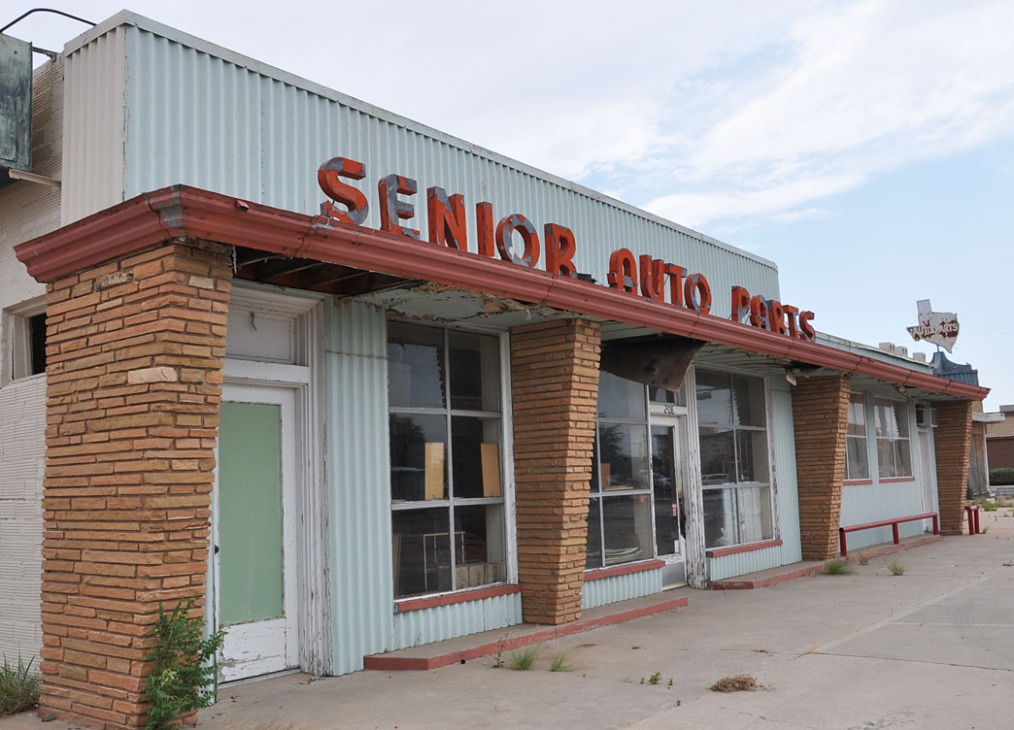 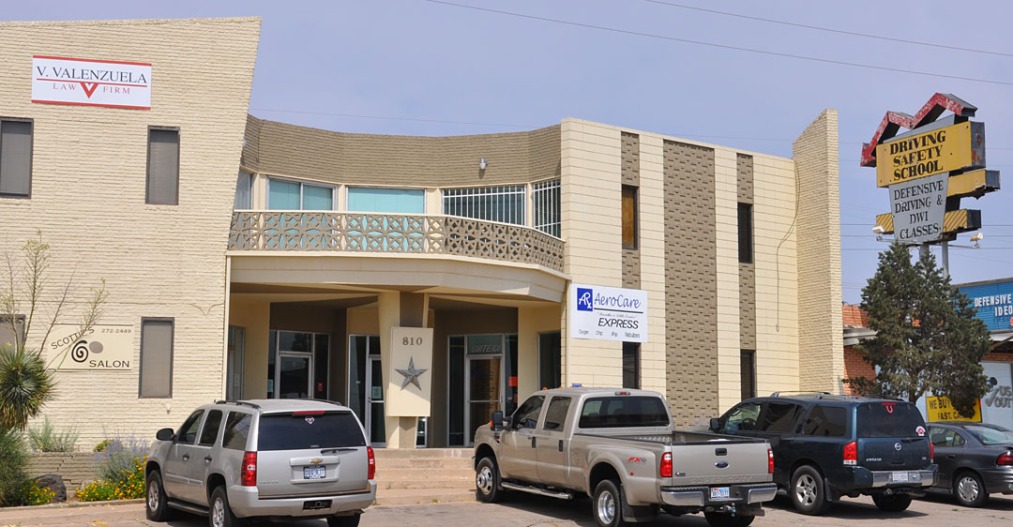 This could’ve been a Dairy Queen — but seems to wide.  I’m too fried to pin a fast food name on it.  But anyway, quite the paintjob.  I think that’s Jim Morrison & Jimi Hendrix on the side.  Best I could tell from the signs near the door on the other side, this is one of those dirty magazines & videos shop.  Although Google says it sells (or sold) discount records and tapes: 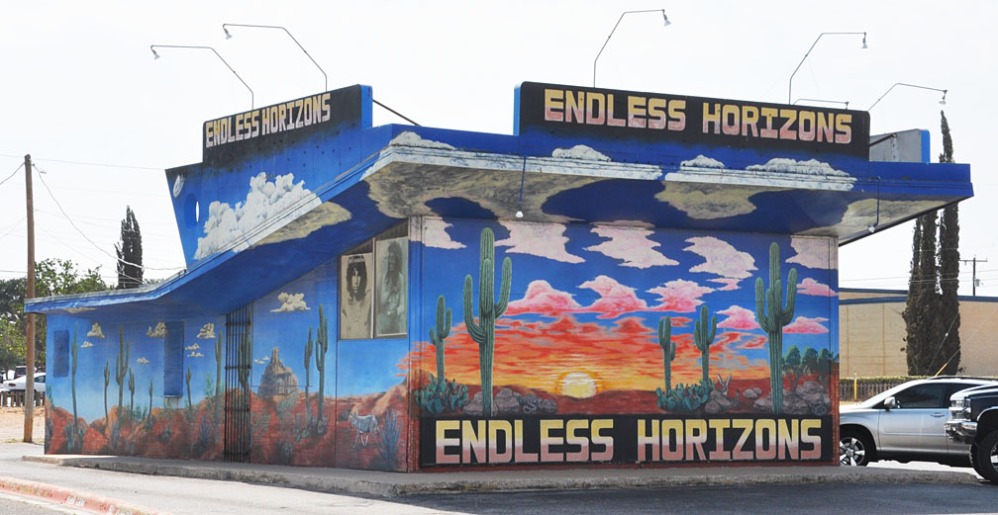 Up to Andrews — an arrow to nowhere and nothing.  Love the triangulated frame: 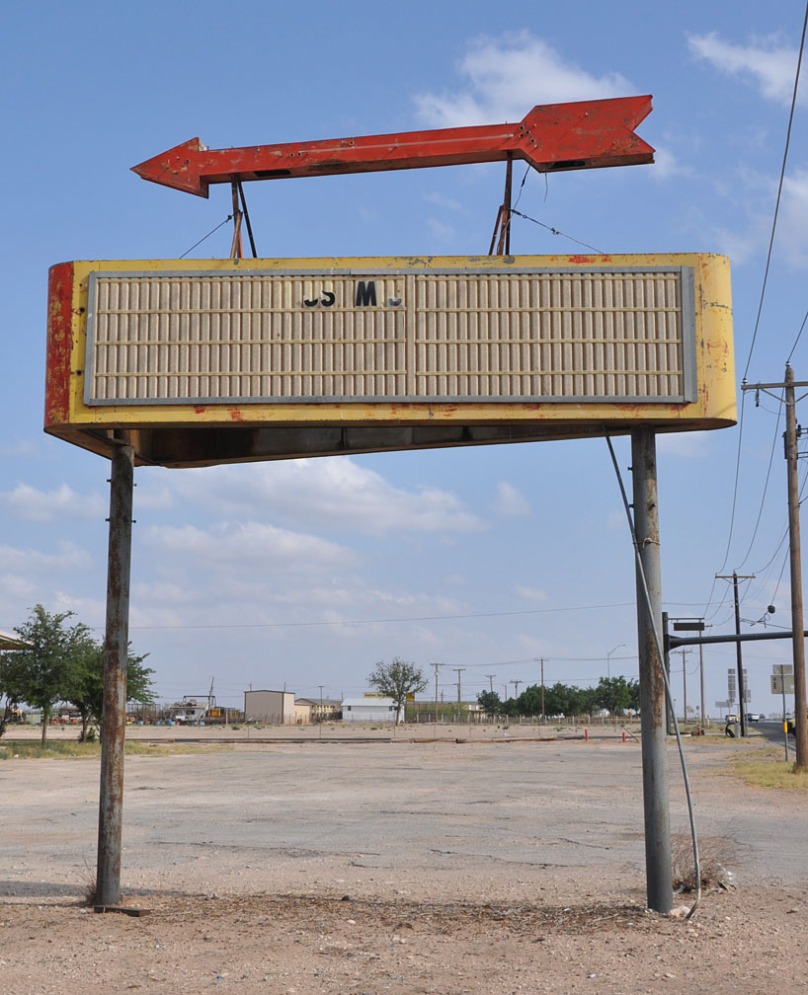 I assume it was SOMEthing originally – and is now elaborately dressed up as Yu Got It frozen yogurt place:

Love this one — esp. the bullet holes.  But the kinda place I don’t linger.  Notice Sparkle in the immediate pull out position.  I’m sure you all would be shocked where I park her sometimes.  In medians, on sidewalks, just wherever it’s easy and quick.  If I’m in an especially ridiculous spot, I put the flashers on at least.  No tickets yet! 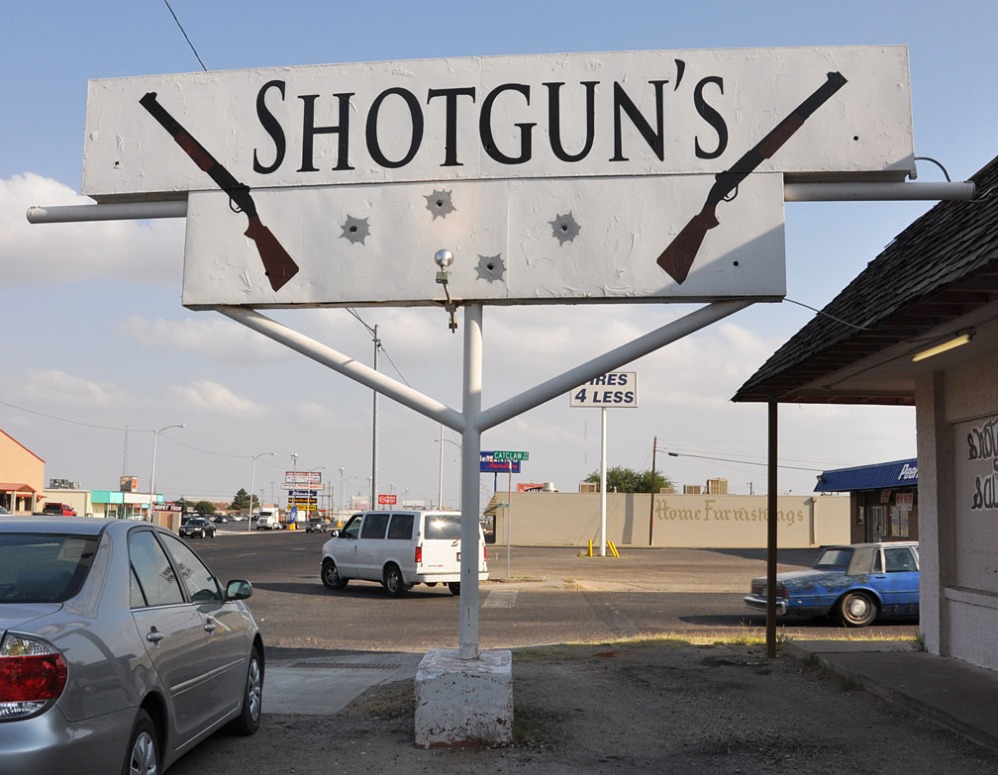 Last one for the night.  I was thinking today how much I’m craving Mexican food.  Not the Taco Bell variety but the real deal.  But this sign kind of killed that mood.  Green not the best color choice for food signs.  This was at Grandma’s Kitchen — which was painted on the other side.  That hand with the plate is kinda creepy, too. 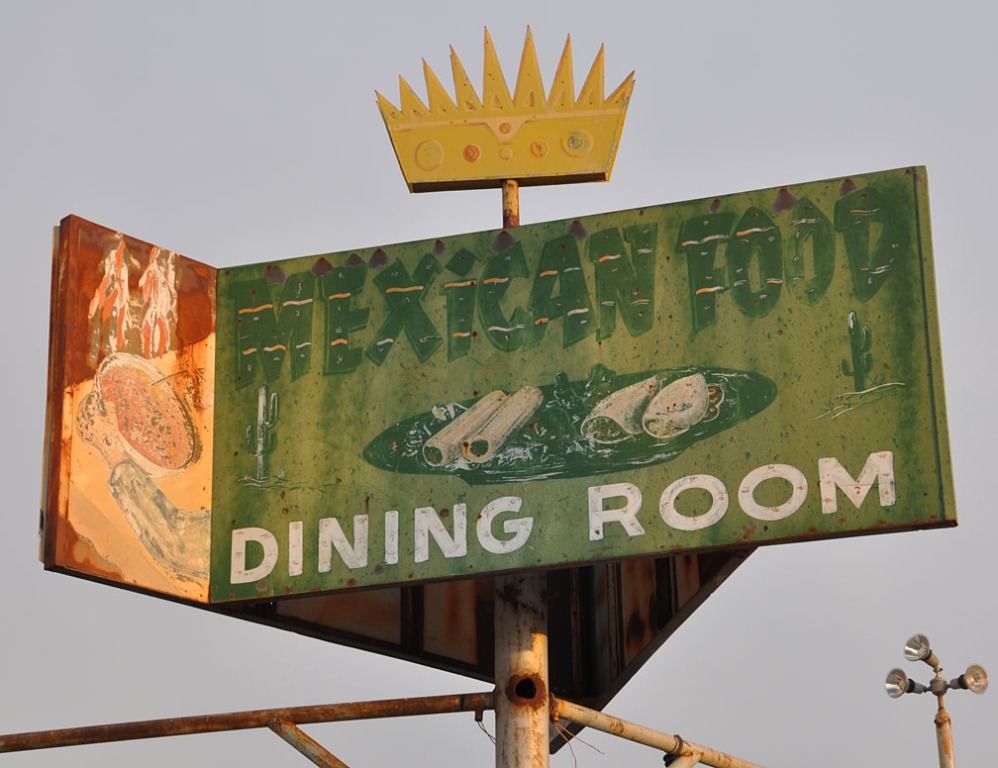 OK — now pray to your weather and car gods.  I’d like to get to El Paso tomorrow night.  I appreciate your help.