I finished up St. Louis around noon, some stops along I-44 / Route 66, and then managed to get into Arkansas for the night.  Two people with collections of stuff along the route that I couldn’t coordinate schedules with — maybe on the way home.  The weather was just gorgeous again – quite a streak now!  And it was hot — felt like 90 by 11am.  So I headed for an award-winning dog park in Wentzville that I hadn’t been to before — with a LAKE.  The dogs all got cooled off and nicely worn out.  Here’s the scoop on the park if you’re interested:
http://www.doggoes.com/parks/missouri/st-louis/broemmelsiek-dog-park

Doggoes.com is my new fave site for finding dog park.  I even have the application for my iPhone.  But I rarely use it since usually I do pretty well just stumbling upon places for the kids to swim and run.

Got set-up very late here — internet trouble — already 12:45am.  So let’s roll with the photos.

Starting with St. Louis.  Once upon a time this sign was unobstructed.  Neon glowing on both sides by day:

There used to be a lot of Congress Inn signs nationwide — now very few and most of them messed with quite a bit (plastic box replacements).  Here’s what the original sign looked like:
http://www.flickr.com/photos/illtakeyourphoto/3564073792/

Other than the nicer one in Nashville:
http://www.agilitynut.com/07/3/congress.jpg

and this one in St. Louis, I don’t think there are any relatively intact examples: 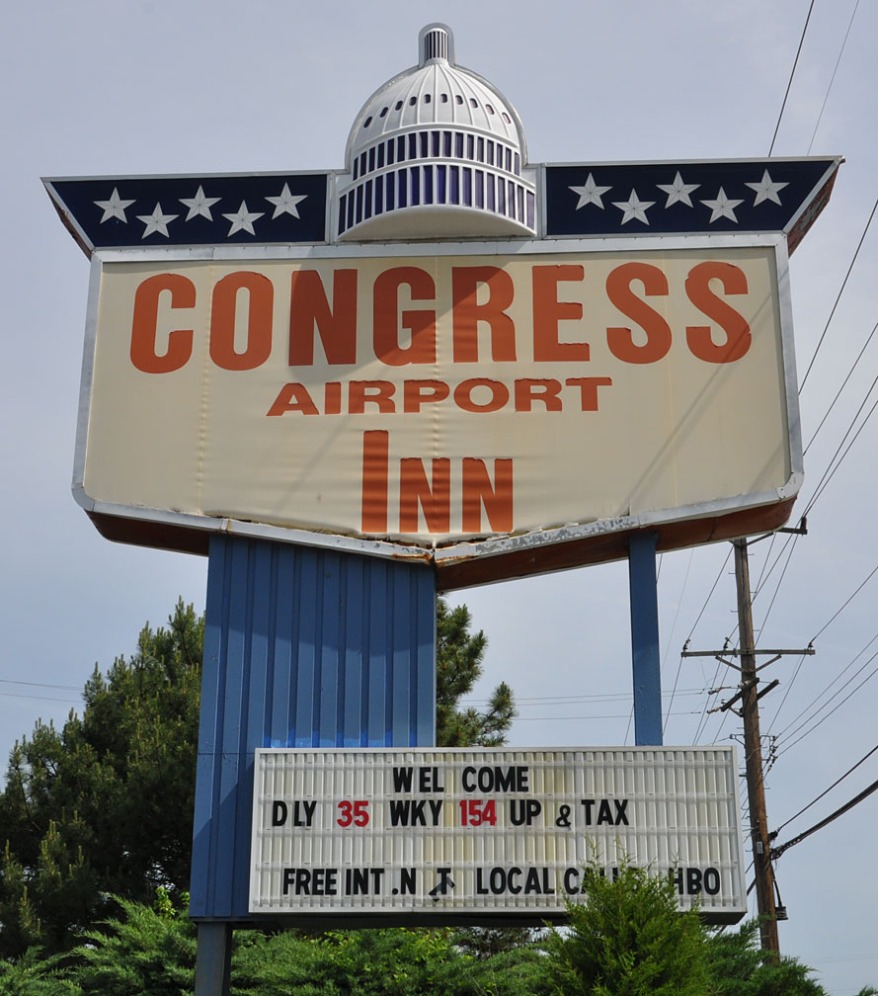 I don’t know what’s sadder:  a closed mini golf or a closed bowling alley.  This is the former AMF Strike ‘N Spare Lanes.  I hope it can be saved but it seems so unlikely.  More about the place and its closing:
http://www.beltstl.com/2011/12/goodbye-to-strike-n-spare-bowling-lanes/

On a more positive note.  Pete’s Drive-in in Wentzville is a former A&W Drive-in.  And, how about that, our new friend (see yesterday’s post) Greg Rhomberg even has a page about the place:
http://www.antiquewhs.com/2007/Inside_STL/petes.htm 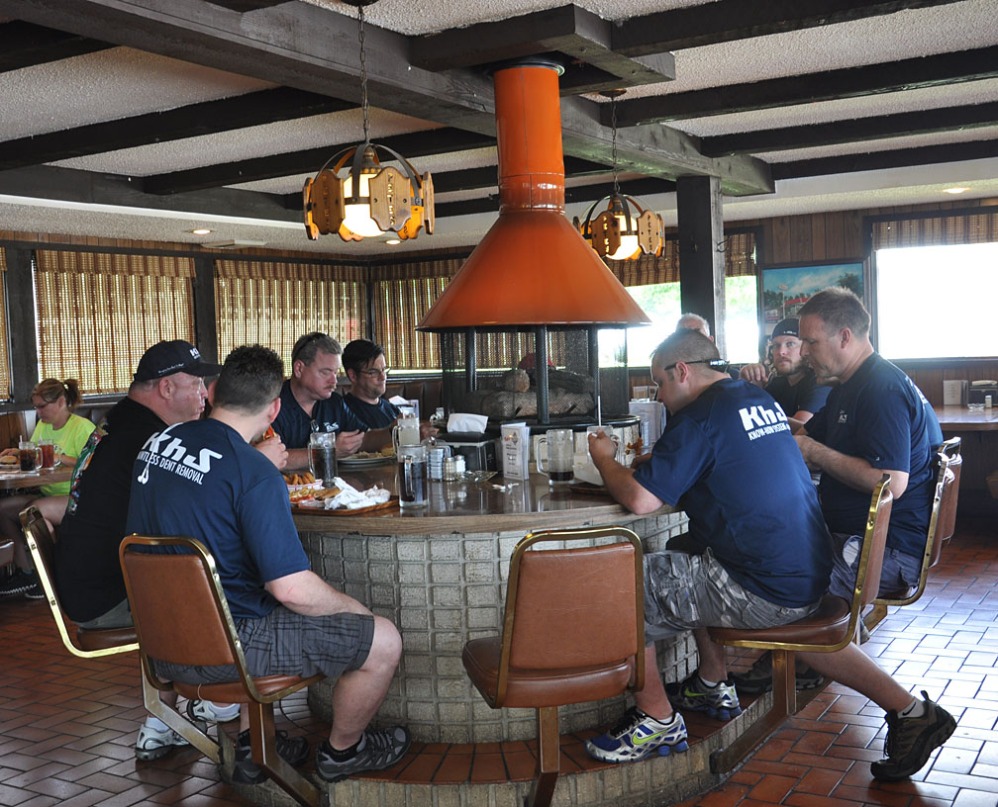 And since it was HOT and I was saving the A/C for the Southwest… I broke down and got a root beer float.  Here’s to you Sparkle — and the American interstate system! 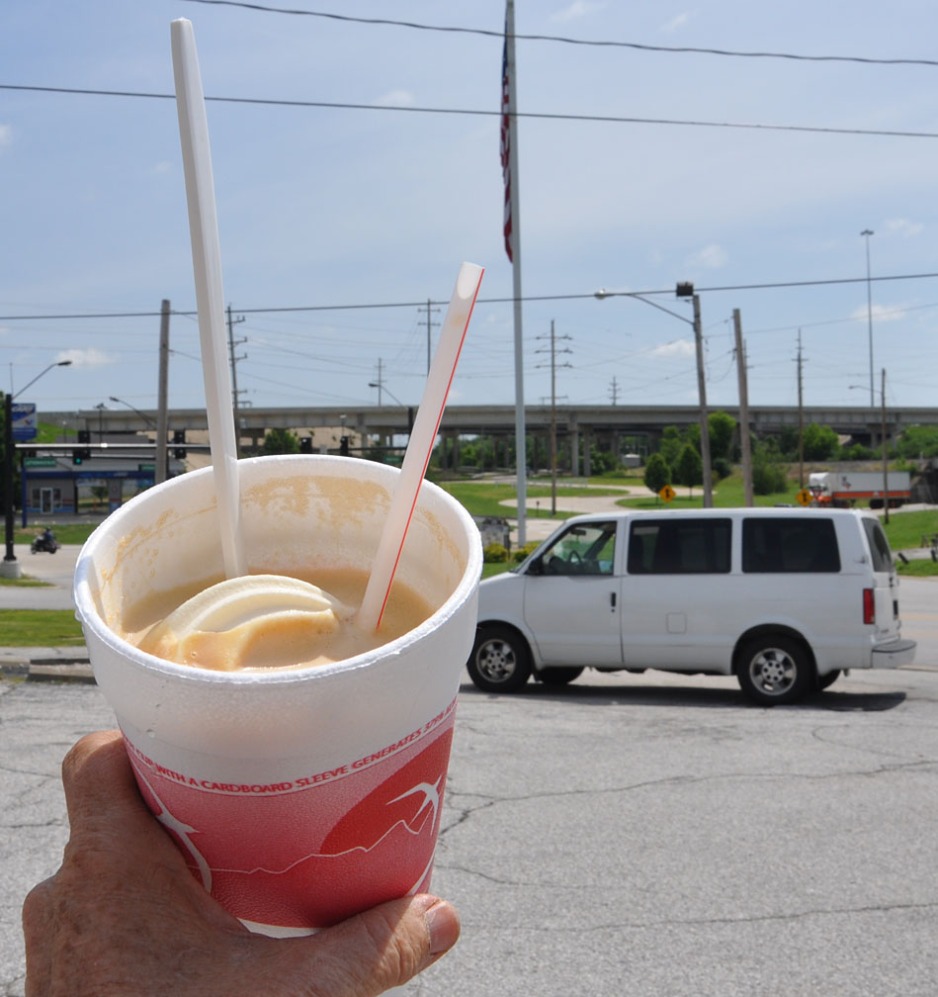 This stop at the Indian Harvest Trading Post was not as pleasant.  I do love faux teepees and have a section over there at the website for them.  I don’t think I’ve shot these guys before.  So I pulled in to the bottom of the driveway and walked up to shoot.  Just as I did, a woman popped out and greeted me with one of those pushy “can I help you”s.  I said that I just liked teepees and stuff.  And she lashed into me with “We don’t appreciate people coming here and taking photos”.  And I innocently said “why not”?  She ranted that they spend thousands of dollars every year fixing the rock driveway every year because of people like me coming and taking photos and not buying anything.  I said that I was at the bottom of the driveway and barely on her rocks.  She kept ranting at me and I just calmly and quietly left.  So folks, you might not want to stop here — or make it super quick.  Or go into her little gift shop and pretend that you’re actually shopping. 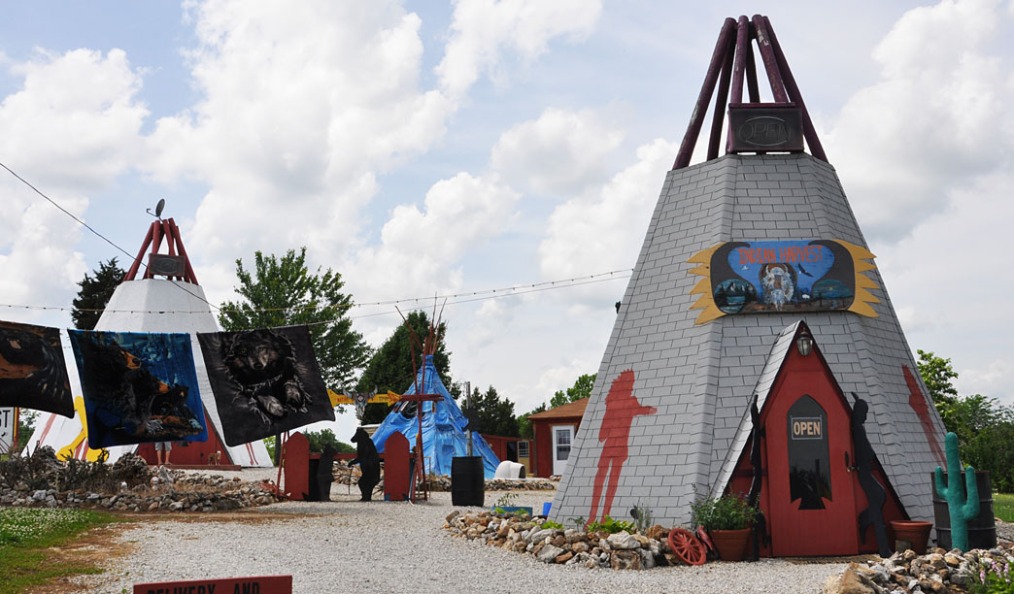 I just googled the place and it seems she’s been screaming an lecturing and scaring people off for years!  Now I’m highly amused and feel that I’ve experienced a unique part of Route 66!
http://legends.websitetoolbox.com/post?id=2777241

Back to cheerier — far less strange things.  From Lebanon.  I don’t know if this sign ever had neon.  It’s huge — and hugely fun.  That’s Sparkle’s ass — for scale: 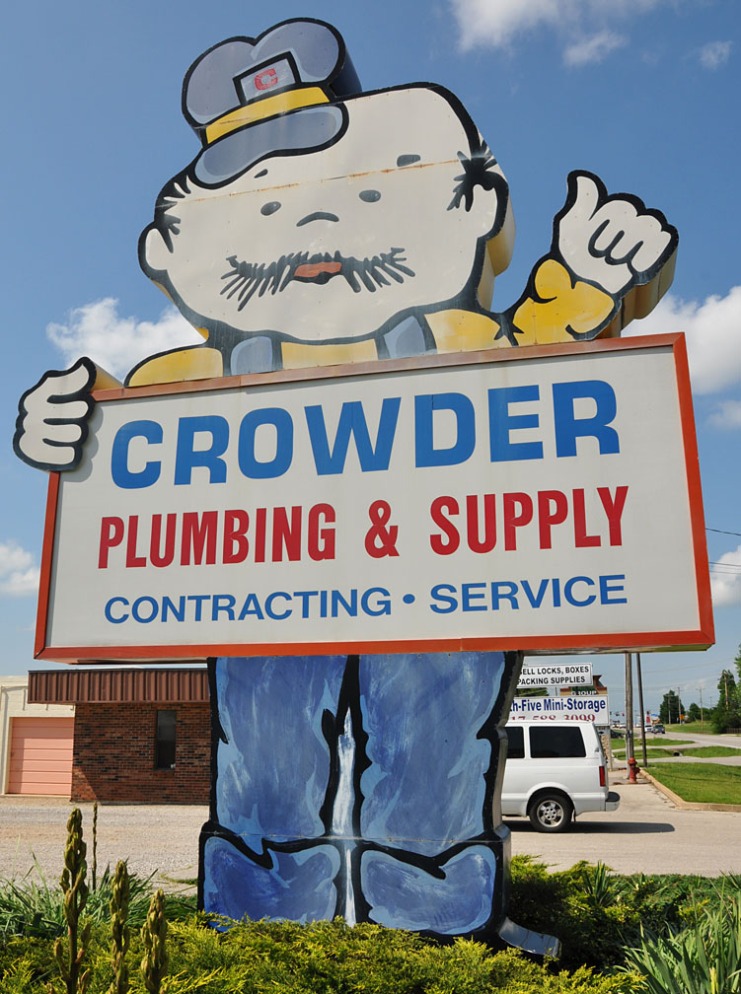 Here’s a new and fun little Route 66 welcome center west of Conway.  In case you’re not familiar with the Munger Moss sign, I posted it at Flickr tonight.  These welcome signs (both east and westbound on I-44) were obviously modeled after the motel sign.  I assume they’re lit at night:

Both east and westbound centers have cute little false-front picnic shelters modeled after buildings.  My fave is on the westbound side — a Phillips 66 gas station: 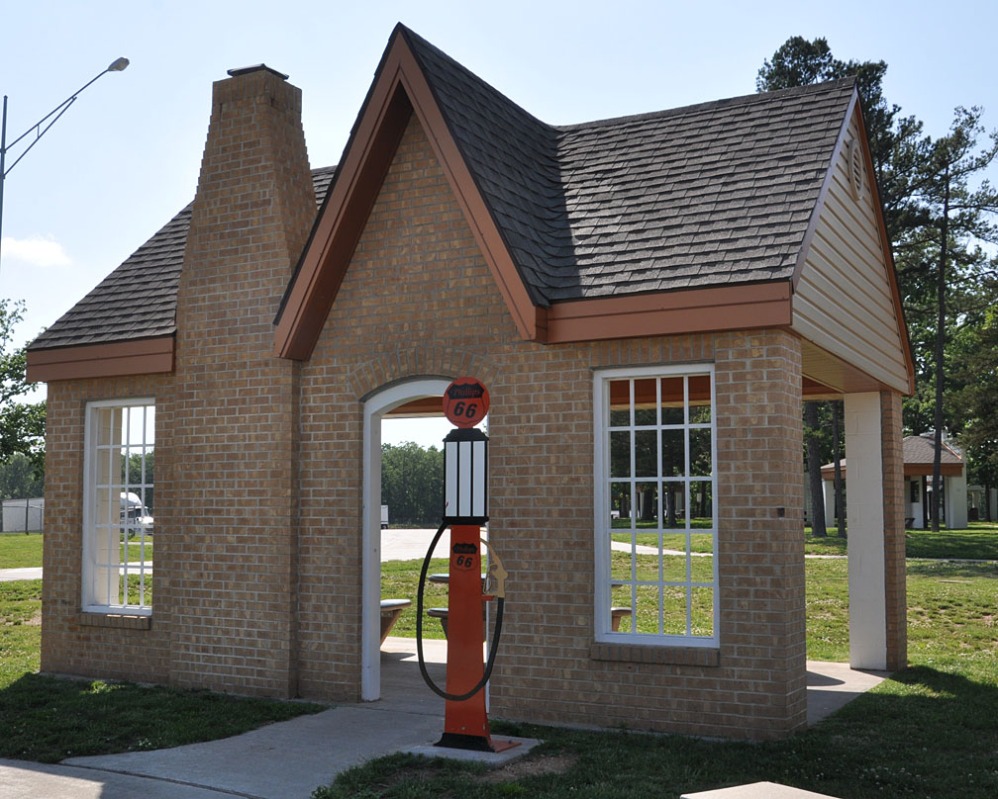 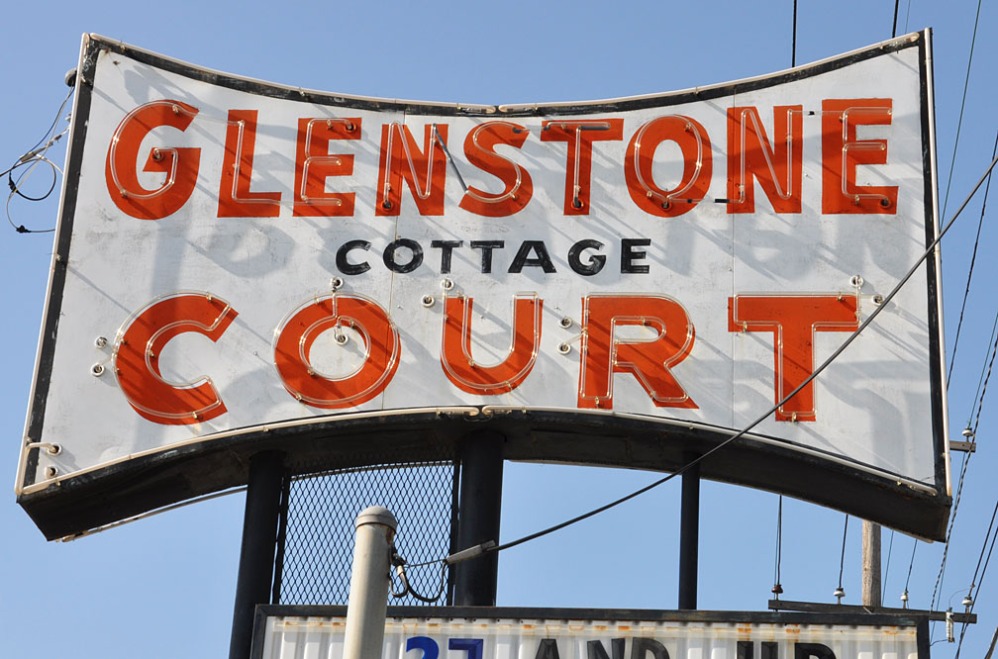 The Best Western in Springfield kept their original sign with the bulb crown and have it on display:
http://www.flickr.com/photos/mrskpax/5002946470/

There’s also this oddball little sign tucked away there which looks old to me: 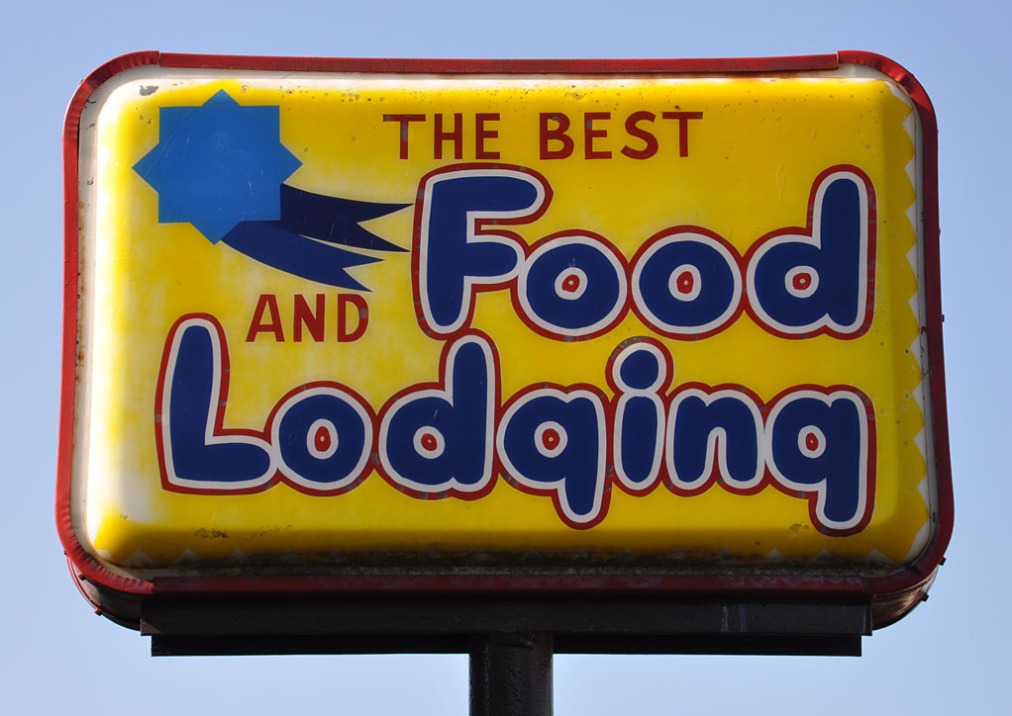 When I was in Springfield a couple years ago, the coffee cup still looked pretty much like an ice cream:
http://www.flickr.com/photos/roadsidenut/4909698465/
This new paintjob helps.  Kinda.  Anyone know what ice cream stand was here originally? 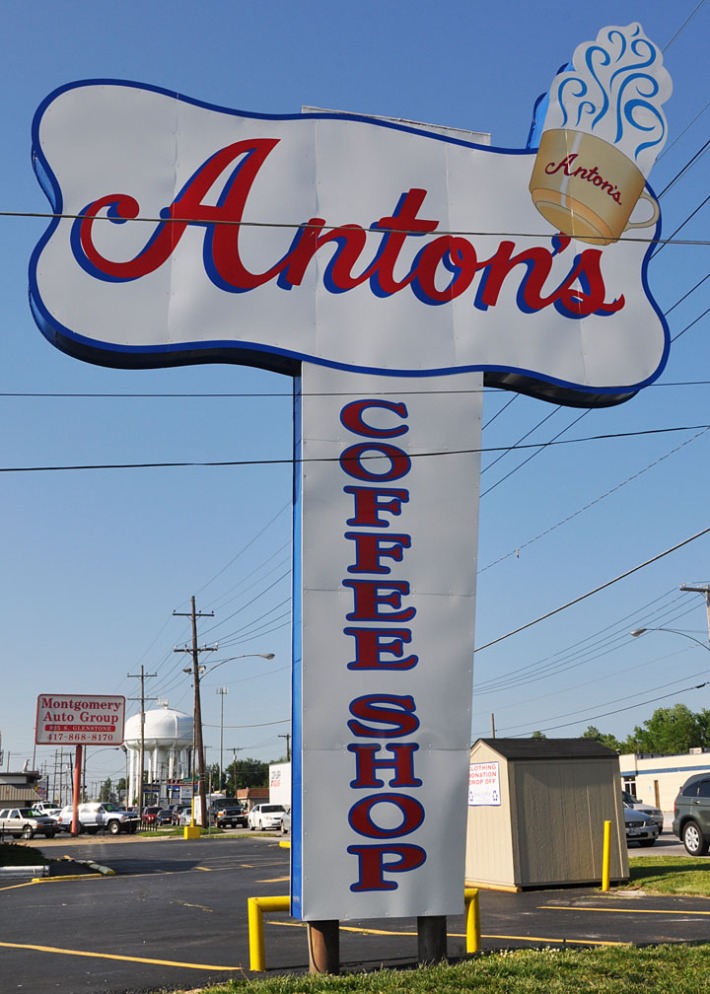 Last photo for the night — also Springfield.  I assume this was an adapted sign, god bless ’em for keeping the wild arrow: 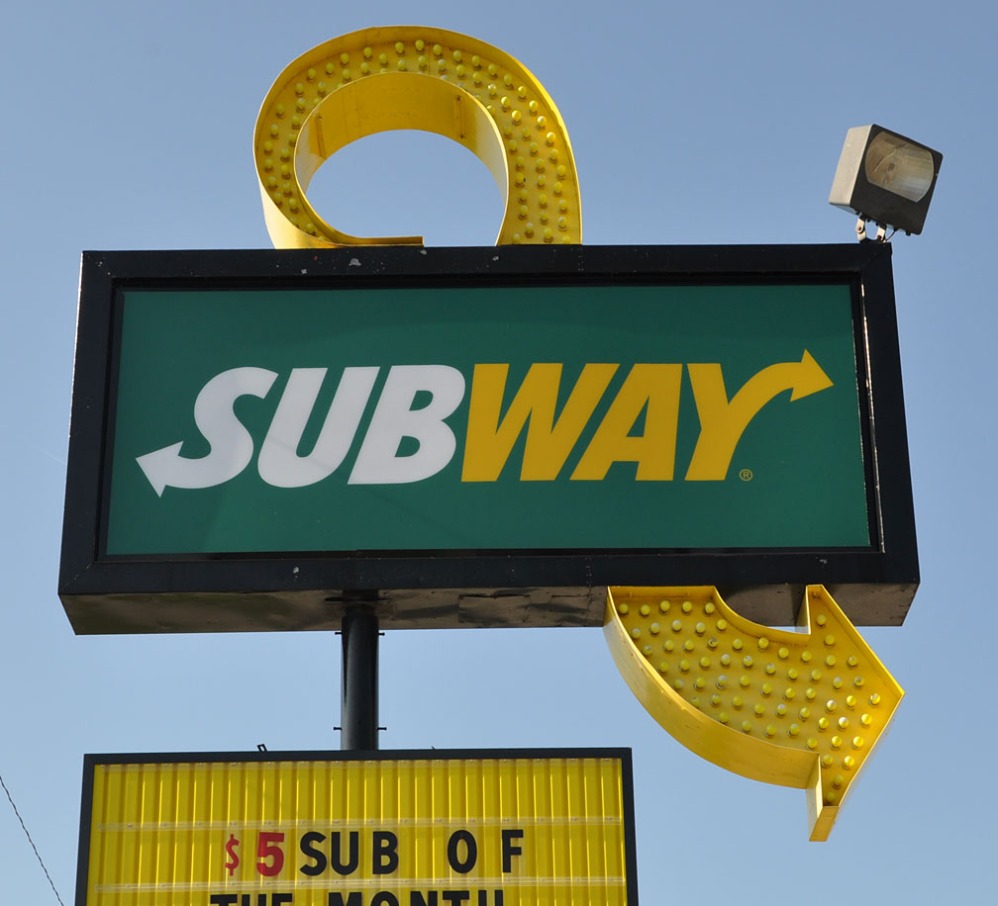 Many interruptions — 2am here.   Tomorrow — a short list for this corner of Arkansas and then on to Oklahoma.  I’m about two days behind schedule.  Not good.  But the plan is — if I don’t finish Arizona stuff, I can attach that chunk onto the Colorado trip this summer.

Oh, in case some of you just joined us, I post simultaneously every night to Flickr — different photos — so you might want to bounce over there:
http://www.flickr.com/photos/agilitynut/

3 thoughts on “Day 8: Whoosh Through Missouri”