No glitches with camera, van or dogs today.  Even the clouds went somewhere else to play today.  The heat is back — lots of river time for the dogs.  Being careful because these rivers are all fast-moving.  Maybe from the rain the other day.  But Grem could be swept away like a leaf if I’m not paying attention and keeping things close to shore.  Nik is powerful enough and experienced enough that he would just drift with the current and paddle towards shore if necessary.  And Fixie — no way she’s putting a toe in moving water.  Grip, the blind gal, stays on leash right next to me whenever there’s water present.

It was all little towns today — most of them only for one or two photos.  But all worthwhile to me.  I think nothing of driving three or four hours for one building or sign.  So, twice as many photos for the blog today as Flickr.  Let’s get to it.

From Jamestown, ND (the giant buffalo quite impressive, the fake Conestoga wagon blocked a lot by tractor trailers).  This sign goes to show it doesn’t take much extra work or money to make a clever and memorable sign: 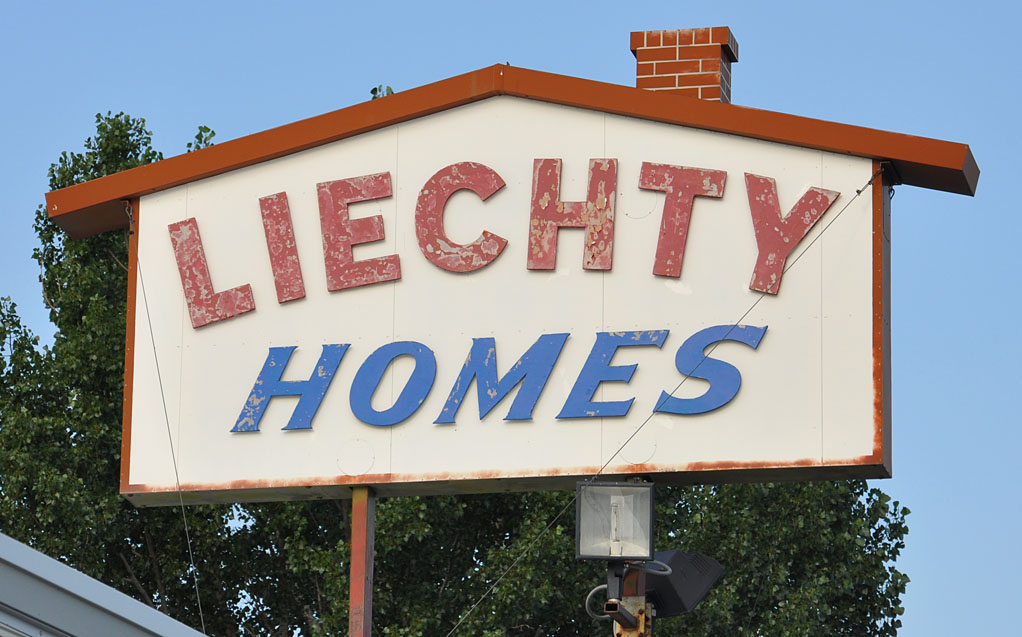 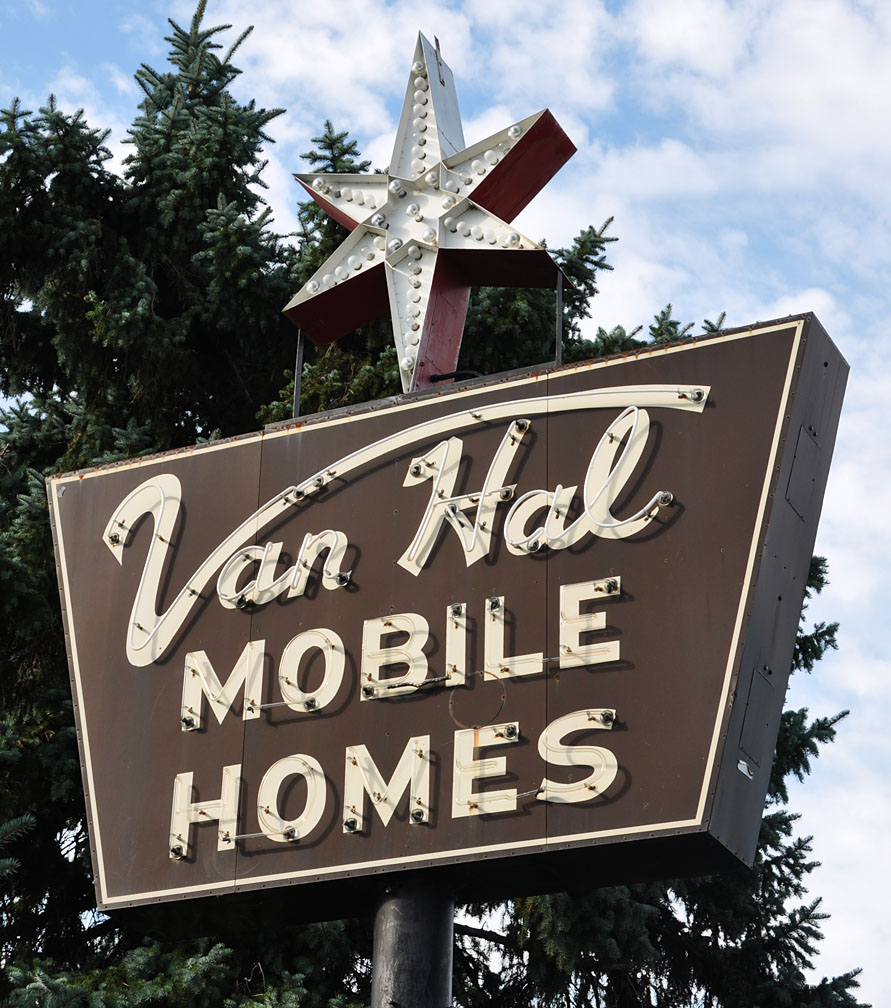 Regular followers of my blog know I’m nuts about opal glass signs.  This one’s pretty rusted-up.  I couldn’t tell if the “Shoe” and “Repairing” were made of some other translucenty material — but probably.  The shoe store still in business: 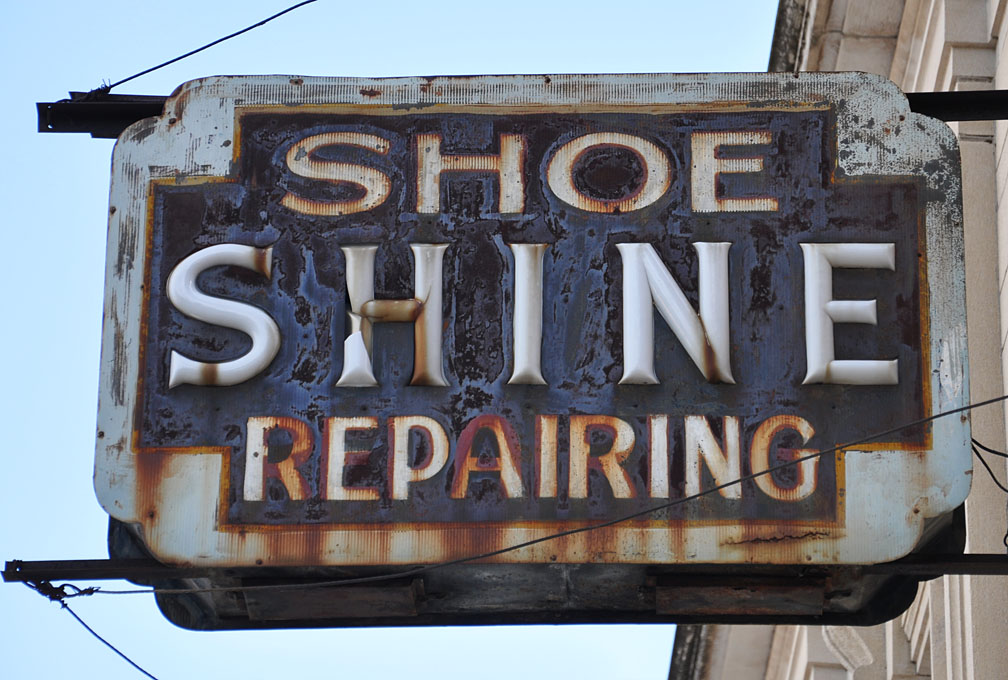 Lots to look at here: 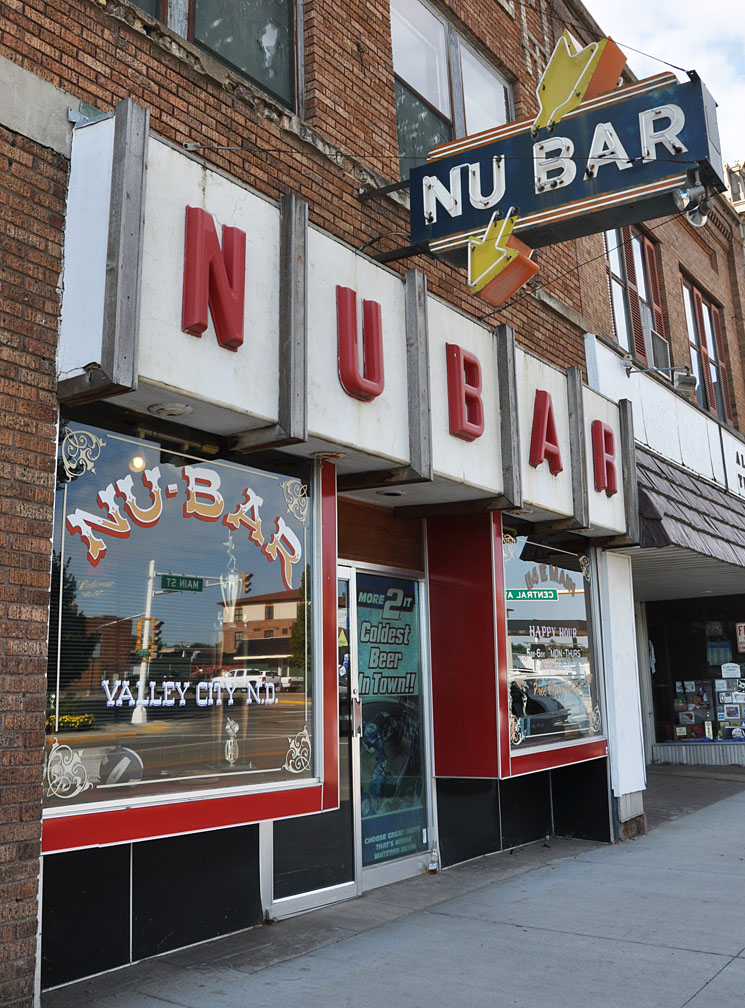 The Art Deco fan details on this one have been repainted.  “Auto Supply” probably had neon originally — or the entire sign might have been a re-work: 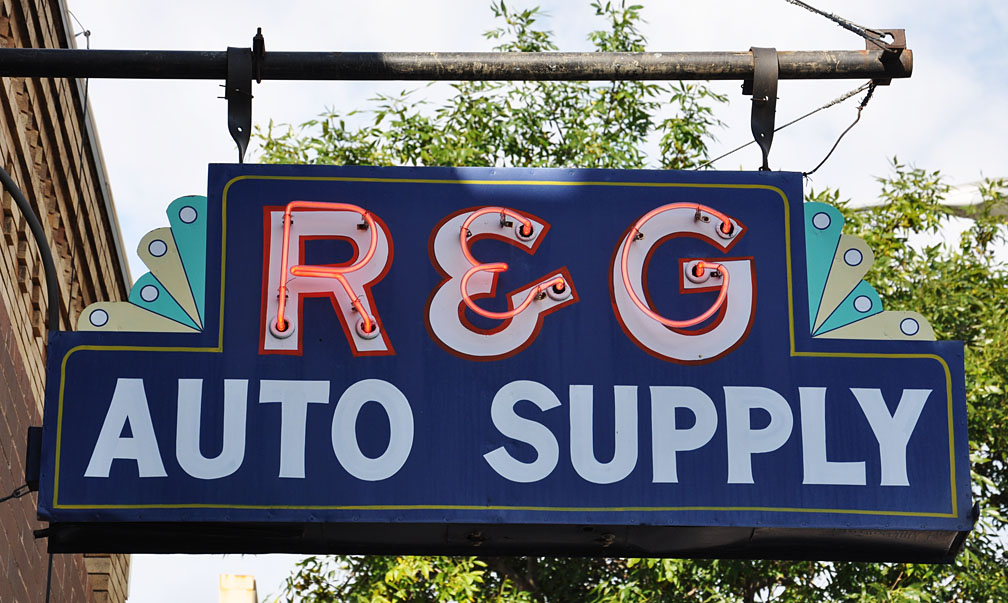 Moving on to Wahpeton, ND: 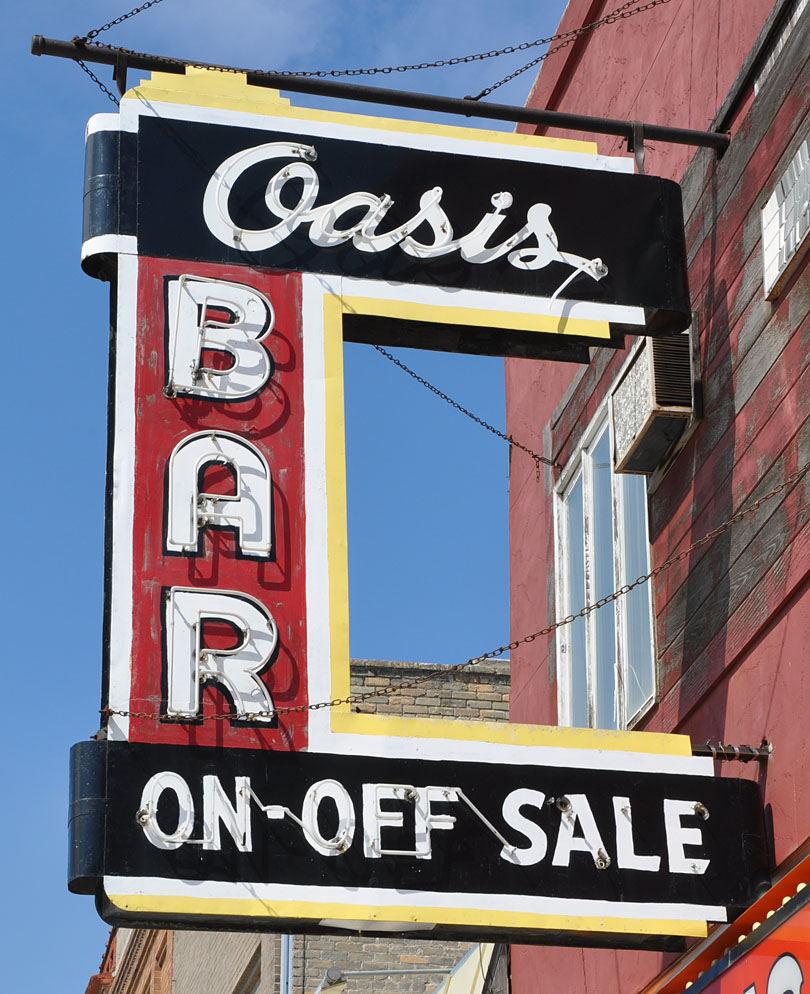 Make that three Art Deco era signs in a row here.  The sunny side of this one was even more paint-blasted — so I went with the shady side:

Still Wahpeton.  This one has bubble type plastic that I’ve never seen before: 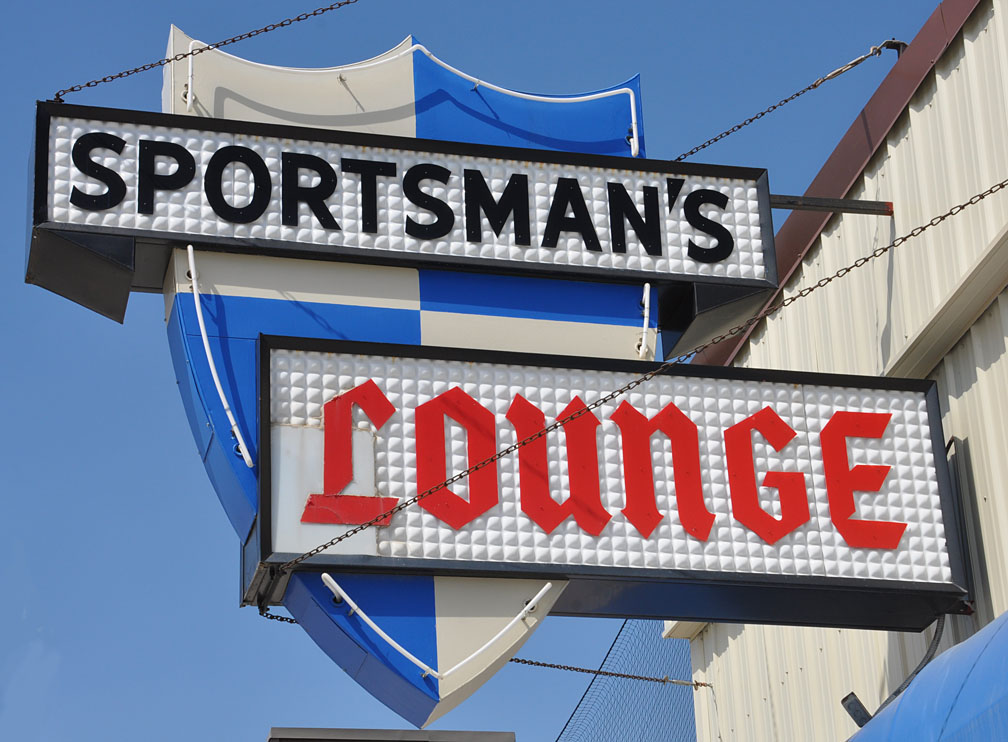 A couple next-door neighbors.  The Good Luck must have been another restaurant originally. 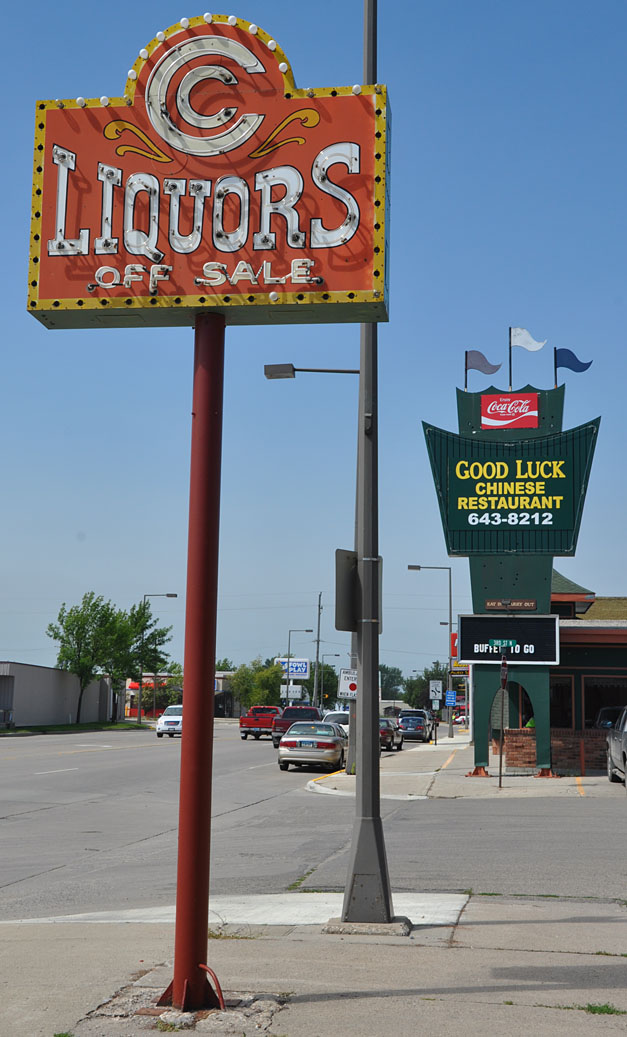 This sign is on top of the liquor store’s canopy (the building is a former gas station).  Neat tail on the arrow: 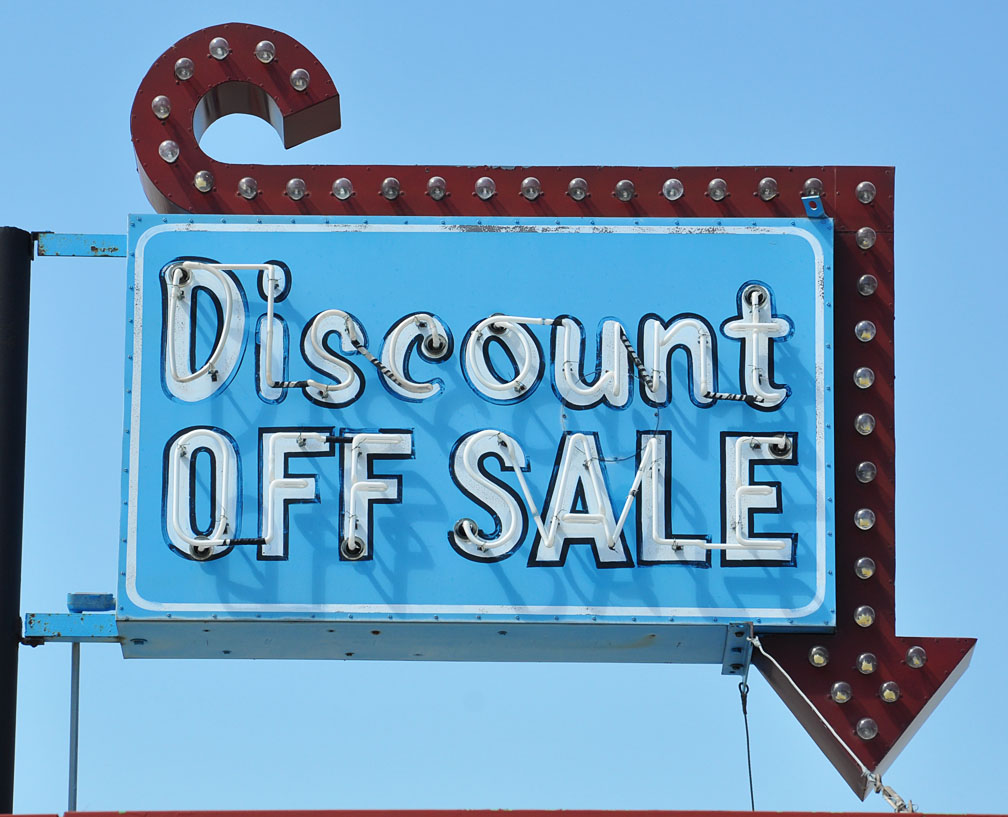 Back in Minnesota — in Pelican Rapids.  An old creamery building had this nice pelican detail: 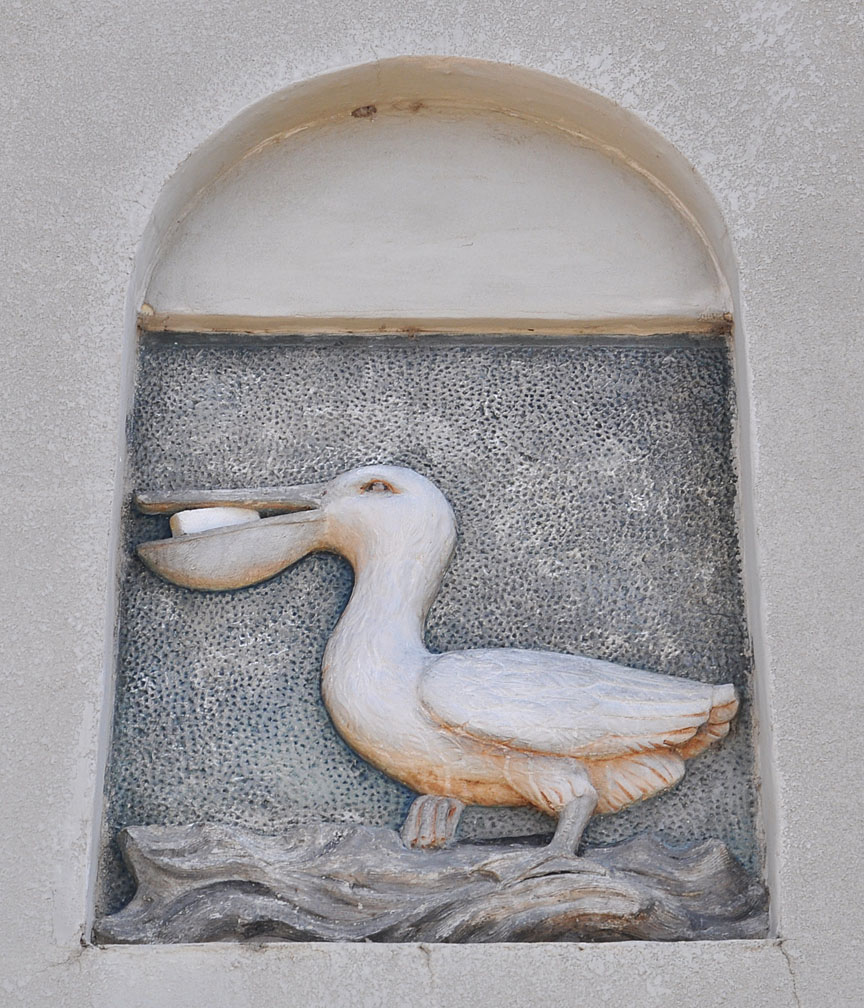 Over to Fergus Falls — one of my favorite vitrolite storefronts.  The letters are incised: 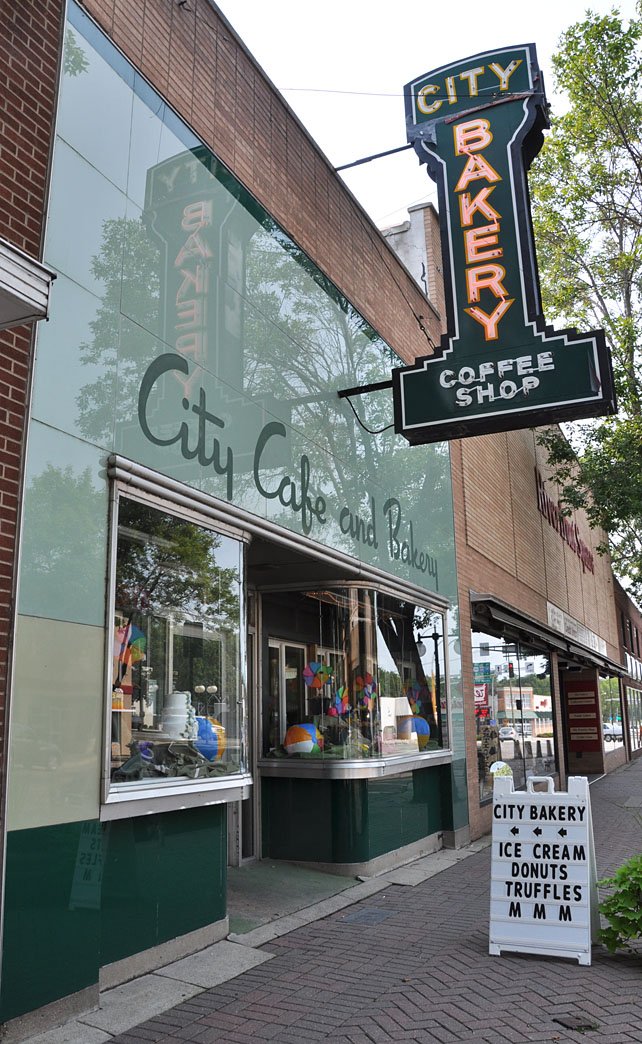 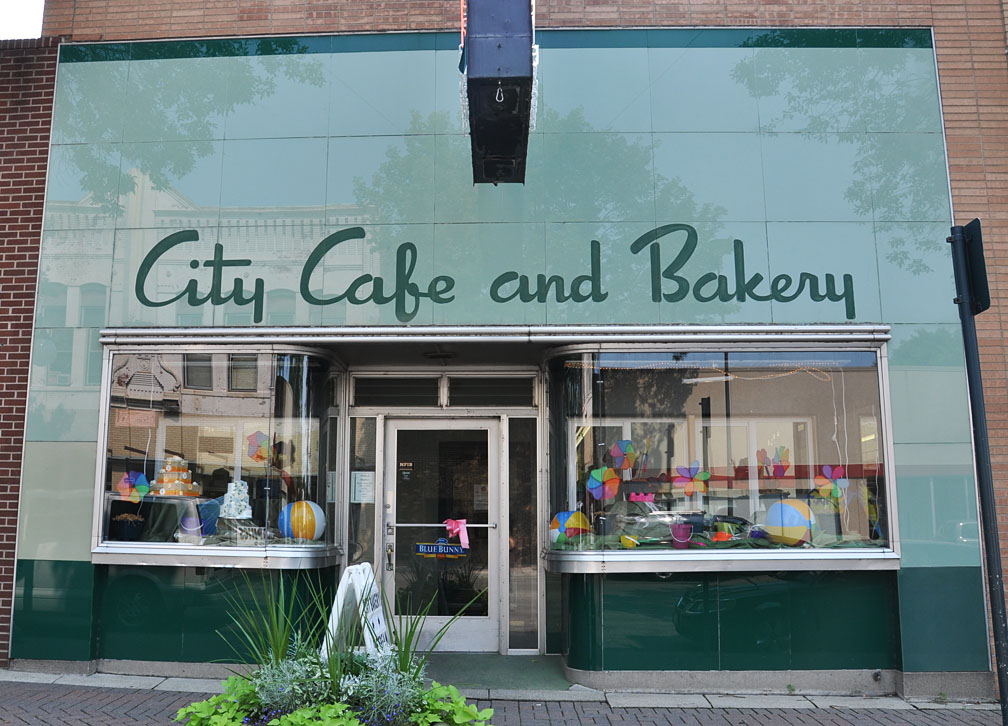 And, yes, I did.  This is a treehugger scone (dinner, very filling) and a peach crispie (like pie but smaller and easier to eat): 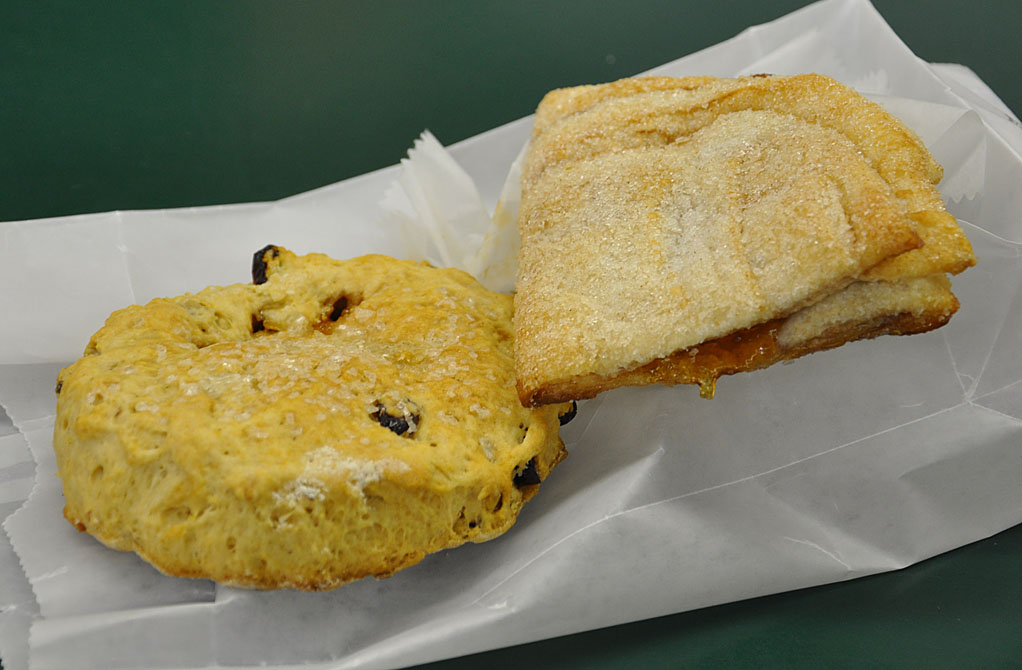 Also Fergus Falls.  The letters on this sign are made of glass.  Not a style I’ve seen before with the heavy outlining and pretty much flush with the sign panel:

Some stained glass above the Lundeen’s storefront:

Over in Vining — there’s a sculpture park with about a dozen of these sculptures by Ken Nyberg.  I’ll include just a couple of photos and this link for more:
http://thebigstuffproject.blogspot.com/2008/07/vining-sculpture-park.html 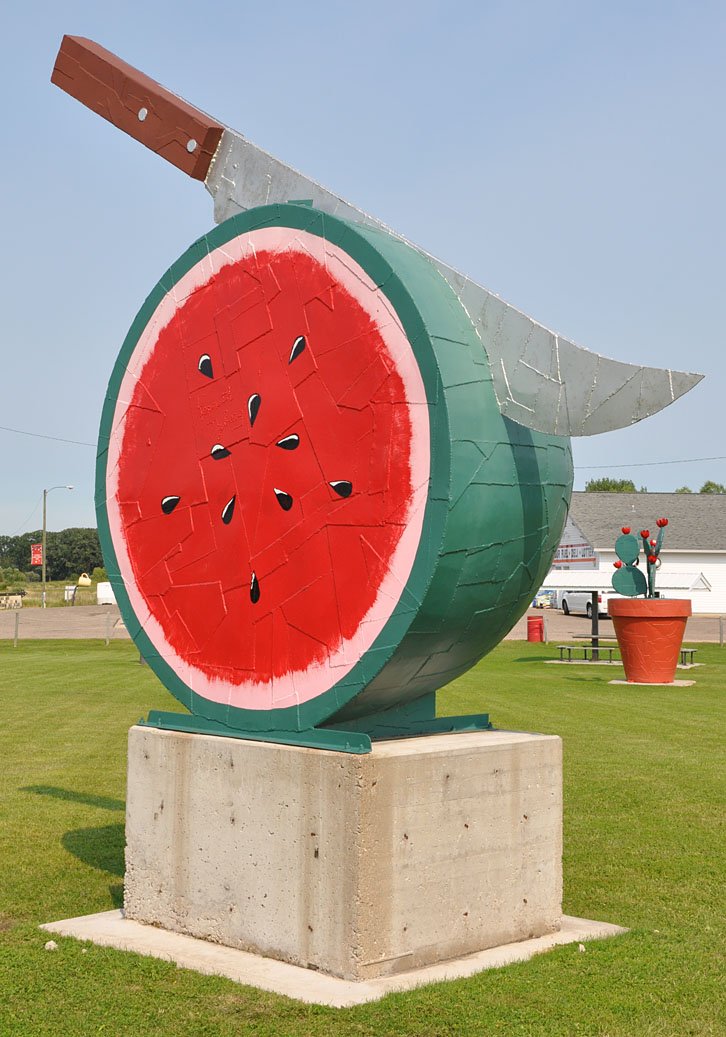 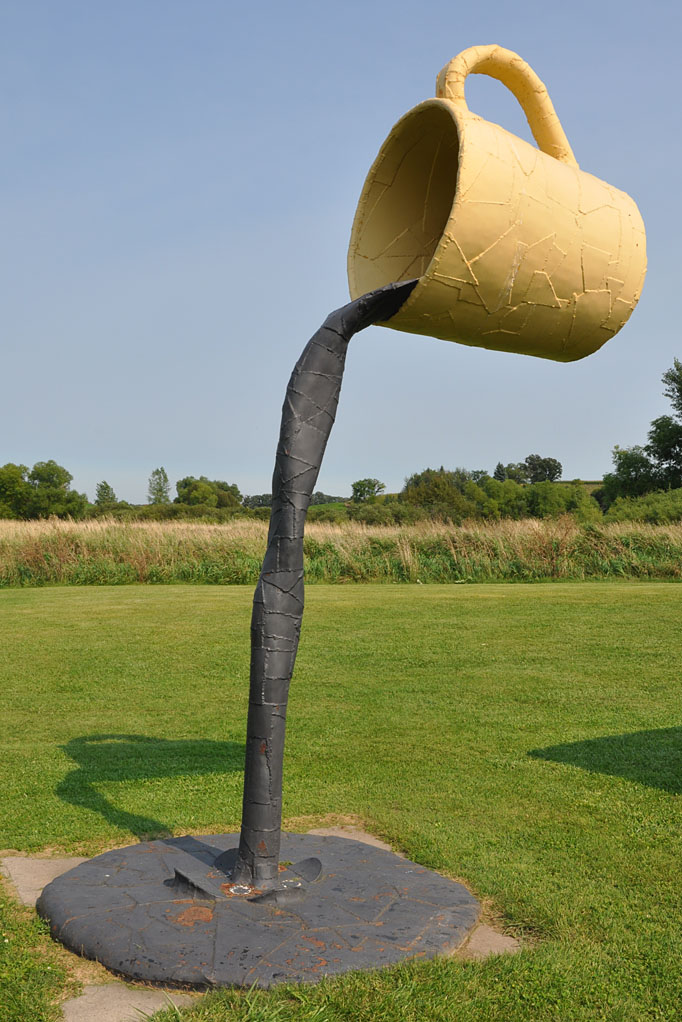 A couple of beer signs at Madsen’s Resort in Battle Lake.  I’ve seen a bunch of these plastic Grain Belt signs — but the paint is always super faded.  This one is mint: 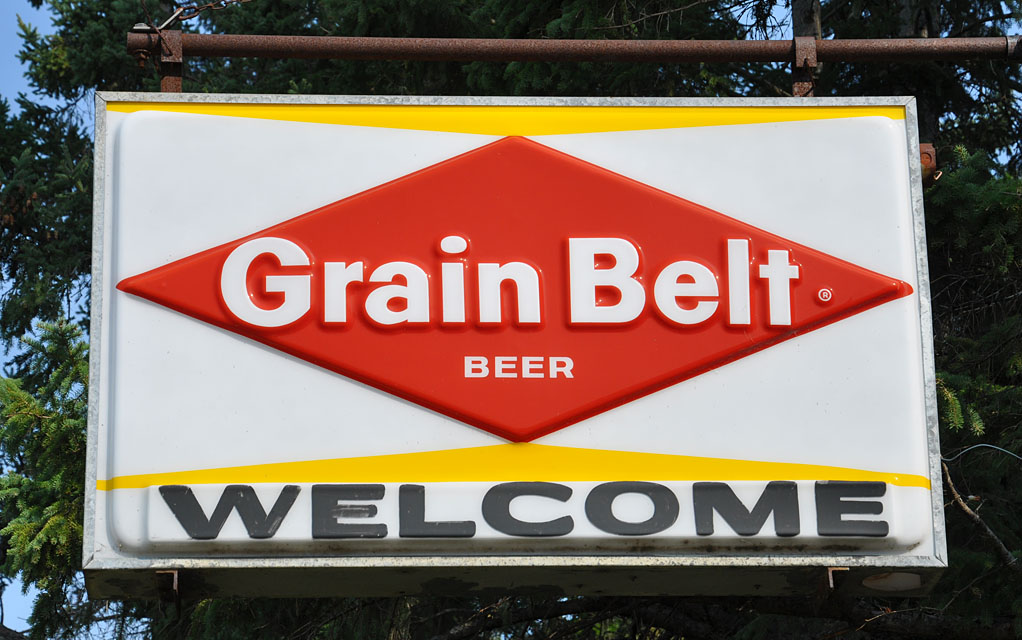 The Hamm’s sign was really hard to shoot under a tree — but it’s faded but nice with the top of the beer glass in high relief.  This faded example in NV shows better what I mean:
http://www.flickr.com/photos/polyman/24809028/ 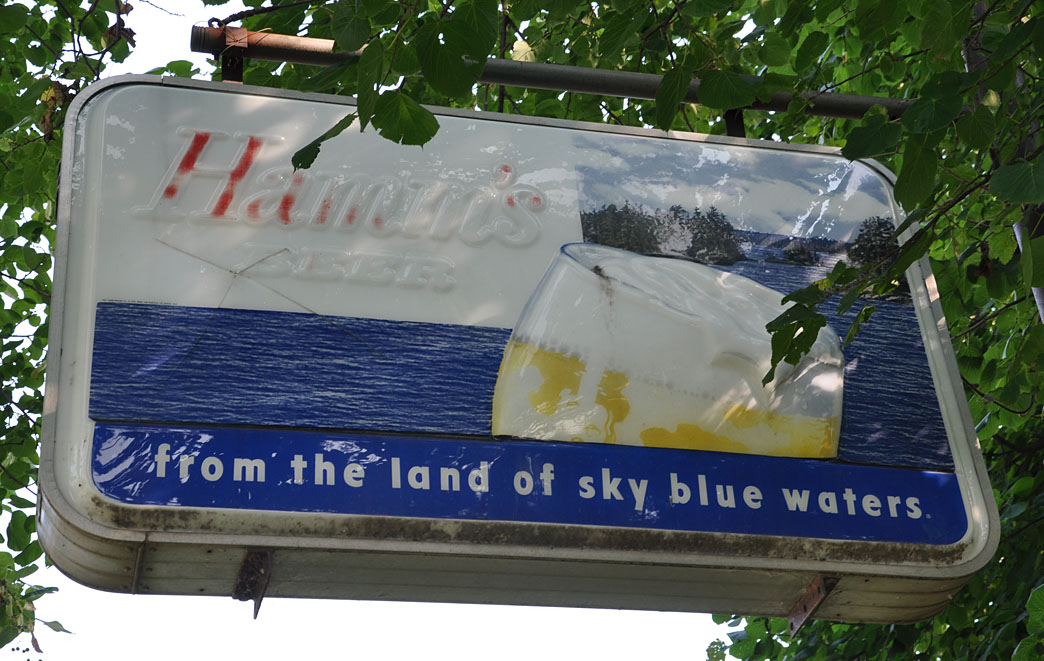 From Clarissa — simple and effective: 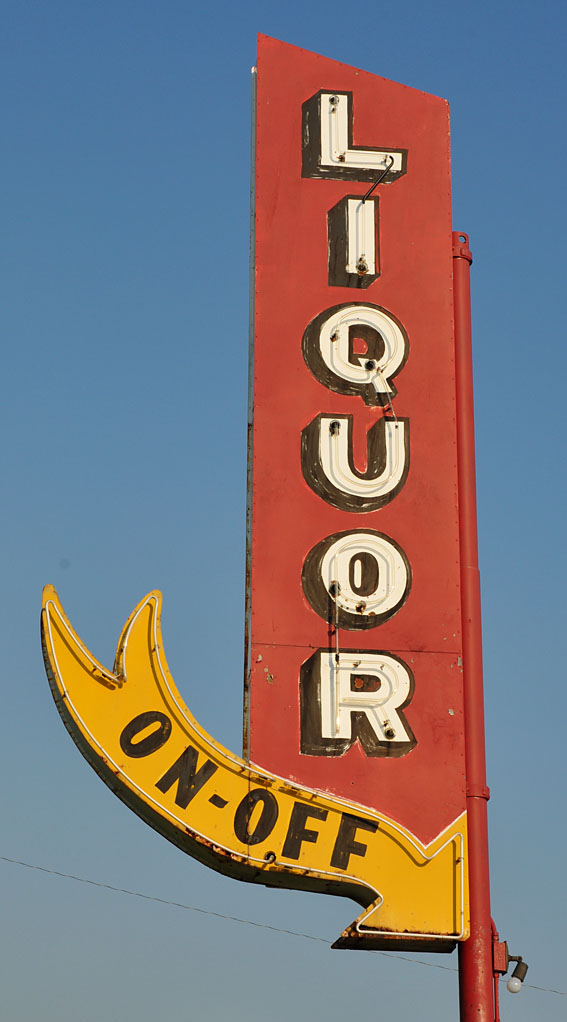 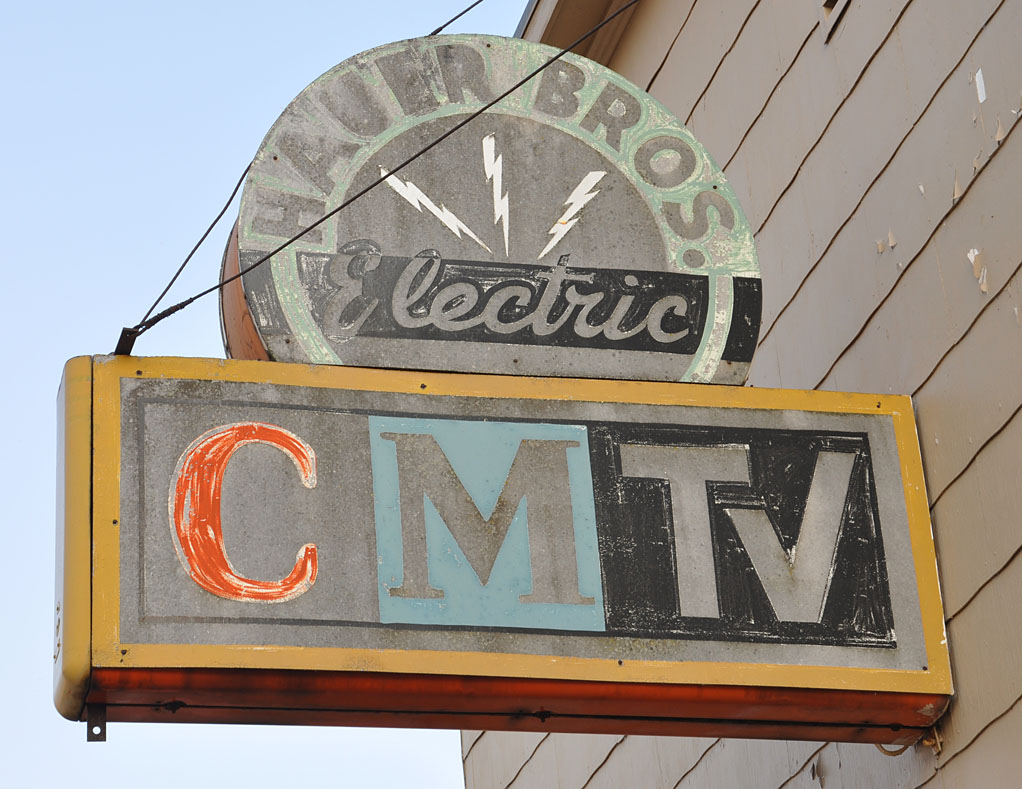 Tomorrow, I’ll be in Paul Bunyan territory — so brace yourselves for lots of photos of him.  I’ve debated about whether to start skimming and get closer to home (Wisconsin) by Friday.  But I think I’ll just plod along following my list and see where I end up here in MN.  Three more days to shoot.