Just the most ridiculous day to be trying to take photos.  Pouring rain, thunderstorms, all day.  Rain sort of stopped around 5pm but still very dark.  So, I did what I could.  At one point in Stroud, it was just so torrential, I pulled over for a two-hour nap.  Not like me, but it was that futile.  Luckily, most of my shooting was a) in remote areas and b) buildings rather than signs.  Signs really need light to make them pretty whereas buildings are more straight documentation.  Although blue & clouds always help!

The dogs were a bit nuttier today from not enough exercise.  I did what I could but I just didn’t feel like standing in the rain while the sniffed around.  I was getting wet enough from trying to take photos.  It really takes time all that wiping of the camera and maneuvering the van into just the right spot so I could shoot from inside when it was pouring.  But I wasn’t pushing for any world’s records today.  Just pouting and plodding through my list on auto-pilot.

A bit of Route 66 stuff today as well as small cities north of OKC.  This place in Arcadia, POPS, was built just after I was here last.  Quite a fun little place.  Warning turn your volume off for their website:
http://route66.com/

An ultra modern gas station (the prices were the highest I’ve seen).  Even the bathrooms were pretty fancy.   There’s a cafe, the usual gas station type convenience items with a HUGE inventory of sodas from all over the country. I stocked up on a six-pack of assorted sodas I’ve never seen before.  Maybe I’ll get a photo tomorrow of them if the weather’s better.  I’ll probably hang onto them until I get home.  POPS giant bottle has gotten a lot of press.  The bottle is lit (LED tubing) and animated at night:
http://www.youtube.com/watch?v=Ck_XTIX0I2c

And the building itself — with bottles visible in the windows.  It really is quite shocking to have something this modern in the middle of farmland: 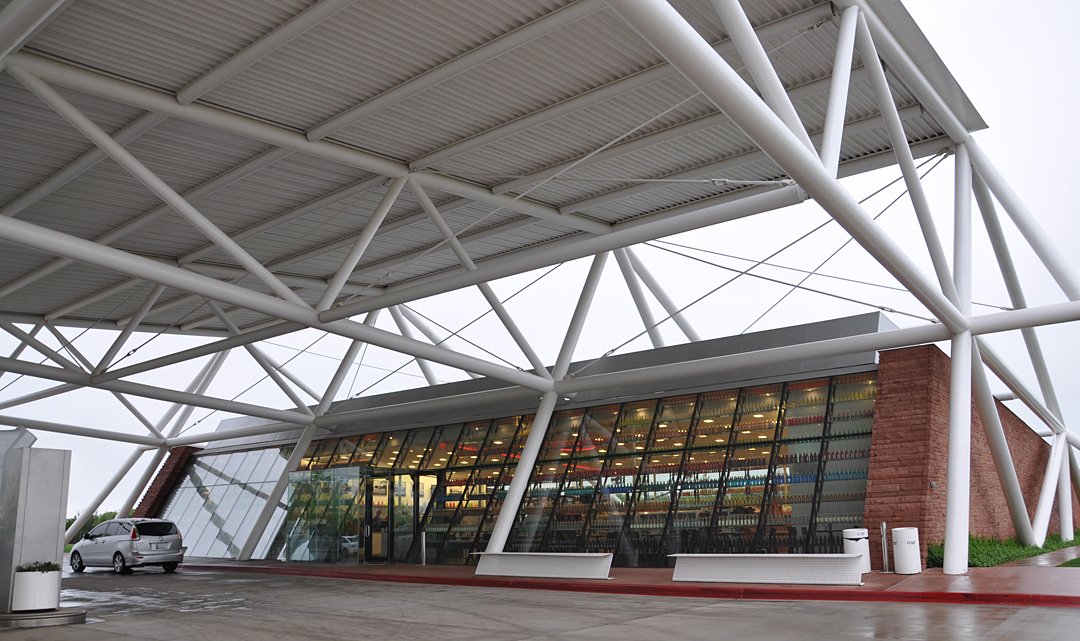 As I was gas-ing up, I noticed this van parked nearby.  The name of “Sit Means Sit” immediately sounded like bad news to me.  I doubted that this was positive, reinforcement-based training: 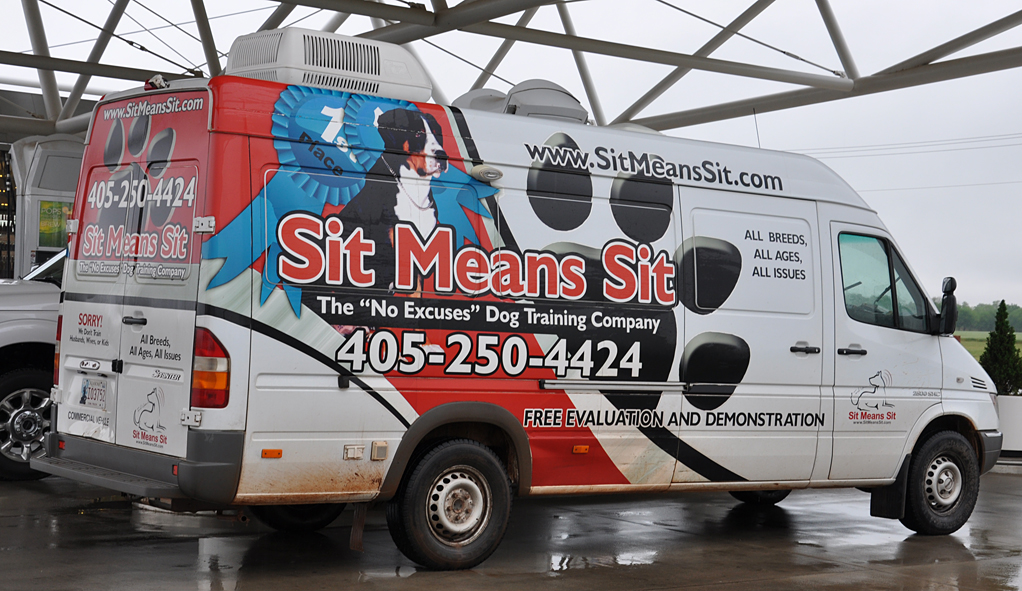 I took a peek at their website — and sure enough the first thing I noticed at their website was this $210 dog collar.  Hoo boy.  What that means folks — and I don’t think it’s clear from the video that I watched about 3/4 of the way through before I got an error — is that the dogs are getting shocked.  You would sit, too, if you were getting shocked for not sitting.  What I think is happening in the video is the dog is being “taught” forced to pay attention to the owner OR ELSE he/she will get shocked.  By the “teacher” with a remote control to the collar.  Jesus!  Don’t get me started.  Not the topic for this blog, I know.  But really, there are no quick fixes for changing behaviors — dogs or humans.  Would you put one of these collars on your kids?  If you ever have a “problem” you want to deal with, please take your dog to someplace that uses clickers and cheese — not torture devices.  For humane, relationship-building approaches to dog training, may I recommend watching “It’s Me or the Dog” (Victoria Stillwell) and NOT “The Dog Whisperer” (Cesar Milan).

Now, where was I.  Oh yeah, buildings, signs & statues.  While in Arcadia, I took a peek at this house that was built to look like a Phillips 66 station:

Speaking of Phillips 66 stations, I stopped to check on the one in Chandler.  This one’s looking a bit shabbier than the last time I saw it.  I see they’ve recently switched the sign pole.  Why?  I like the one lying on the ground much better (foreground second photo).

Had to shoot this one in Cushing:

Another abandoned Fotomat but not as shabby as the one in Oklahoma City.  This one is in Guthrie: 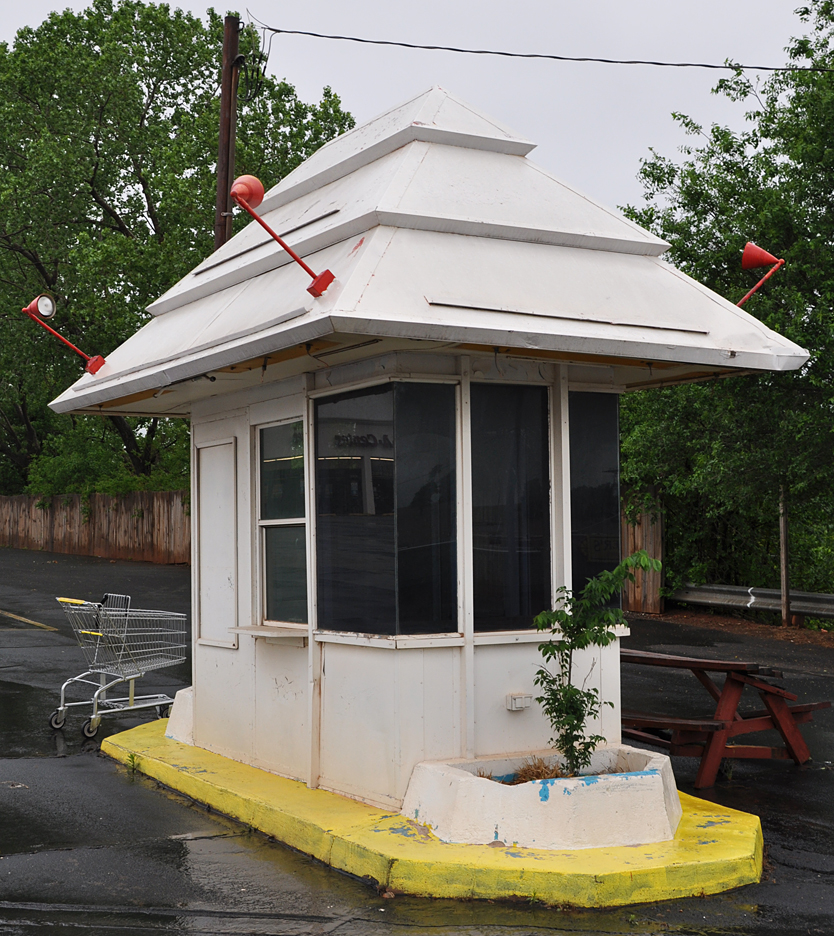 In Stillwater, I was trying to find a building and asking the locals about it in a Walgreens.  I never did find that building but I did run into the Easter Bunny!  Purchasing a chocolate bunny.  Very bizarre.

Plans for tomorrow for more Northern OK stuff.  If the weather continues to suck, I’ll skip Tulsa for a day or two and shoot the stuff east of there.  It looks like better weather later in the week.  Let’s hope!

10 thoughts on “Day 30: Creeping along in Northern OK”