Today was all about wrapping up the tippy top of Texas.  Got a lot done — had to skip some.  A couple stops tomorrow morning and then straight into Oklahoma we go.   Some cloudy parts to the day but mostly sun.  It got pretty hot again — maybe low 90s —  but I think we’re getting used to it.  A wonderful big pond at the edge of the cemetery in Amarillo that we were probably not supposed to be using, but we did.  There were even ducks but Nik ignored them.  I think he’s beginning to realize catching them is futile.

Got started late tonight since I made a big push for Dalhart where we’re staying tonight.  After 1 am already so let’s dive right in.

I’ve seen a lot of homeless dogs on this trip.  When I can, I usually put out a big pile of dog food for them.  It really pisses off my dogs since they see me use one of their dishes and scoop out a portion from the bag and give it to the other dogs!  Very often, the stray dogs sniff the kibble in a “what the hell is that?” kind of way.  I think they’ve lived off human food scraps for so long that dry food, even the super-duper premium kind that I feed, seems gross.

These guys were hanging out in downtown Wellington.  Seemed to be good pals.  As soon as I approached, the little guy started the fearful alarm barking thing.  The big guy let me pet him.  As soon as I got back in the van, the little guy started gobbling up his pile.  The bigger guy didn’t know what to make of it.  After a couple minutes, he started eating his in a lying down position:

Just a few stops earlier in Estelline, I encountered another dog.  Maybe a Cattle Dog mix.  Pretty shy and wanted nothing to do with my food.  But I left a pile which he might come back for later.  I let Nik out since he’d only had a short run that morning and was still very wound up.  The stray dog didn’t know what to make of the ball-throwing — probably had never seen such a thing — and after about five throws, scampered down the street.  Very sad to think that any dog doesn’t know what retrieving or playing is.

Anyhow, back on topic…  This sign from Shamrock — appears to be one of those mass-produced advertising signs with the business name at the bottom.  I’ve never seen one like this before: 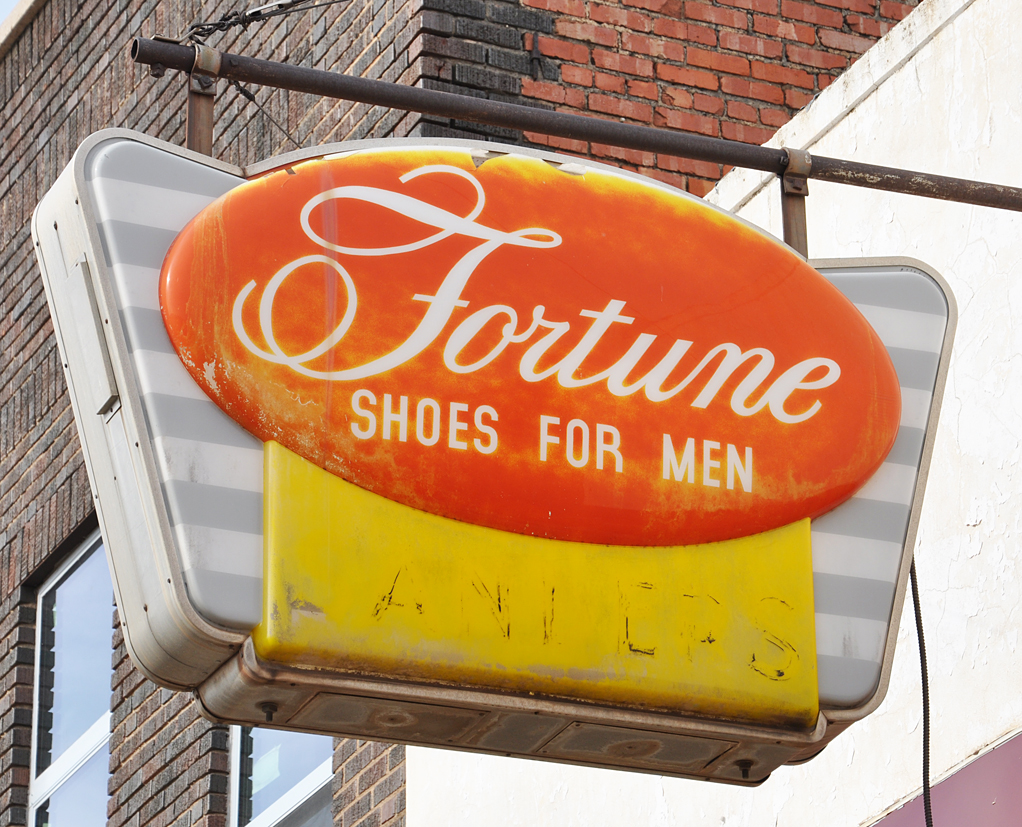 More from Shamrock.  I think this might be new since I don’t remember noticing it the last time I was in town.  The bank has modeled their ATM machine… 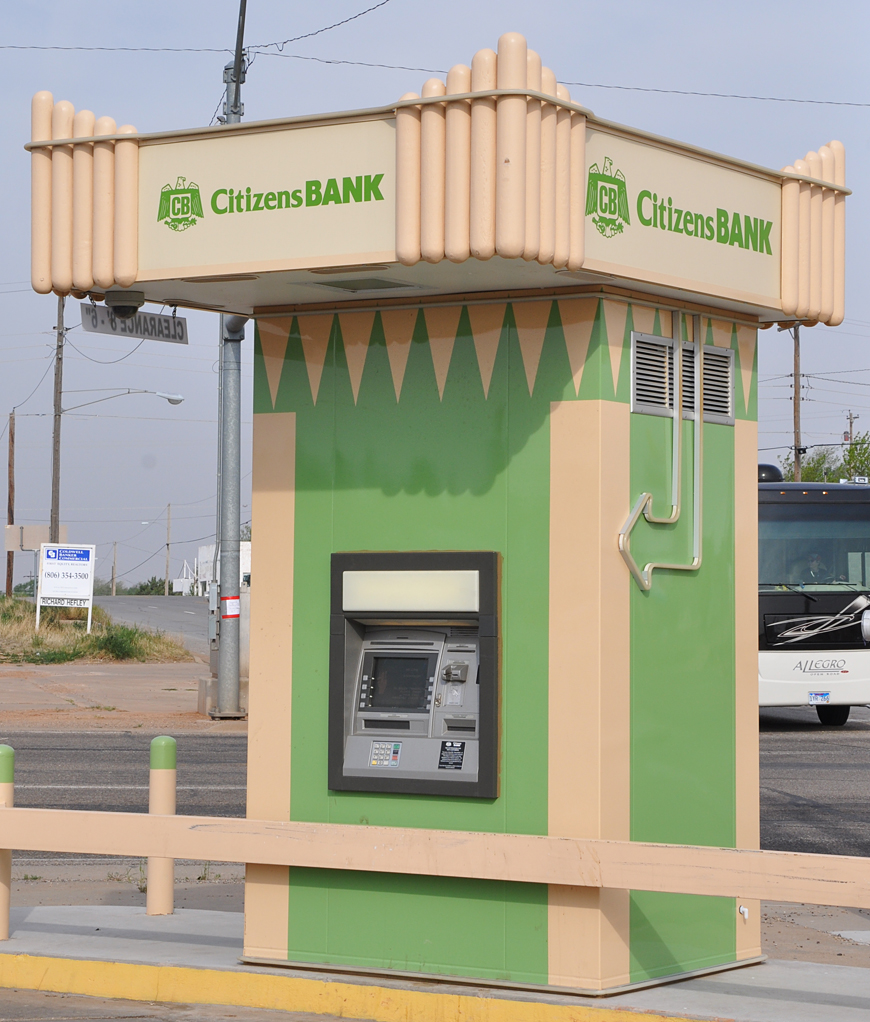 … after the amazing, restored Art Deco Conoco station across the street:

I think I have the names & histories of these buildings in my notes someplace — but I’m too beat to look them up.  Perhaps a Route 66 fanatic will chime in.  I believe both were originally gas stations — or gas station / cafe combos:

On to Amarillo.  The longhorn limos at the Big Texan (steakhouse) — which is THE tourist trap in town.  Although I suppose locals go there, too:

Some signs from Amarillo: 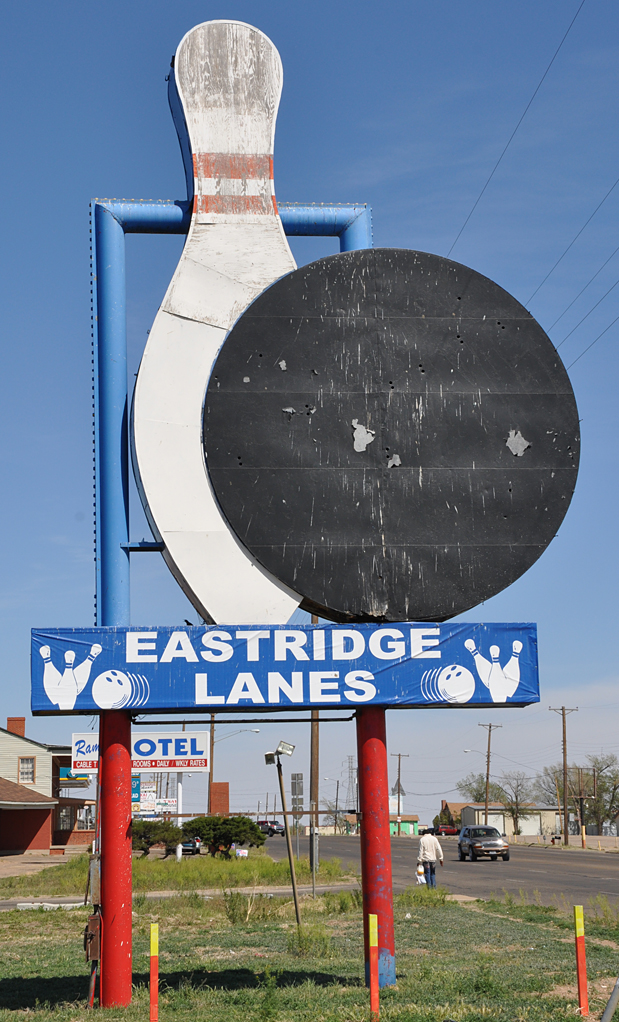 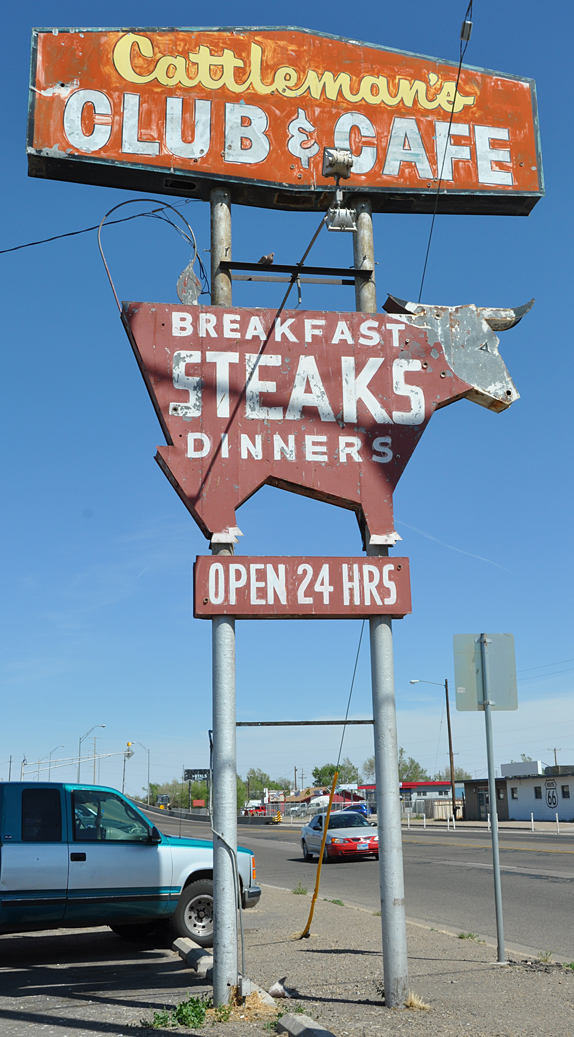 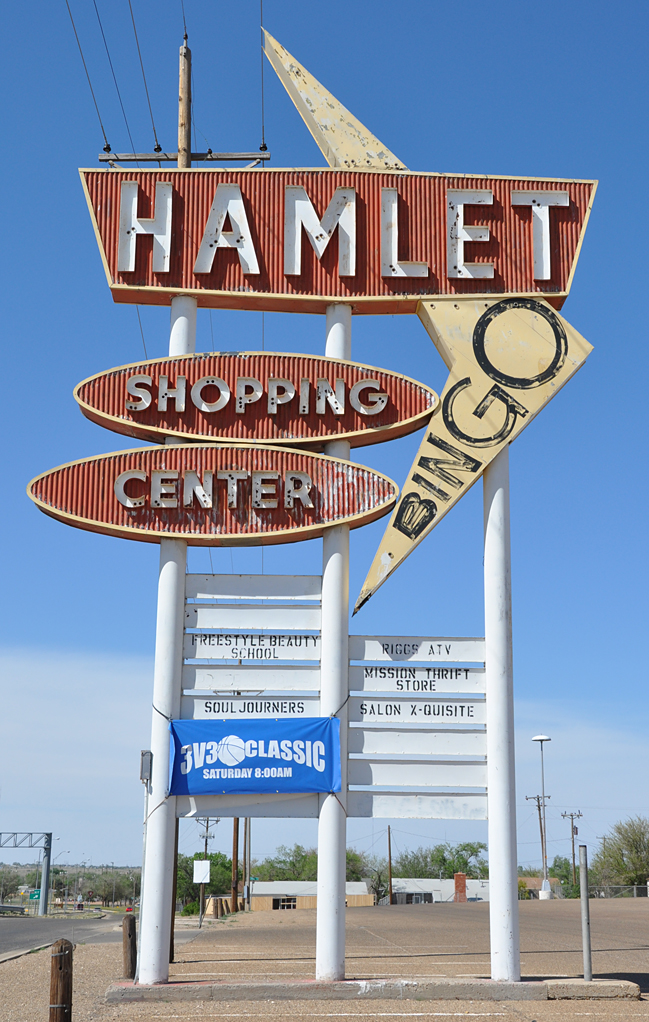 This one features a C-152 Lectra  (the star part).  For more about them, see about three-fourths the way down this page:
http://www.agilitynut.com/signs/mo4.html#152

And how these functioned at night (not my video):
http://www.youtube.com/watch?v=k-m4xcocevI

Dale’s Grand Burger — a tiny burger stand — the roof is Fotomat-ish (but too big to be that): 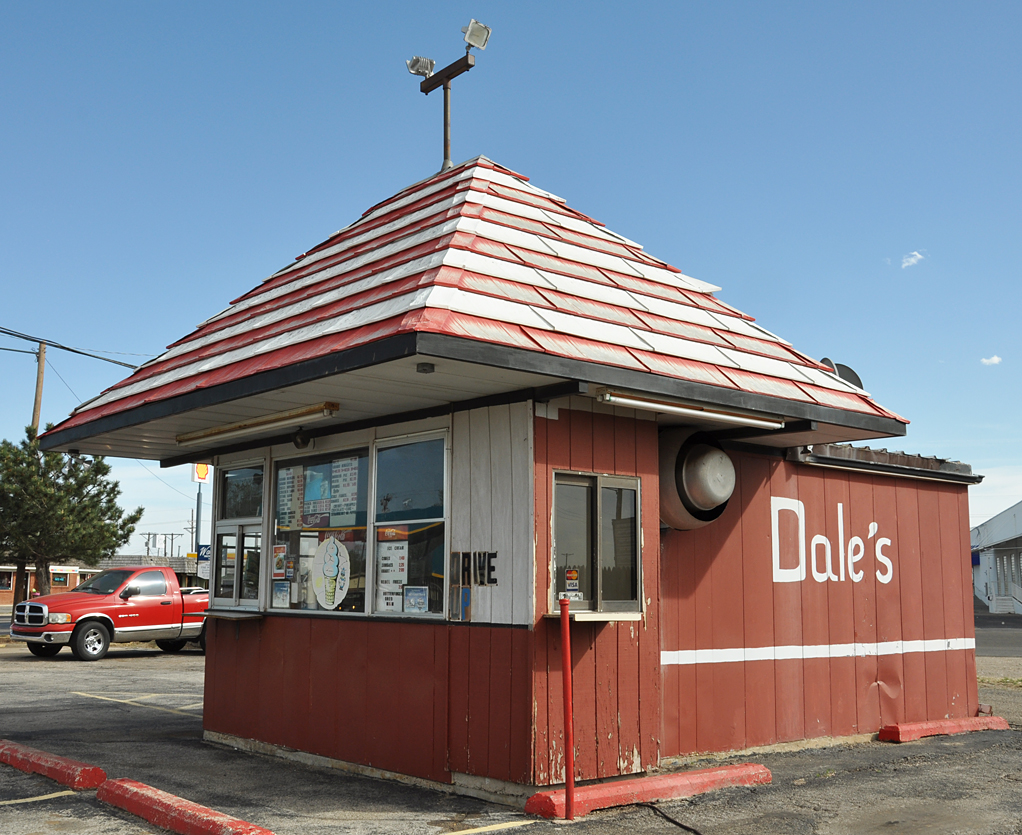 On to Adrian — which is the halfway point of Route 66 (midway between Santa Monica & Chicago): 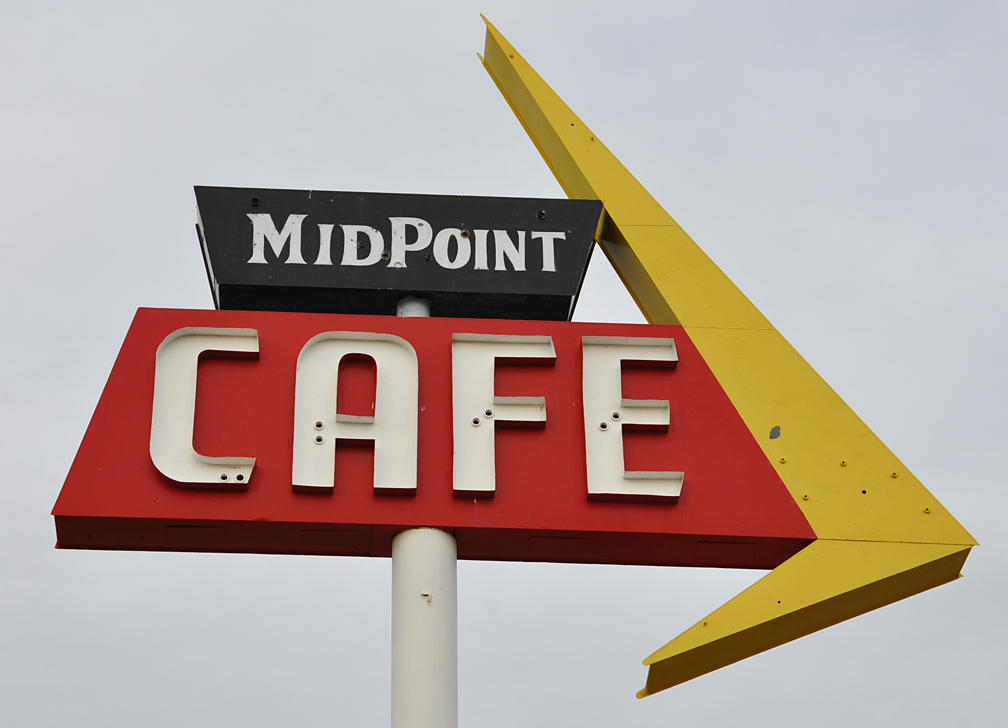 And lastly, running way late for this one, but I wanted to finally check this off my list.  Not that it’s anything that will be covered at my website but still an important tourist attraction:  Cadillac Ranch.  I was running out of daylight & driving 90 mph hour — but we made it.  The sun was setting so I guess that’s why all the photos came out blurry.  But you get the idea: 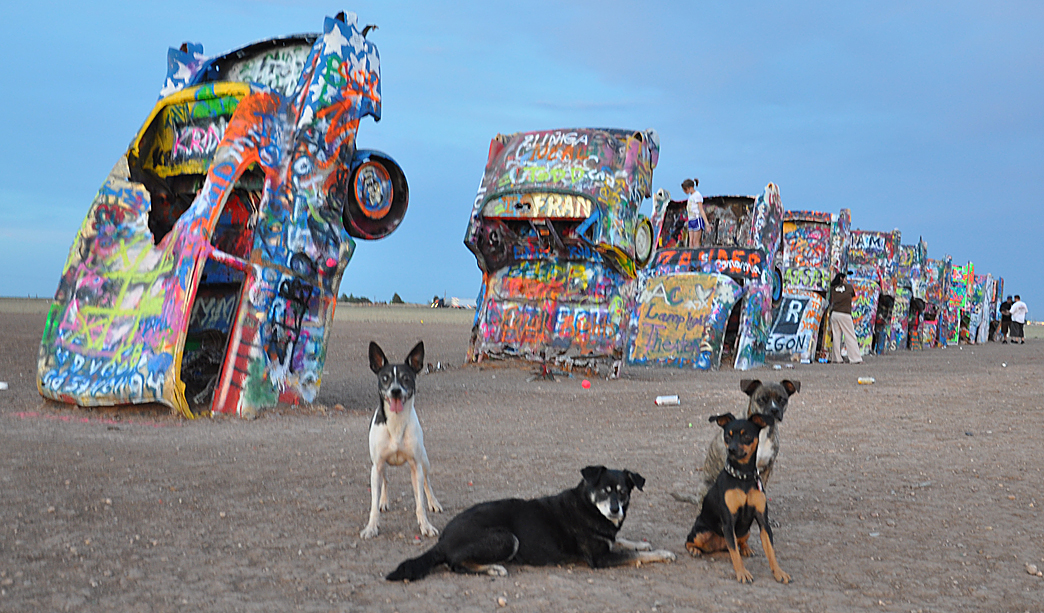 Oh, and for those of you keeping score — I got just one speeding ticket in Texas — and two warning citations.  Not bad considering how many hours I was driving, mostly above the speed limit, illegal U-turns, rolling stops, etc.  I bet I got an extra 100 stops in because of it.  Well worth the $170!