OK — got my second wind while I was uploading tonight’s batch to Flickr & dozing off during the “processing” phase.

Finally, a few doggie pix.  I know, I need to get some actions shots but this will have to do for now.  Fixie’s  “Are we there yet?” look.  I usually put the arm rest down for her since I know she likes to rest her head on it between napping and staring at me. 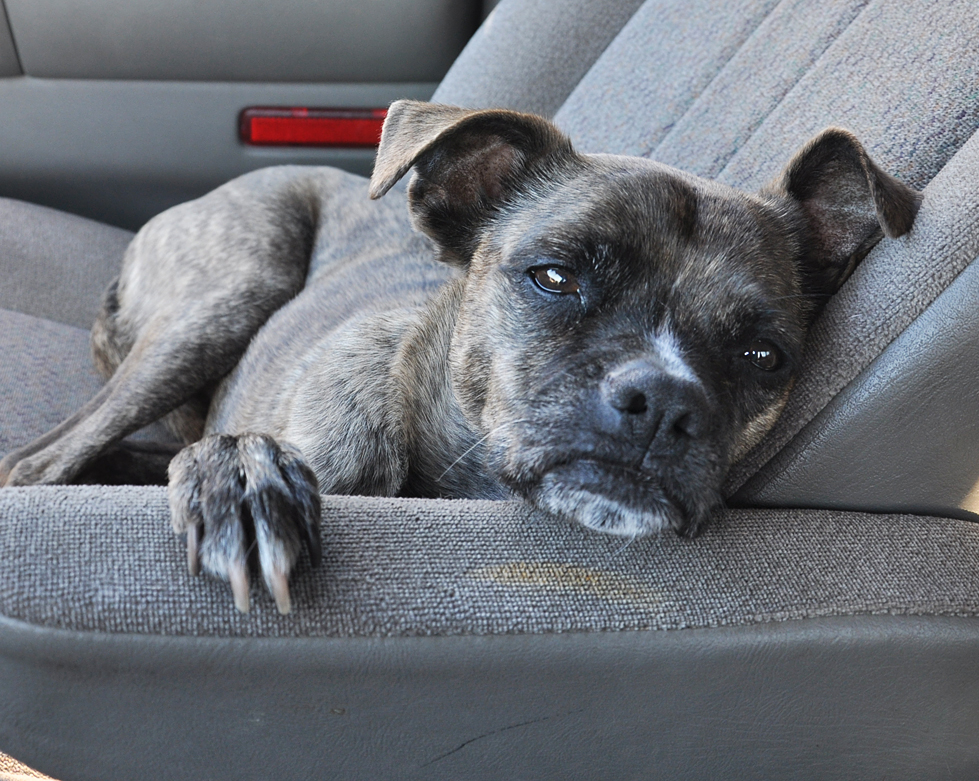 Grip in the back with her “Is it time to eat again yet?” look.  This is an afternoon shot when we’re all pretty zoned out.  I probably look even more drugged than she does most of the time: 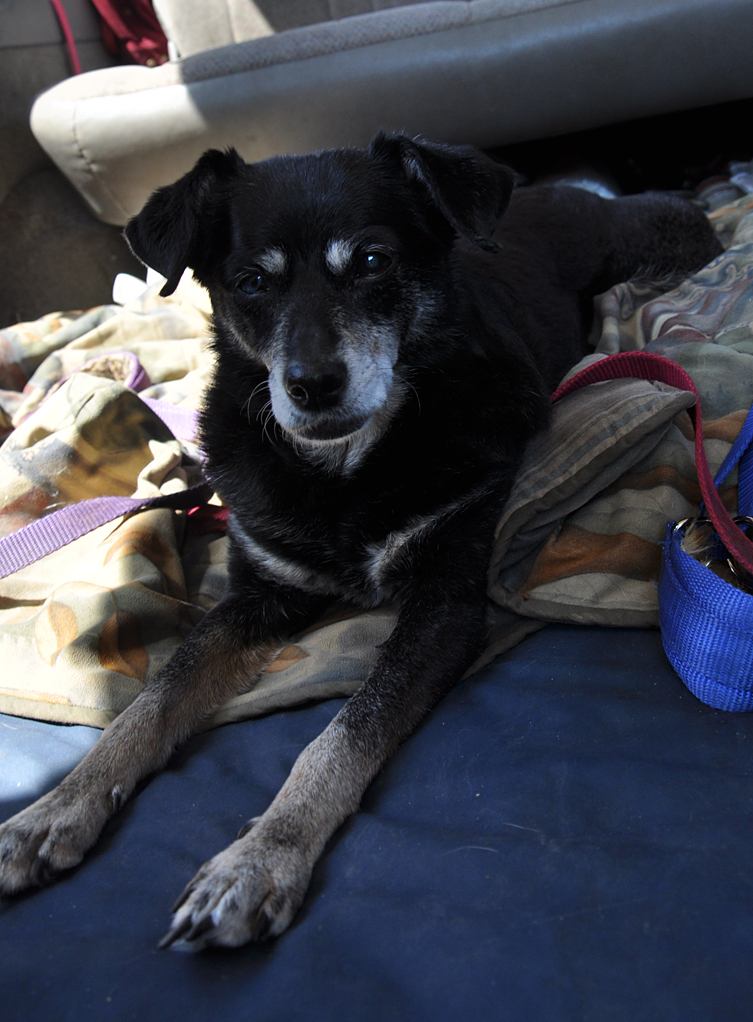 And Grem using Nik as a pillow.  An odd angled photo — Grem is really about half his size:

We checked out a dog park today since it promised access to White Rock Lake.  I was hoping for more of a beach-like setting.  But it was a pretty small area.  Luckily, we were the only ones over there though.  Everybody else was in the non-water parts — go figure!  It was 90 degrees folks!  But it was good to get the dogs shivery and for me to clear my head from an intense day of solid driving and hopping in/out of the van.

I’ve noticed a lot of repurposed Denny’s buildings in Texas:

and what I call the Denny’s “crown type” (since the roof is shaped like a crown, sort of) now used as a vet’s office:

A couple signs to marvel at:

A neat mid-century building, now a little down on its luck.  But still great elements:

The same place had this fun advertisement.  I don’t know if Whirly Ball ever caught on but it sure looks like fun.  And what’s with the text on top that just begs for graffiti?

Speaking of ballies… There must be more theatres in Texas with ballies on top of their sign towers than anywhere else.  Or are there any anywhere else?  I can’t think of any but then my brain is pretty numb right now.  And so, even at least a couple non-theatres in Dallas today with these ballies:

This one’s pretty scroungey and impossible to shoot.  There was the other side with less light and no poles in front of it.  But the cowboy was completely peeled off on that side:

Once a marvelous theatre: 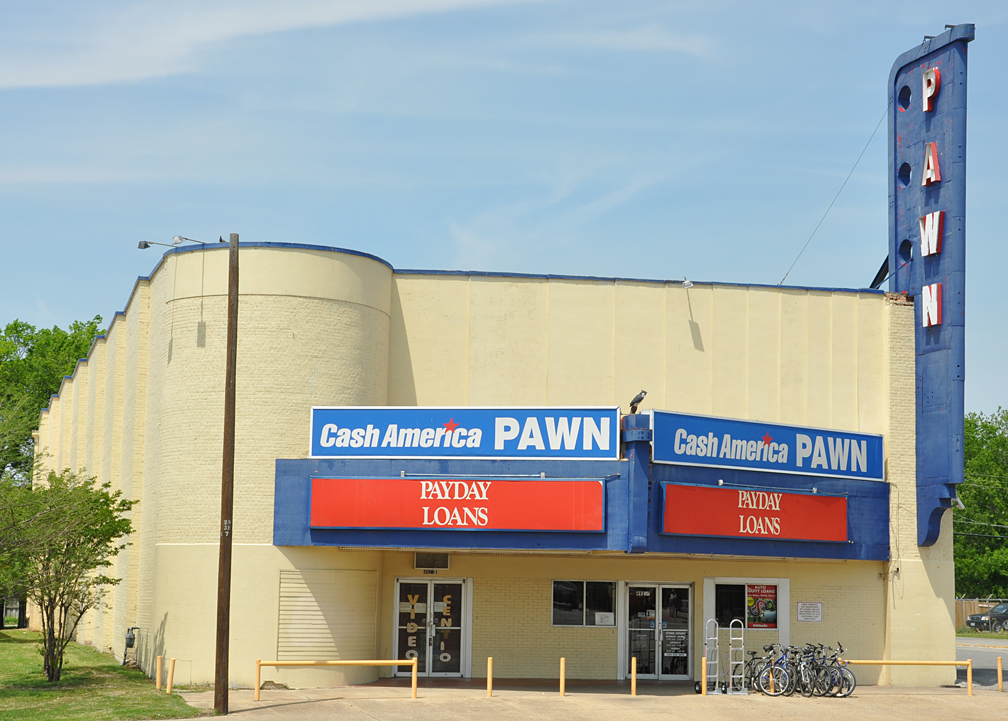 Had to shoot this one.  At first, I thought it was a reference to those illustrations of dogs playing pool & poker.  But the figure on the left might be an armadillo.  So maybe it’s two armadillos after all?  Whatever — I just love the perspective and everything about this:

Today was hotter than the past couple days — but not enough to make me consider getting the AC repaired.  No way.  If people did all that roadtripping in the 1950s without it, so can we!  Just another excuse for more ice cream.  Here’s a tribute & snack to the Dairy-Ette where I had a root beer float which was consumed in less than five minutes.  The place opened in 1956. 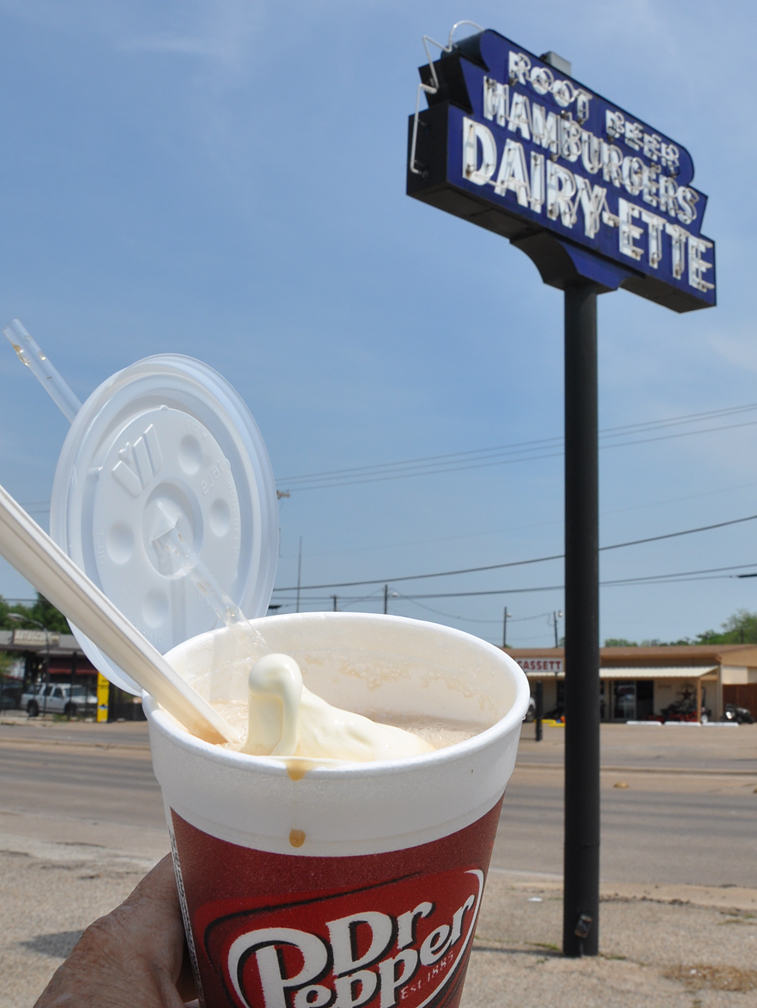 A modern sign so it won’t make the website — but I can post it here for everyone’s enjoyment.  Unlike most cities and states around the country, it seems Texas is not so neon-phobic.  (Meaning that most cities forbid neon signs — but have no problem with LED crap):

I really, really wanted to get better  shots of the waterfall billboard than last time.  The best way is from the Stemmons Freeway but it’s so crazy that I’m a little chicken to pull over and shoot.   If only those dogs would do a little driving for me sometime!  So I tried from below and there were just too many trees — but you can kinda sorta see the waterfall: 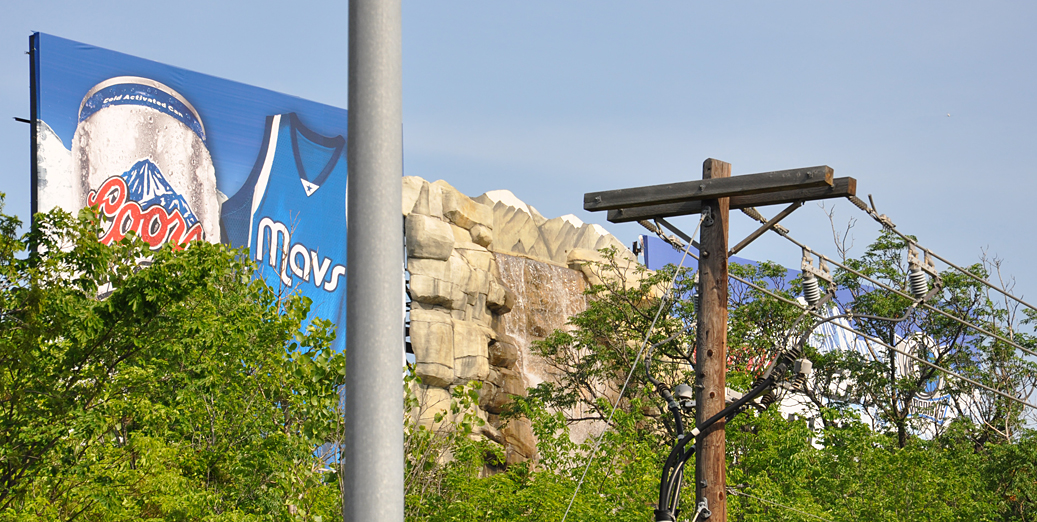 So I hopped the chain link fence (what a girl won’t do) and hiked up the backside of Goat Hill.  No better luck.  No way to get in front of the sign — just a steep cliff.  But another semi-view of the waterfall.  I saw the sign at night for the first time from the Stemmons as I was driving to shoot Big Tex.  The sign and waterfall are lit really well — a dangerous distraction for sign lovers! 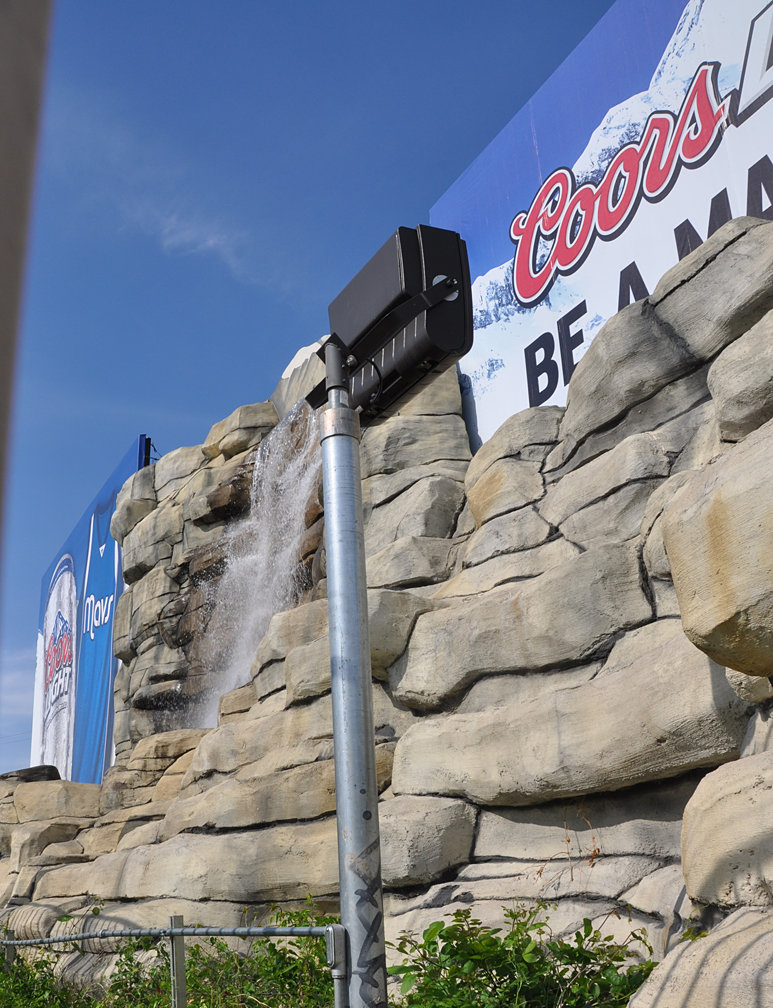 So here’s a shot of the sign from someone with more balls than me and either pulled over or has a quick trigger finger as a passenger:
http://www.flickr.com/photos/pattyk62/3751203366/

I think I saw three Good Luck Burgers today — but this is the best sign of the bunch.  The buildings were all pretty skanky:

Last one for the night — keep thinking sun!

Only three more days for Texas and I’m feeling sad about it already.  But when I look at all those circled cities on the map that we actually made it to, it’s quite an accomplishment even without West Texas.