Today, we reached our western most point and began the slow crawl back towards home.  Another two weeks to go.  About four days behind schedule.  So much of the southern IL, IN, OH & KY stuff will have to wait til another time.  But I’m doing my darndest to get 98% of my KS & MO stuff done.

More miles and fewer stops today since western KS is far more rural.  More gas stations than neon signs.  But it’s really so pretty that I didn’t feel the pain of only about 3 hours sleep until about 5pm.  Got a giant gas station coffee and forced myself through the bleeriness.  It also helped to have good radio company (Car Talk, Wait Wait, and I’ll admit, Prairie Home Companion).  I was doing alright til I turned off the engine tonight and then I took a four hour nap.  Yikes!  So now it’s 2am as I’m cranking out this stuff.

The dogs got some swimming in at a state park somewhere — forget the name.  It was about 20 degrees cooler and I only ran the AC for a few hours in the afternoon.  Dark clouds for the past few days always seem to be east of us.

I’m not sure about the blogs for the next couple days since I think I’ll be socializing.  That’ll put me two days behind and I don’t see how I’ll ever catch up unless I hit some major rain and can just park & blog.  What shall I do about this?  It’s not so bad catching up on one day with a double blog — but three is just beyond me.

On with today’s photos.  This stone-adorned building in Russell might have been a garage.  Does anyone know its history? 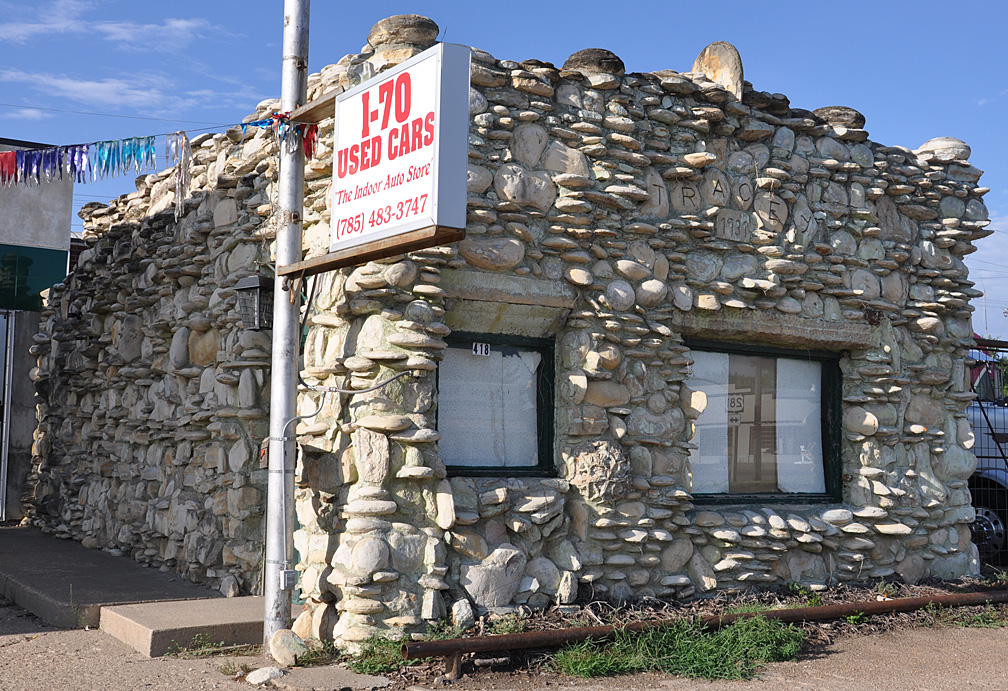 A couple more signs from Russell.  I think this might have been the Kent Motel originally:

I’ve been looking for sunflower imagery and this is the best I’ve come across so far.  The plastic panel looks like it was a spinner.  I bet that part was neon originally:

This is all that remains of this drive-in in Russell:

There was lots of good stuff in Hays:

This sculpture was installed in 1981.  More about the sculptor under #49 at this page:
http://www.haysusa.com/html/the_arts.html

This fun piece is just north of town: 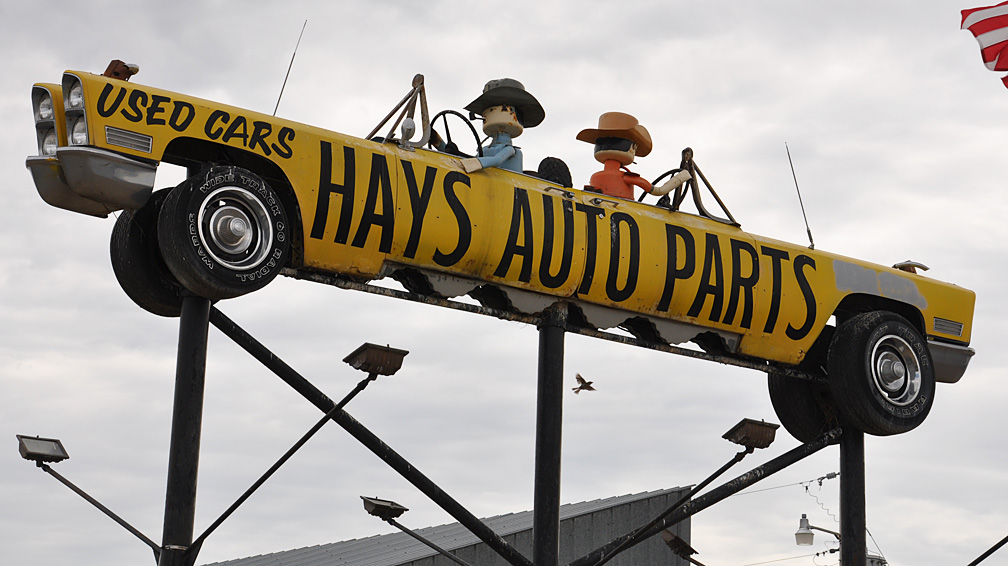 Some curious cows.  The dogs were flippin’: 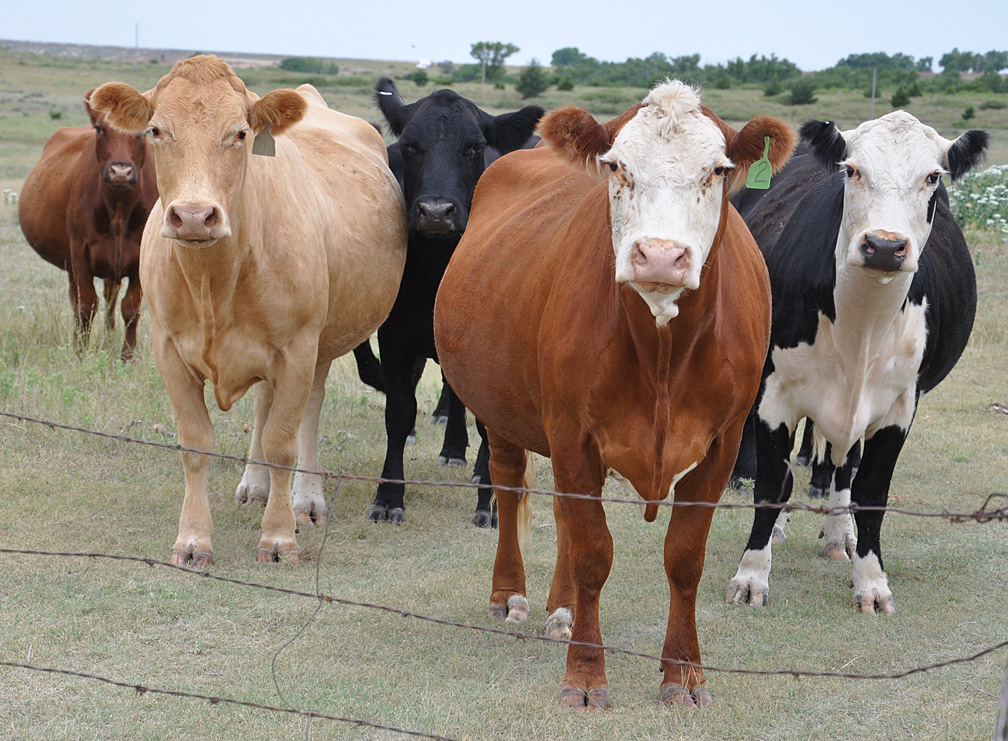 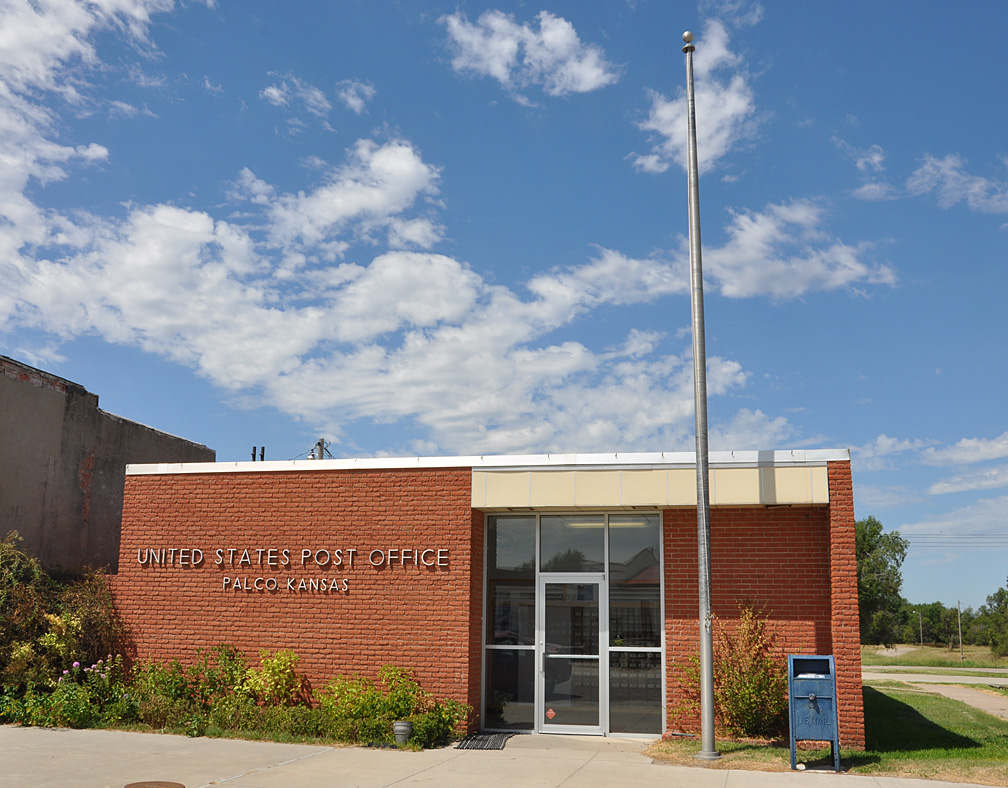 From Hill City — the Money Chevrolet Truck Center has a pretty big collection of vintage cars and signs:

Goodland is chock full of interesting stuff for such a small town.  This intact mid-century furniture store has it all:  louver screens over the windows, metal letters, stone, and tile:

Last photo tonight from our western-most point for this trip:  Kanorado.  So named since it sits in Kansas, right next to the Colorado border.  Lots of clouds, trains, and grain elevators today. 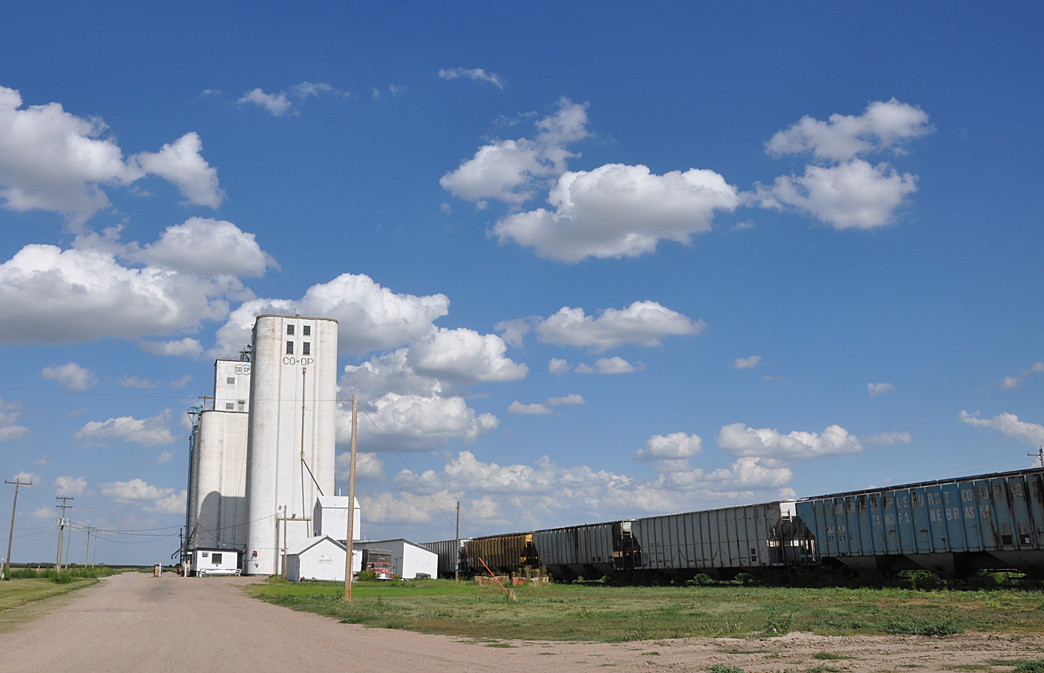