OK — time to play catchup since I’m a post behind.  I haven’t even started working on today’s photos and I took TONS.  It’s already 11:15 pm but I just bought a gigantic coffee at the 24/7 Travel Store (smallish truck stop-y gas station) here in Russell so I’m feeling pretty ambitious.  But I’d better keep things slide-show-ish and keep the commentary limited so I can get stuff done and get back on track.  I suspect the next post won’t be as chatty as my brains fizzles to mush.

Way back yesterday morning then… stuff to do in Kansas City, KS and keeping an eye out for open, reliable-looking AC repair type places.  So let’s start with a couple signs from KCK:

Named for its location (on Rainbow Blvd.): 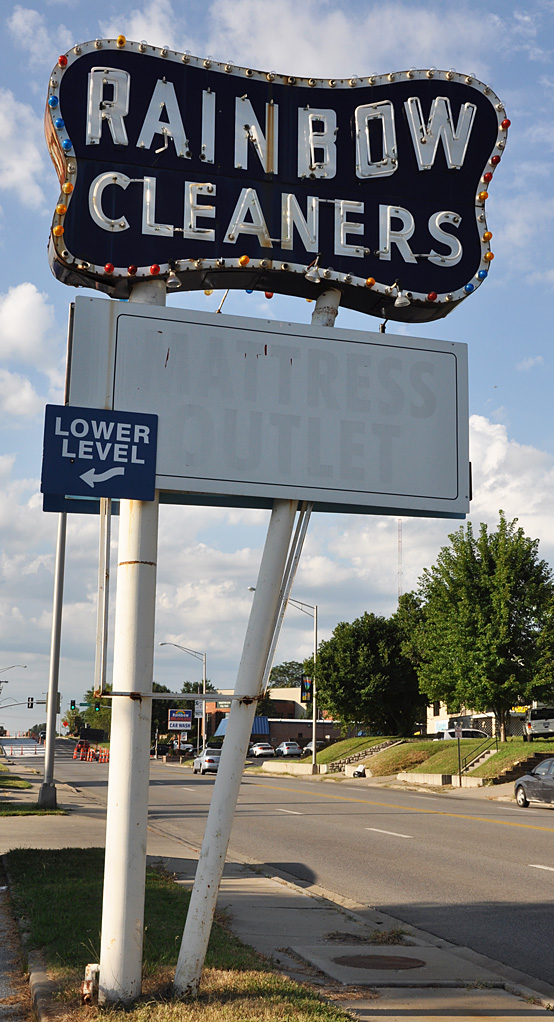 I’ve seen a few repurposed Safeway signs on this trip.  I’ll share this one in Mission with you to show off some more of those gorgeous clouds I’ve been witnessing.  I don’t know if this sign will survive the next business incarnation: 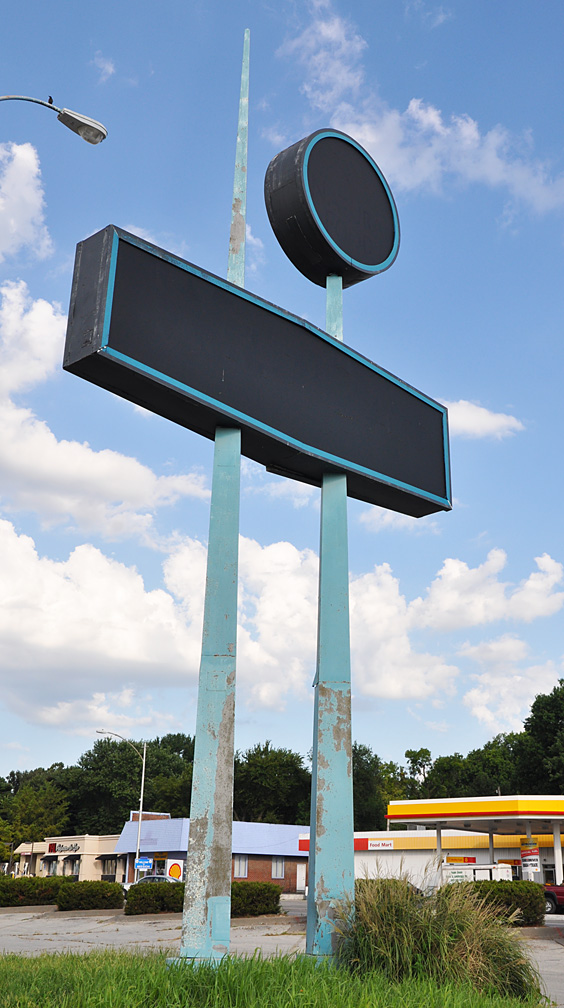 And so Mission was to be where I spent about two hours of my morning getting Sparkle’s AC serviced.  I saw a respectable looking Goodyear tire place and it wasn’t five minutes til they pulled her into the bay.  The found a funky hose (I think it was) and there was only 1 gallon of freon when there should have been 3.  So charging that took about an hour.  It was already 90-something at 10am so I really had no choice in the matter.

Normally, this Goodyear has wi-fi which would have been a nice diversion but the modem was down or something.  I did shoot this nice midcentury bank across the street, thinking it was a nice sky blue & white theme. 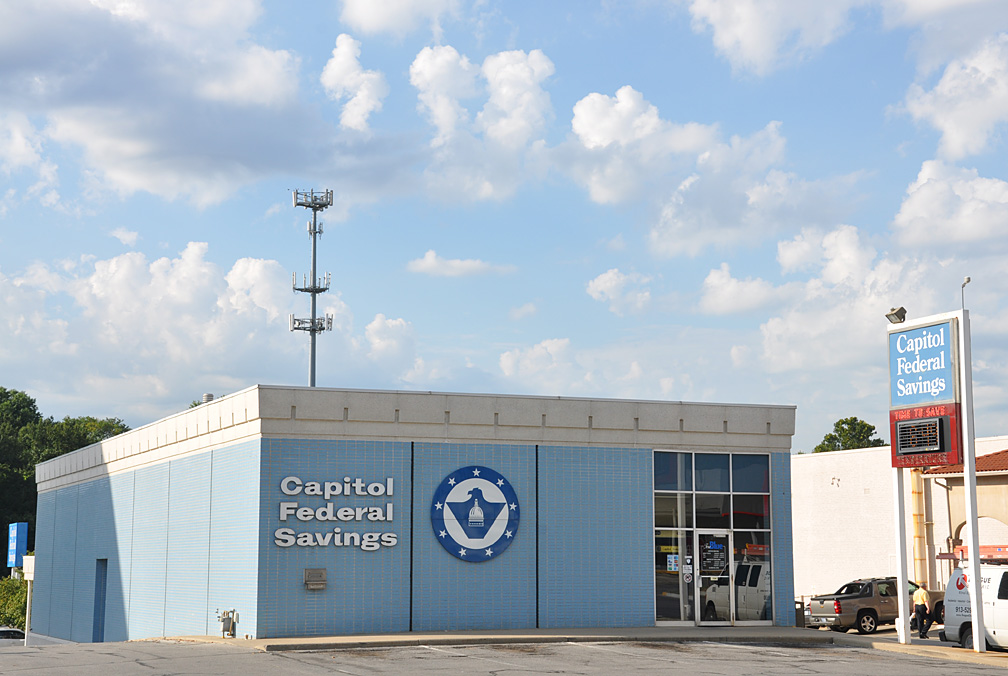 When I got rolling again, not less than a mile down the road, I saw a sign that said site of new Capitol Federal Savings.  Uh oh.  Looks like that cute little bank might be endangered.  The KC suburbs are rampant with new development — bigger, newer, nicer — the same chant going on everywhere in America.  Shoot ’em now folks!  These things have a way of disappearing.  Praise the business owners for keeping their old signs/buildings and plead at your community meetings and electees that these things be spared.  I’ll keep my lecture short for now.

Sometimes you just can’t tell what’s “real” (old) and what’s retro (fake imitation).  Particularly, as this retro stuff ages it gets really confusing.  This little strip mall in Mission has a stainless-looking wedding cake over the cleaners entrance and some other little stainless embellishments on the side. I sure can’t tell — but maybe a local remembers when this place was built or how long they’ve seen it there. 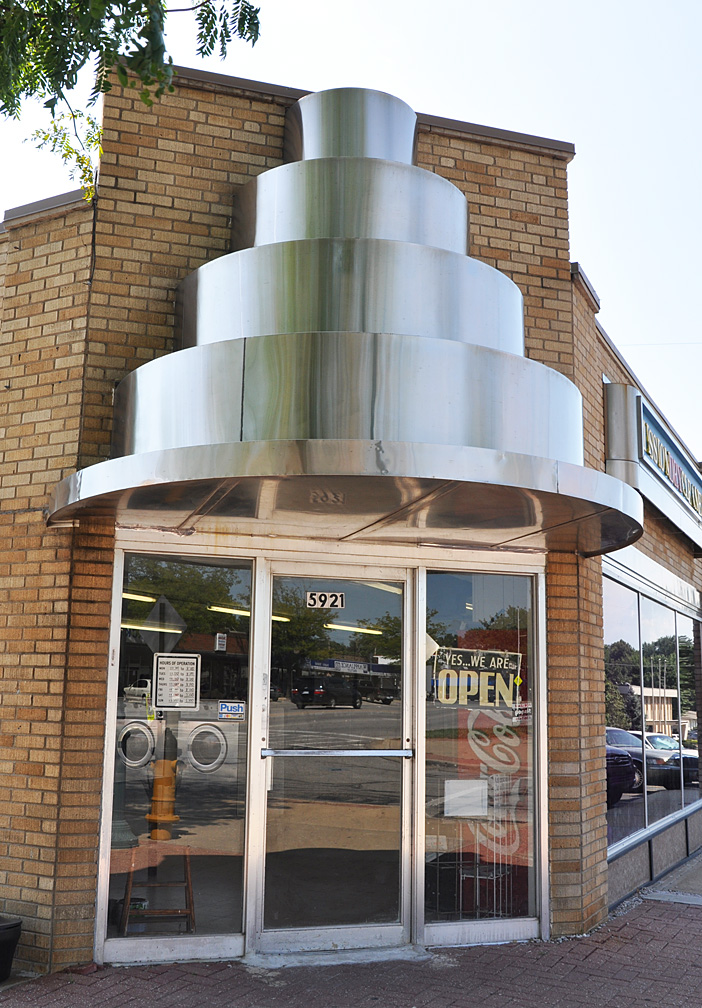 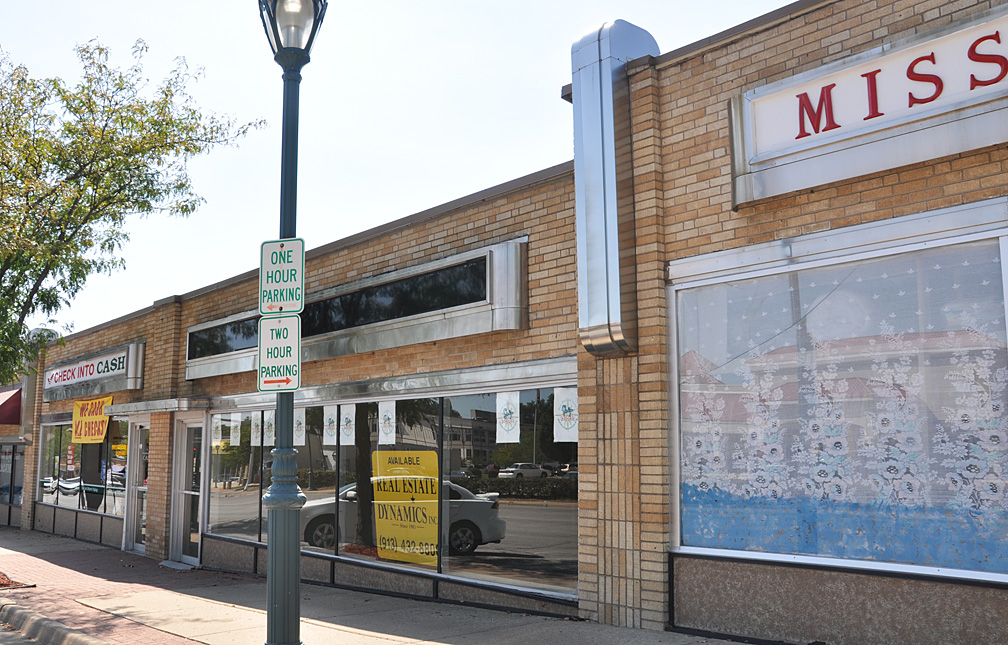 I’m crazy for this pair of arrow signs at a used car dealer in Olathe:

A truly crappy photo but I’ll include it anyway.  Taken while driving in Lawrence so you get glare and bugs.  But I hope you can make out the neat camo cab — is that wheat or what?  I’ve never seen a truck with this sort of thing before. 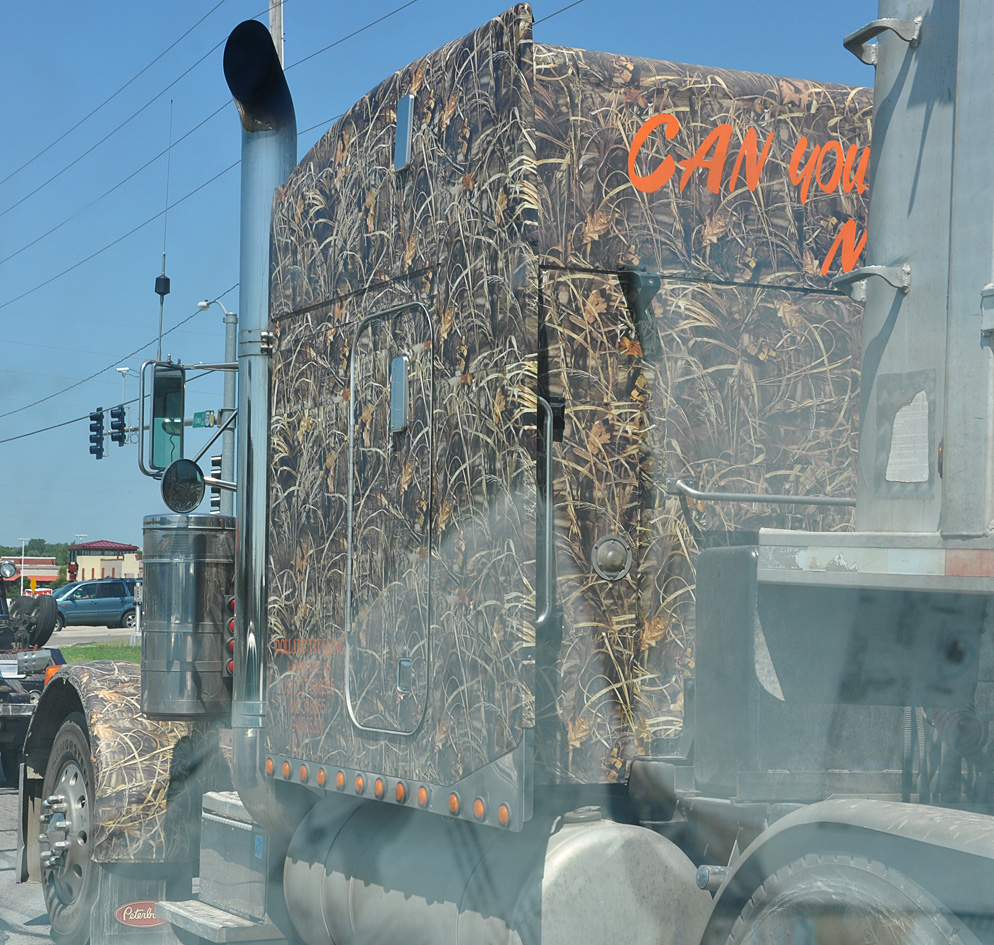 This sign in Lawrence.  I suspect these beer mugs were mass-produced with maybe other beer cos. than Coors as well — but I’ve never seen another one like this: 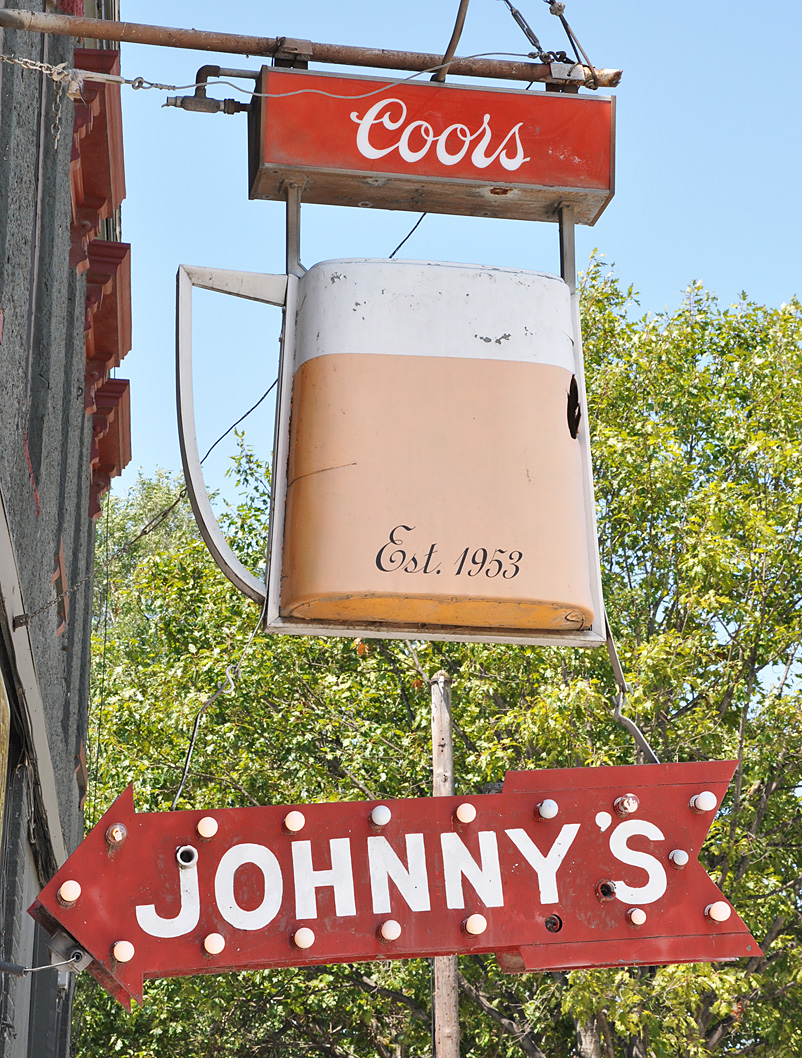 Just plain pretty.  Looks like it might have either had a name change or a heavy-handed restoration at one point.  From Tecumseh: 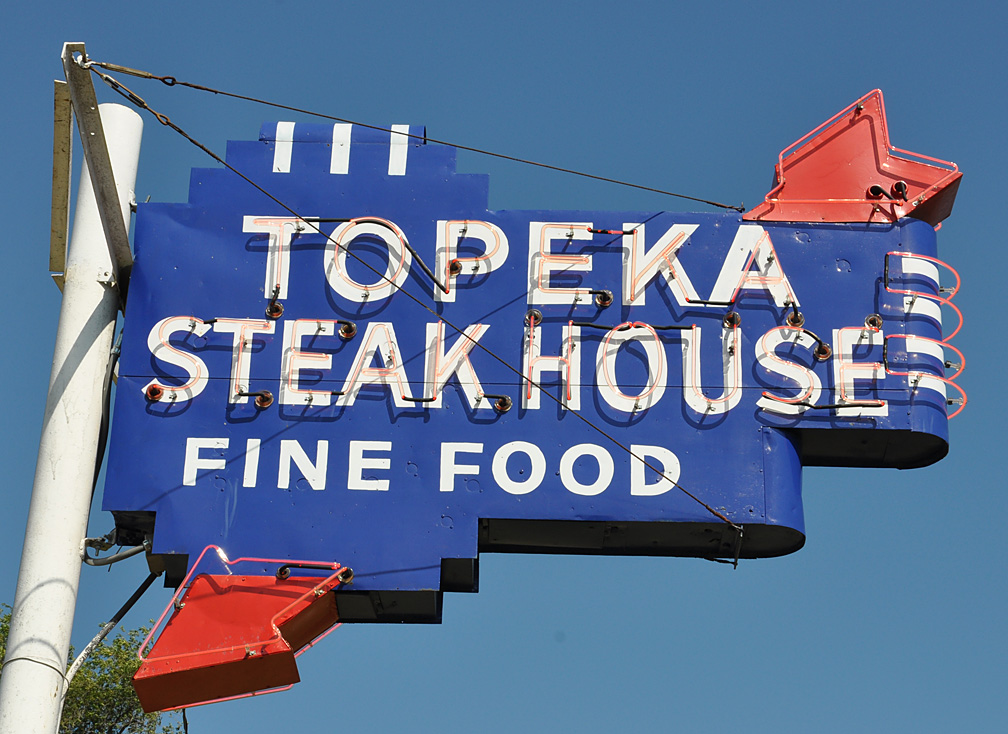 We’re in Topeka now — my first time which was very exciting.  And it was just mind-blowingly great in every way.  Great signs & old buildings.  Mid-century buildings all over the place.  For my money, I’d pick Topeka as a vacation destination over Palm Springs if you like mid-century.  Sure, maybe the examples in PS are more extraordinary — but not as plentiful or as heavily tweaked.  If you exclude houses (I usually do!), there are maybe about a dozen or so mcm buildings in PS.  But in Topeka, I bet there are 200!  PS’s mcm buildings get As while Topeka’s might get C+/B-.  But I bet the hotels are a heckuva lot cheaper, too.  And off the top of my head, I’m not remembering any neon signs or Art Deco in PS either.  Topeka’s got other fun raggedy, weird stuff, too, that PS doesn’t have.  Hands down, Topeka’s the winner in my book!

Here are just a few highlights (more at last night’s Flickr post).  A two-fer:  dogs and rustiness.  Yes, the text part of the sign must have been a lot more exciting in its prime.  I’d love to see a vintage photo of this one! 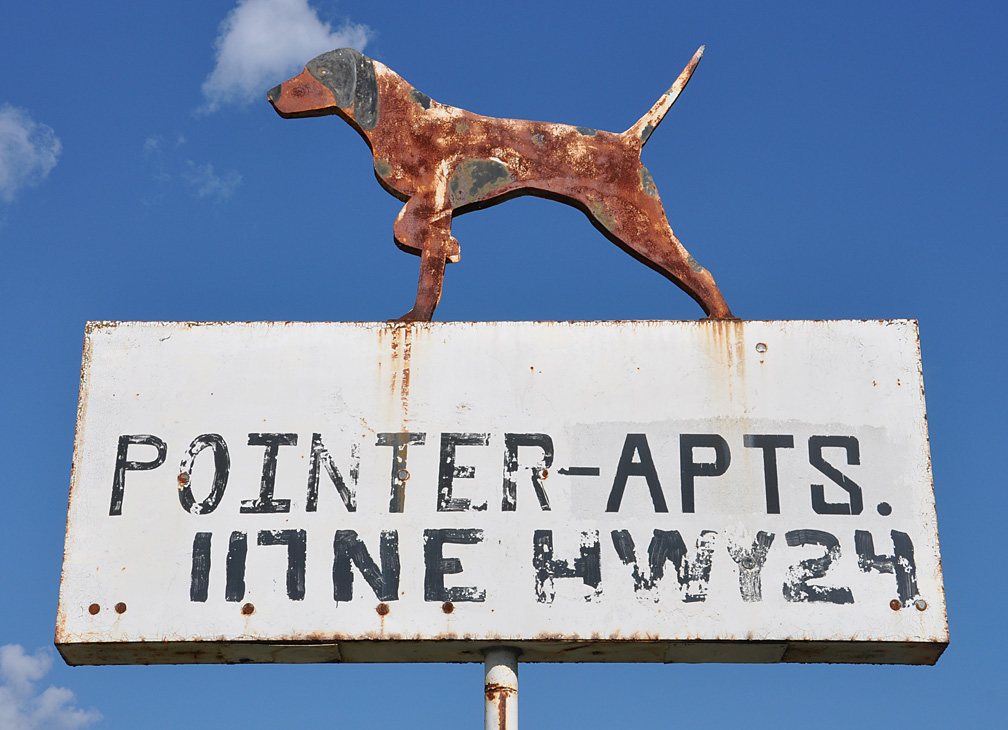 A modern sign — but so worthy of including here.  I tried to place/crop the clouds so it looked like rocket exhaust for you: 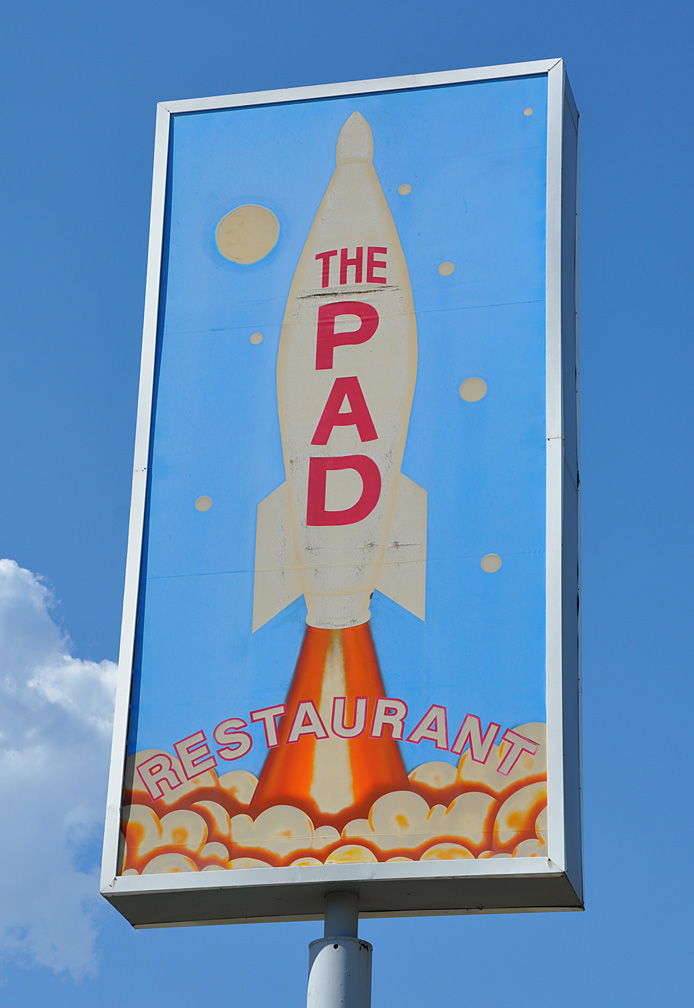 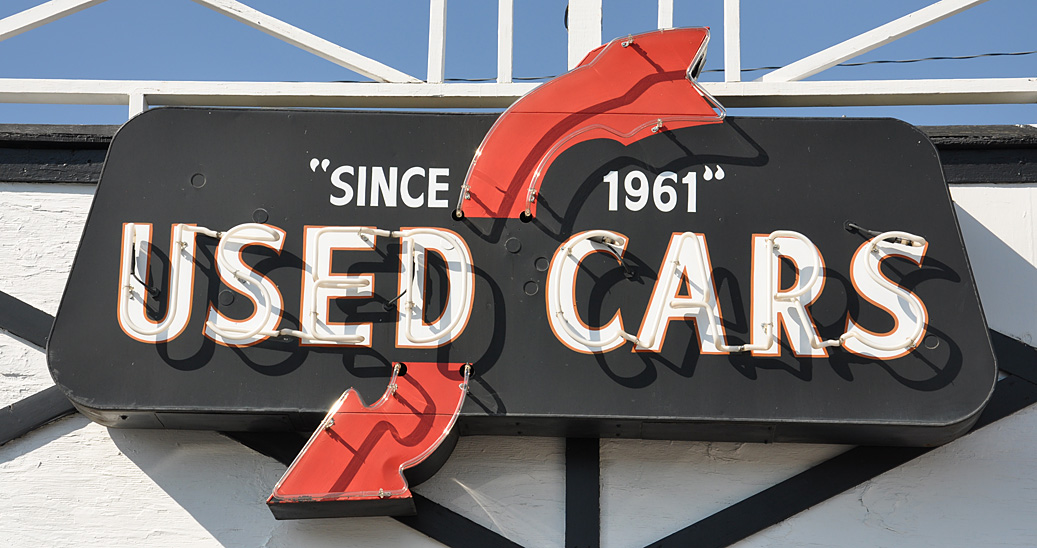 It’s been awhile since I posted any parking garage signs.  And Topeka has several nice ones.  Can someone please get me a grant or a book deal so I can just travel the country and shoot parking signs exclusively?  Only half kidding. 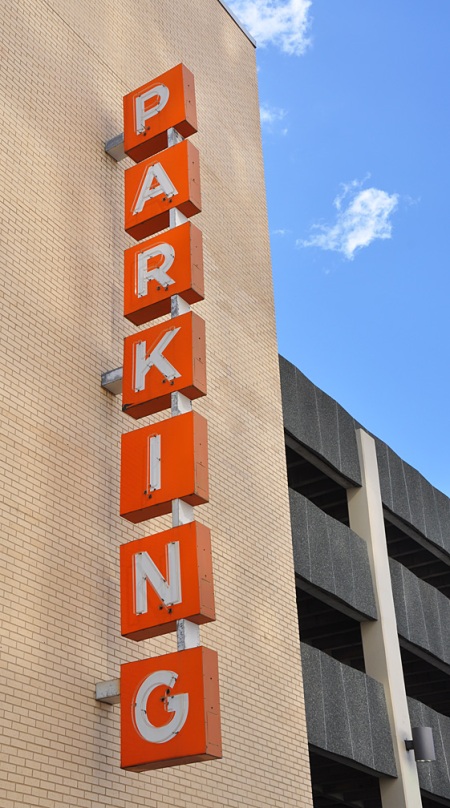 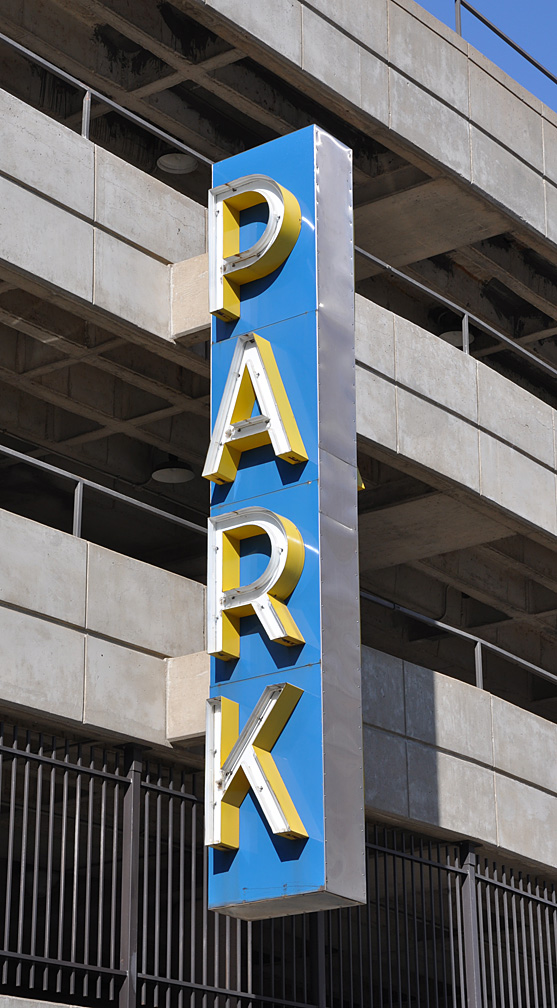 A study in contrasts.  Good Lord — that’s more awnings than I’ve ever seen in one place!: 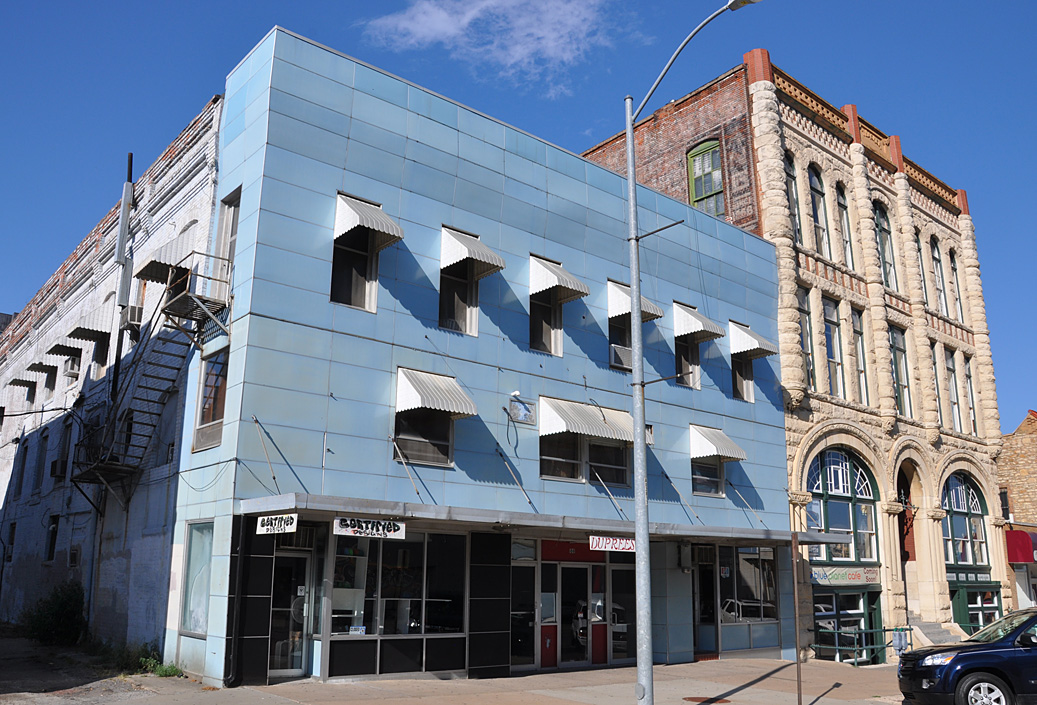 Let’s close this one out with a couple more signs from Topeka.  I’m heading off to work on today’s stuff now.  Stay tuned… 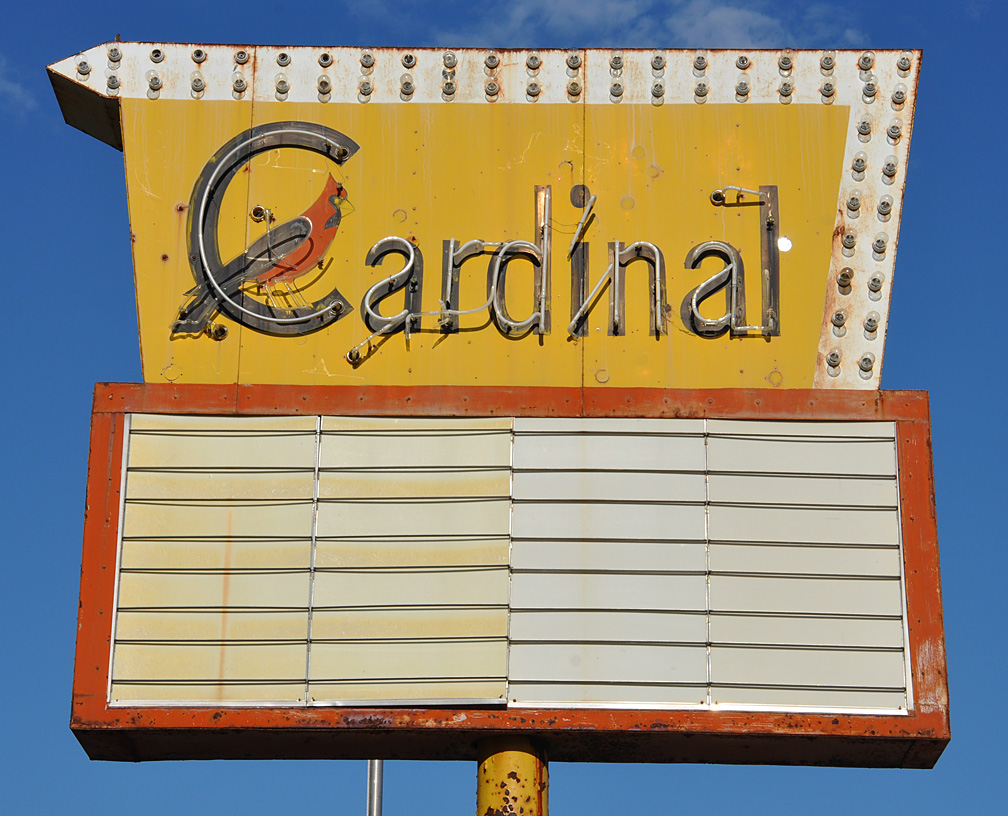 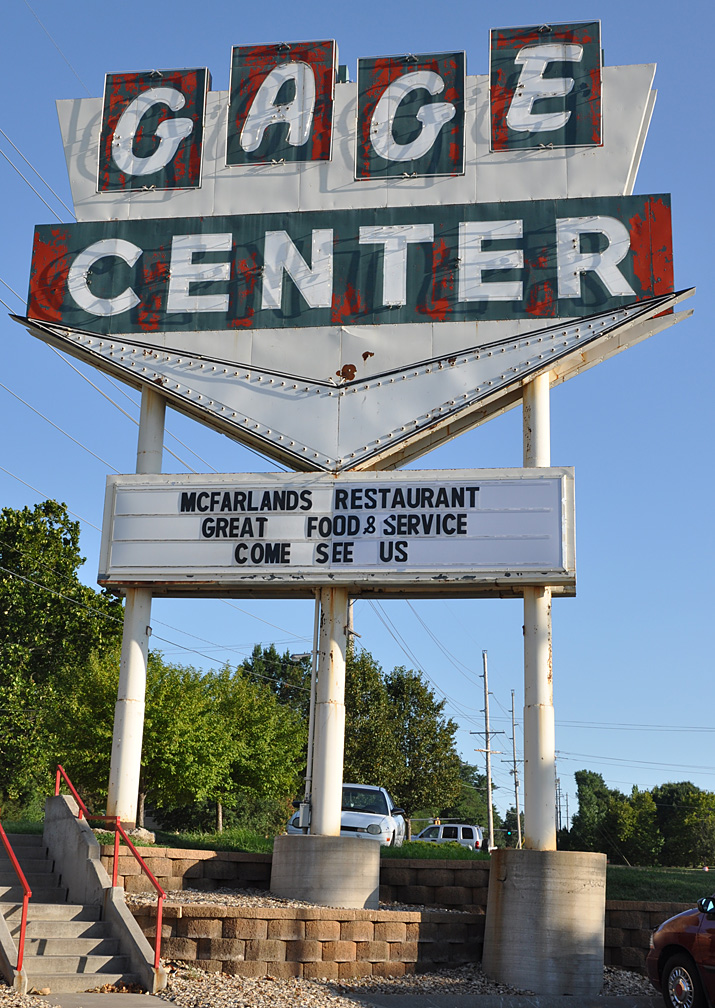