So, around 10am, we’d had enough and I turned on the A/C.  Lots of fans blowing but nothing cold coming out. And so it was.  I tried to find a garage but they would all say things like “maybe this afternoon”.  So we plugged along.  It broke 100 degrees which means it was probably 110 in the van.  I think tomorrow I’ll have better luck finding a not-so-backed-up mechanic in Lawrence or Topeka so we can get this thing fixed.  The AC has been working so great throughout this trip.  You really miss it when it’s not there — especially when you’re driving about 13 hours per day.  I did a little poking at Google and it seems air conditioning didn’t really become standard until the 1960s.
http://en.wikipedia.org/wiki/Air_conditioning

At one point in the afternoon, I thought I had a brainstorm. I bought a giant bag of ice for $2 and some garbage bags.  I filled up/spread out the ice in a bag for the dogs thinking they would really like to lay on that to stay cool.  But everyone seemed averse to this crunchy, weird thing.  Eventually, Nik figured out the benefit when I moved it to the front seat: 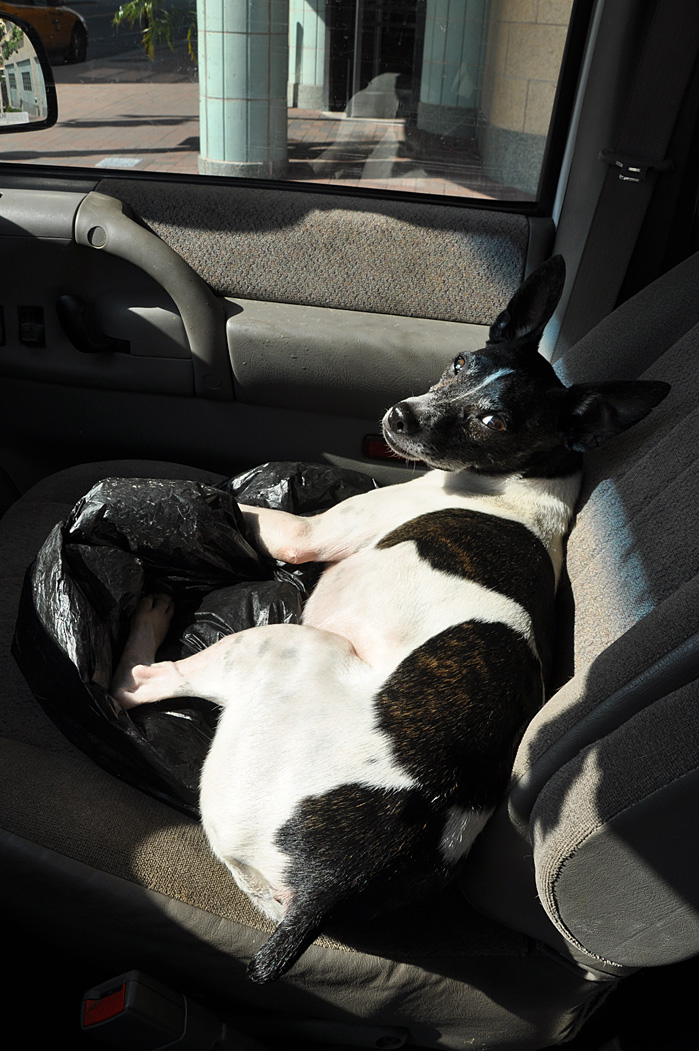 When I pulled in to reshoot one of my favorite mid-century churches, I spotted it from a distance:  a hose!  Fantastic!  Nobody around so I took the liberty of giving everybody a good long douse.  I even doused my head for awhile.  Then a couple stops later to see the giant Jesus statue, there was a little pond right there for the kids to swim in.  Even an atheist like myself found these “the Lord will provide” events pretty remarkable.

This afternoon seemed like an eternity but I just kept banging through the KS stuff and eventually moved across the border to Kansas. It’s been a long, exhausting day for all of us — but I won’t neglect my homework.  Lots of photos for ya.

Unless otherwise mentioned, everything’s from Kansas City, MO where we spent 95% of the day.  This one’s showing its age — a most unusual name: 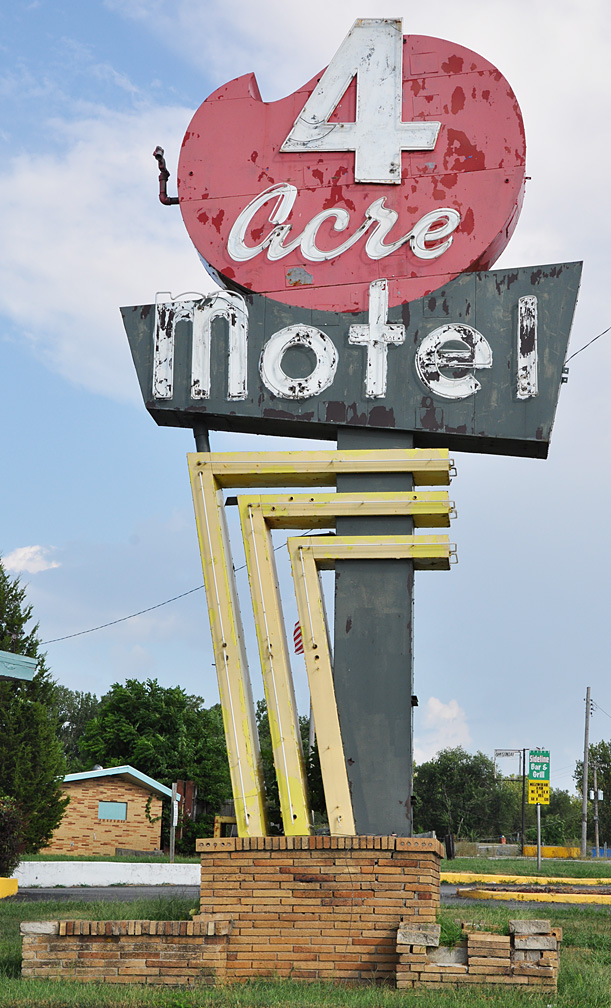 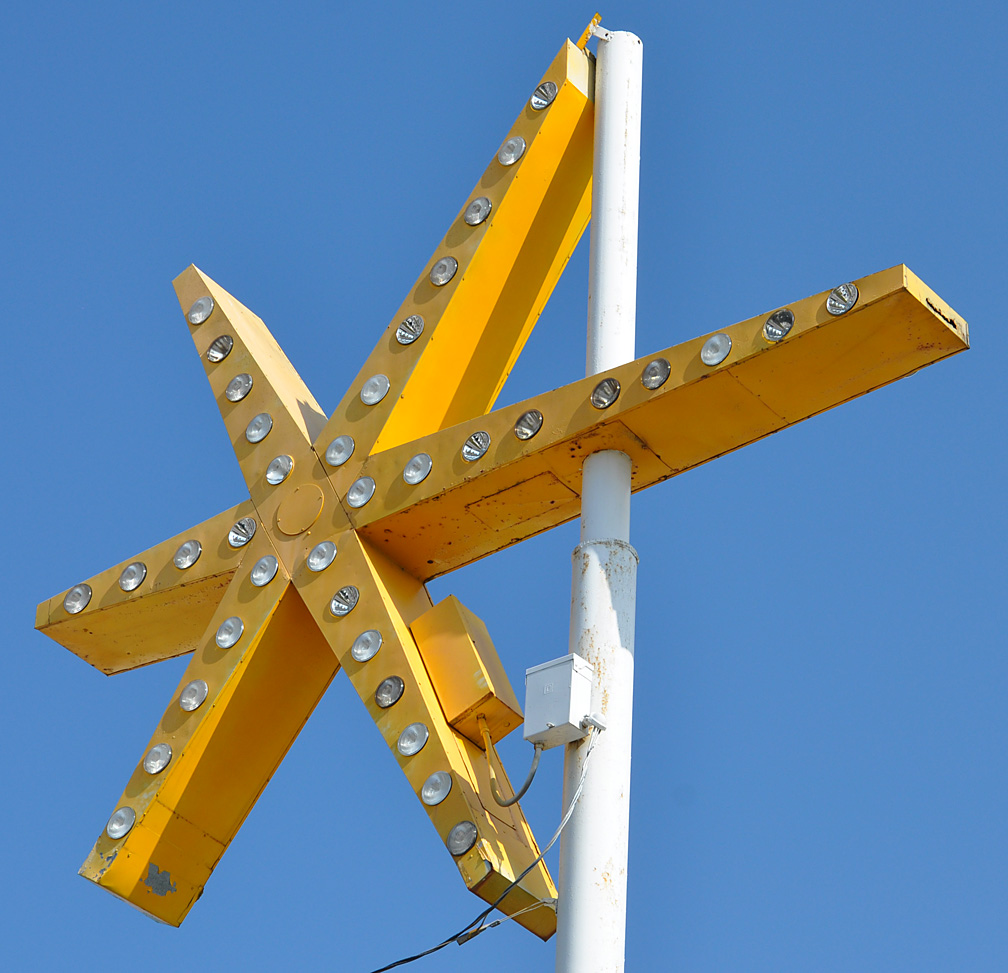 Another used car lot — multiple views of this great place.  The pole sign in front.  Note the sweet drop lights above it: 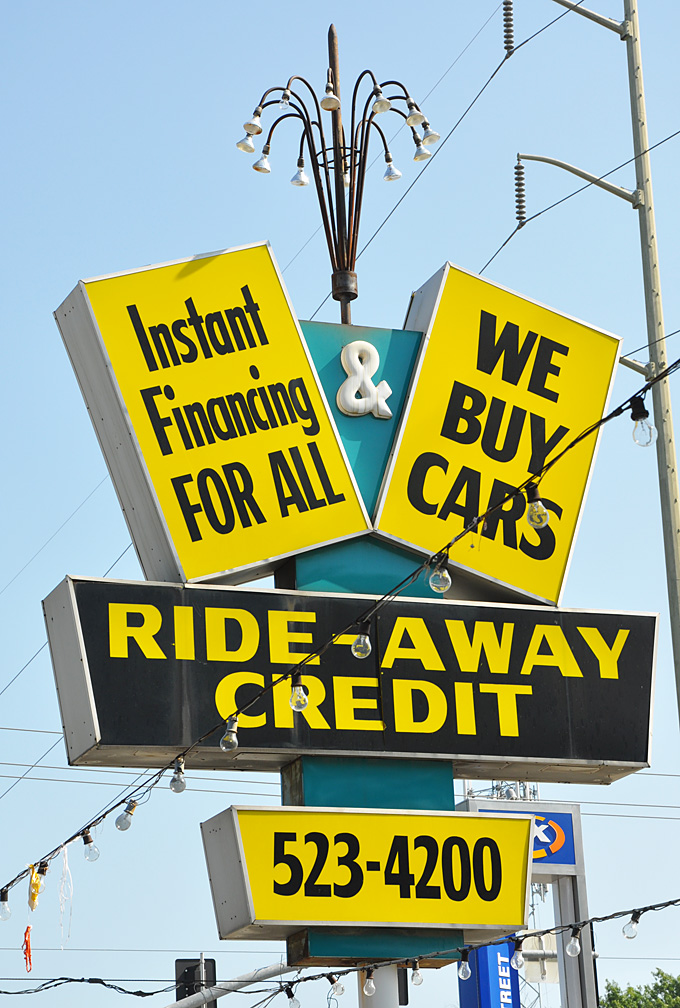 The same drop lights on top of the office (close-up below).  And odd shape — maybe completely round originally and the back part added later?  Note the strands of bulbs all over the place.  This place must be quite stunning at night. 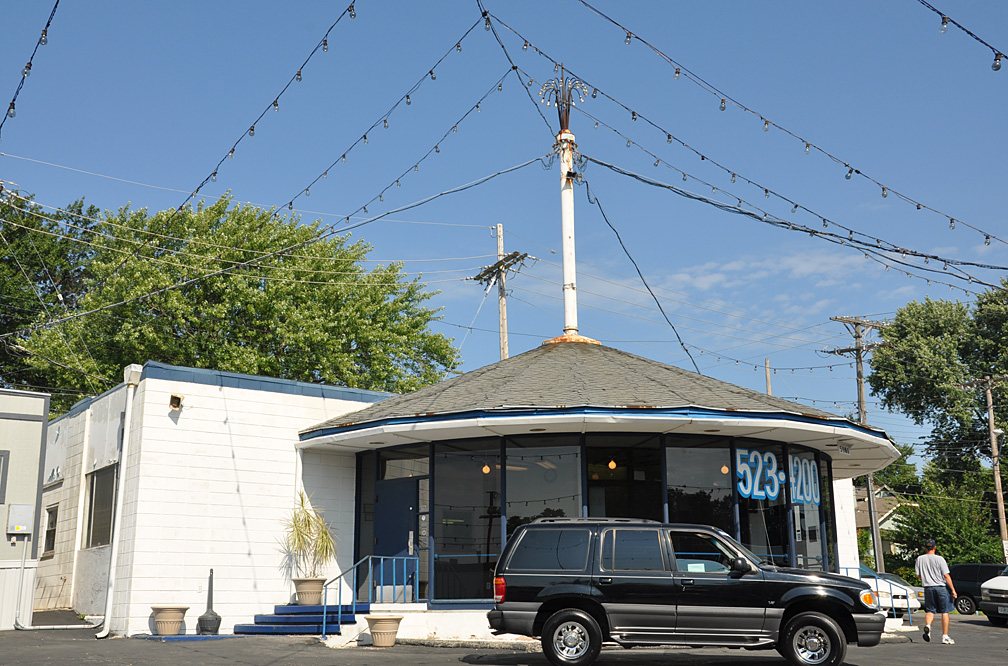 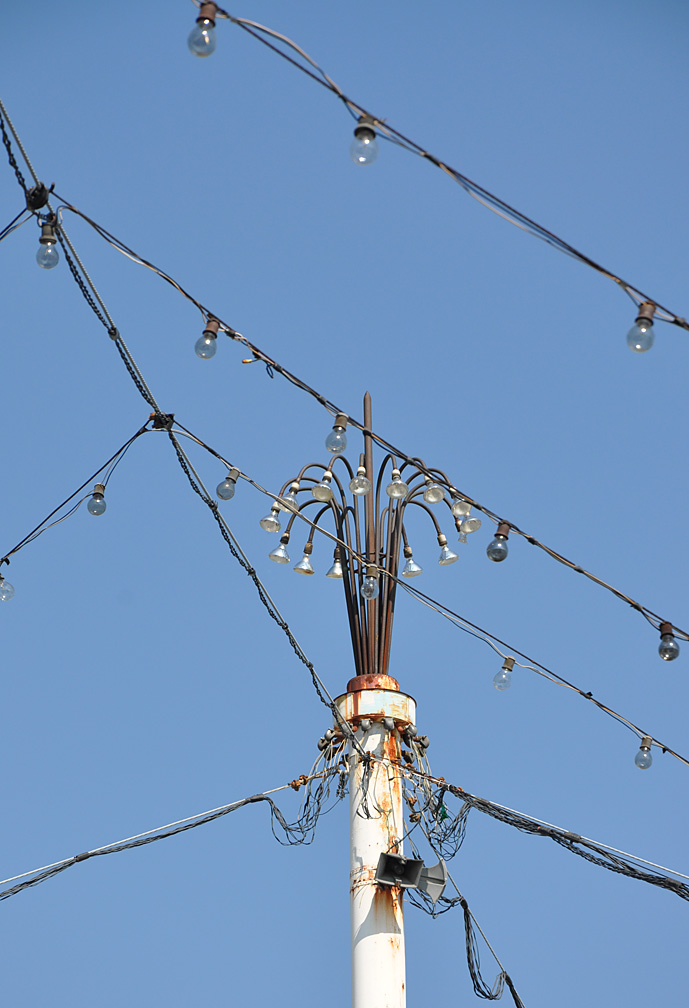 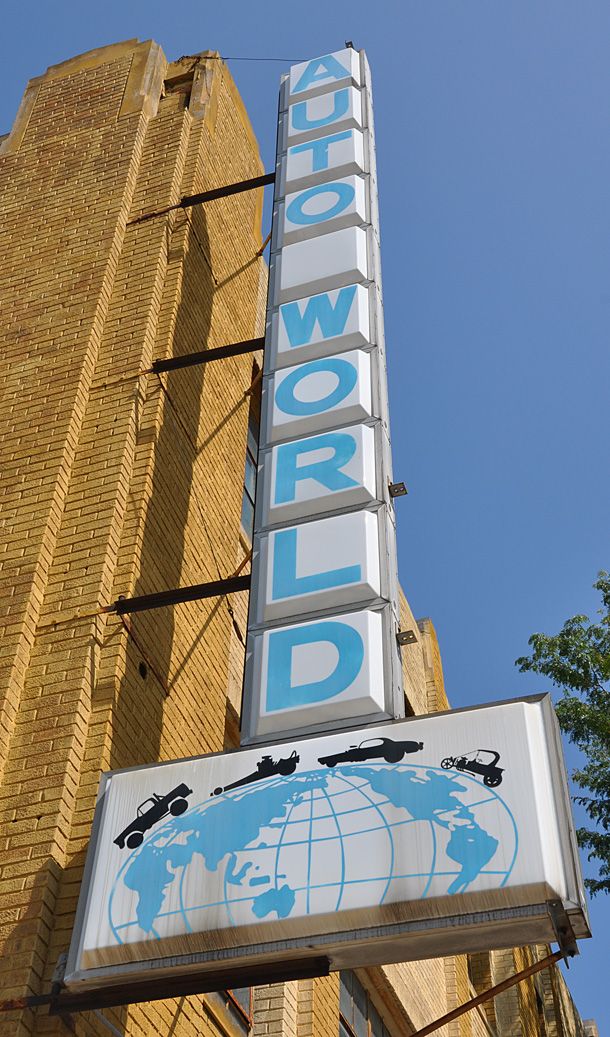 A couple of odd storefronts: 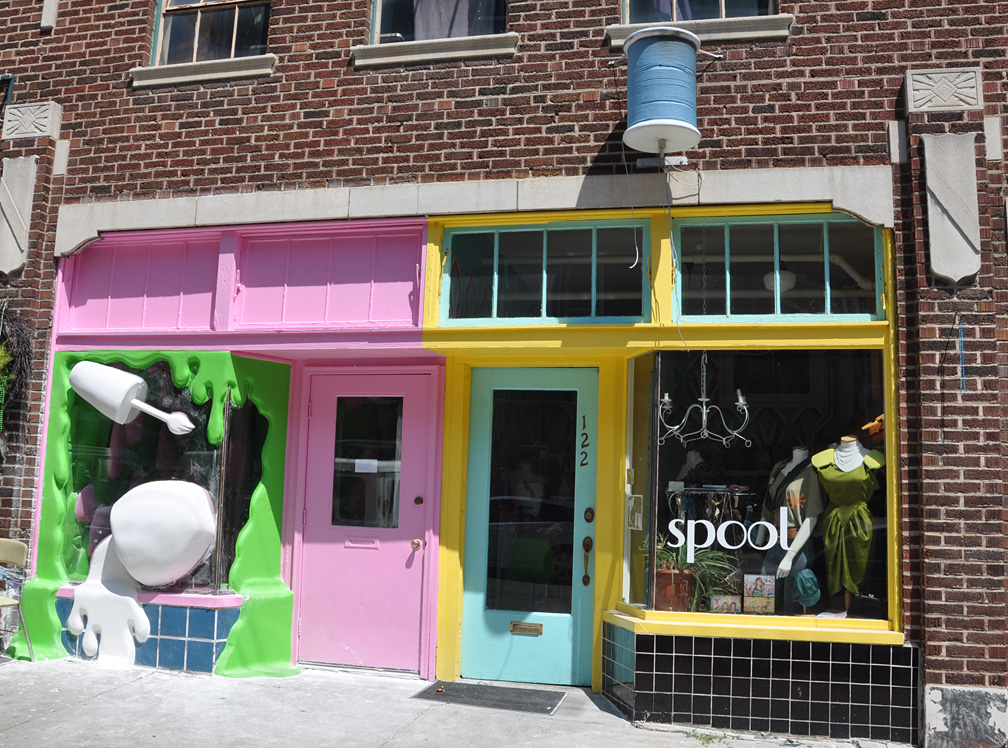 An art deco delight detail — with some twists.  The police camera — and the crane in the background.  Times sure have changed. 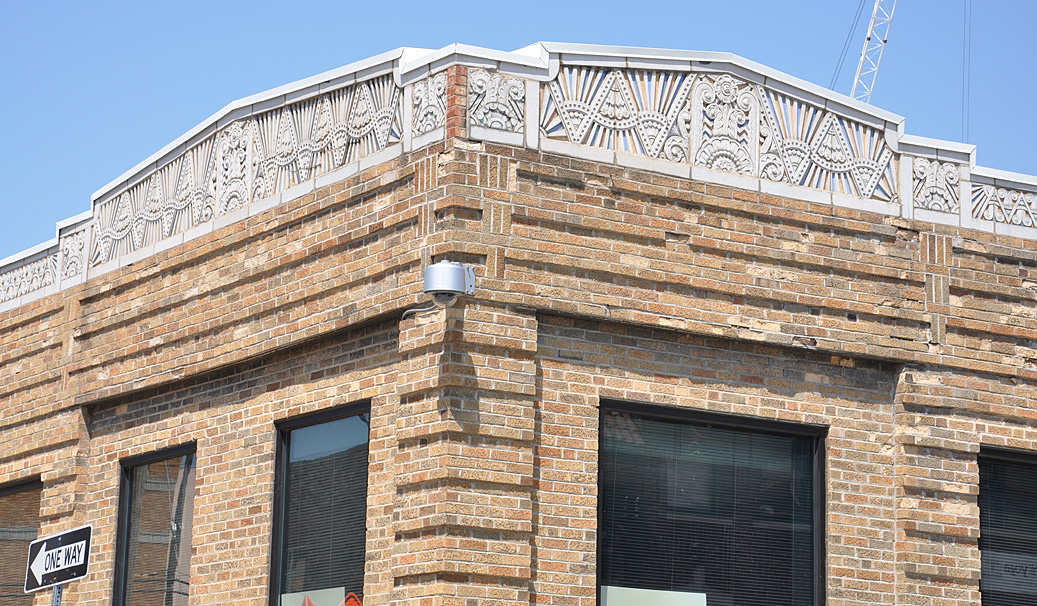 Nice contrasting brick for this sign — which must’ve been repurposed from a previous business.  KC-ers — do you have the scoop on this one? 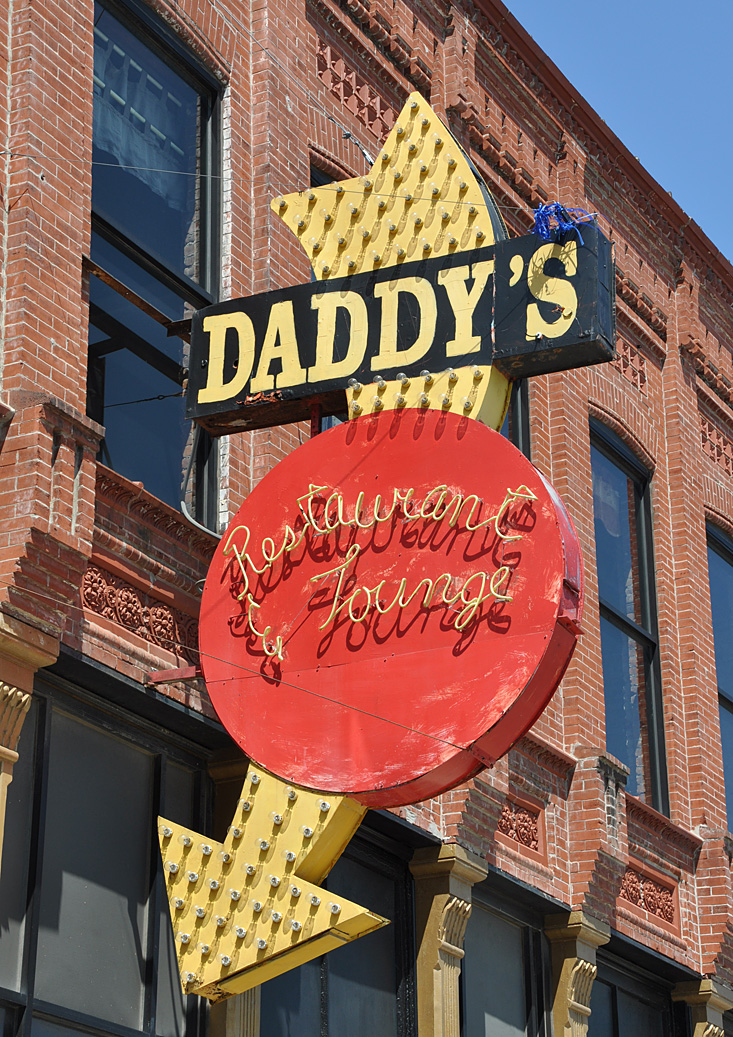 Wonderful towering bank sign.  Can’t remember the last time, if ever, I saw a bank sign this big.  Usually, this style is reserved for shopping centers and the like.  It was a mere 91 here.  I think it peaked around 2pm and this was maybe noon. 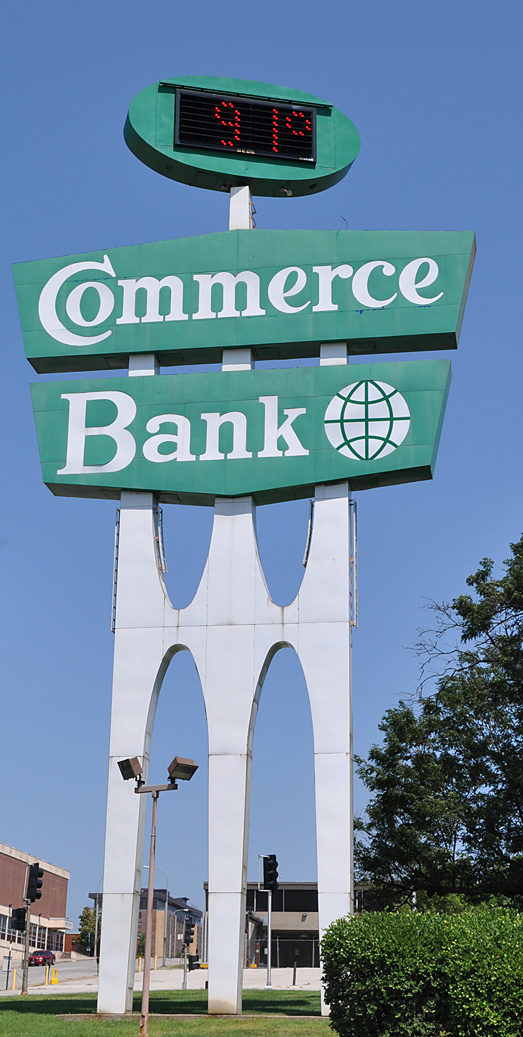 Another mammoth sign (see buckets at the bottom for scale).  It probably looked a heckuva lot nicer once upon a time: 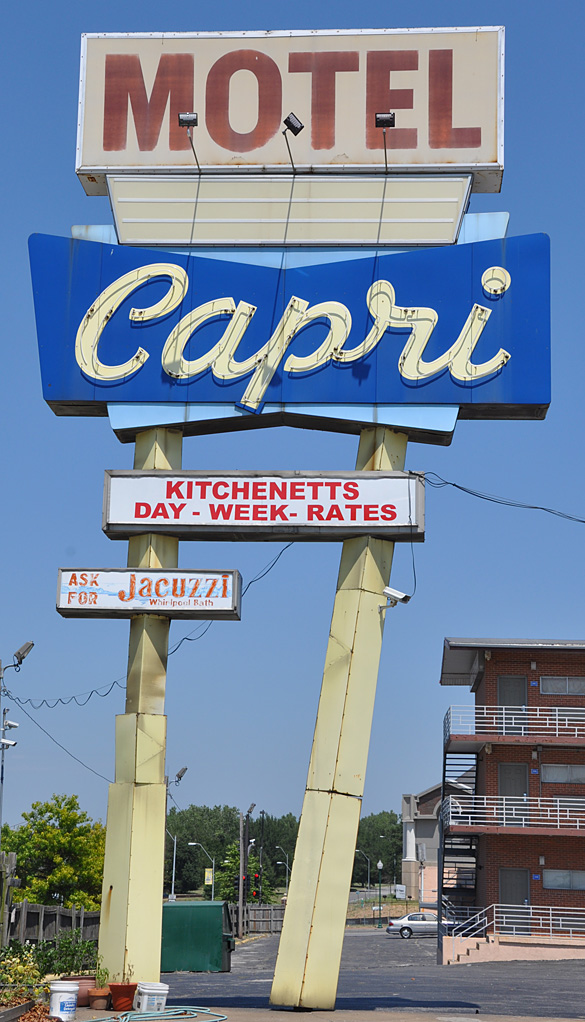 OK — we’ve moved into Kansas City, KS now.  It must be confusing sometimes mixing up the cities/states.  The KS side is remarkably poorer.  I don’t think Texarkana TX vs. OK is that much of a noticeable shift in economics.  But I guess this Missouri River is a bigger separator. 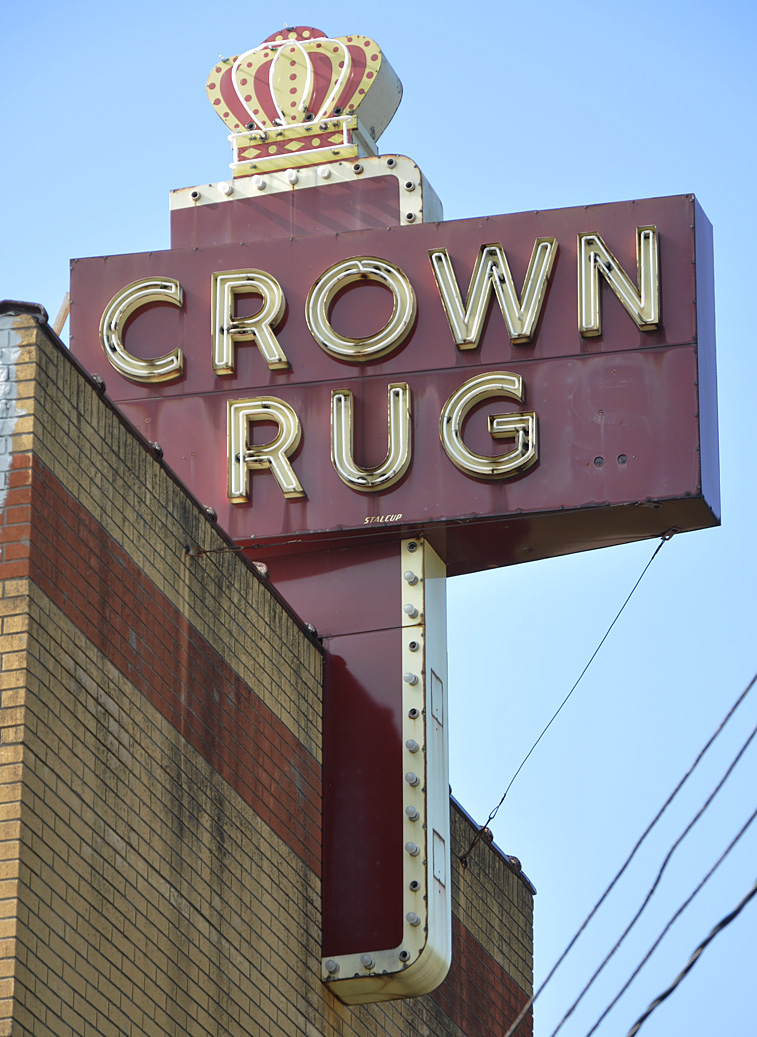 Next door to the Crown Rug is this crinkled-up sign for my rusty crusty fans: 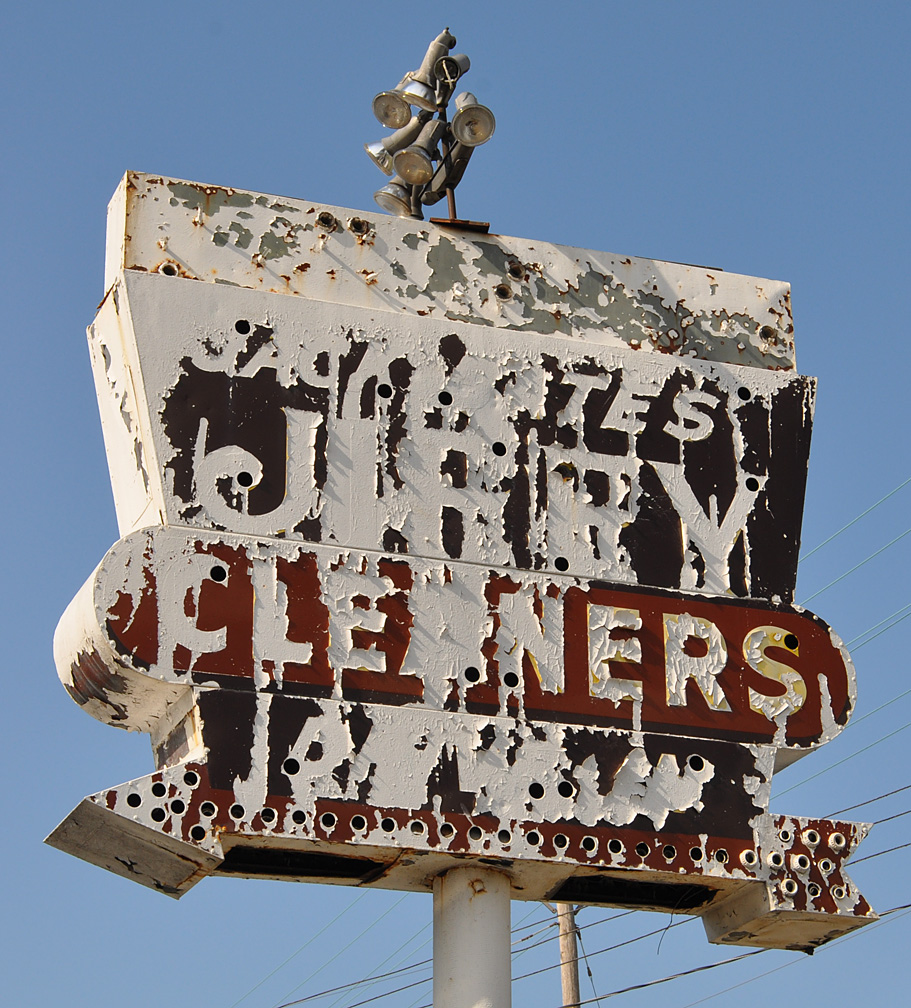 Still in KS City, KS — love this advertising.  Who knew there were so many different kinds of wigs? (note to newbies to my blog – you can click on the photos for bigger sizes) 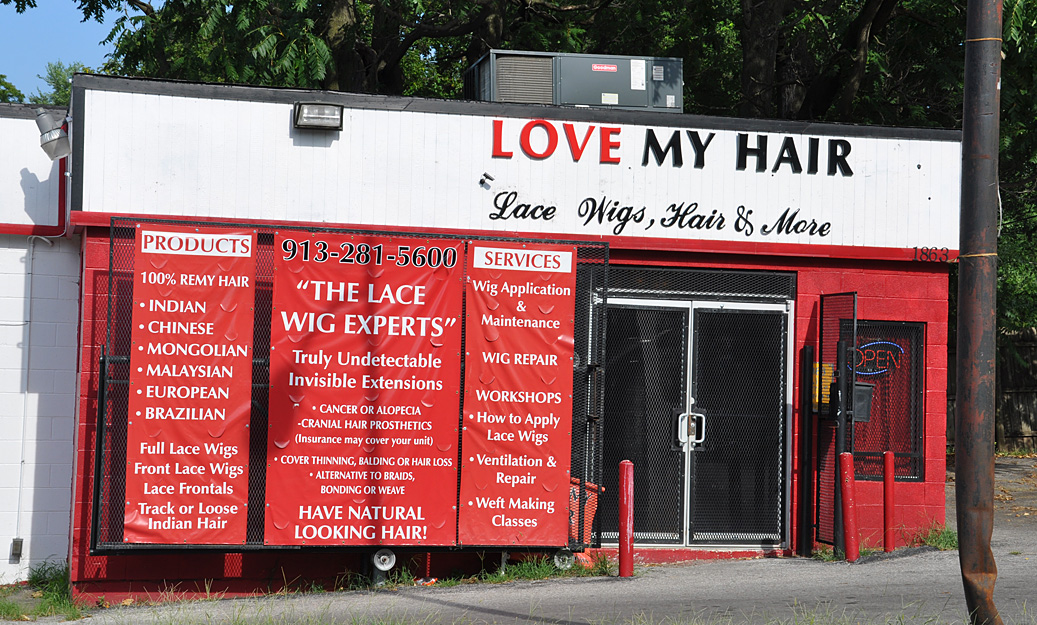 Near the Kansas Speedway — the T-Rex Cafe was on my list — but I had to steel myself since it’s in a MALL!  I stay far away from those places but sometimes, you have no  choice.  The outside of the place was intriguing and revolting in an overly commercial way but I gave it a go.  I do love dinosaurs. 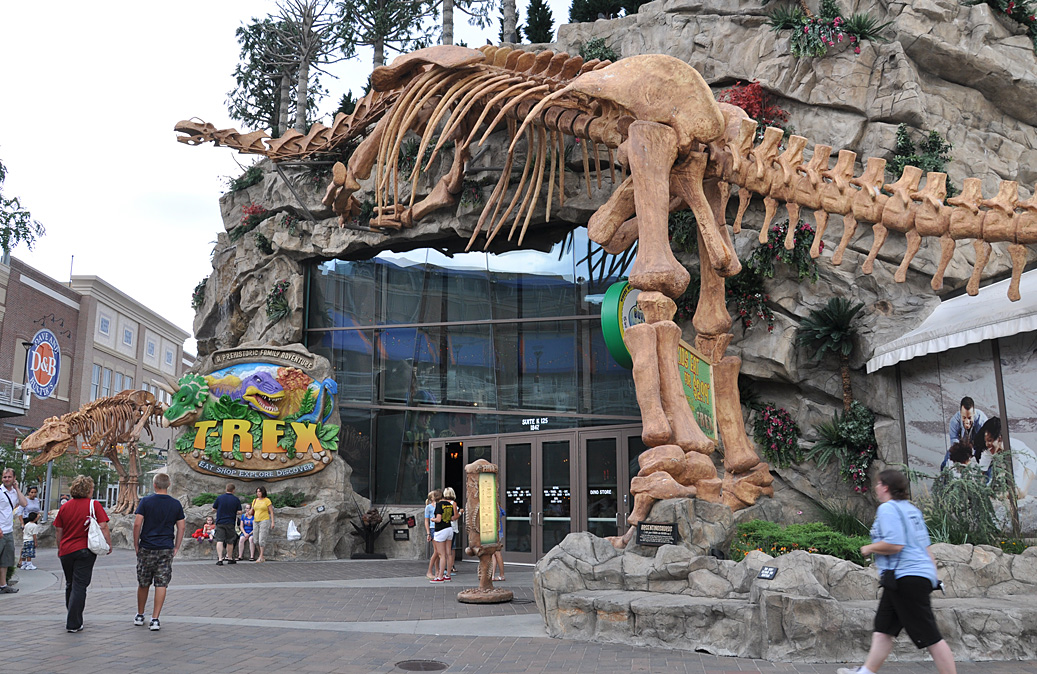 But once I was inside, I really got in the spirit.   There’s this animatronic, rubbery necked guy to greet you right when you go in: 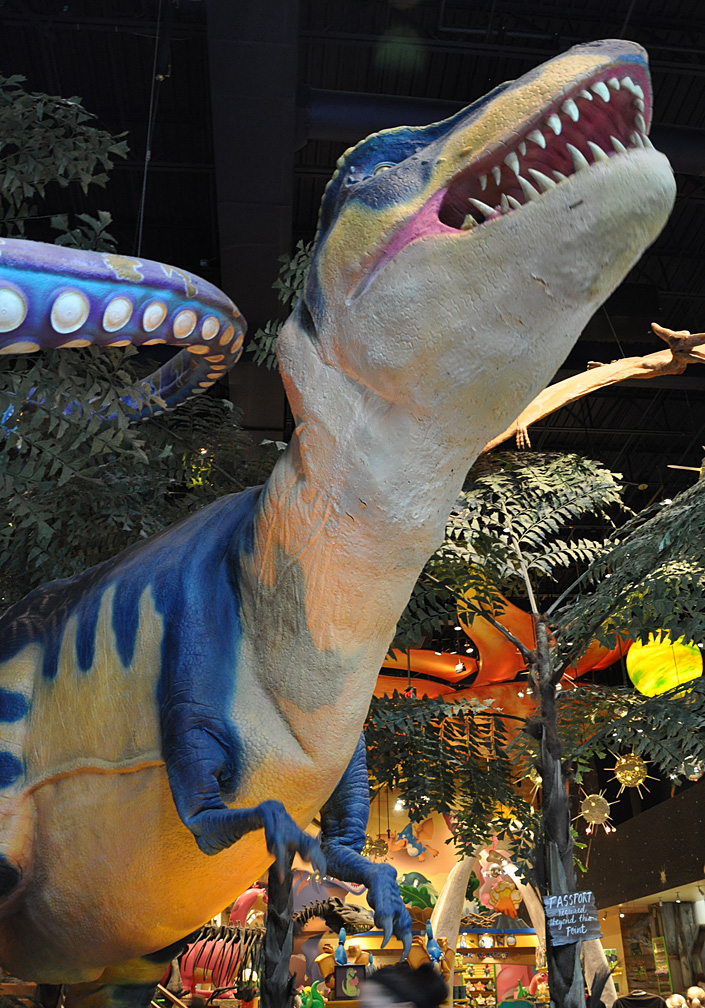 To the left is an awesome bar with a giant squid and jellyfish (?) lights and fish tanks: 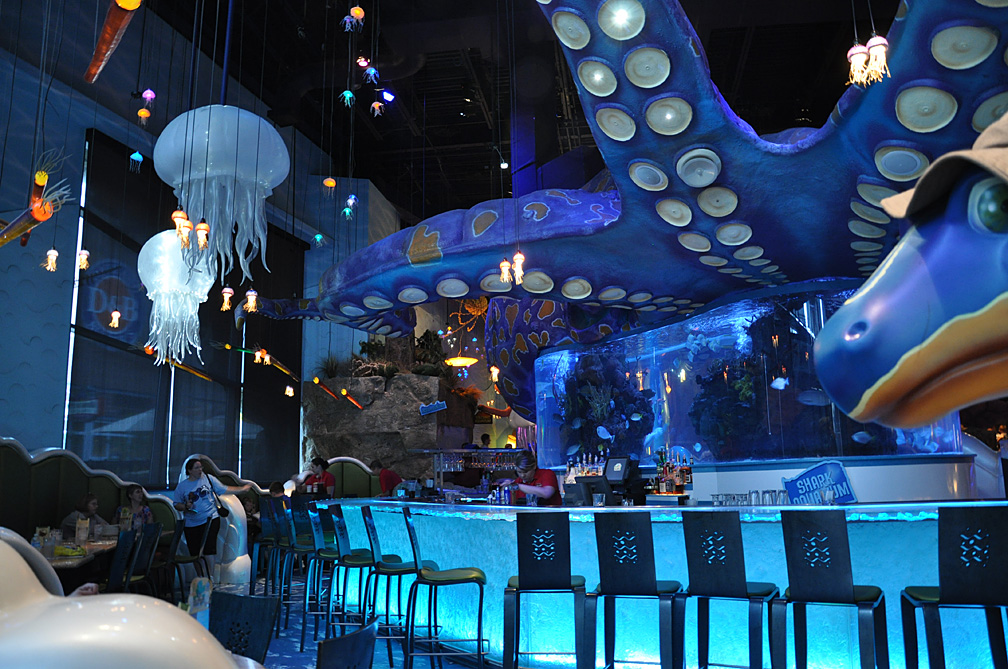 Up the stairs on the way to the bathroom, I passed the Ice Cave: 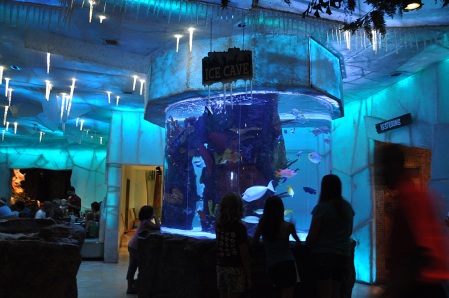 Regular folks having dinner amidst the dinos.  It’s a little too family-oriented for me.  I’m not that into children — esp. on the rare times that I eat at a restaurant.  Not that I would have on this trip.  OK, so I don’t like kids (actually, they’re okay, just not crazy about them) and I don’t believe in God.  Have I lost have my blog audience now?

On to Bonner Springs where I’m calling it a night.  I went to this place to see & shoot a giant chicken.  It was closed but luckily the chicken was in the yard so I still got my photo.  Little did I know that the place had lots of mcm (mid-century modern) touches — the cool sign: 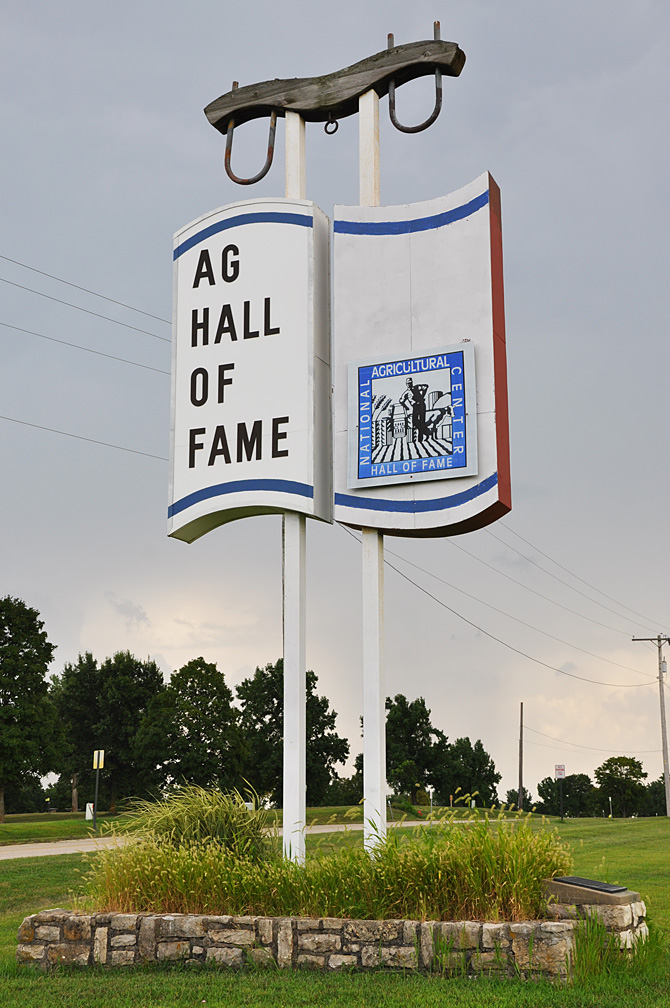 OK — one more for you sign lovers — also from Bonner Springs.  The building itself is not that special but this sign is a winner: 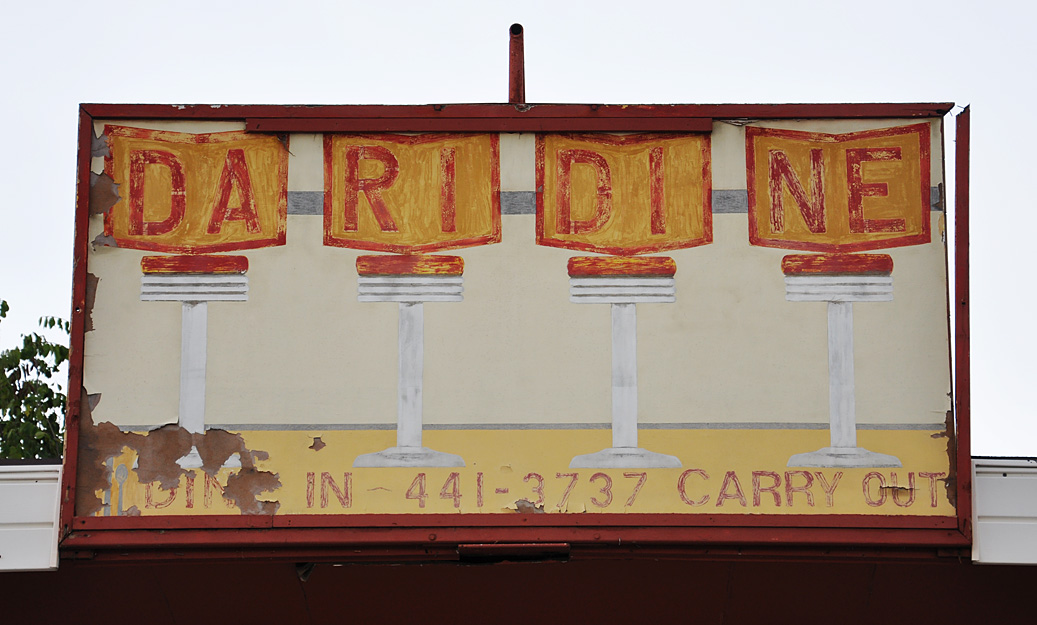