Great distances today but still about a day’s worth of stuff to do in Indiana.  I could just cut and run and stay on schedule by heading for Chicago.  But I’m a finisher.  It just means Kentucky stops and maybe southern OH will have to wait til another time.

There were some truly fatigued moments today.   My usual gum, coffee, radio routine wasn’t helping.  But stopping to let the dogs run seems to always perk me up.  The adrenalin of worrying that one of them will disappear I suppose.  I’ve lost one leash, one collar, and one ball already and it’s not even a week on the road — but luckily haven’t lost any dogs!  Extra leashes and lots of toys so that’s no problem — but Grem will have to wear one of the other dog’s collars since she’s the most wayward of them all.

Sparkle’s been running great but in the last hour today, starting making a little noise.  Kind of a humming but then it goes away.  Running just fine otherwise.  Watching all the needles closely and obsessing about the sound.  I’m pretty stressed but I’ll just have to see how it goes in the morning.  I’ll be close to big cities for most of the day.  And if I break down on a Saturday, that’s better than trying to find a mechanic on a Sunday.  But hopefully, it won’t come to that.  But with four weeks to go, it must be something, right?

On with the show so I can hopefully get in bed by midnight.  That would be great.  But I’m in Lafayette and I can think of a few signs that I’d love to shoot at night.  Pictures or sleep — that’s a big dilemma.

Also from Columbus — which is big on mid-century buildings.  So much so, that many of their newer buildings are built in the same style.  Therefore, I’m not sure how old this fire station is. My guess is that it’s new — but it could be updated:

Hidden safely from the sun by trees — how does a sign like this get so cruddy looking?  From Greencastle:

Nary a palm tree in Indiana — except for maybe this one in Brazil: 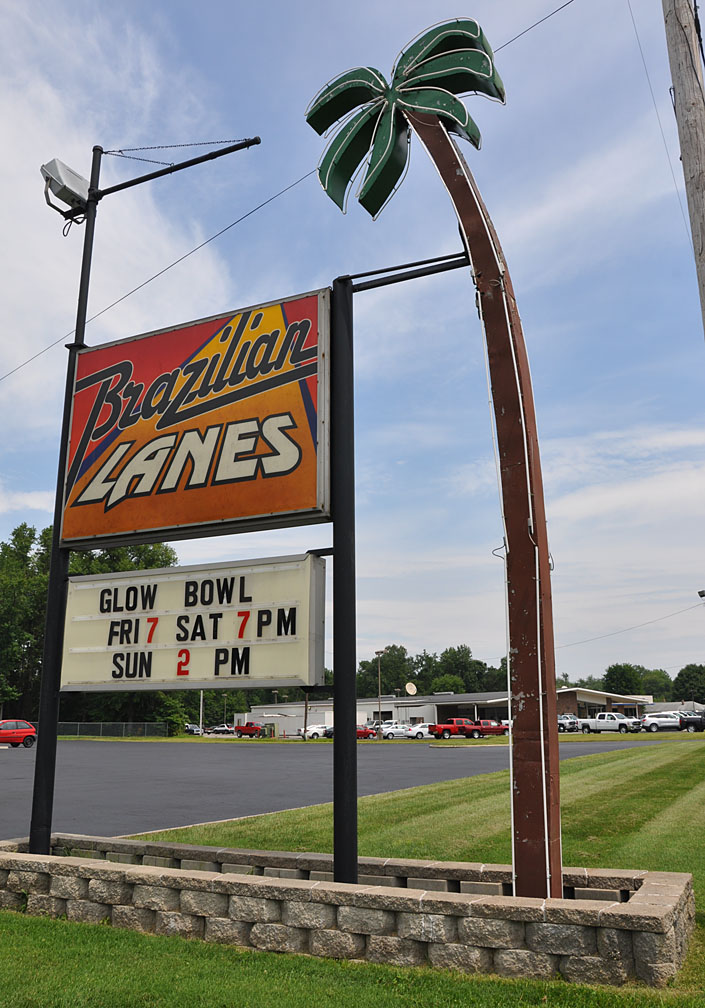 In Terre Haute — this Phillips 66 sign hangs on despite the missing pumps and the conversion into a tire shop.  For now.  Seems the property is for sale and usually that means these signs don’t survive the makeover if things go upscale.

A typical doggie pit stop.  Road goes over bridge = dogs see water & go nuts.  Mom finds a quiet & safe spot.  10 minutes to get them wet, pee & poop, chase some toys and we’re back at  it.  This was in Paris  – the nicer beach is on the other side of the bridge.  But we were quite happy here.  Only one dead fish.

When I pulled into this lakefront spot, there was a rusty/crusty neon sign waiting for me.  I took it as a sign that this was a good spot to take a break.  Now how does a porcelain enamel sign get to this point?  Did someone throw acid on it?

This sign in Danville, IL is of a similar style & era and holding up just fine.  Yes, we scooted across the border for some Illinois towns that were right on the border:

The route took us right past Riggen’s Frostop (root beer stand) in Chrisman, IL which was recently pretty much destroyed by fire a month ago.  This charred root beer barrel is a heartbreaking sight.  However, they’re already rebuilding.

A shortie post tonight so I can get some snoozing in.  This last photo is from Danville, IL.  Pretty sign, pretty building, still in business:

7 thoughts on “Day 7: Pushing thru Indiana”