First some interesting (I hope) stats and notes.  Sparkle now has 243,429 miles on her.  I logged 13,429 miles on this month-long trip.  There were 52 visits to the pump costing $2,228 for gas alone.  The only mechanical glitch was the “key thing” (trouble getting the key out of the ignition and, towards the end of the trip, tricky to turn the key to start).  Sparkle’s in the shop now to determine if my regular mechanic can fix it or if I need to go to a dealer (which is pain in the butt in NYC).  These Astro vans were built to run and run.  I wouldn’t hesitate to buy another when this one dies but Chevrolet stopped making them in 2005.  Maybe they ran TOO good for Chevy to keep making them?

Other expenses:  I got three tickets on this trip.  I forgot to mention a couple of them in my exhausted delirium.  I did blog about the speeding ticket in MS.  The officer has still not “turned in” the ticket although it’s been 3 weeks.  So I have to keep calling the court back to find out the fee.  He has a year to turn it in.  What a ridiculous system!

I got stopped for “careless driving” in Iowa, LA.  That’s a new one to me!  Better than “reckless driving” I guess.  It was one of those everyday situations where some guy is making a slow, really slow, turn onto a side street on the right.  Like 1 mile per hour.  So you look, and there’s nobody coming from the other direction, no one else around, and you pull over to the left and pass him.  Calmly, carefully, no big deal.  Well, the cop must’ve been up a tree or hiding behind a rock because there was no one else around that I could see on this four lane road.  He said that I used the turn lane to pass.  And I guess that alone is “careless”?  Careless to me implies doing something stupid and somewhat dangerous.  Not at all what I did.  The bill for that one:  an astounding $203.  Unbelievable!

In Lexington, TN, I got another speeding ticket.  I was doing  58 in a 45.  A long straight line over a hill, barely urban, the cop must have been way at the bottom with radar gun catching the car after car as they crested the top of the hill.  I was even following someone but he picked me.  Lexington charges a flat rate for speeding of $41 — regardless of how many miles over the speed limit.  Far more fair than the “careless” ticket.

The dogs are zonked.  Strangely quiet and motionless around here.  Nobody gets up when I leave the room.  Here’s a shot from the “house of beds”:

They were thrilled to be back off-leash in Prospect Park this morning.  Although the warm weather we’re having now means Mondays are hell for me (and delightful for them) since there are sloppy picnic-ers’ remains everywhere.  Rib bones, chicken bones, apple cores, banana peels, cake, and other indistinguishable junk all embedded in the acres and acres of grass.  Plus big plastic bags full of food that the parks dept. hasn’t picked up yet.  One poke of a noise and the dogs get an astonishing “sampler”.

OK, on with the last day’s photos.  Just a few since all I did was finish up Louisville and then hit the interstate.  I have a LOT of eastern KY and TN to do at some point.  Hopefully, I can sneak in some KY into this summer’s trip and then the TN into next year’s spring trip.

How about a farewell batch of signs from Louisville: 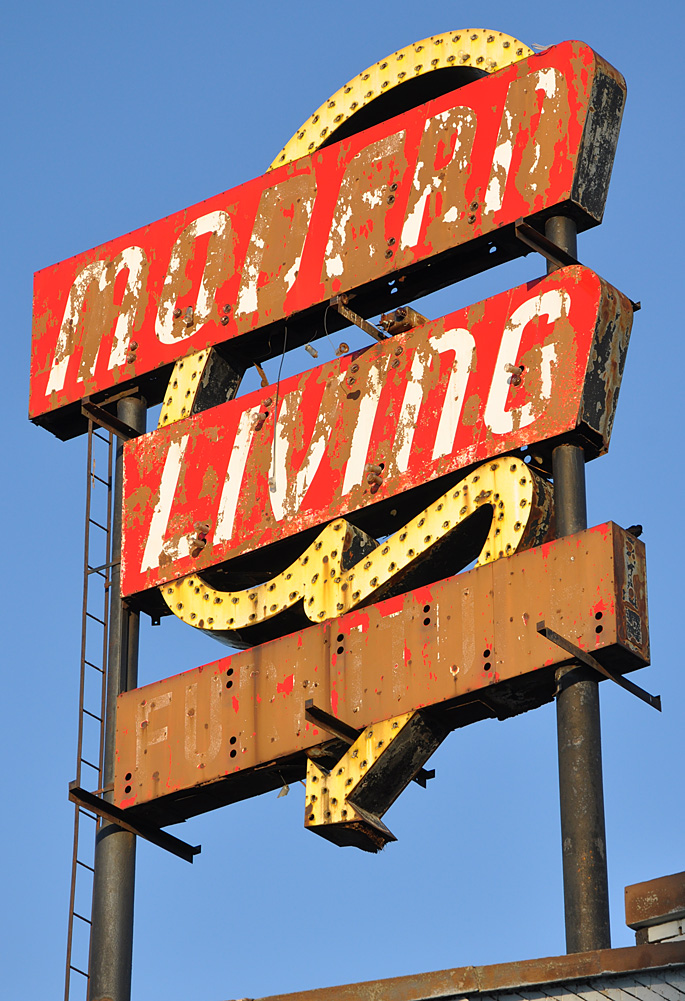 One of the most beautiful days of the trip to be taking photos and it was KILLING me that I had to hop on the interstate at 10am to get home by midnight:

More fluffy clouds in this combo shot.  These photos were taken near Churchill Downs — an area big on liquor and horses: 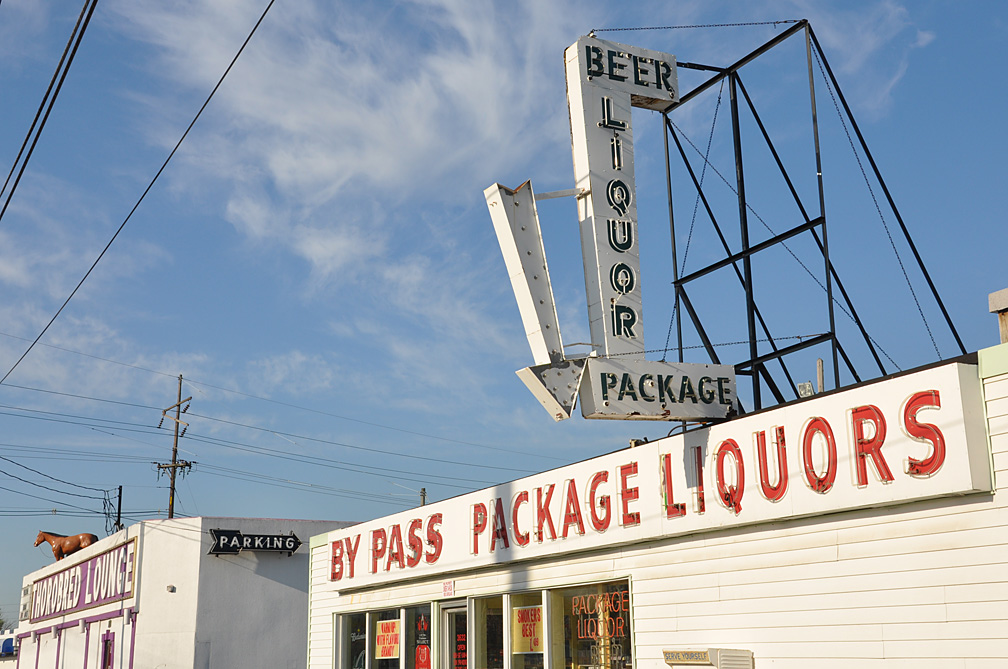 And one more fun one — perhaps this place had a more exciting name originally like “Atomic Cleaners”:

So, that’s it for this trip.  I hope to meet up with you all again for another month-long trip starting July 24.  The dogs and I will be taking on the Midwest — focusing on MO & KS but there will be lots of other states as well.  I’ll be flickring and blogging nightly for that trip, too.  There may be a few posts between now and then.   But mostly I’ll be hunkering down to get several thousands photos into the website and working my butt off to pay for these trips.  Thanks for sharing the journey!