Cloudless, perfect weather today.  Lots of very pretty photos.  70-something degrees.  Founds lots of big lots for the dogs.  I’m thinking about finding them a lake or slow-moving river tomorrow.  Sparkle keeps on chugging without a hitch.  Although the key acted weird again today once.  I just slowly moved the gear shift from drive to park and then the key came out fine.  Hmmm.  Tomorrow, it’ll be time for a quick pit stop at Jiffy Lube as we’ll reach the first 3,000 mile milestone of this trip.

So, it’s time to catch up after taking last night off.  I just uploaded the double batch to Flickr and feeling very, very sleepy. So let’s just dive right into the photos.

The Blue Ribbon Diner in Burlington takes some of its styling from “real” diners.  I bet that neon ribbon is pretty at night.  Don’t know why there are no photos of it at Flickr.  There’s another one just like this in Mebane.

This cool dude is at Aim Undercar Specialists in Burlington:

This one also from Burlington: 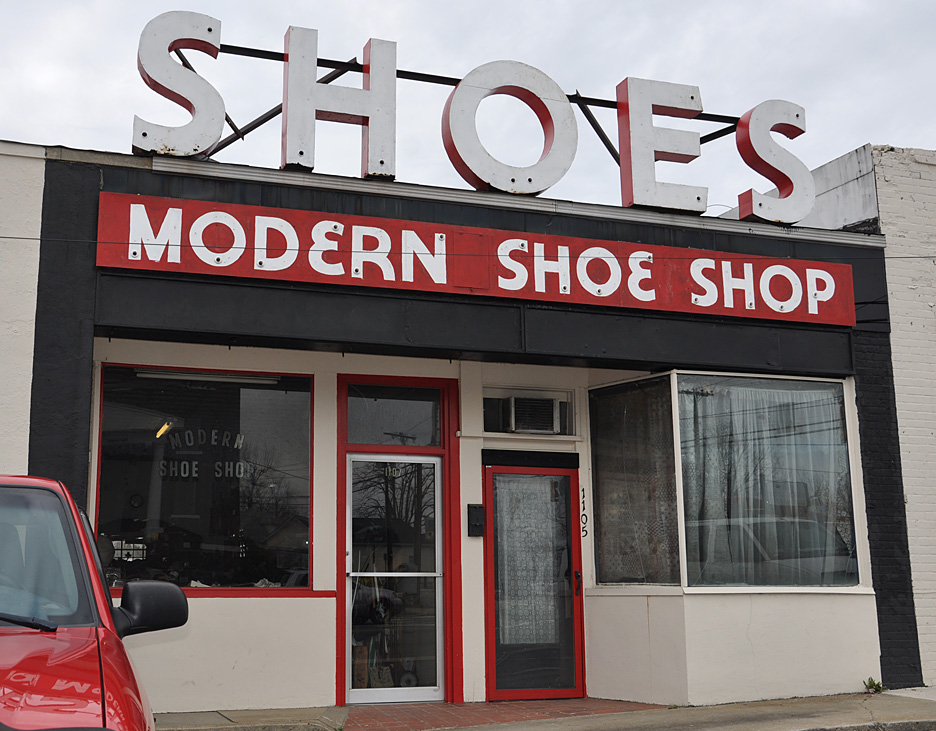 This sign is in Graham – note the “Sealtest Ice Cream” at the bottom.  Yes — still open!: 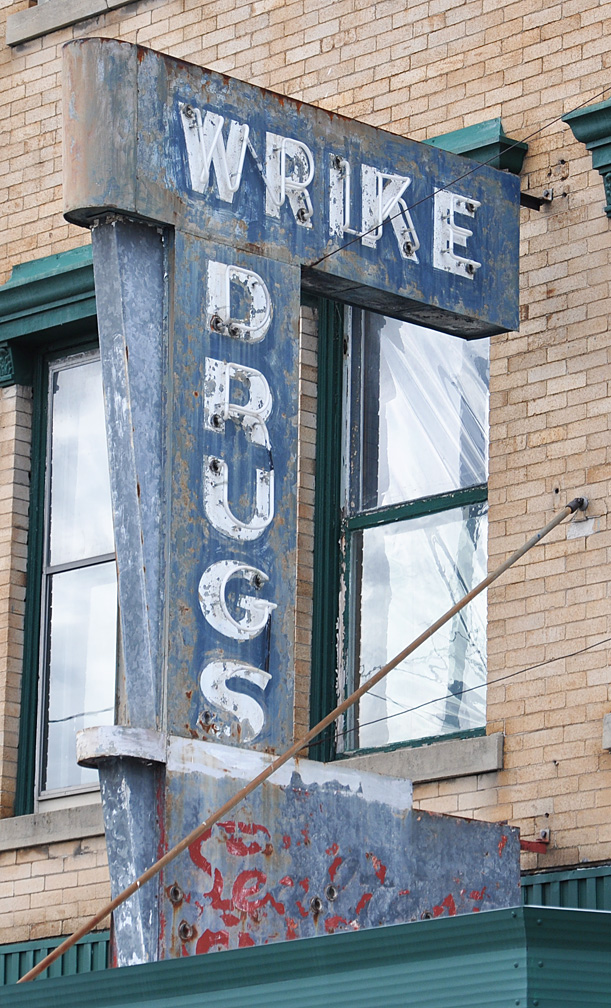 Bringing you blossoms from Raleigh.  Especially for my pals up north where it might even still be raining.  Not sure what kind of blossoms there are but they were pretty as hell and worth getting on my knees for.  The poor tree or shrub had been cut down to about 5 inches tall — yet still had the oomph and audacity to bloom away this spring.  There’s a moral in there somewhere. 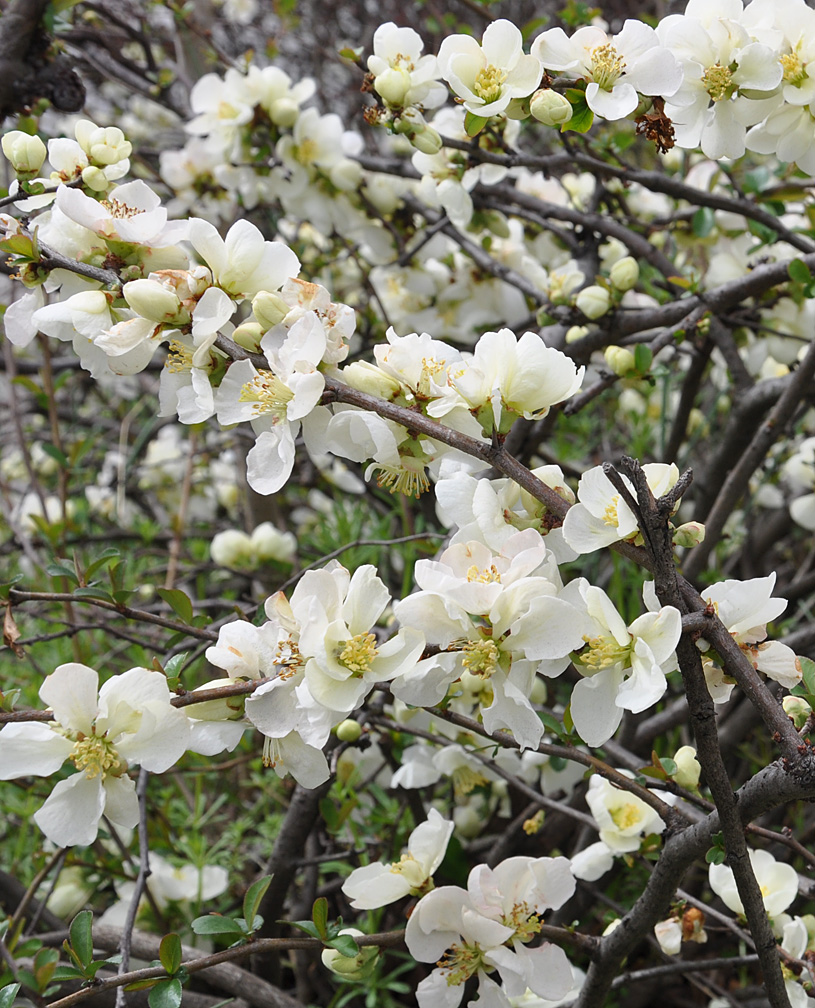 A lot of tobacco pride in Durham:

Quite nice that they left these old painted signs be (Durham):

I had to read every word and try to decipher each bit of food.  But I still don’t get the hand on the right (Durham):

Another pretty oldie – the more patina the better I say! (Durham):

Oh forgot to mention that I found a dog park so they could run their asses off.  And Grem wouldn’t have to wear that collar that weighs as much as she does (well, not quite).  In SW Durham — officially named Durham Dogapalooza — lots of room, big separate areas, and very pretty pine trees:
http://www.dogparkusa.com/north-carolina/durham-dog-park-piney-wood-park

Anyhow, on my way there, I came across this house which made me do a double take since it looks so much like a Pure Oil gas station (the general roof shape, the metal details around the window, the curved top of doorway, and round window in the door, the little lamp).  Heck, maybe this little semi-abandoned building was the inspiration for those hundreds (thousands?) of gas stations (ok, maybe not):
https://roadsidenut.wordpress.com/2010/03/11/name-that-station-1-phillips-66-vs-pure-oil-cottages/ 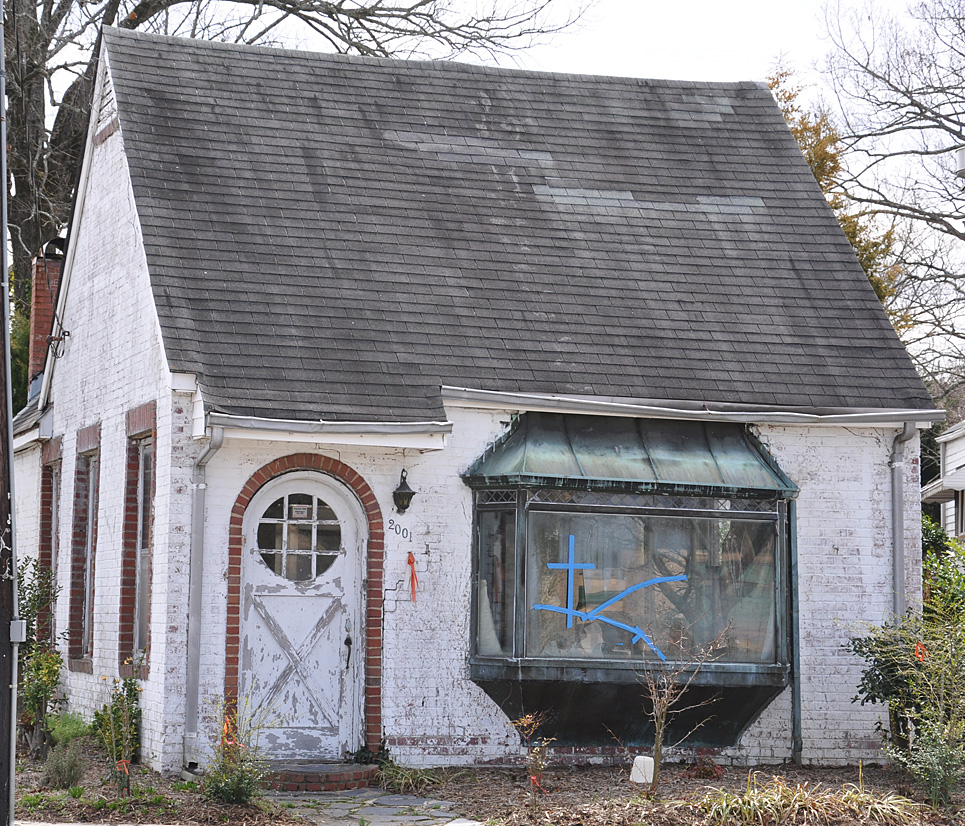 This abandoned Dutch Boys sign in Siler City was one of my last shots of the day on Thursday:

Started the day in Raleigh where I found this IHOP.  It’s maybe the oldest one I have seen with that table leg sign (at least that’s what I call it): 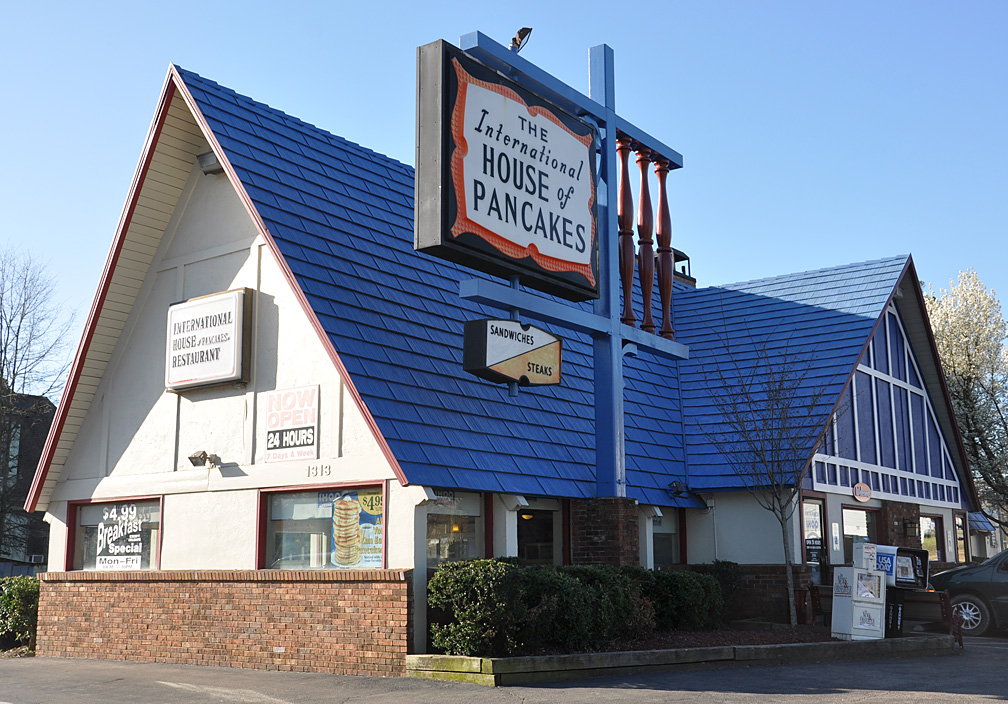 More blossoms.  Very sweet smelling.  Chirping birds all over today.  And a mosquito even found its way into the van at one point.  Is that like an insect groundhog indicating that it’s going to be a short spring?  I hope not! 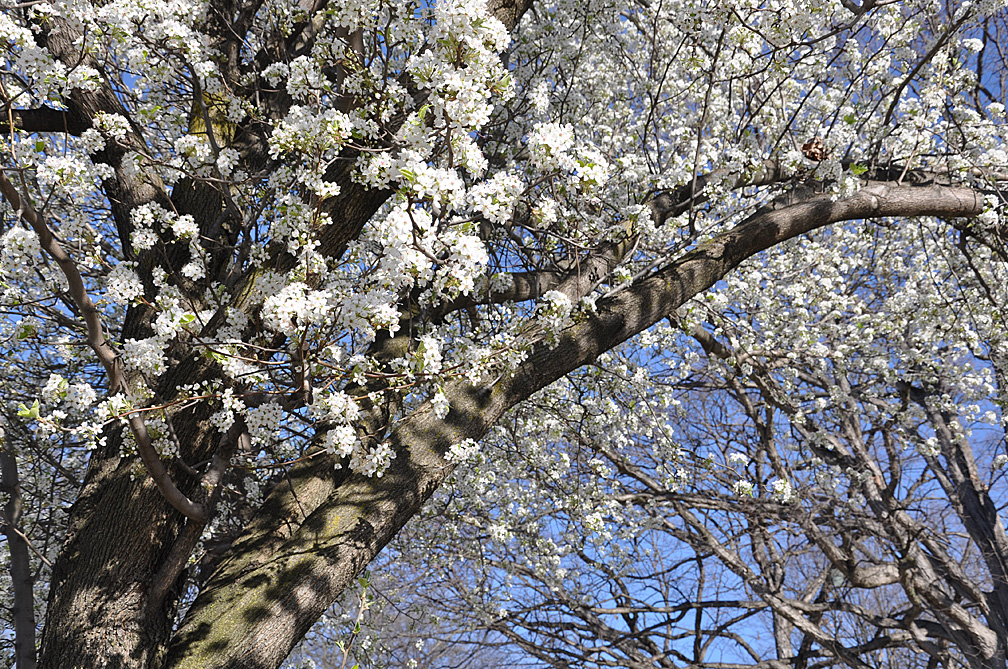 A very old American gas station sign with Amoco pumps in Manson.  The vacant station, not so pretty: 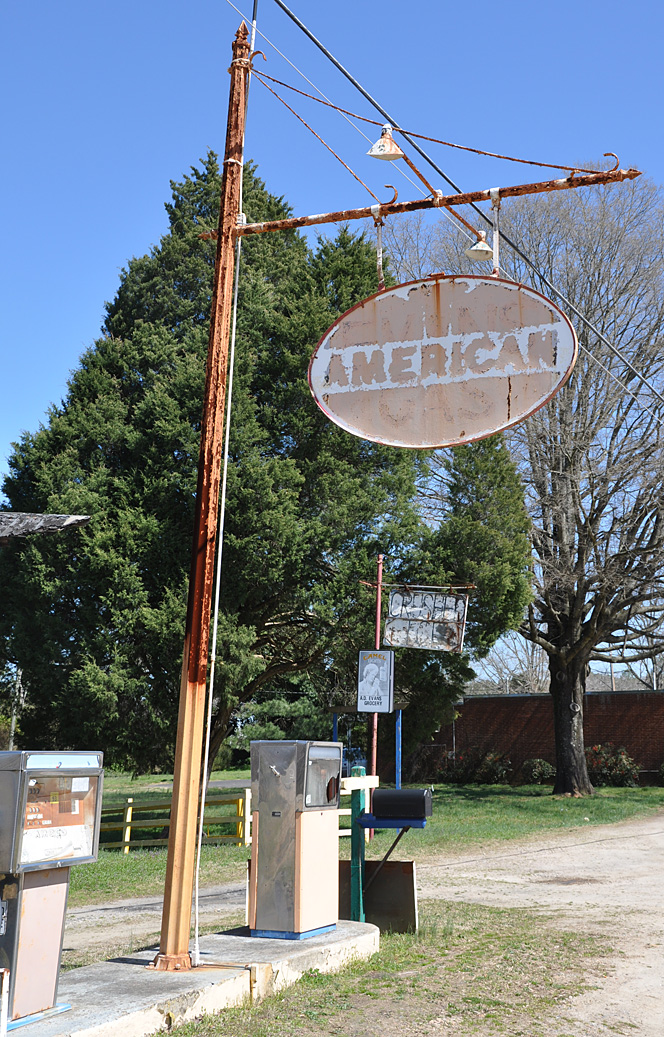 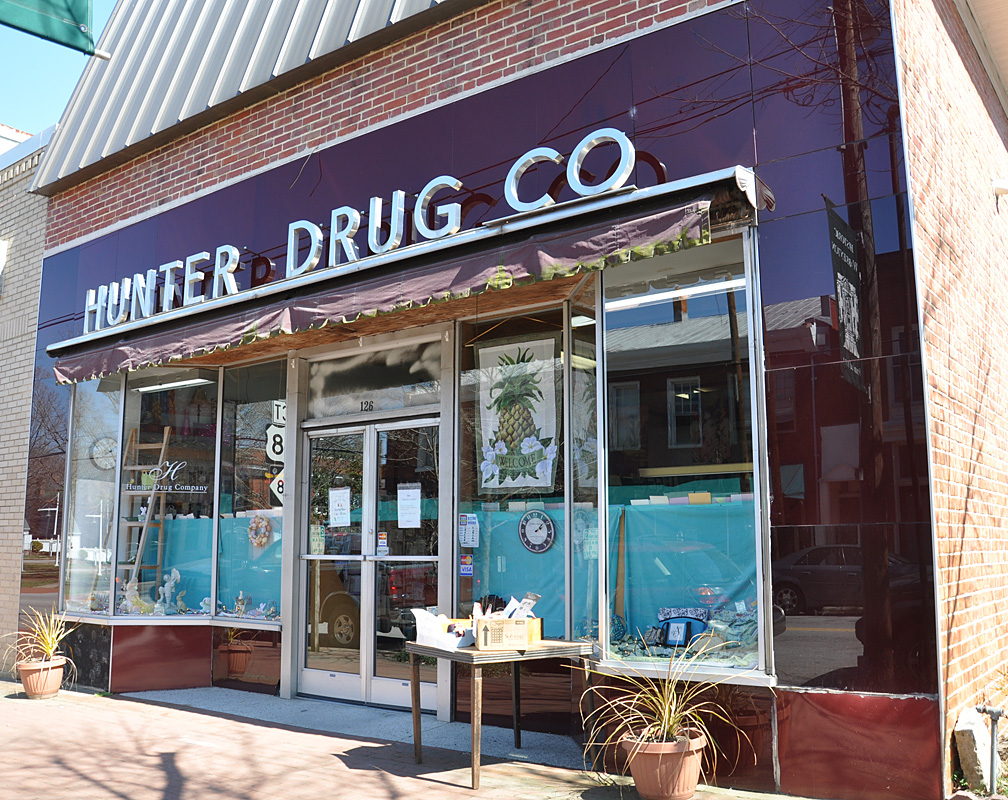 The owner of this place in Elm City told me that this was originally the Southern 500, a truck stop restaurant.  That’s no photographic distortion – the arrow and sign are HUGE:

I’ve seen at least two variations of crazed-looking chef statues that stand in front of restaurants.  But I’ve never seen the creepy fisherman.  This guy is in front of Worrell’s Seafood Restaurant in Wilson:

And finally, I’ll leave you with a couple signs — this old Pure Oil gas station sign in Stantonsburg is extra special because of the little original porcelain light fixtures pointed at the sign: 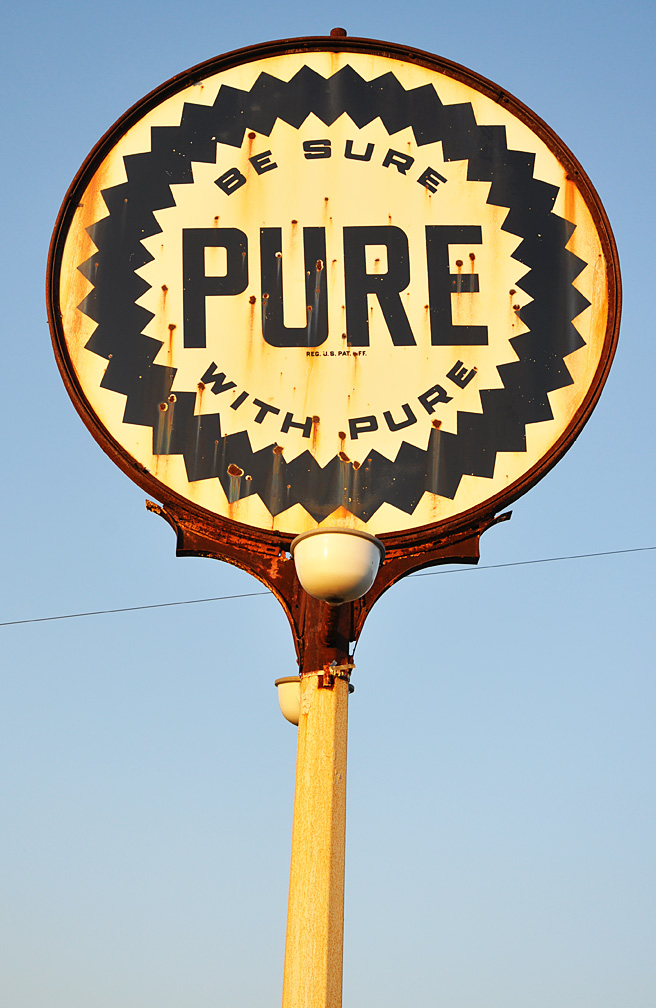 And lastly, this pretty one from Wilson – great shadow-effect painting and subtle deco-ness: