Today was a real weather challenge.  Sensible people would have just stayed in the hotel and watched movies on HBO or caught up on email.  But since I was three days behind, I had to press on.  I’ll never take the sun for granted again.  I did my best to protect the camera with my shirt and a plastic bin lid.  Then I’d rush back to the van and wipe down whatever drops got on the camera.   At times, I had to pull over because visibility was near zero.  But there were a few good sunny hours and I managed to bang through a good chunk of stops.

Adding to the stress and irritation of weather, I got my first (and hopefully last) speeding ticket of the trip.  Entering the little town of Stonington (population 960), I  must have been distracted with my maps as I never saw him til the lights were flashing behind me.  He had me at 52 in a 35 but kindly knocked it back down a bit.  So this will be a $75-er.  Not a bad price considering how my non-stop speeding for the past 17 days has gotten me umpteen or so more stops per day.  This was definitely a speed trap as when I was coming back the other direction, I saw the same guy giving some other sucker a ticket.  I figure at a minimum $75 times about 4 per hour, that’s $300 an hour, times 7 hours = $2100 day.  No wonder he had such a huge monster truck type truck instead of the usual police cruiser.  The town probably said he could have whatever he wanted.  Maybe nobody in the town even has to work since he brings in such revenue.  So anyhow, yes, I’ll slow down a bit.  Maybe.  At least in Illinois.

On with the show.  I have long been a fan of the Bear Manufacturing (aka “laughing bear”) signs.  Some examples and history at the bottom of this page:
http://www.agilitynut.com/signs/ca2.html

But this guy in Springfield seemed smaller than usual:

This Hen House restaurant in Springfield is part of what once was a chain.  I’m not sure how old this giant sign is but it might be from the 1970s.  According to an online source, the chain started in 1969 and at one time had 42 locations in five states.

One more sign for today — from Jacksonville.  This sign was massive (as was the Hen House above) but I chopped off the legs to give you more actual sign. 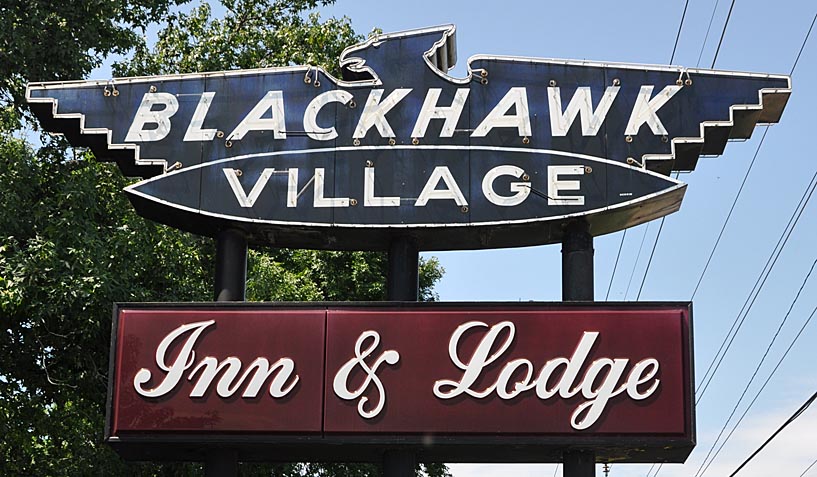 This one from Decatur I forgot to include in my post yesterday.  Three grown men motored up to the liquor store on these bicycles.  I’ve never seen such a thing.  Apparently, they are gasoline powered and somehow set up just like motorcyles.  Although they probably don’t go as fast.

Something else that’s news to me — In Springfield, this clerk-less convenience store.  Well, almost.  Even wheelchair accessible.

Fixie is a female dog so it’s not what you think.  The thunder and lightening and rain had her pretty miserable and in a tail tuck all day.  If she could speak, she’d be “hounding” me with “when are we going home?”s.

Nik, however, when he’s not barking or running around, knows how to relax.  His standard sleep position, looking very leggy.  Even at rest, you can see the double suspension gait which makes him so fast.  I have been futzing around for the past hour trying (without success) to get some videos of him and Grem running around and retrieving today.  Maybe I’ll figure it out tomorrow night.

Today’s dose of Abraham Lincoln — this statue in Taylorville.  This webpage explains the pig:
http://showcase.netins.net/web/creative/lincoln/news/taylorville.htm

Also from Taylorville, the winner of the Ugliest Building of the Day.  And right there on the main square.

Actually, it’s not the building’s fault.  I’m sure it started out just fine, maybe even nice looking, but over the years, one modification led to another I suppose.  Until somebody got a really good deal on shingles.

This building in town also must have had a better appearance initially.  I’m guessing that Lewis was a department or clothes store?  There was already a theatre in this town square.

And Roadsidepictures — this one’s for you.  It may not have a nice neon sign but it sure has it makes up for it in quantity.  Allen runs the Rexall Drug Store group:
http://www.flickr.com/groups/rexalldrugstore/pool/

From Hannibal, MO (yes, I briefly snuck out of Illinois because this city was so close and won’t be as convenient during the Missouri portion of the trip — if there IS a Missouri portion that is, after now being, what, four days behind schedule?).  This is City Hall or some other big deal city building.  Okay, if you can get past the pigeon situation… I ask you:  what the heck is that thing on top?  That round thing that looks like it must light up — and, in my fantasy world, flash on and off in some way. Or are those just some sort of Xmas lights wrapped around the thing — and maybe they too are never lit.

Hannibal is all about Mark Twain — his boyhood home evidently. Coming into town on the interstate there’s this tribute.  Which looks better at 75mph than snatched and frozen in this photo.  Not sure what this “art” is composed of.

But — back to Illinois after this little diversion.  I’m figuring for about three more days.  Then, finally into Iowa.  At least that’s the plan.  Weather permitting.

8 thoughts on “Day 17: Central Illinois in the Rain”