It turned out that I had planned about 100 stops in and around St. Petersburg so I didn’t make as much headway as I thought in moving northward.  Tomorrow, I’ll be tackling Tampa and a bunch of stuff east of there. I’ve only got three more days to play down here — so it’s crunch time! The “panhandle” might have to wait until next year.

The dogs only got one real good run today — at the 17th Street Paw Park in Sarasota. There was a huge area with good fencing for Grem and a kiddie wading pool for Nik. Everybody was pretty quiet and tired today except when we passed water, motorcycles, or other dogs.

Grippie has successfully taught my other dogs her hatred of toll boths and what to do about it. It’s become such a nightmare that I usually just quickly park & about 4 feet from the booth and hop out to pay. The toll booth collectors get all angry with me but it’s really a safety issue at this point. Grip knows the second I put my hand in my pocket for money. She looks down the road and at my hand and down the road. Then she starts barking and wakes everybody else up for group mayhem. I’ve tried putting the money on the dash a mile away but she keeps one eye open and the second I touch the money, she lets loose. I stick my arms way, way out of the van because I fear Grip will bite the person if I’m not ultra careful. Most states accept E-Z Pass now so I don’t have this problem anymore. But I don’t think FL’s SunPass is compatible. Here’s Grip getting warmed for a toll booth: 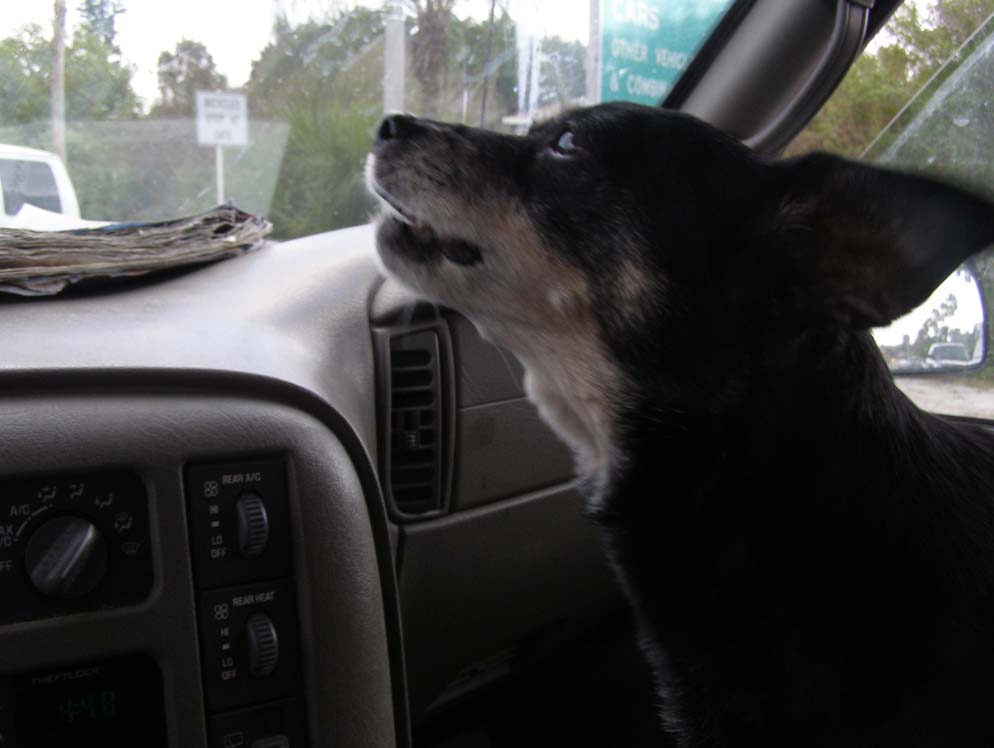 I’m not sure if this building in Sarasota is “real” (vintage) or “retro” (built much more recently to look old): 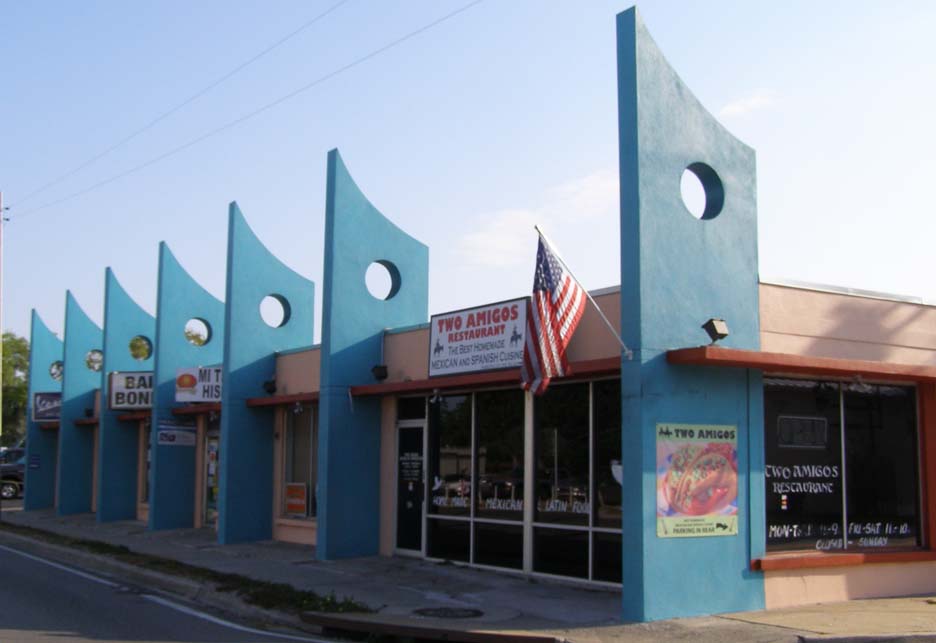 I do know that the Selby Public Library in Sarasota was built in 1998.  This round building was designed by Eugene Aubry. It reminds me of a couple of F.L. Wright buildings. 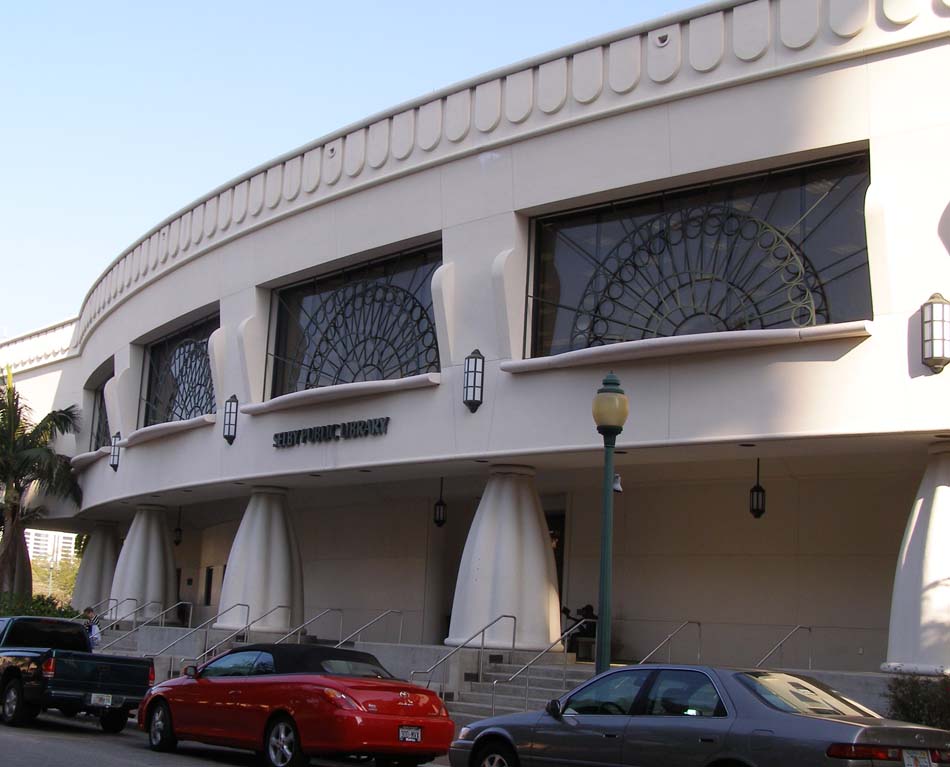 I was saddened to find a couple great signs (e.g., the Sunset Terrace Motel) and Mel’s Twistee Treat are now gone from Highway 41 north of Sarasota. This sign and building probably won’t be around much longer either. 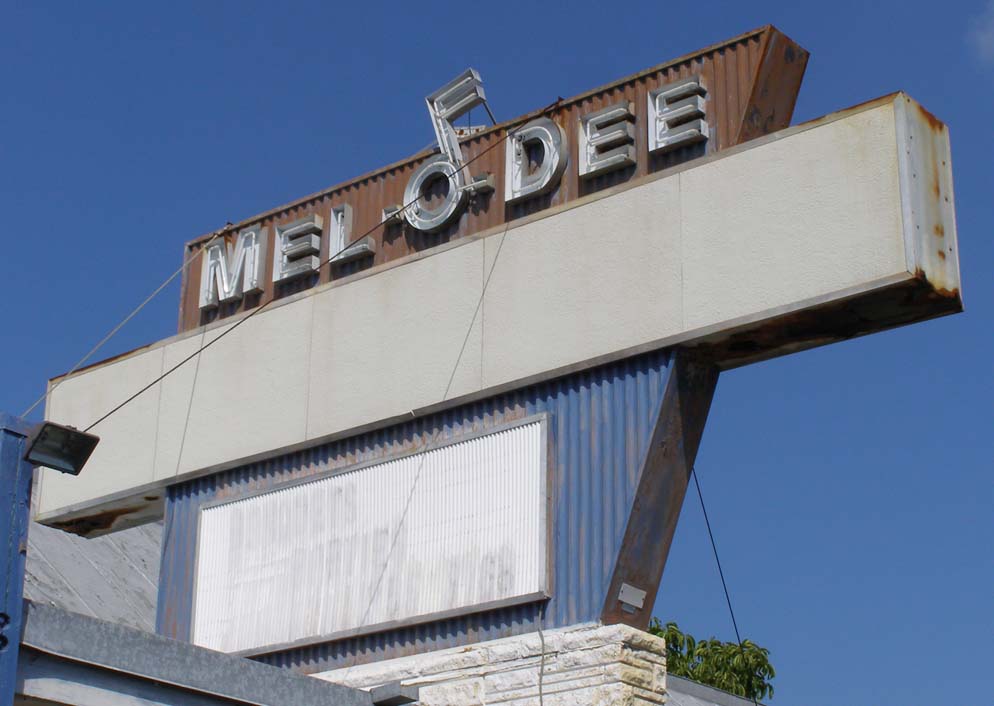 In fact, not just in your town or your state, but everywhere across America, strip malls just like this one are popping up.  I really find the aesthetics of this mini Main Street so offensive! 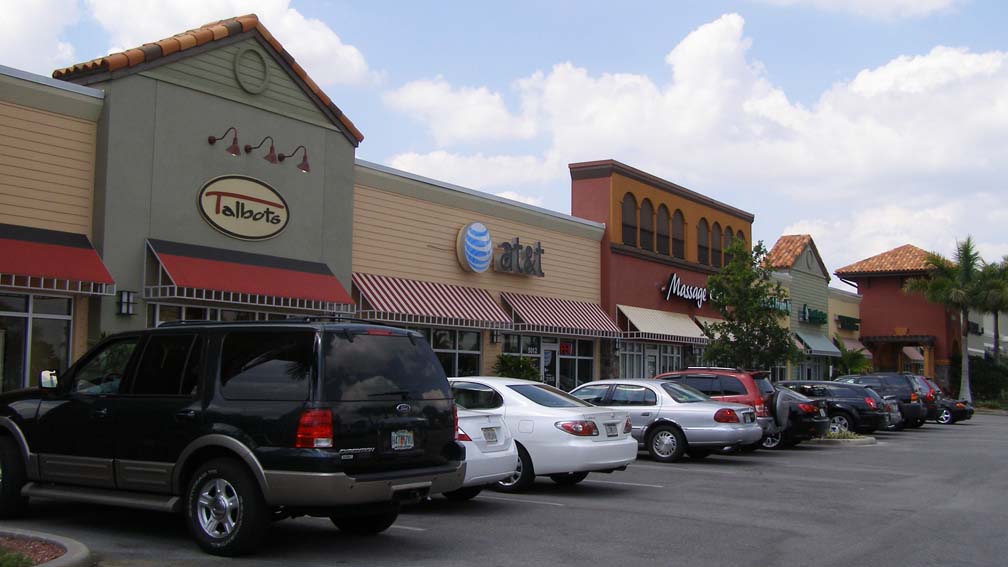 This building in St. Petersburg is not my era — but its details called to me.  It is known as the Snell Arcade. 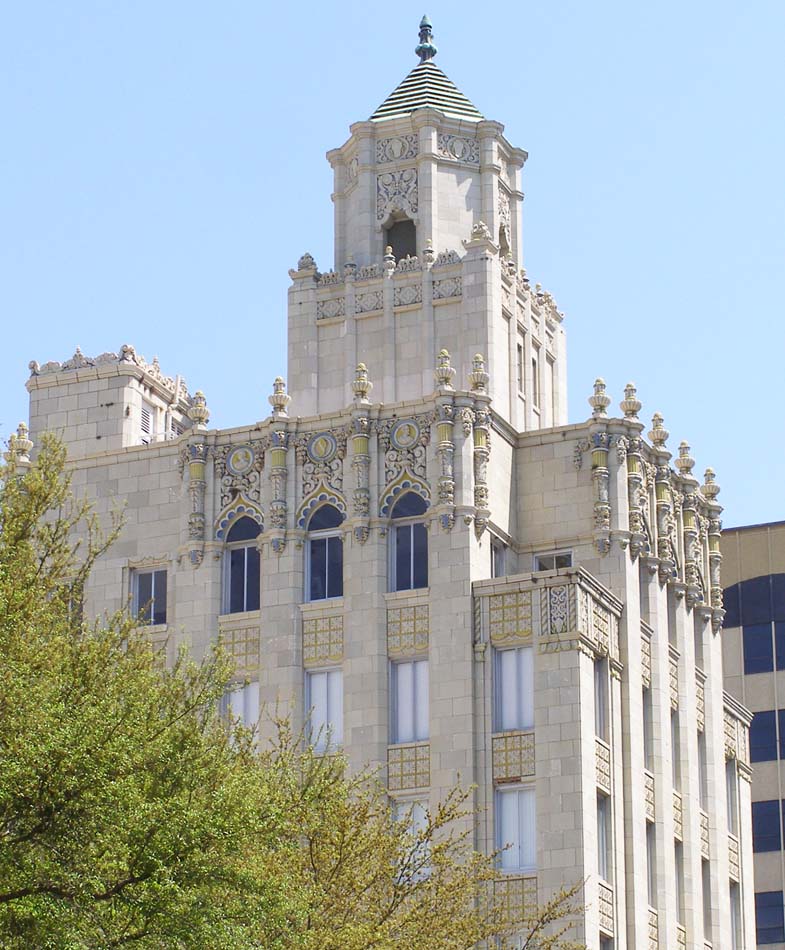 This appears to be an adapted sign in St. Petersburg.  Does anyone know what it originally advertised?

As I understand it, this place in St. Petersburg used to have gas pumps out front as well.  It has been here since 1946 and is still in operation.  I’m mostly keen on this place because of their clock which is quite large and still works. 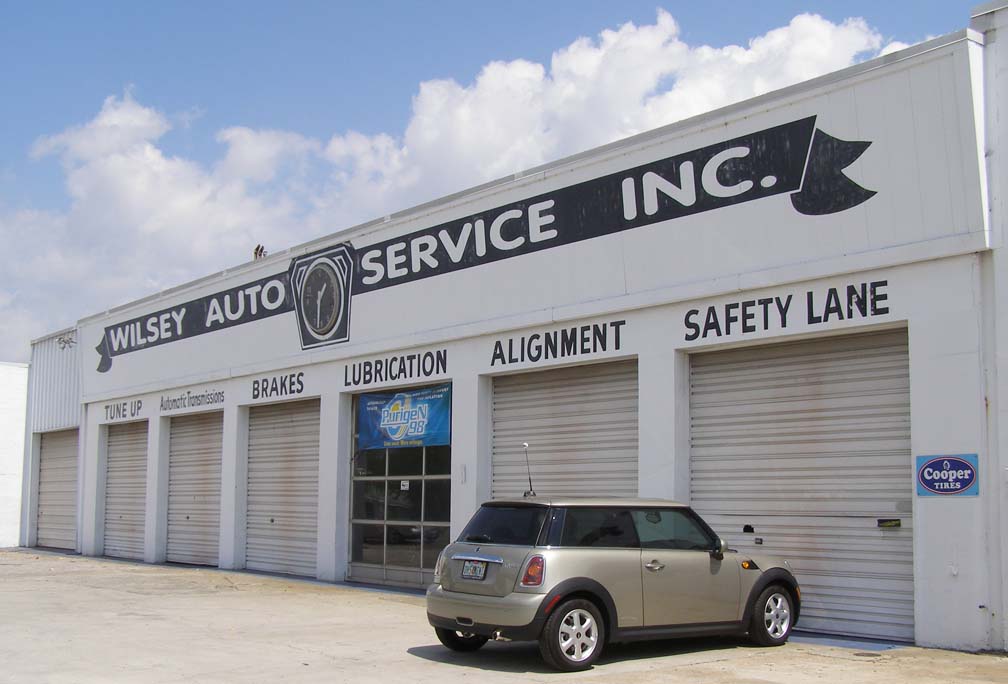 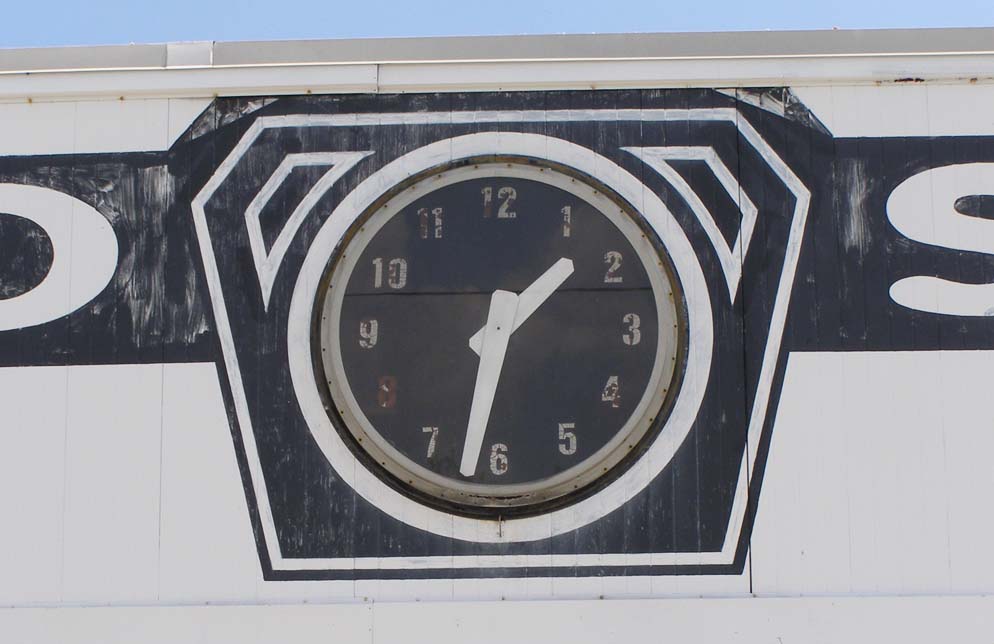 Okay — calling all local St. Petersburgians and/or chain experts — what might this building have been used for originally?  It looks like a Tastee-Freez or Dairy Queen — but those wings on the sides don’t look quite right.  Then there are the garage bays — which could have been added later I suppose.

Speaking of fast food chains, how about a purple former Burger Chef — from St. Petersburg:

For those of you that don’t know it, I write the Sign Lines column for the SCA (Society for Commercial Archaeology) Journal.  For the next issue that’s coming out, I wrote about neon plumbing signs. A number of them included animated dripping faucets so I was thrilled to come across this little guy in St. Petersburg even though he’s modern and plastic.  I’m glad to see the sign tradition continues. 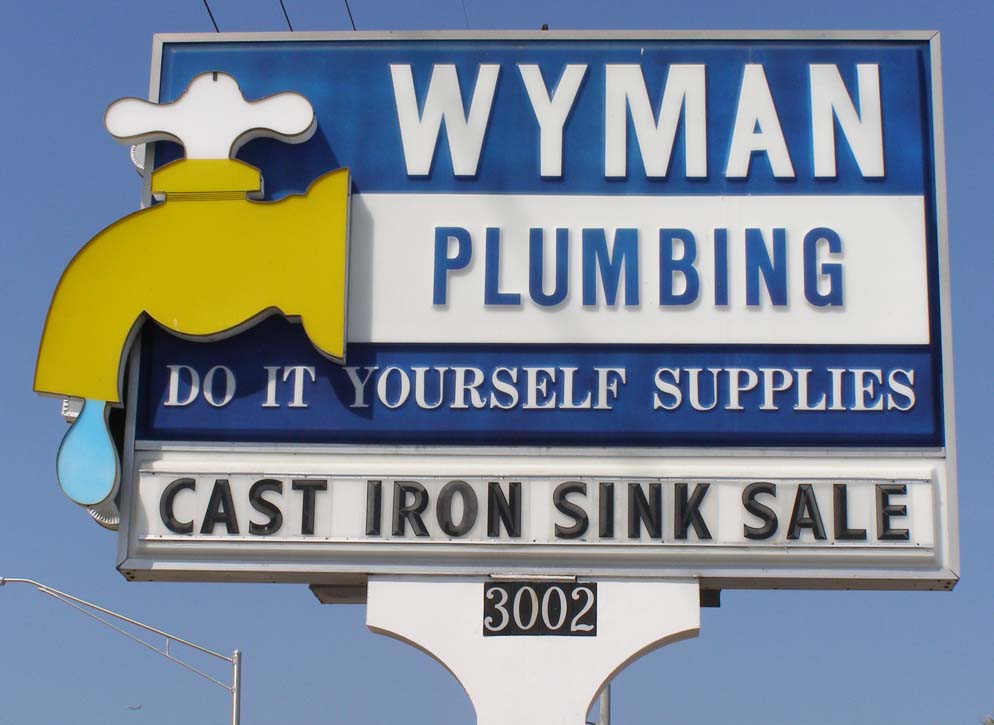 While I was shooting some photos at the Polynesian Putter mini golf course in St. Petersburg Beach, I noticed this guy hanging around.  He was not in the parking lot but actually strolling about the course.  I’m not sure if he’s a regular or gets any handouts but he’s sure different from the pigeons and seagulls that I’m used to seeing in public places.  I believe he’s a white heron.  I hope someone will correct me if I’m wrong! 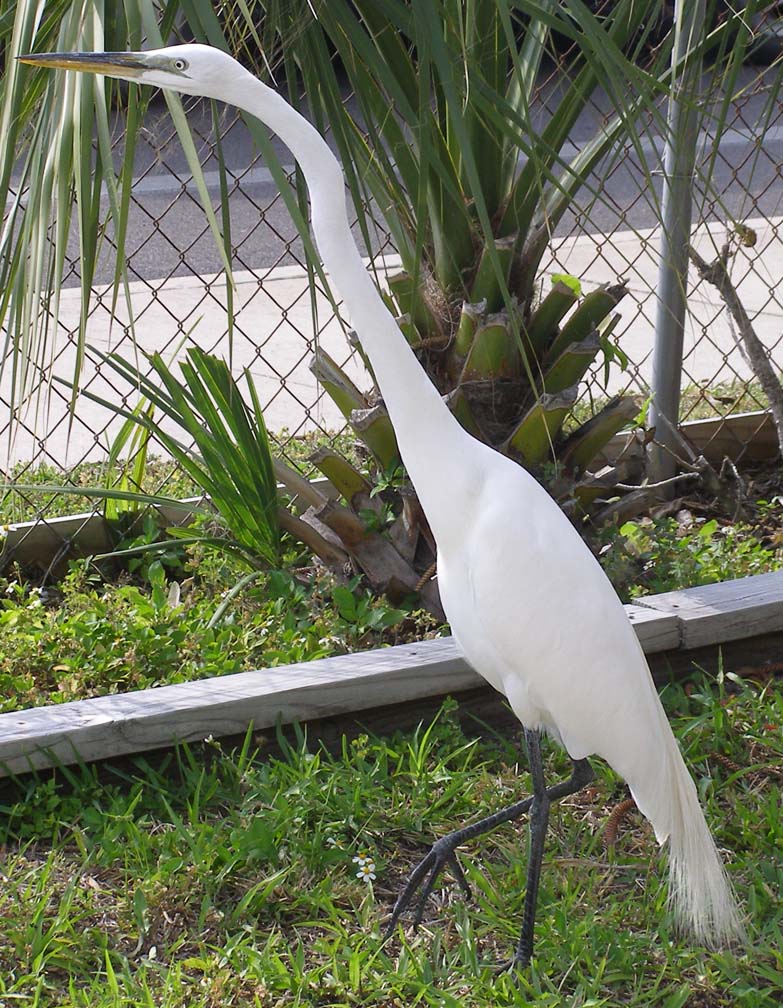 This place in Pinellas Park had me doing a vigorous U-turn over several lanes of traffic.  It’s now a security business.  Google Maps shows the building painted white and for sale.  Does anyone know what was here before to which we can attribute these statues? 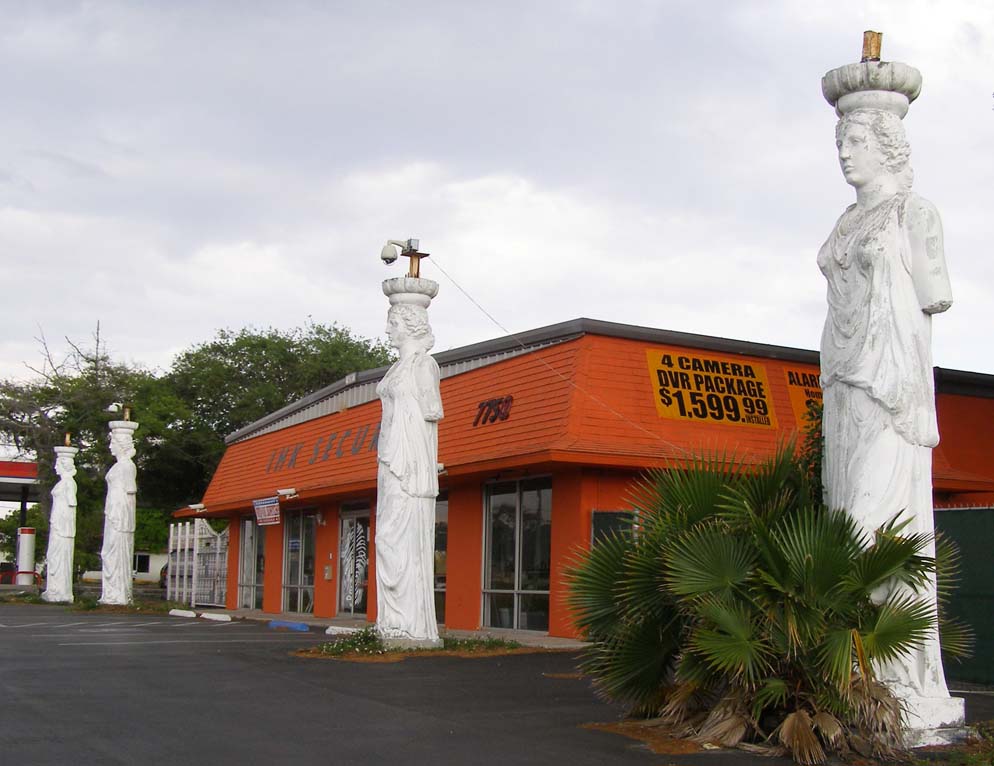 This car/boat amalgamation is parked in front of Mahuffers (restaurant/bar) in Indian Shores.  Yes, that’s an outboard motor on the car’s roof and a beer bottle & can next to the boat’s steering wheel.  I assume this thing is drive-able.

One more sign before we go.  Topper King is in Clearwater.  I love the giant & somewhat crude truck depiction. 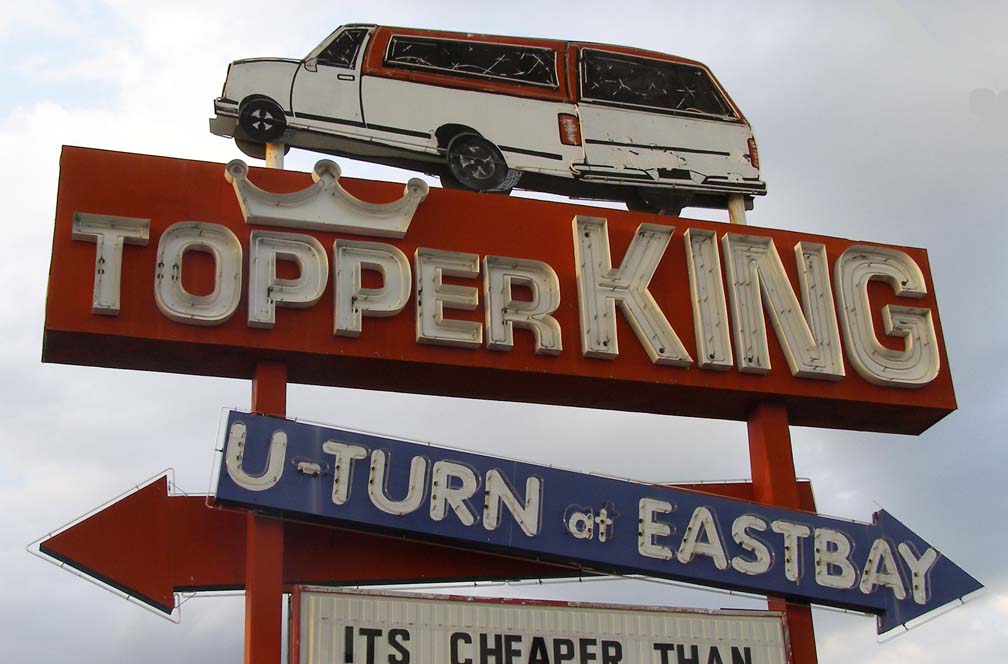