Starting this weekend off with a whirlwind neon tour.  Off to the Valley, bumper to bumper traffic for most of it.  It was fun but exhausting and now it’s after 1 am already.  Oh well.  Several disappointments — a couple come to mind.  The Corbin Bowl in Tarzana was only half-lit — a real stunner, such a shame.  But what’s worse — the Leonardo’s Nightclub in L.A. has been crappily adapted for the Candela Taco Bar — painted over & neon removed.  Let’s all mourn:

But let’s not linger on what was  — let’s rejoice in what still is!

Carlson’s Liquors in Woodland Hills, for instance.  By day — 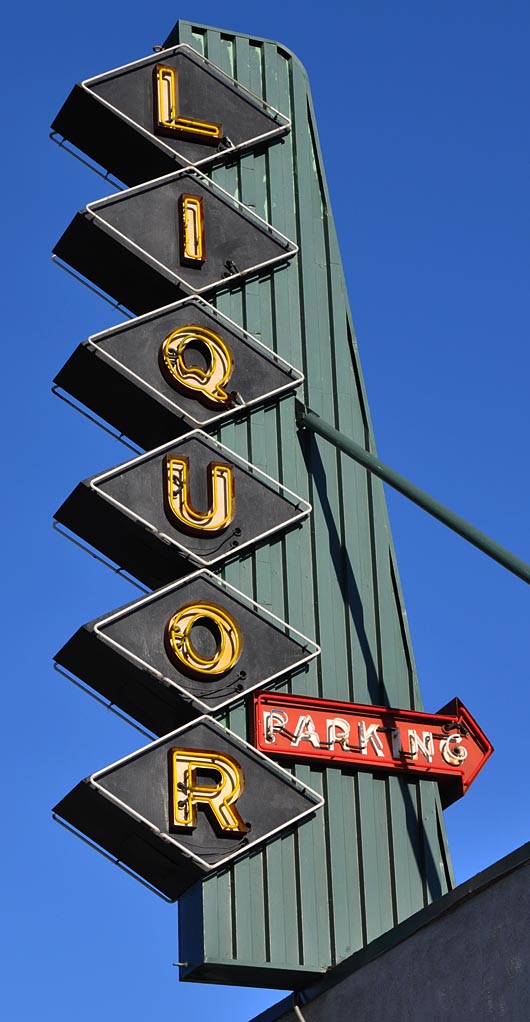 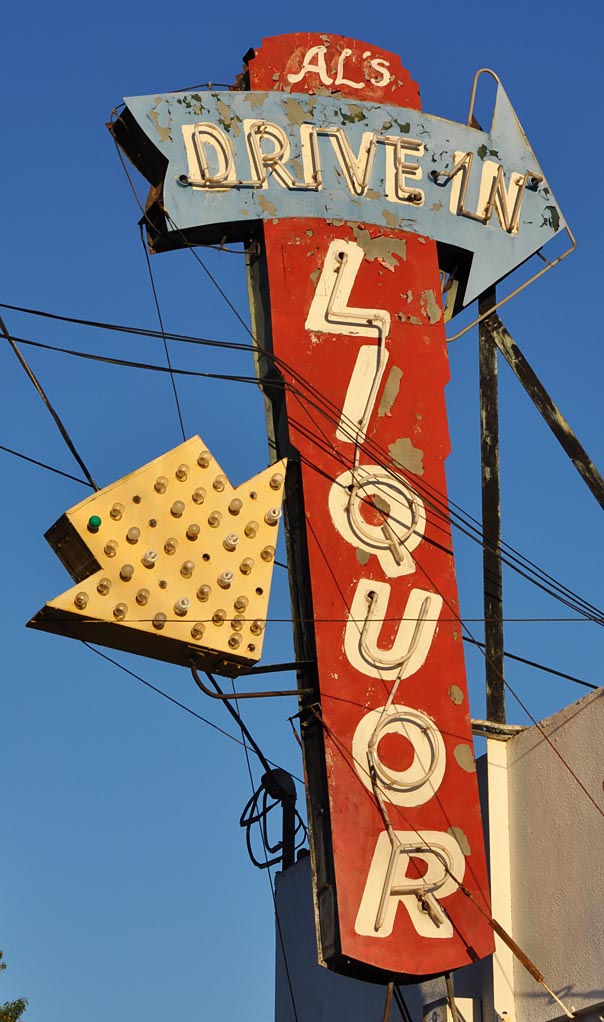 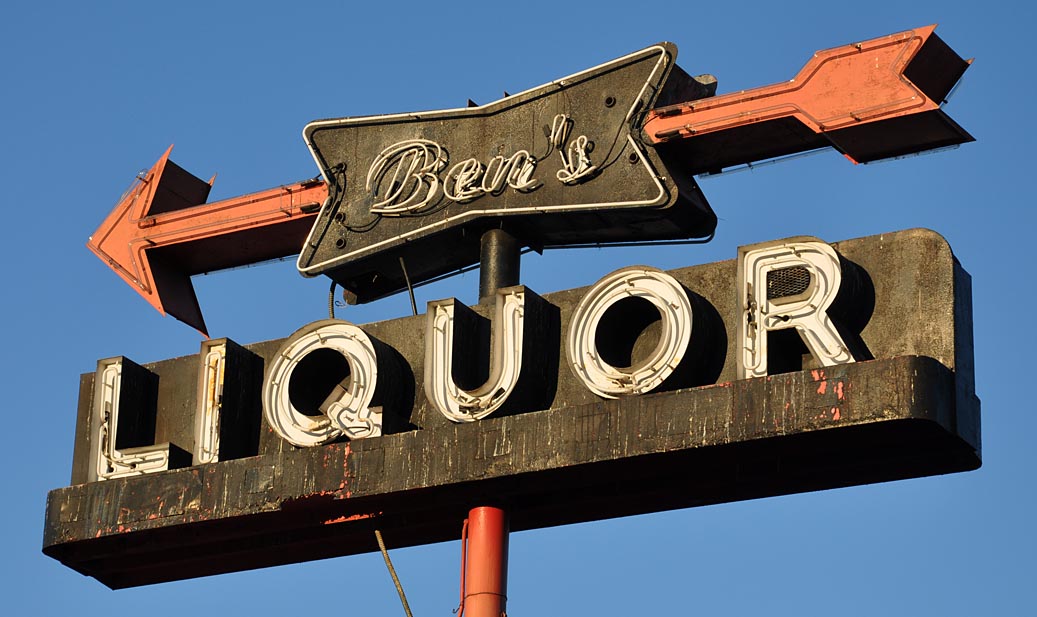 A darling of a sign in Van Nuys.  Too bad the sun was so low that the building shadow-ed the bottom of the sign.  But had it been morning, it would have been impossible to shoot around that Del Taco sign on the left: 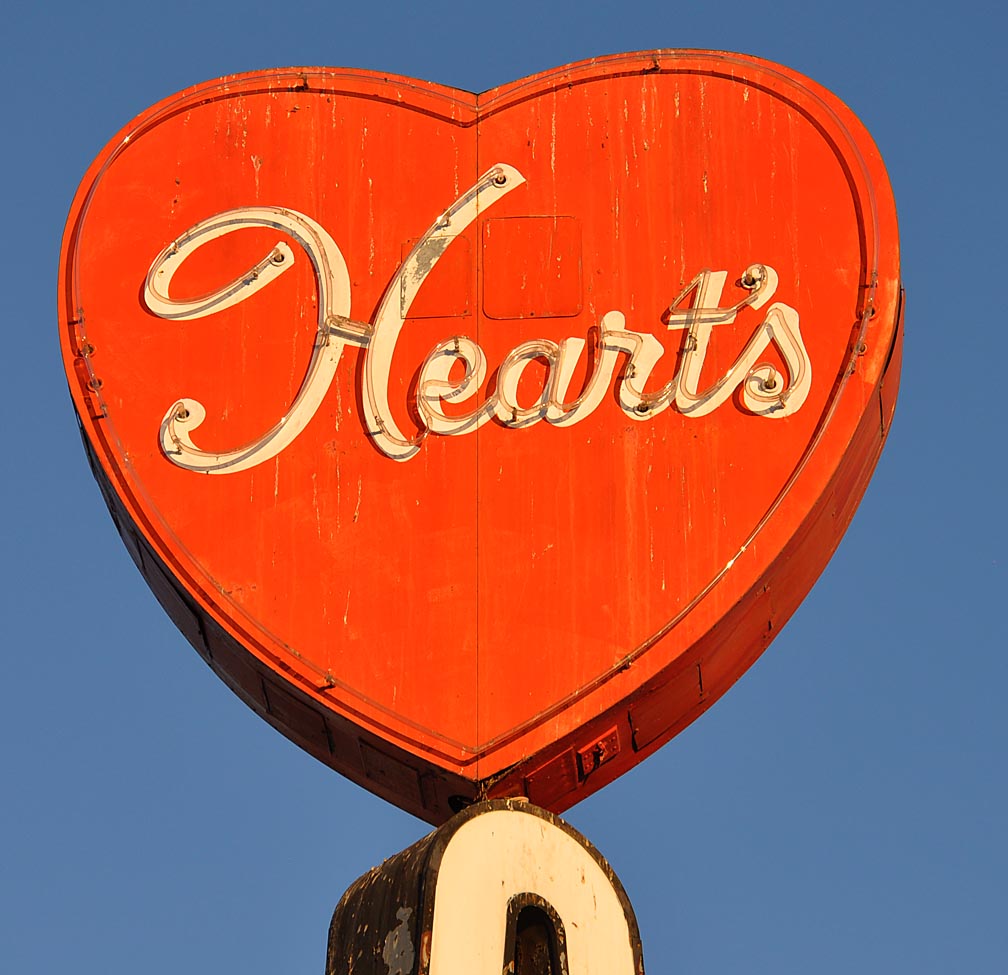 At the Valley Beverage Company in Sherman Oaks:

Also in Sherman Oaks — Antonio’s Pizzeria & Italian Restaurant.   Some of the “boot” neon border is out on both sides.  I would have shot the other side so the boot would be facing the right way — but there was a tree challenge on that side:

And lastly — I think this might be a modern sign.  Or maybe it was just re-lettered for  Champ’s Sports Bar in Burbank.  The arrow looks vintage:

OK — that’s enough for now.  Lots more goodies tomorrow night.  I thought I’d be doing some Orange County this weekend but that seems very unlikely.  The list of L.A. reshoots kept growing as I looked at my website photos from 2008.  So OC will have to wait.  Although there is one Must-See (I’ll keep you in suspense) this weekend in Newport Beach.  So maybe we’ll dilly-dally down there a bit to get out of this L.A. heat.  It was 95 in the Valley tonight at 6 pm.  The dogs and I are definitely not used to this after living near the beach where it never gets above 70.

Lots of killer neon signs from tonight over at Flickr & Ipernity (I’m killing myself uploading to both now).  So click on your preferred format:
http://www.ipernity.com/doc/roadsidearchitecture/home/photo
http://www.flickr.com/photos/agilitynut/

4 thoughts on “Just another L.A.-ish weekend”