Hey there!  I needed a little break from the drudgery of my real job and my website labors.  And the dogs are thrilled to be off on adventures!  Though they’ll miss all that good scavenging back home.  The park has been a bonanza of picnic scraps lately.  This will be a little four-day affair — Jersey Shore & Philadelphia-ish mostly, a little Delaware, and if time a bit of Baltimore area.

The usual applies (my faithful blog followers might want to skip this paragraph):  clicking on photos makes them bigger.  Different photos posted each night over at Flickr:
http://www.flickr.com/photos/agilitynut/
My Flickr photos & blog posts are done late at night, only while traveling.  So it’s just a sampling of the photos taken each day.  And after driving and shooting all day, my writing is not my best.  The subjects covered are the same as my website (buildings, signs & statues) — but usually the stuff here at the blog is the “junk” that won’t make it to the site.  Funky signs, oddball buildings & more random stuff like my dogs & food.  Flickr agilitynut is for the prime-time stuff which will make it to the site.

OK with that out of the way… Let’s get to today.  It was a real mixed bag of sun and grey.  Very summery warm.  With that deliciously skanky marshy smell of coastal marshy NJ.  I guess they have it elsewhere like Rhode Island but I associate it with NJ.  And love it.   The forecast is for mostly sun — Saturday might be rainy & miserable.

Stopped in Perth Amboy for this one.  It’s been on my to-shoot list for years.  Evidently a garage… 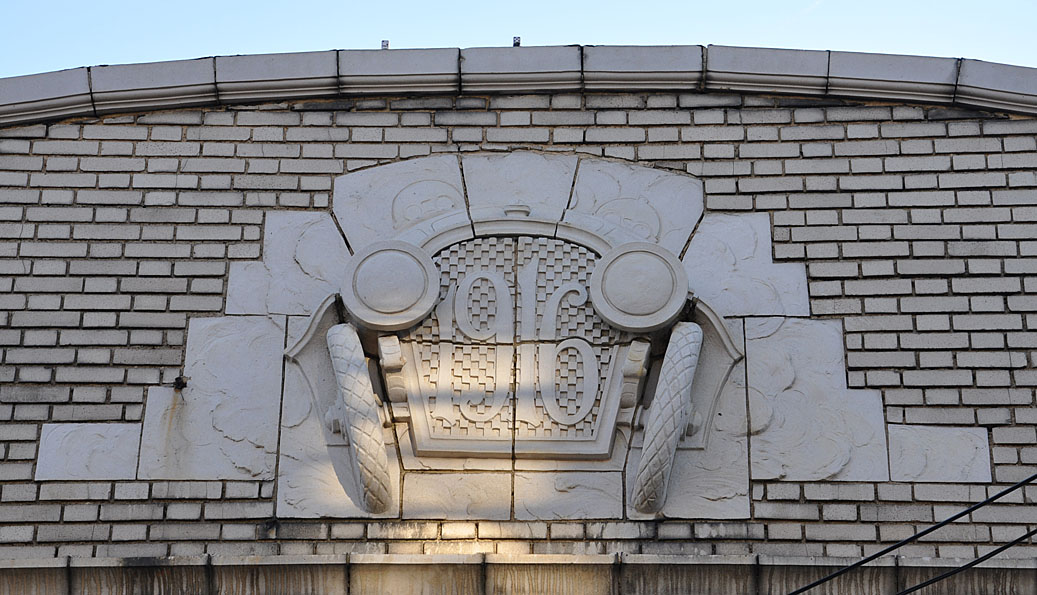 … and possibly built at the same time as the building on the left which is also identified as 1916.  Maybe a dealership? 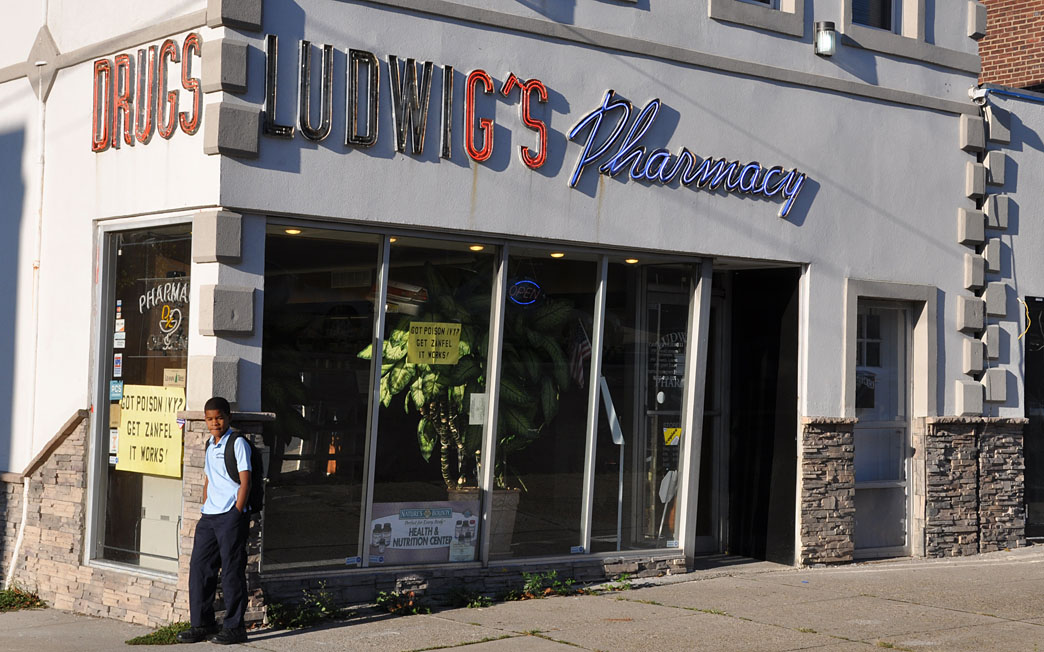 A sweet yet sad abandoned gas station in Toms River.  A big modern canopy from much later in front of it.  Pumps gone.  I’m not optimistic that this will survive since it’s surrounded by all kinds of new development chain stores & such. 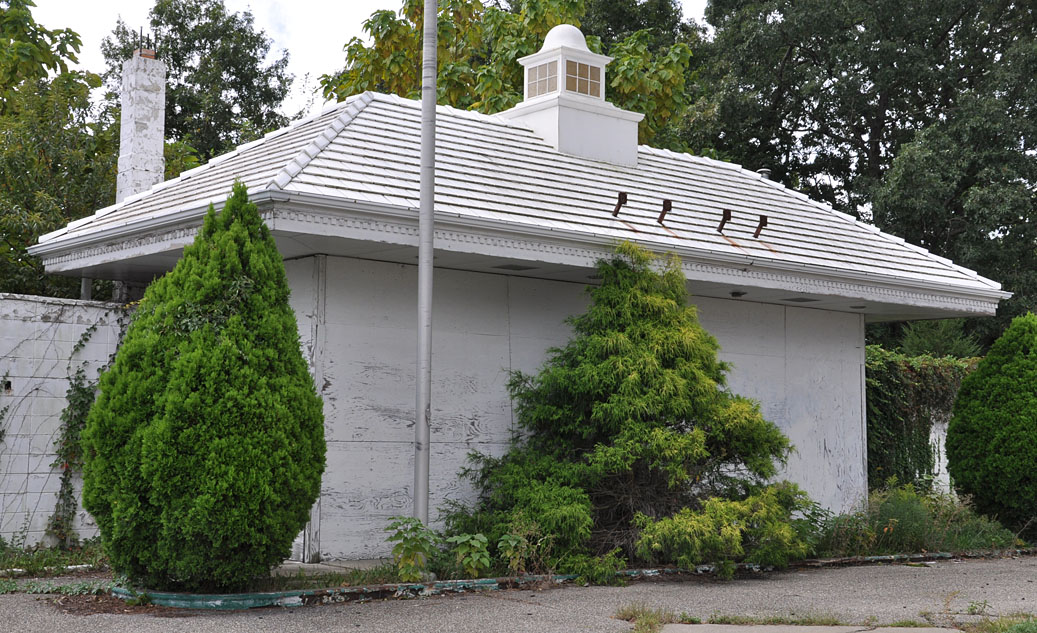 I love the beachie amusement park towns in the off-season.  When everything’s shuttered and no one’s around.   And this time of year, most of them are legal for off-leashing.  And the ones that aren’t, are either deserted or no one seems to mind.  The kids got three beach romps today.  And it wasn’t enough.

A couple of shots from Seaside Heights: 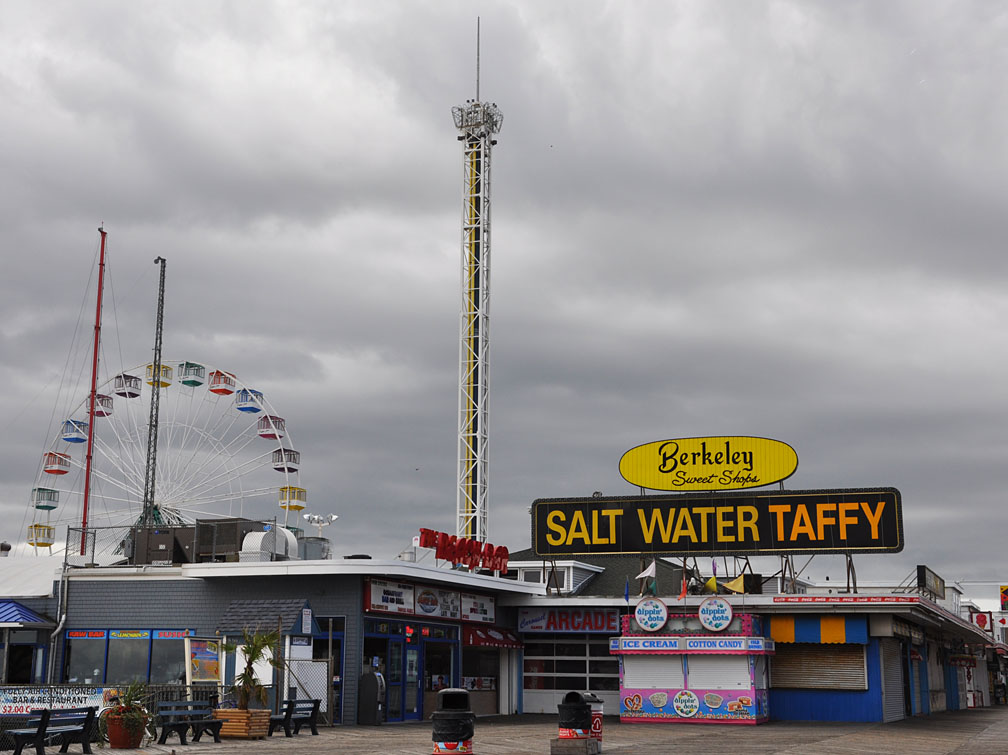 Yeah, the palm is plastic – no real ones in NJ… 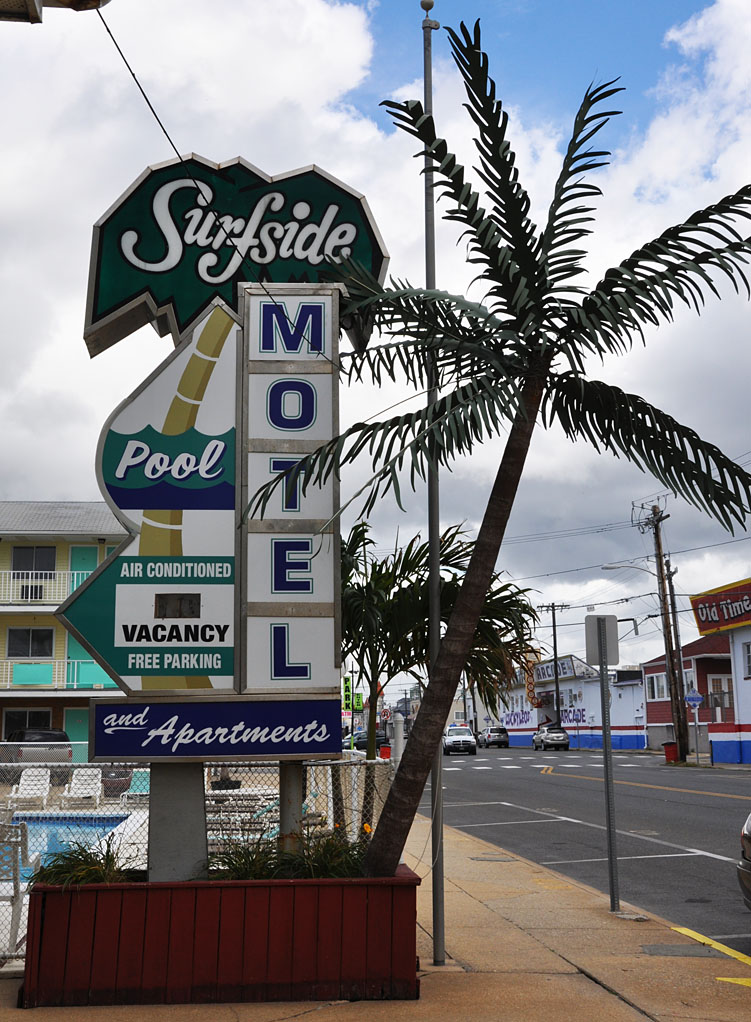 Sitting at a light in Atlantic City — then BLAM.  A woman in a Honda Civic plows into me from behind.  She must have been doing about 30.  She said her foot slipped off the brake.  Her car got a barely a scrape but poor Sparkle now has a badly mangled bumper and the Dutch doors don’t open.  The cops came to file a report.  I have her insurance info & all that.  So I’ll be getting a new, free bumper.  Again.  The same thing happened a couple of years ago in Long Island — just sitting at a light.  Is Sparkle just not big enough for people to see her?  Is white an invisible color?   Anyhow, just a hassle — nobody hurt.  And a waste of precious shooting time. 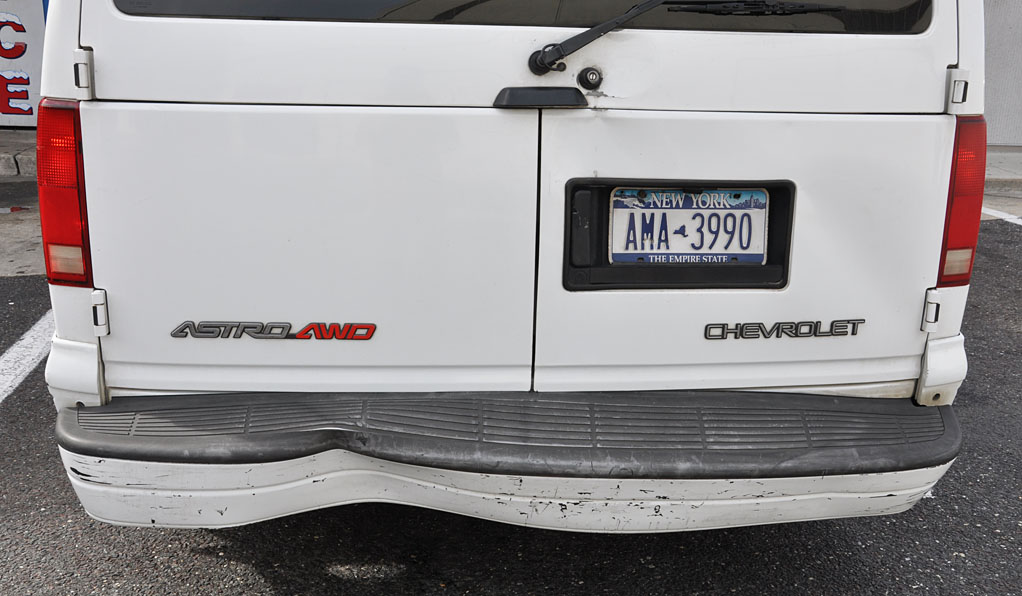 From Egg Harbor City.   I like how the bottle serves as an arrow: 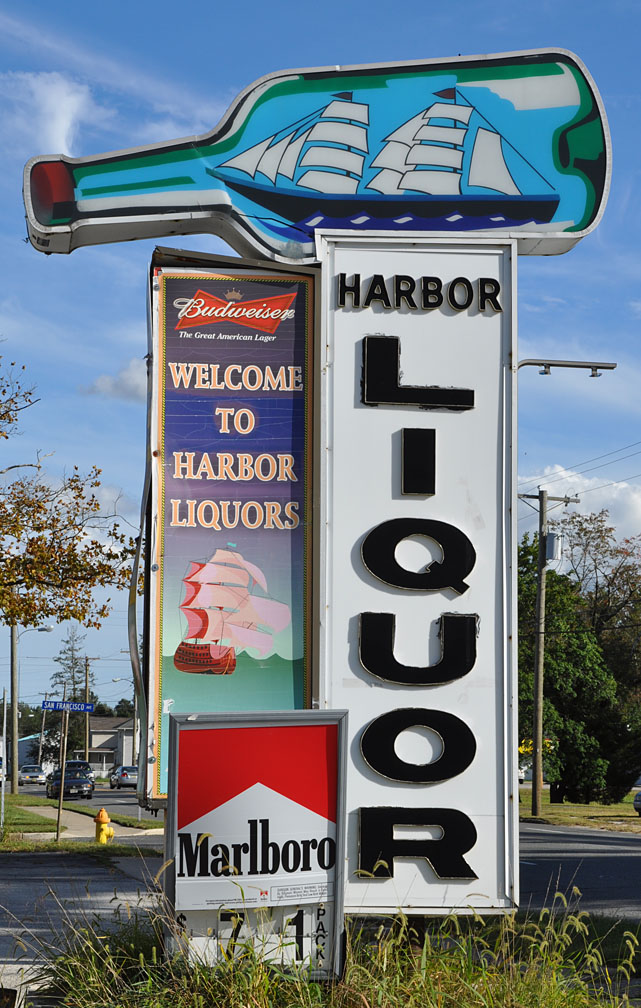 On to Ocean City — where everything was locked up tight.  Including Tee Time which I was really hoping to revisit.  I shot it about 10 years ago when it was pretty derelict.  Then I was told mistakenly that it was demolished.  Then I was told it wasn’t.  Here’s a fun sign near the place which gives you an idea of the vintage wonderfulness of it: 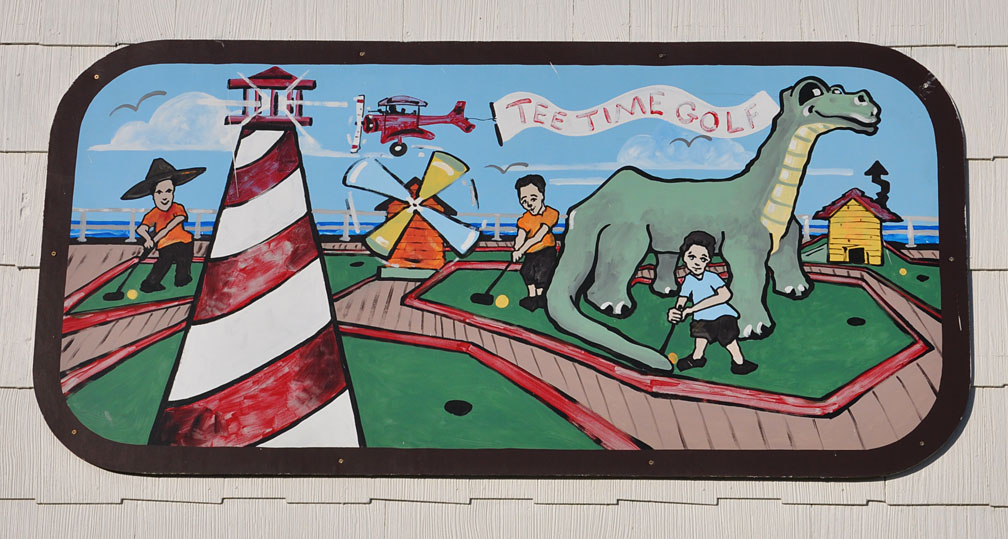 And I was thrilled to see it looking well-taken care of with the figures repainted & shiny. But DAMN stuck behind chain link.  Note the Lucy the Elephant on the right (photo of the real Lucy at my Flickr stream tonight).  I will make a point of getting back here in the spring: 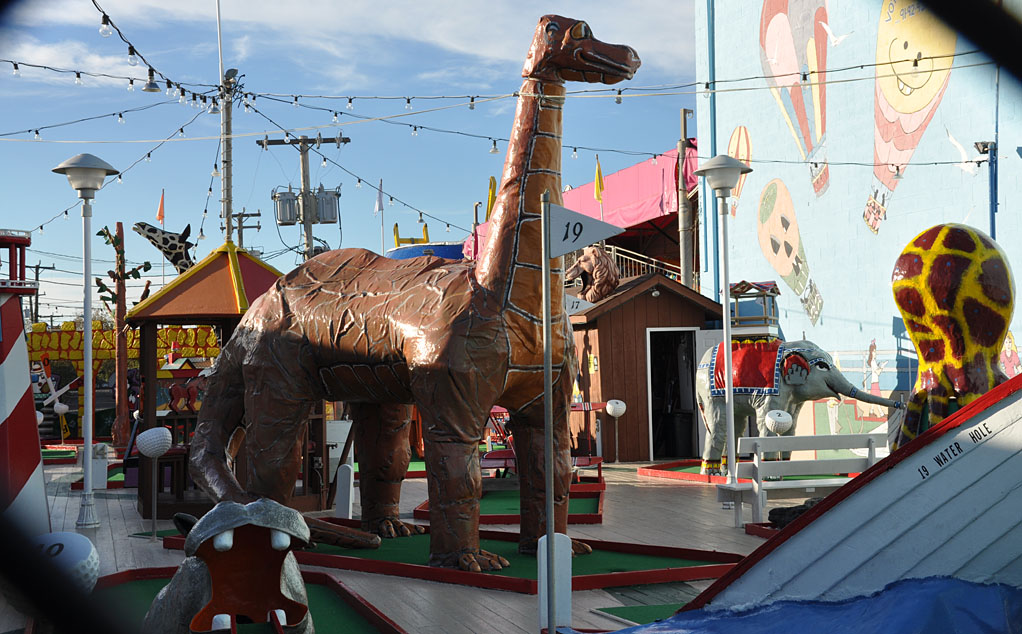 Just about the only thing not closed on the Ocean City boardwalk today — so I had to have one last summer treat.  Rather than the classic Kohr’s orange & vanilla, I went with the chocolate & peanut butter.  A+. 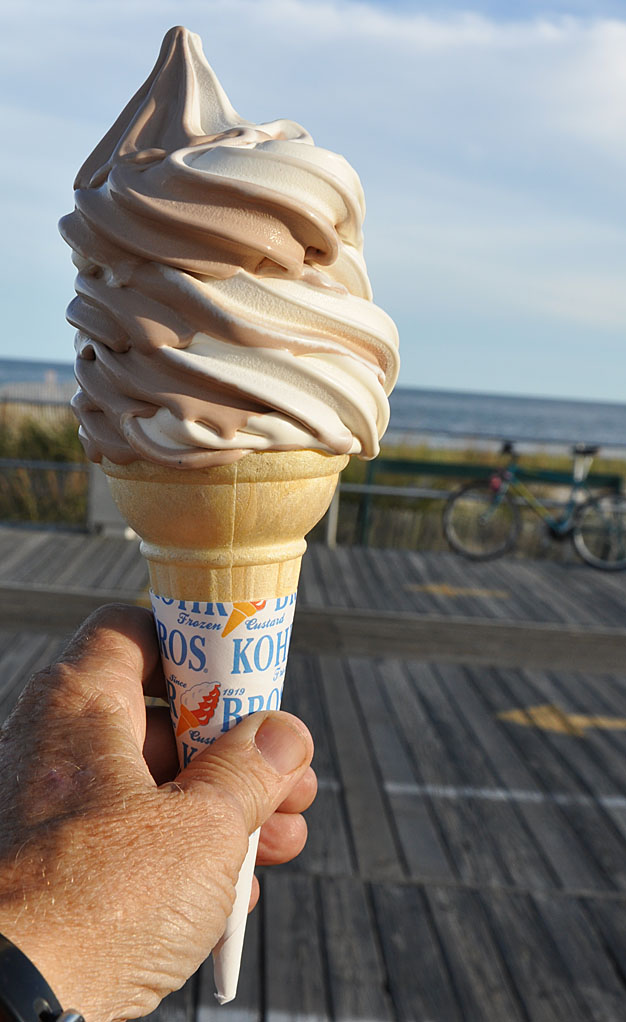 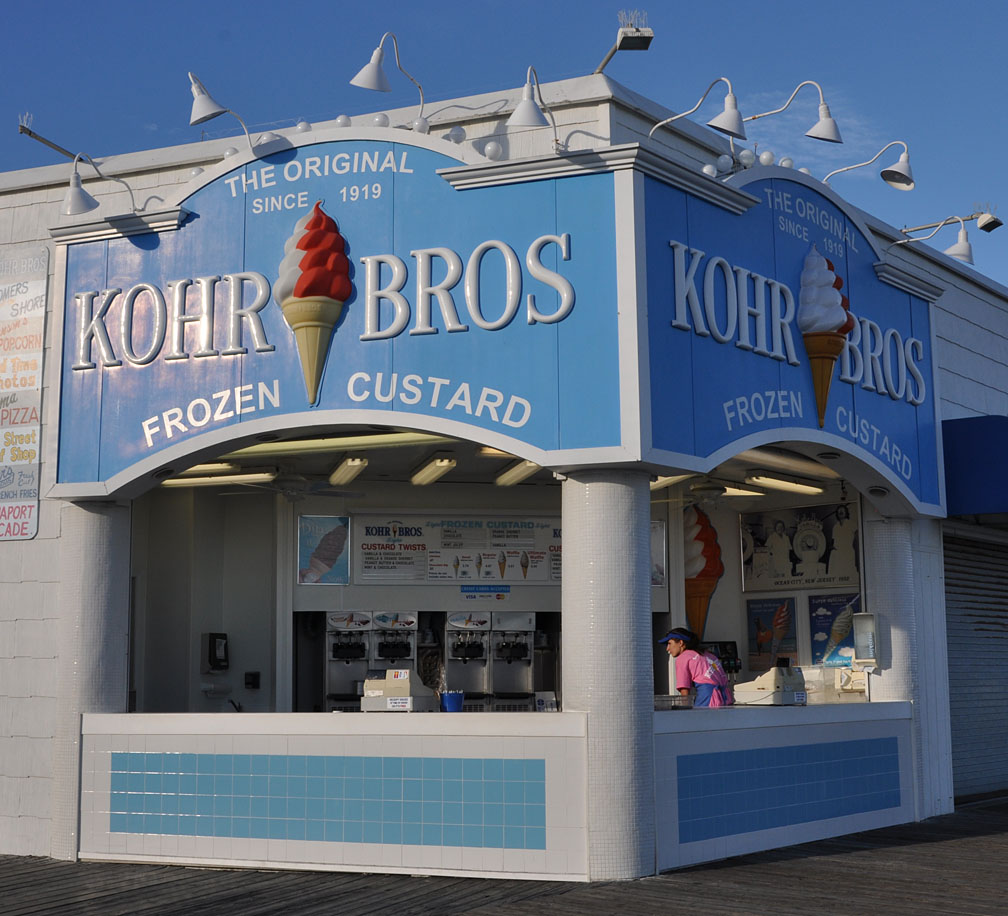 One more from Ocean City — a still operating five-and-dime store:

On to Wildwood.  The SCA (Society for Commercial Archeology) is having their big conference here next weekend.  And even though I’m a regular contributor to their publications, I won’t be attending.  Just didn’t work out that way — procrastinating on my part, a crazy work schedule, money, etc.   I think the deadline is past for registration.  But if you’re interested in going — maybe they can squeeze you in:
http://www.sca-roadside.org/content/conference-schedule-0

So much of Wildwood’s mid-century modern motels have been destroyed — but there’s still plenty to see and shoot.  I’ve been there at least a half-dozen times and it’s still fun for me. 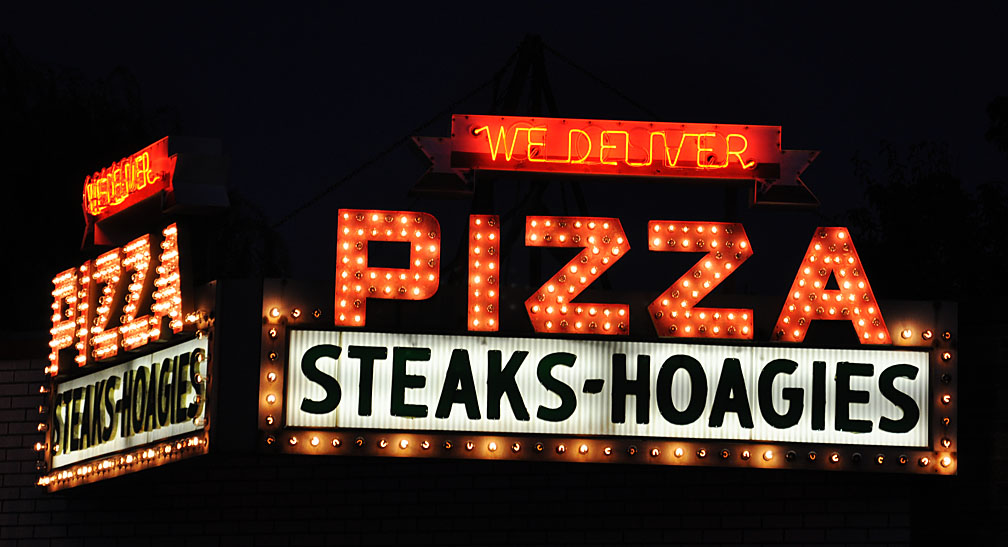 Another shot from Laura’s Fudge (more over at Flickr tonight): 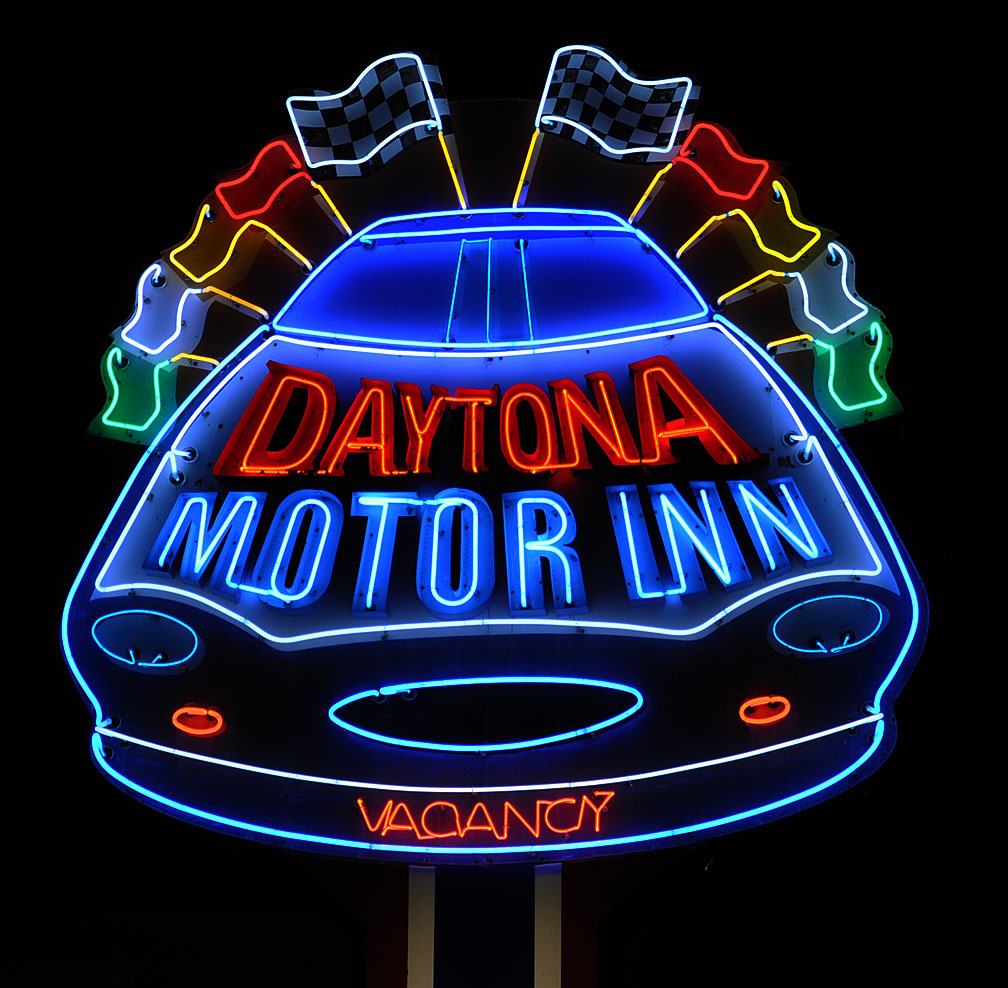 One of the small but wonderful signs: 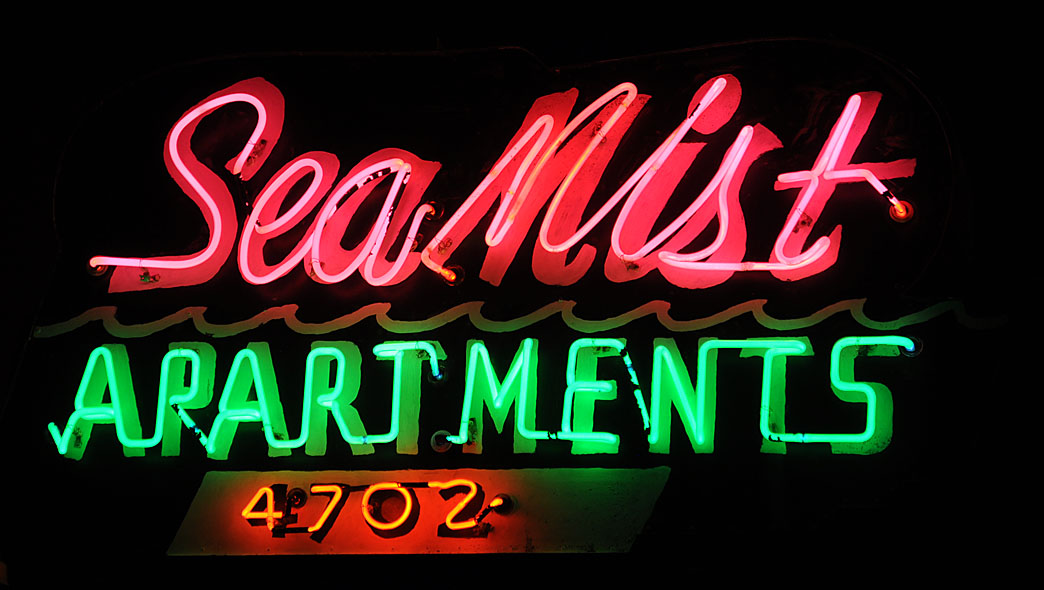 One of my faves: 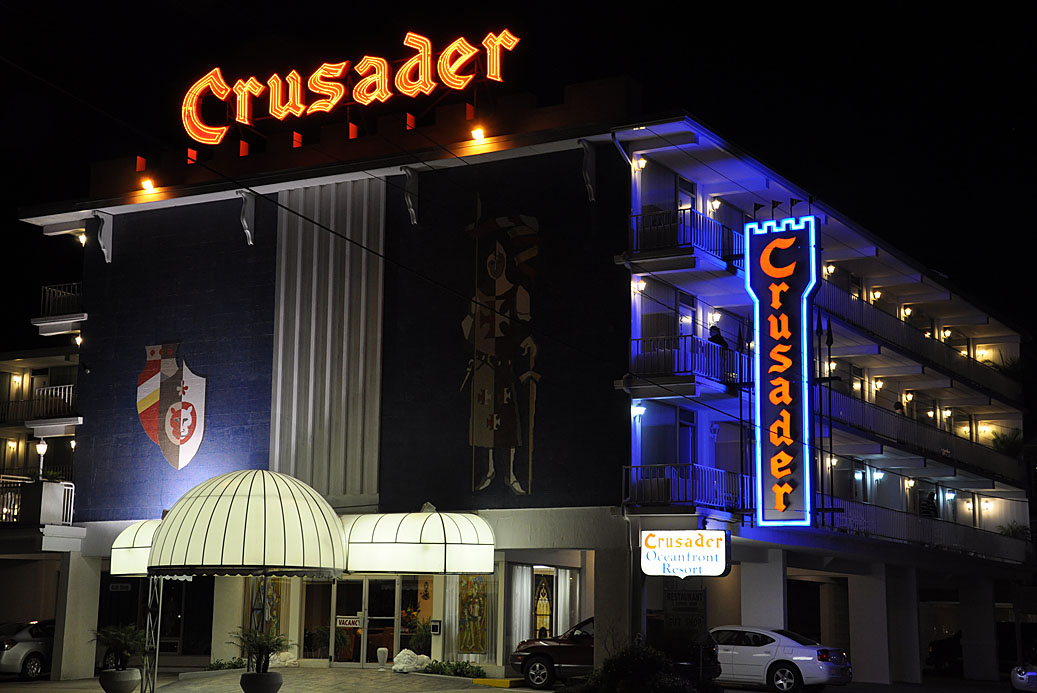 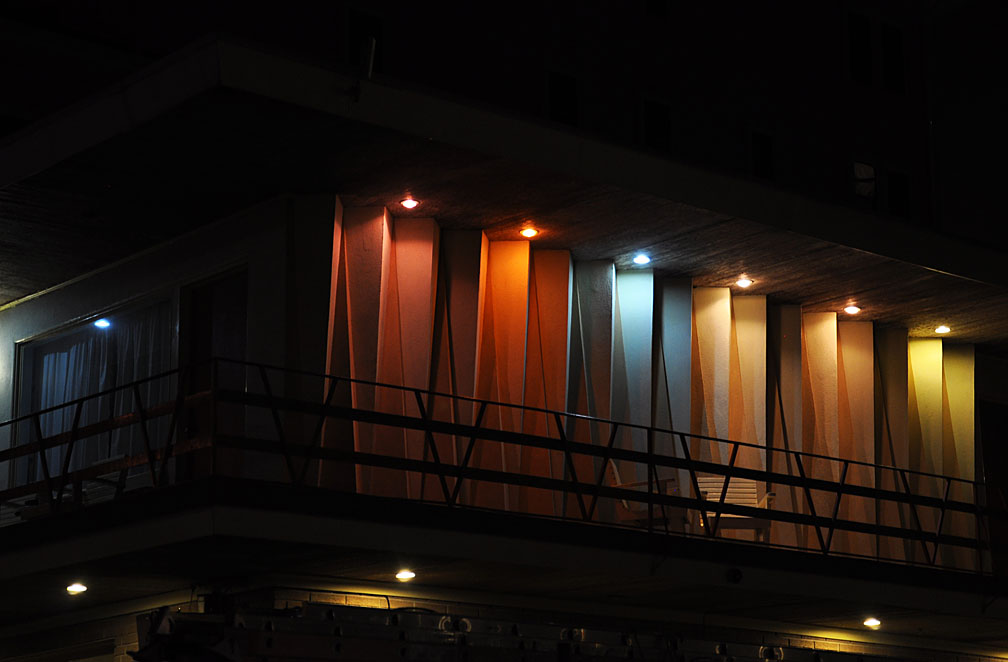 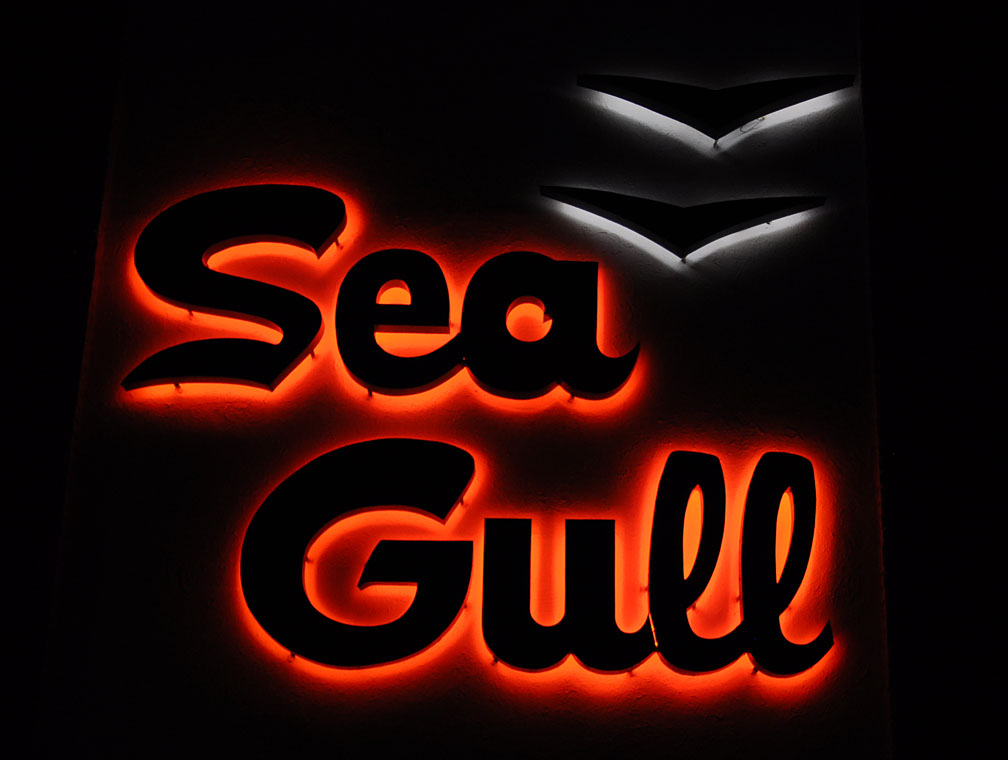 And one more for the night — some of the neon out — but still terrrific: 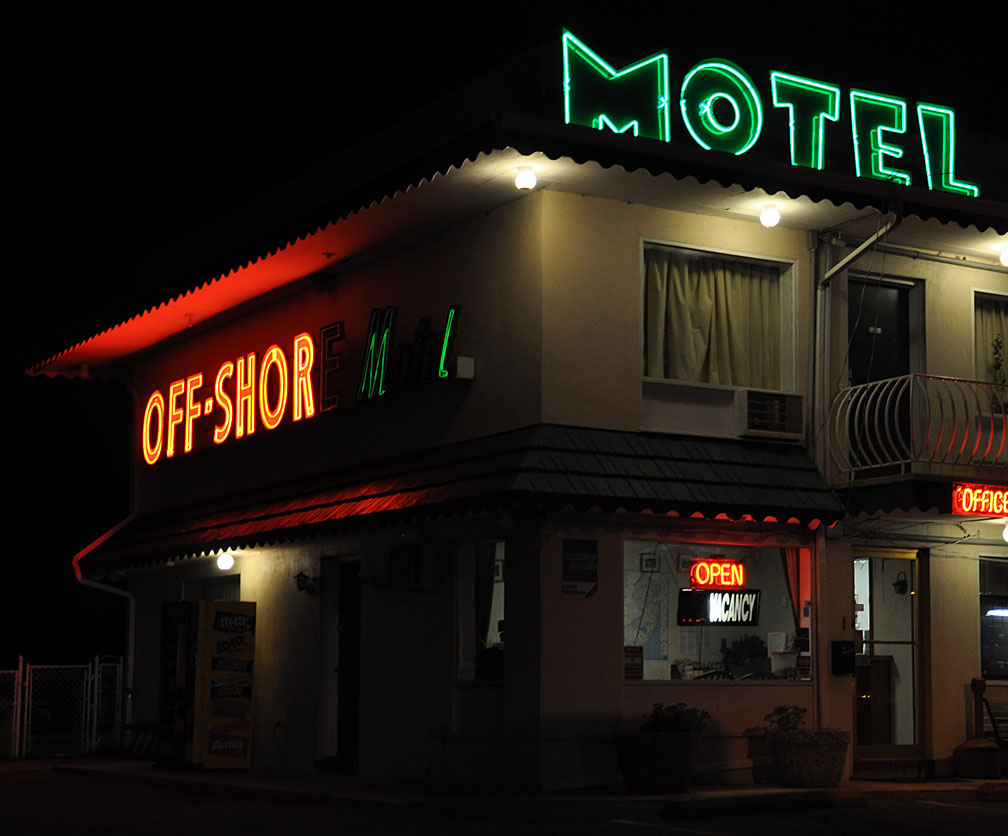 Tomorrow, lots more NJ and then on to Philadelphia.  I hope you’re grabbing what’s left of summer wherever you are, too.