Gorgeous day — many, many miles covered.  Little one and two shot towns.  If I was a landscape or cloud photographer, I would have taken thousands of photos today.  But I took less than 100.  A normal day, I shoot about 150 or 200.  About 99% of them are used either at the blog or the website.  I don’t futz around taking different angles of things.  I just stop, hop out, take one or two photos and back on the road.  Signs I usually only take one photo.  Buildings usually two.  But for something complex, I might take five.   For a one-photo stop, I’m usually there for 30 seconds.  Sometimes, like today, I’ll drive an hour or two just for that 30 second photo.  Nuts, huh?

But despite the low volume of shooting today, I’ve got a bunch of photos for you.  The day started in Salida — so let’s begin there.  Maybe the smallest Elks sign I’ve ever seen — usually they’re two or three times as big: 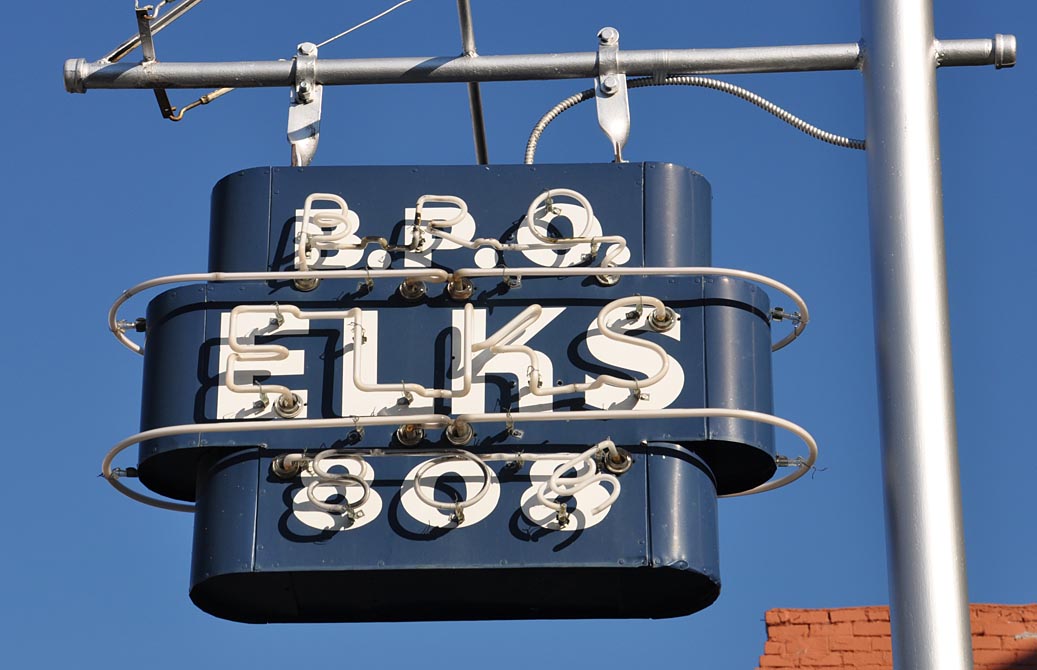 Also Salida and another fairly small sign.  I don’t think I’ve ever seen a forked arrow tail like this one before:

Moving on to Alamosa.  Probably repainted a time or two — and there must have been neon there, too.  I’m guessing that the pole on the right was what I call a “light stick” with flashing bulbs running along its length:

On the building itself — this imprisoned neon sign behind wire mesh.  I believe this protection solution preceded today’s plexiglass:

I have to include this one simply because I had a Chihuaha named Spuddy.  He came with the name.  Whereas this sign was obviously changed from something else TO Spuddy: 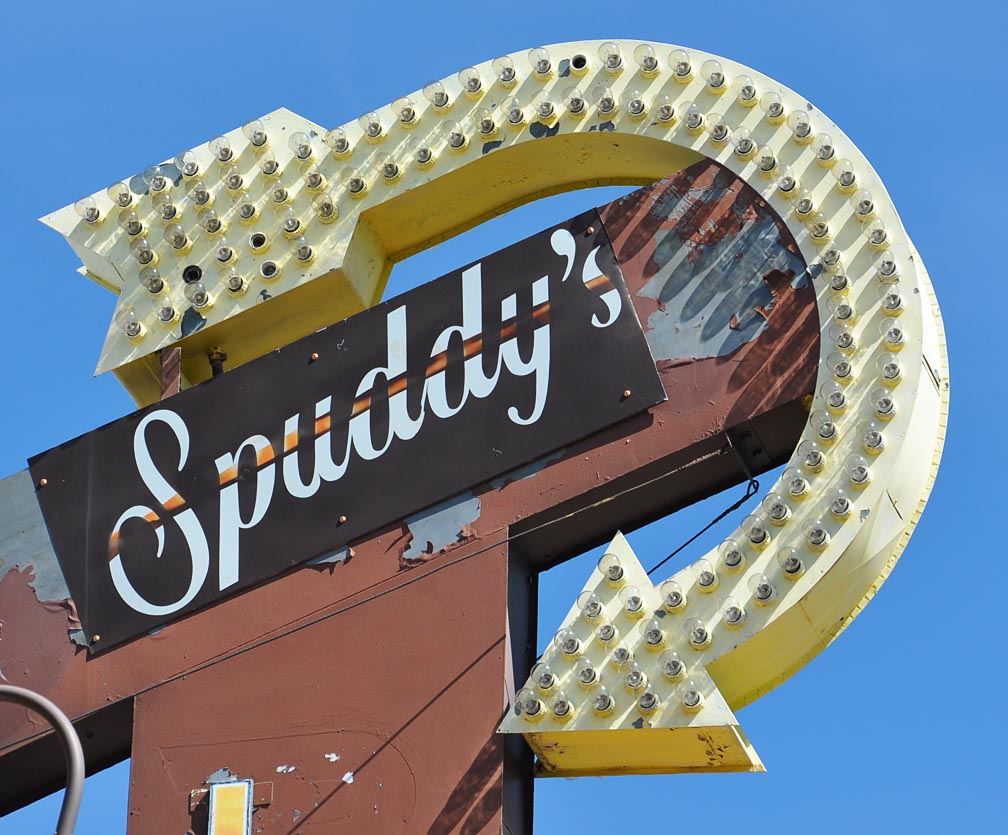 From Fort Garland:  a Tastee-Freez cone sign lopped off from its horizontal text sign and reused here by Old West Cafe:

Also Fort Garland — this place looks like it’s been closed for a while.  I’m glad I got to see it before it gets repainted into something lifeless:

On to Alamosa.  The “Campus” is a reference to the nearby Adams State College.  We all know two signs are better than one.  The restaurant is on a side street and I guess they thought this would help make them more visible: 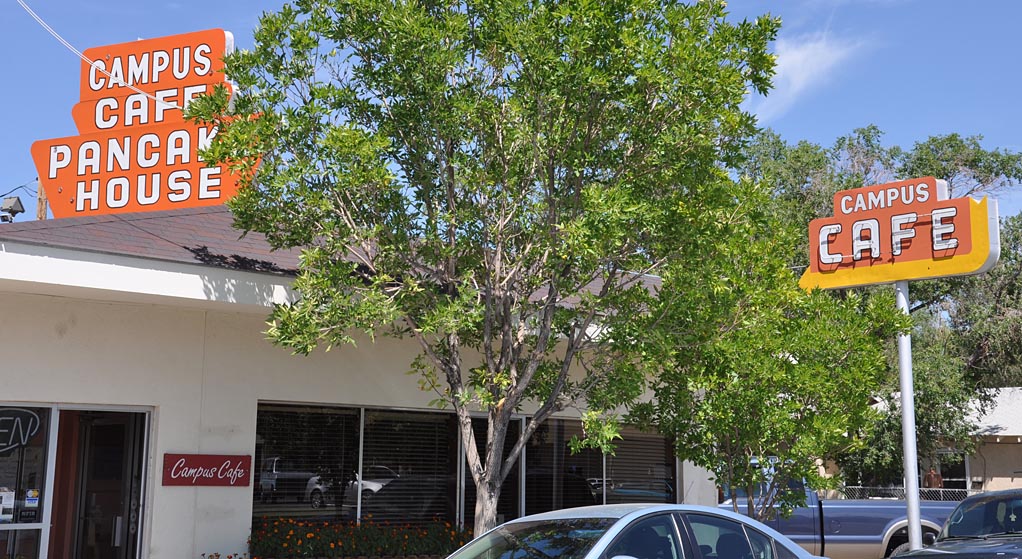 Gabe’s was originally a hunting & fishing store — hence the fishie inside the circle: 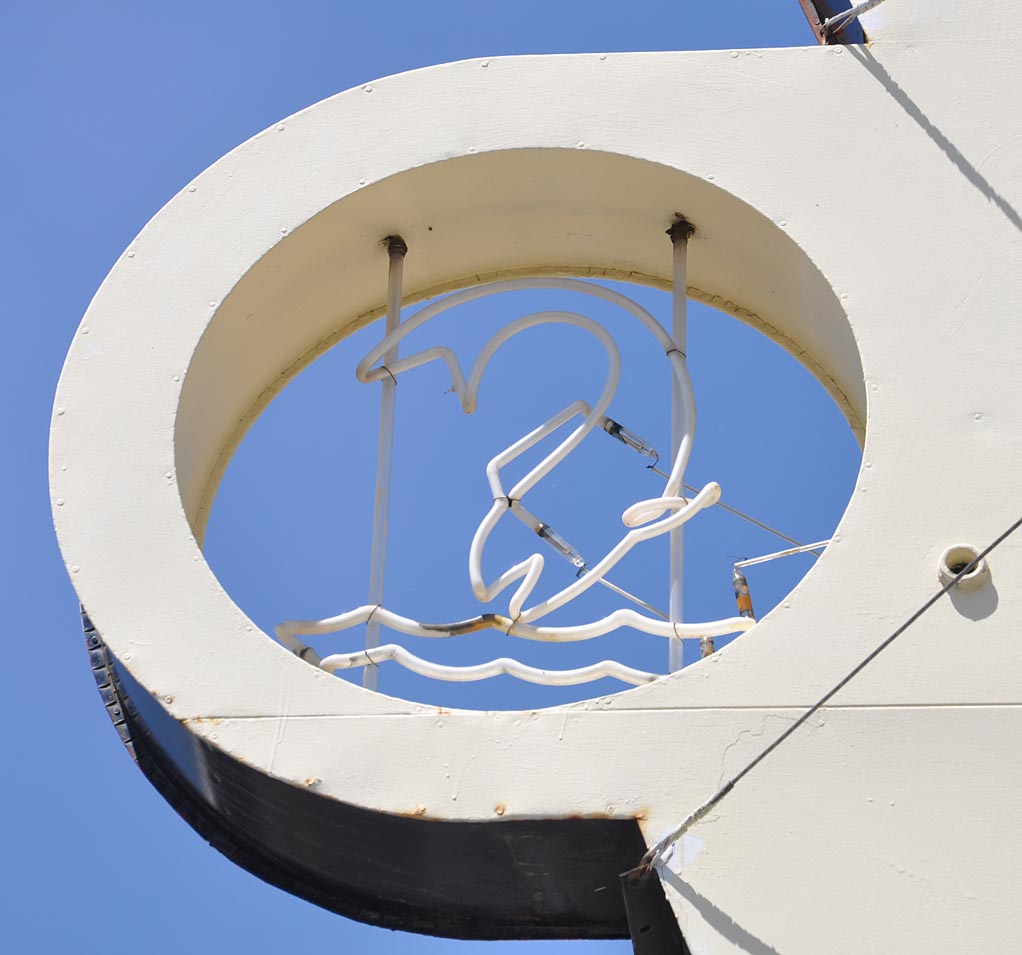 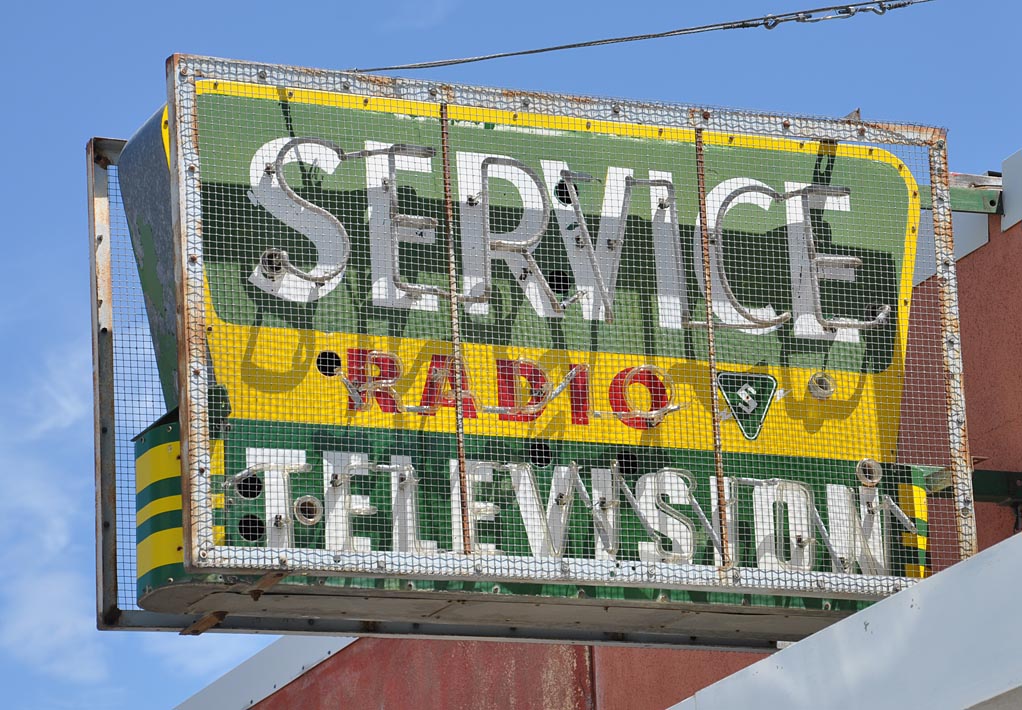 Moving on to Center.  This street light is located smack dab in the town square.  It doesn’t work anymore but I guess the town is attached to it.  The lettering on it looked 1930s or 1940s.  Seems like a crazy amount of mechanisms for what it did:

A quick little foray into New Mexico for some stuff that was too remote for the spring trip & closer to Colorado.  From Antonito, NM:  Cano’s Castle (aka the Jesus Castle and the Beer Can House).  Folk art obsession using hub caps & other metal stuff.  Sucky time of day to shoot it.
http://www.roadsideamerica.com/story/11786 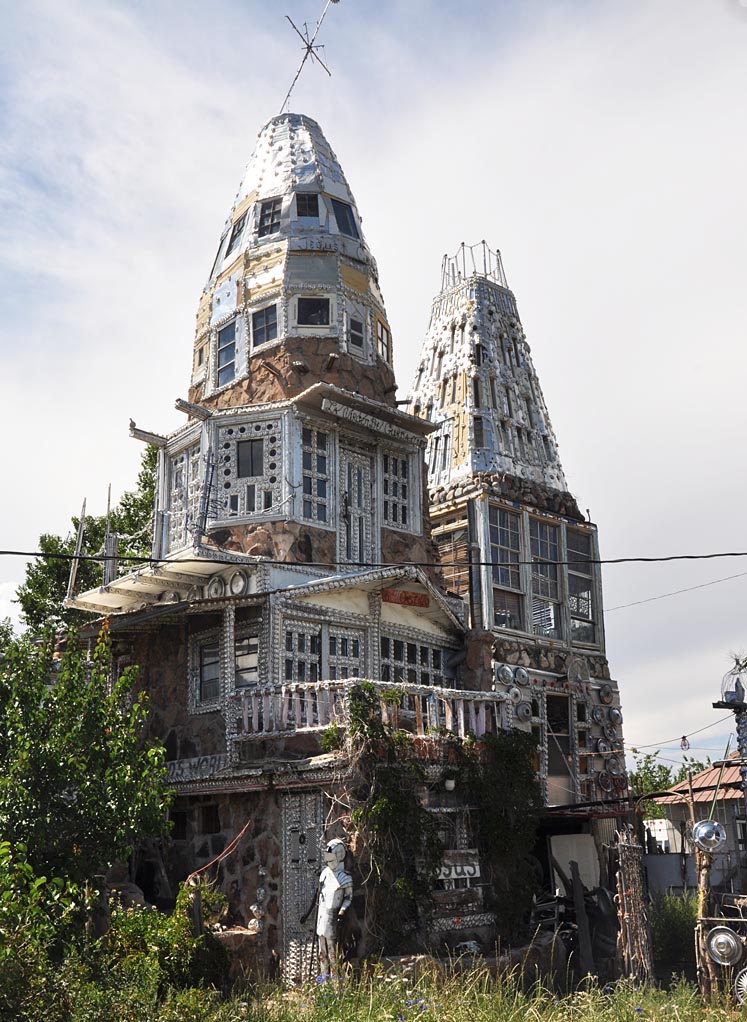 While in Antonito —  this was a bit of a mind-blower.  Like the clock had been turned back 150 years or so.  Now, I know nothing about trains — but this was very impressive.   Seemed to be pulling a load of coal. The engineer (that is what you call them, right?) blew the whistle (I think that’s right) LOUD and there was all this smoke and craziness for a few minutes as it chugged through the intersection.  Wow!  You can ride this thing or just go visit the trains:
http://www.cumbrestoltec.com/

From Chama, NM.  The Y Motel is at a Y intersection.  Hard to shoot with the pine trees: 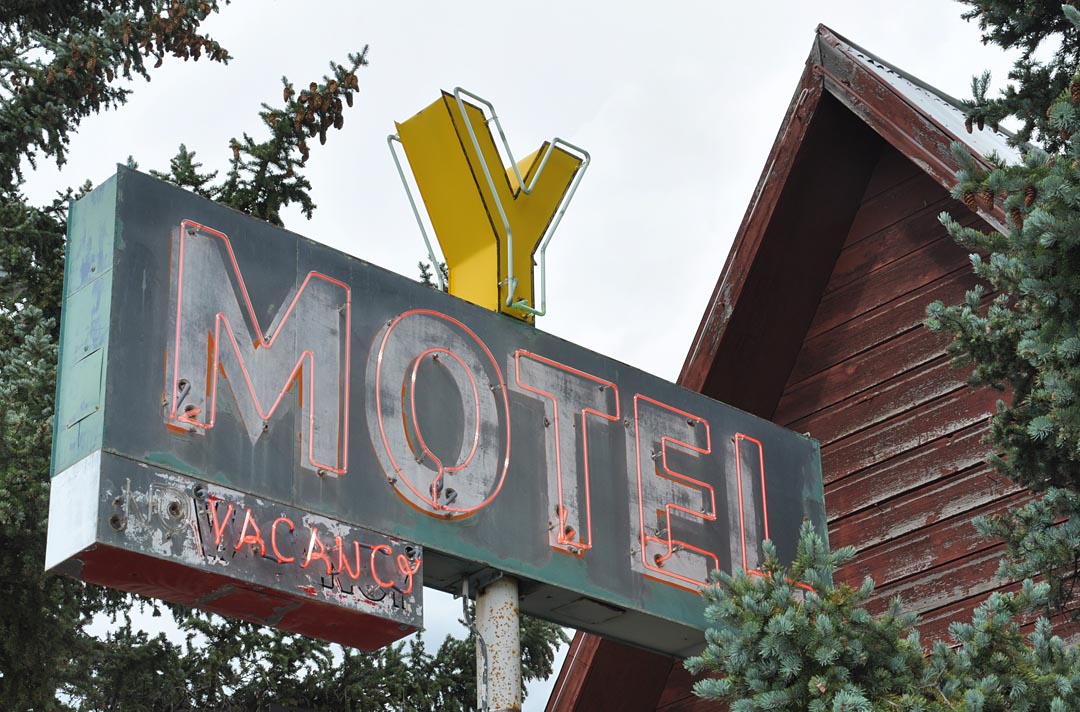 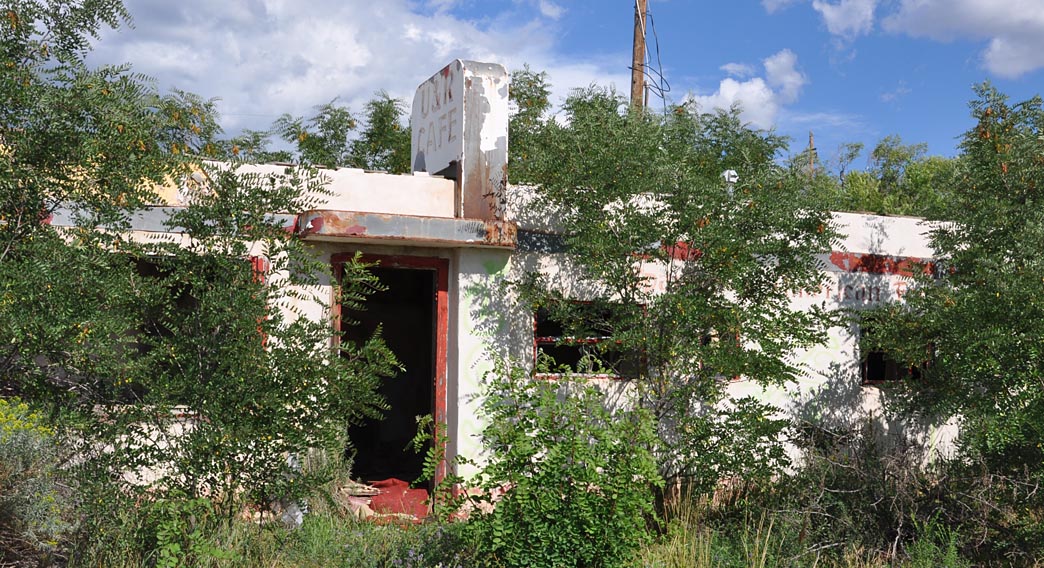 From Dulce, NM with the dark clouds moving in:

We arrived at our final destination of Pagosa Springs, CO in mixed weather.  Rainy one second, sunny the next.  Guess that’s life in the mountains.  Neat double-outline neon:

And I found a big field for the kids before we called it a night.  I got this gigunda Chuck-it toy before this trip.  It comes in really handy for the hard-of-seeing Nik when the grass is deep.   It’s very light but hard to throw with my kids’ sized hands — so I mostly use it as a kickball. 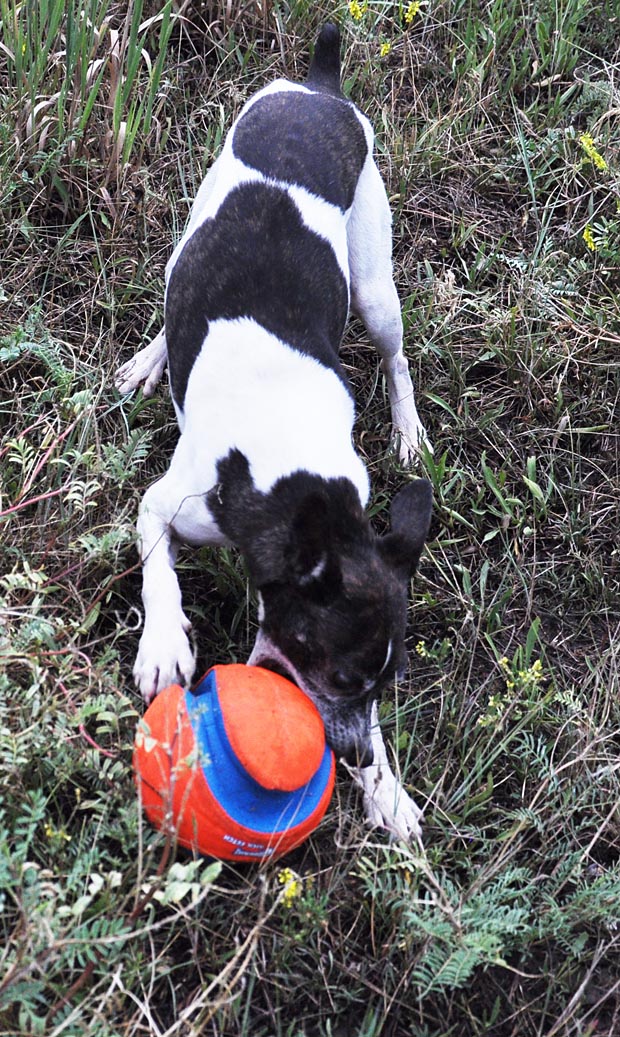 And Fixie decided to pass on this outing.  “You guys go ahead, I’ll just wait here.  I’ll hold it til you find some real grass.” 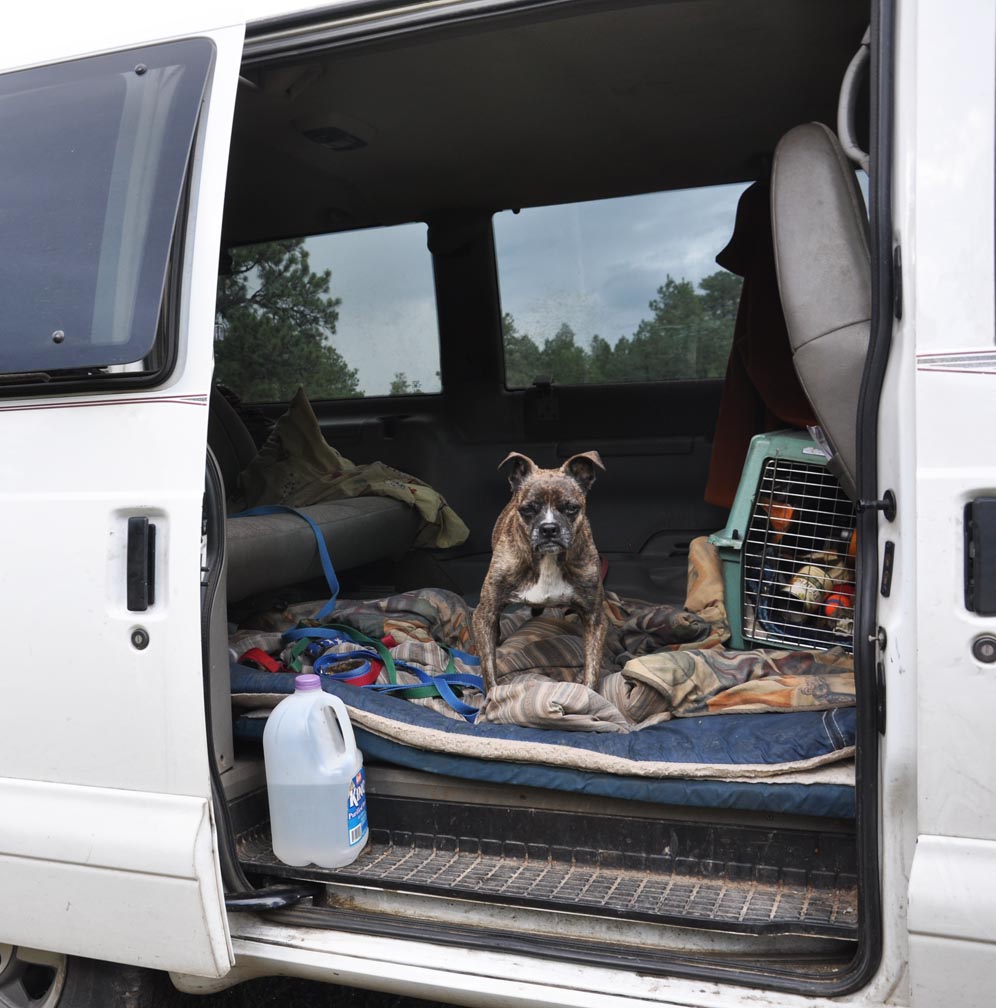 More mountains tomorrow.  Probably two or three more days in Colorado and then on to the Wyoming part of the trip.  Since we arrived early, I banged through Flickr & this post and am off to bed just after 11 pm.  That’s a first!