It takes a day like a yesterday to really, really make me appreciate a today like this one.  Perfect weather (cool), relatively little traffic, and tons of photo-ops.  Mostly the unexpected blog-quality stuff — not the sought-out website stuff.  So, go get yourself a cold one or a hot one — this is gonna be a long post.  I covered a lot of ground today — from the southeast corner to just about the northwest corner of the state.  A chunk of interstate driving in the afternoon — but mostly desert — and then forests.  Tonight here in Williams, they say it will be 27 degrees.  What a switch from the lows in the 80s of Phoenix just a few nights ago!

Let’s start with something completely random — a birdhouse assemblage in Bisbee:

A couple of travel trailers at the Shady Dell in Bisbee that I don’t think I’ve shot before:
http://www.theshadydell.com/

This neat panel truck (is that what you call them?) in Lowell: 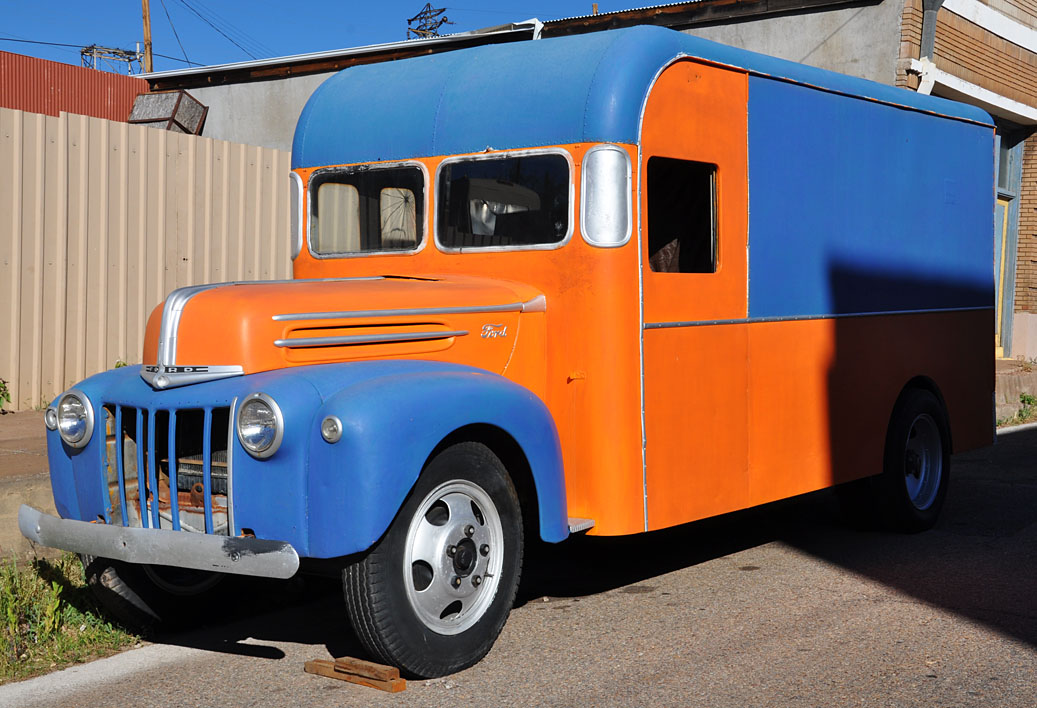 And speaking of vehicles.  This is how I’ve been driving her around for the past week or so.  This hand towel pretty much stops the squeaky hood sound.  It’s humiliating enough with her bruises and misaligned headlights — but this is really over the top.  Poor Sparkle… 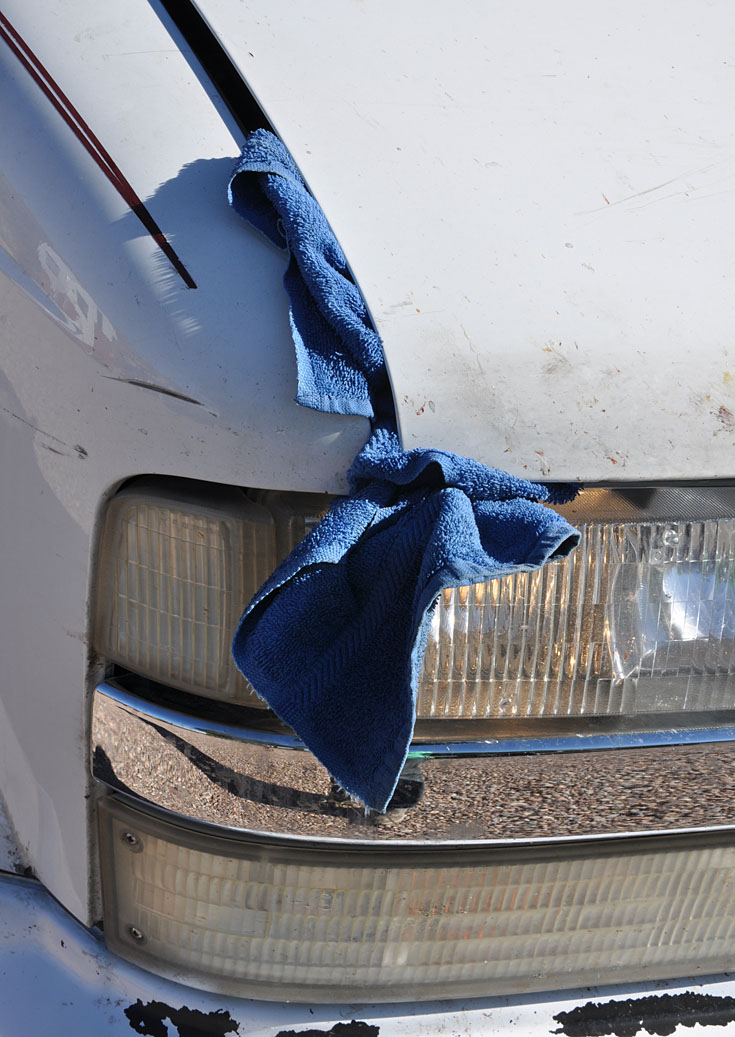 Just outside of Douglas.   The DQ is gone — although they didn’t bother to remove the sign.  Imagine all the disappointed kids (and adults!):

Still Douglas.  I love these “to do” list signs on the downtown theatre:

On to Willcox.  Why so many signs?  I AM actually looking for interesting buildings — but just not finding a lot: 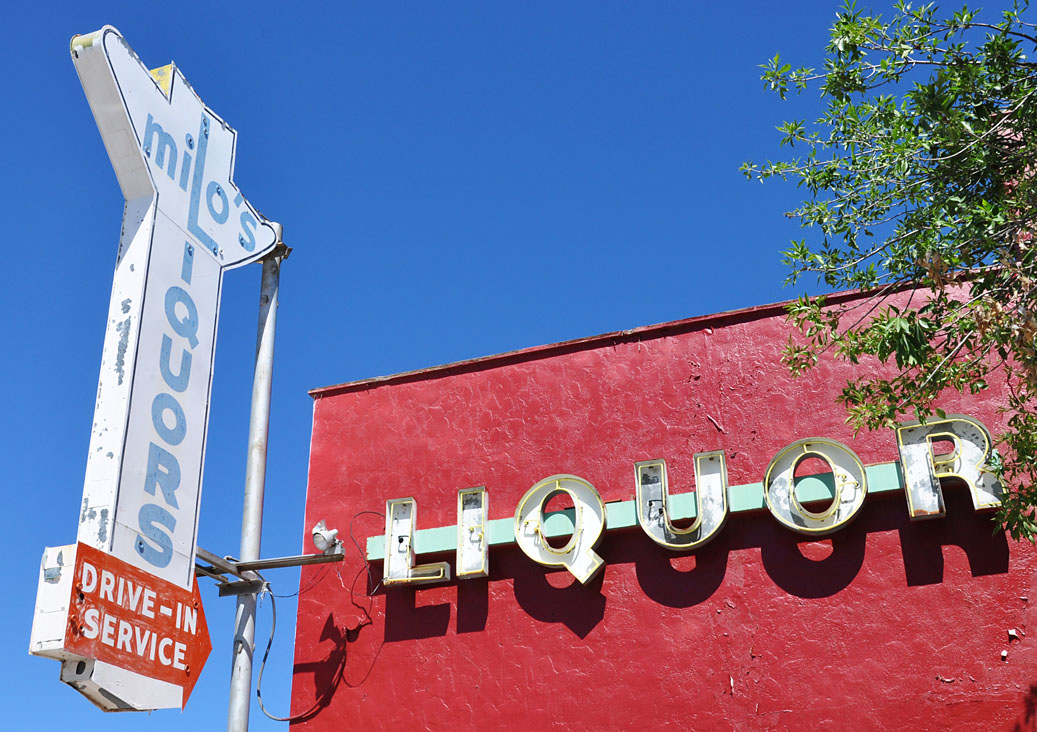 I had to walk through a car show to shoot something in Willcox so I shot this one for you.  I’ve never seen a split hood like this — pretty neat:

But I liked this vehicle that wasn’t in the show even more.  Never seen such a thing.  Could it be customized?  Behind the big window is a bed-like set-up.  But you’d have to be my size to fit:

One of my main staples lately — maybe one every other day — has been the Gas Station Burrito.  This one was particularly great with the crunchy tortilla.  Normally, they come wrapped in foil — which is fine, too.  Just a softer and usually spicier approach.  Hard to screw up beans and cheese.  Though most of the time, there’s beef or chicken in there so I’m out of luck.  The crunchy tortilla was almost like pie crust — yes PIE — I haven’t forgotten.  The taco stand burritos that I grew up on in Southern California had rice and lettuce inside.  And if you paid extra, sour cream.  But nothing wrong with this simplistic approach: 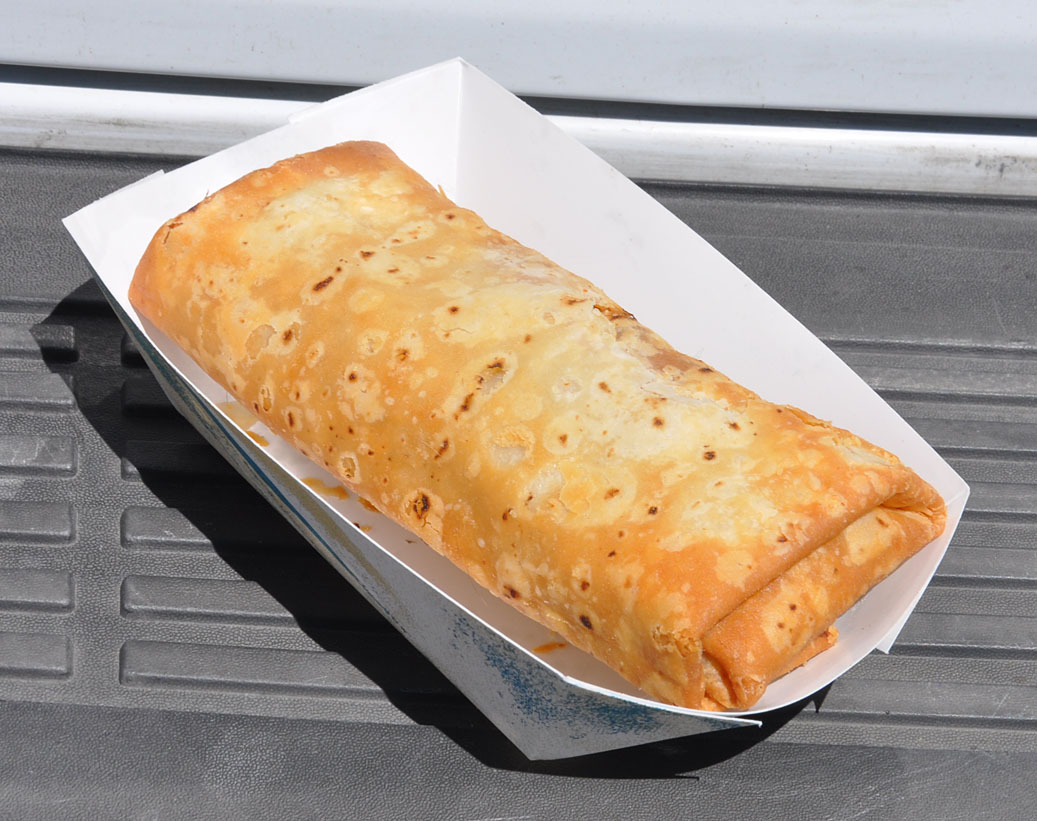 A couple from Bowie.  I don’t know what happened to this sign:

One of the most intriguing signs of the whole trip to me.  Never seen such a thing.  Surely, the thing must have spun — and there are lights on both sides: 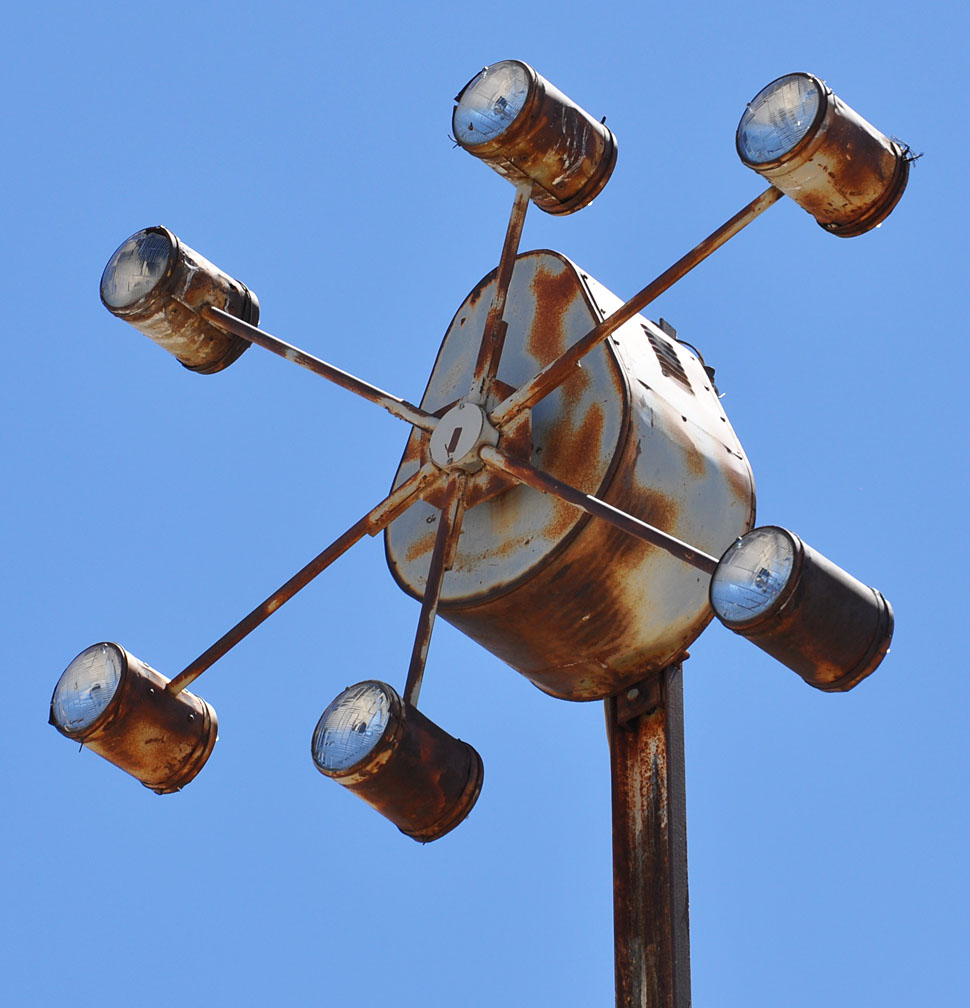 I’ve been getting a lot of emails about my “process” lately — how I find so many things, how I put trips together, etc.  Most of those questions will be answered by the pages with links on the right below the calendar “how to plan a roadtrip”, etc.  I need to update them slightly at some point.  For instance, I remove the yellow stickies before these trips now since it just gets too messy.  Once the route is firmed up, I just draw a big circle around the city and then draw crow-flies lines between them.  This helps me stay focused on what’s ahead, plan for where the day will end more or less, or shift things around a bit if needed.  Then I just scratch out each city as I finish it — a feeling of accomplishment.  And then I just buy a new atlas every couple of years.  Here’s what I’ve done to part of Arizona:

Another “perfie” — a perforated cone thingie on top: 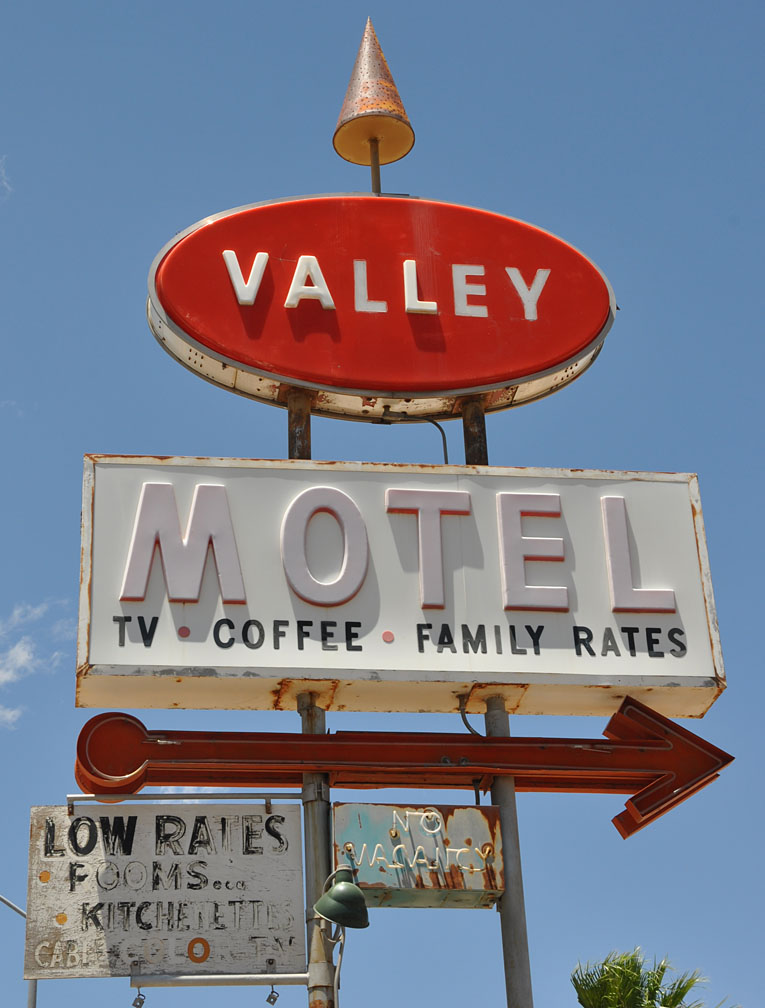 From Thatcher — the Infamous Bar & Grill: 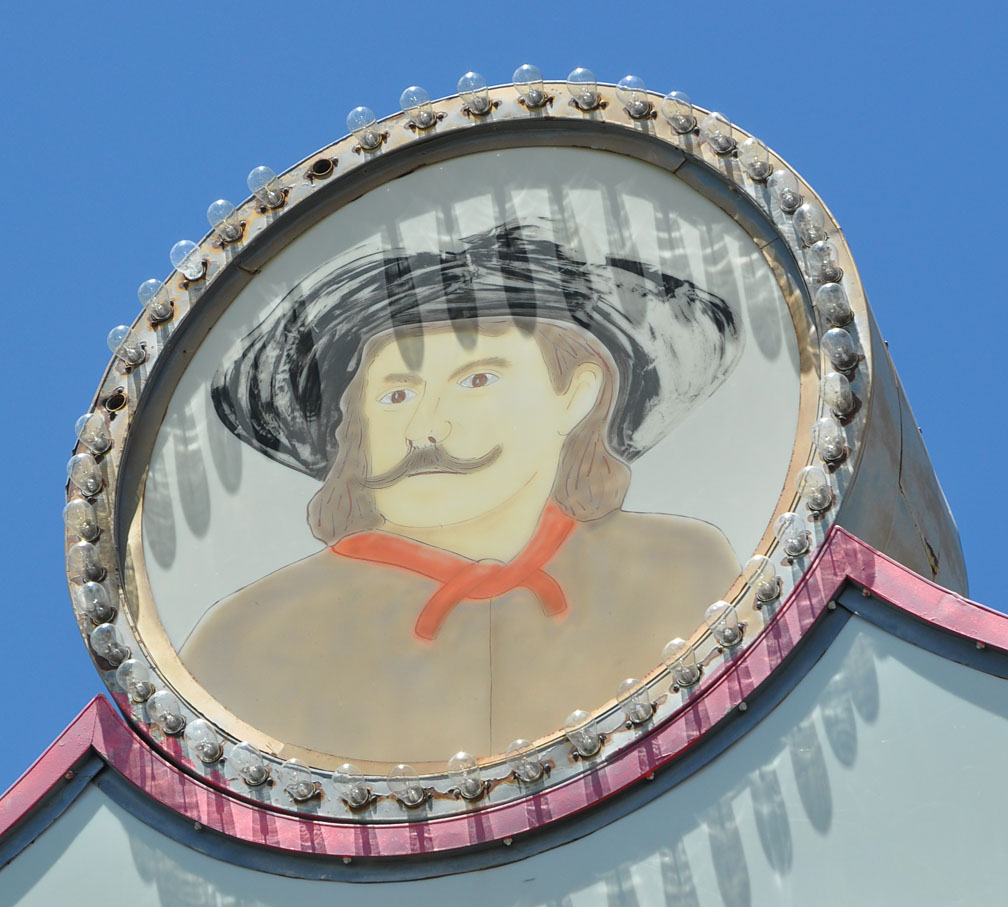 On to Globe.  This rolling pin sign seems to be attached to Chalo’s Casa Reynosa Mexican restaurant.  Maybe symbolizing rolling the tortillas? 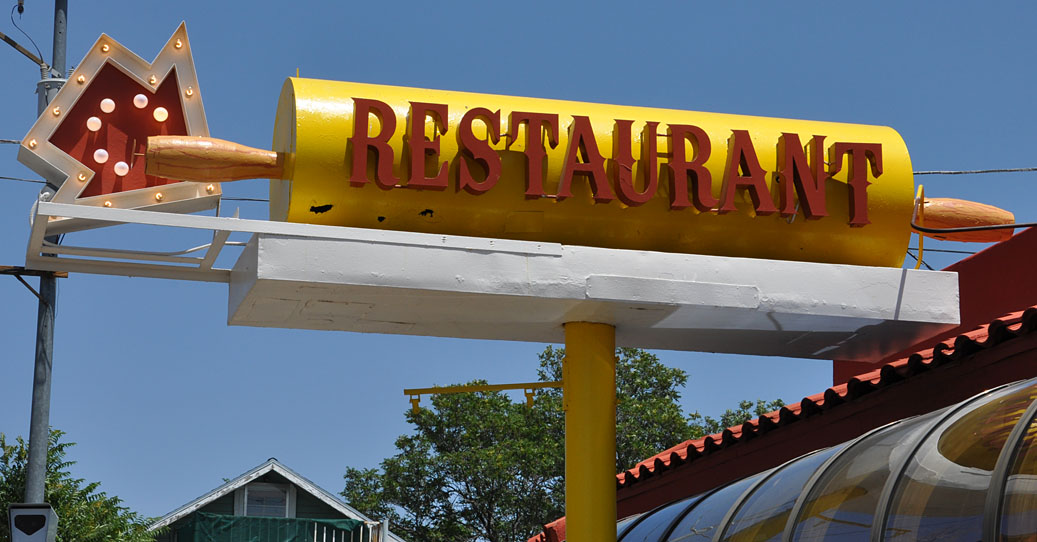 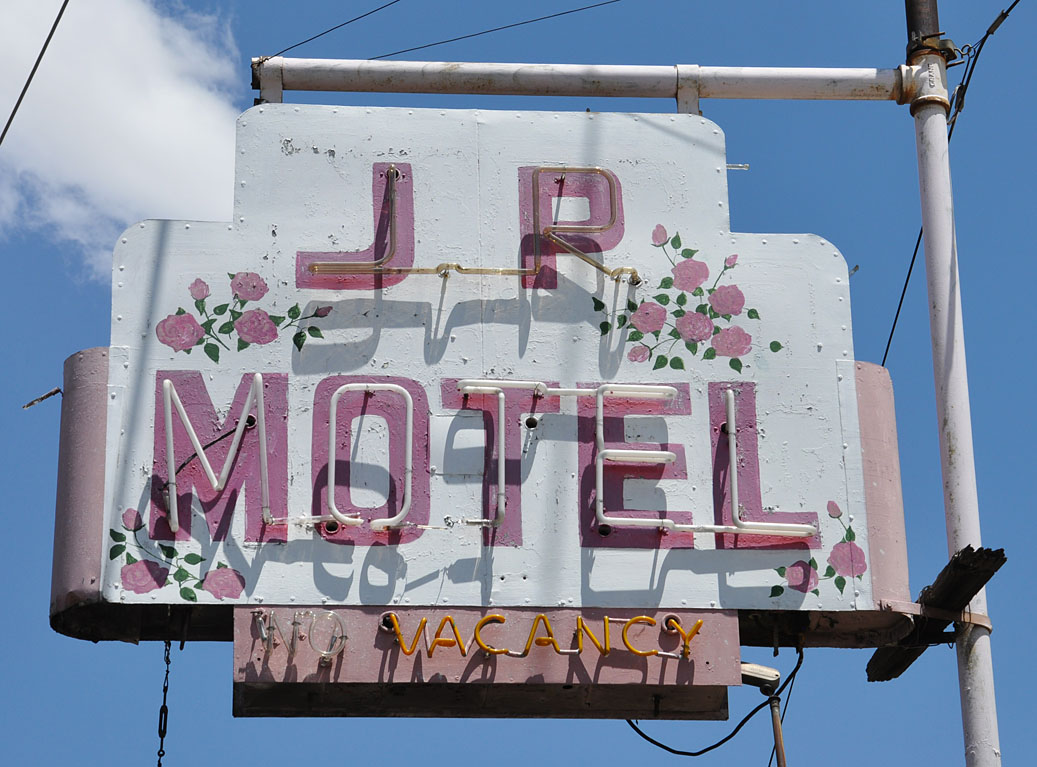 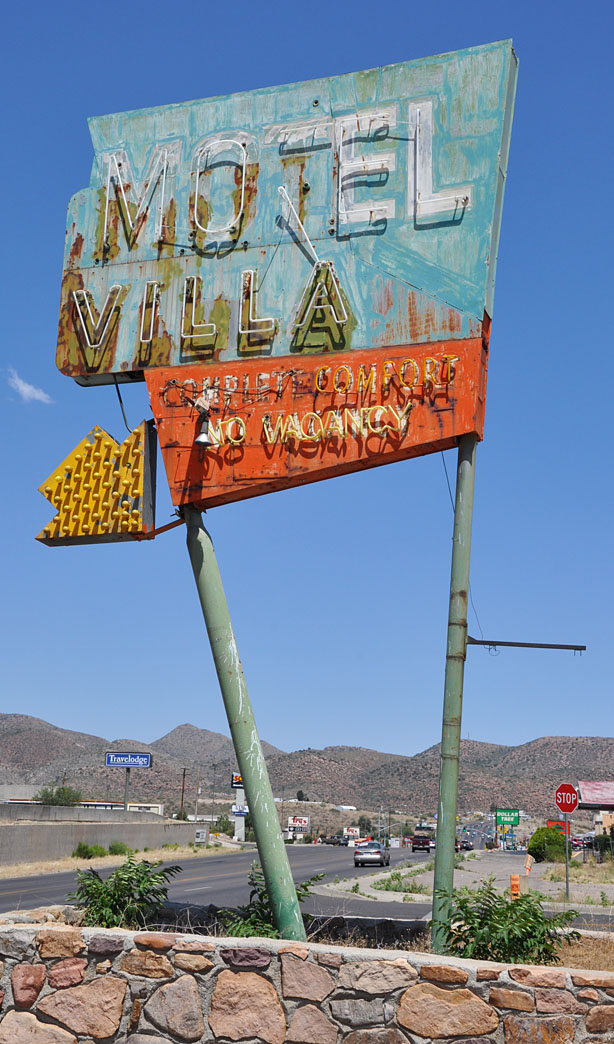 From Miami.  It doesn’t get much funkier than this.  Looks like Traveler’s Motel originally:

Same building, around the side:

And, last one for the night, from Williams.  A nice bright & cheerful sign:

According to my calculations, I should be able to wrap up Arizona tomorrow.  Then I’m debating about what to do for the next couple days.  I want to be in Cincinnati to do some shooting on Thursday.  That leaves roughly three days — which has to include a hefty amount of interstate time as well.  I will probably do some of my Colorado pack which I have with me  — maybe a day’s worth.  And then a little Kansas City that I brought along.  Or I could be wild and crazy and head to Vegas which is very nearby — but that will probably wait til next year en route to California.   If I whack out some of the Colorado stuff now, then I can probably sneak in some Utah and/or Montana stuff this summer.