Today was a rough one — but worth sticking it out through the gloominess and downpours.  I’m glad I didn’t bail for home.  The day began with alternating rain and fog and clouds.  So if grey is your favorite color, you’re going to love this post.

Sure enough, the building was still there:

Just as I finished taking photos, the owner popped outside to see what I was up to.  He showed me this old postcard which was taken around the time the station was built (circa 1937):

Note the tower and detail above the door that were gone by the time of primemover’s photo.  The owner told me stories of the lunch room (on the right behind the pumps) — and just out of the frame at right – a bus station building that’s gone now.  He said that there were heated underground pipes that extended over the whole lot in front of the station that kept it free from snow.  The building is for sale now and I’m really hoping it finds a use soon.

Here’s a fun one from Alderson.  In case you don’t instantly know what that “sculpture” is… 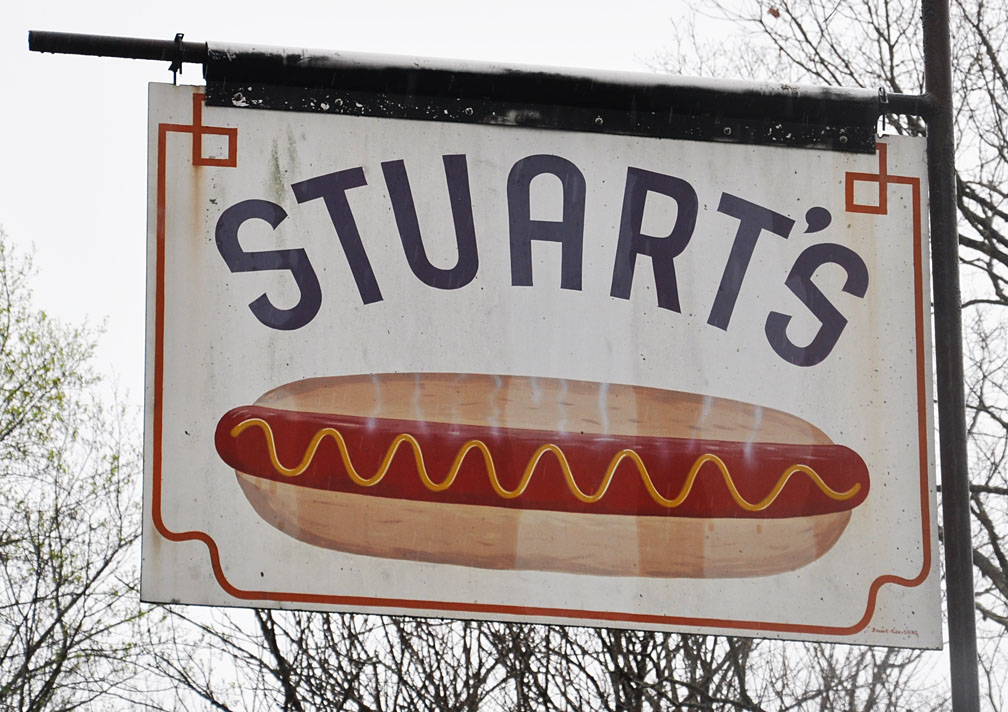 A distressed Deco building in Ronceverte:

The Beer and Eat Tavern in Lewisburg:

Time for a break from all this roadside overload? 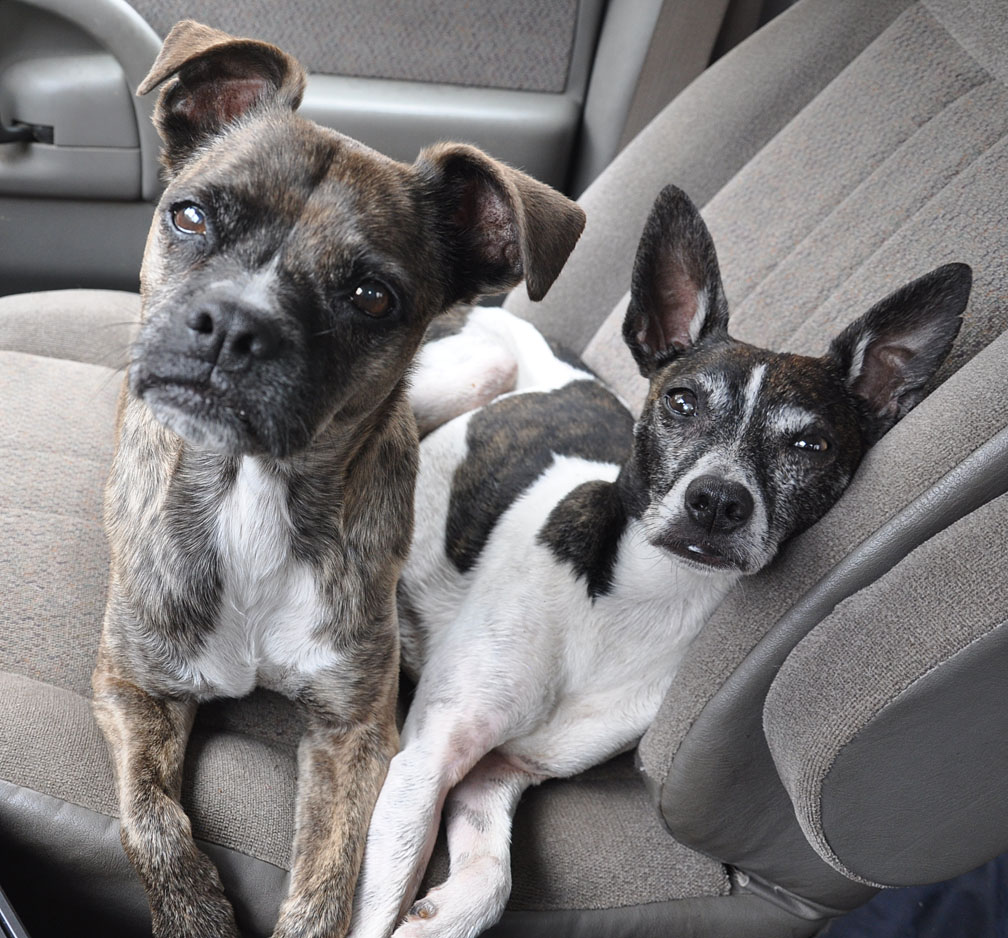 A pitstop in the Monongahela National Forest.  If you haven’t been introduced before — here are my four roadies, left to right:  Fix, Gremlin, Sputnik & Gripper.  Yes, there a huge part of every roadtrip.

Nik is the wacko; Grip is the wise old owl.  Grip’s faraway look is because she’s blind — and listening to my every word:

Nik is addicted to running and balls.  Here he’s doing laps while Sparkle airs out:

Grip has been overly rewarded (treats) for her jumping trick.  Seems every time I turn around, there she is boing-ing away.  And of course, I have to reward some more.

Here Grem is digging her way to China in search of some critter beneath the ground.  Which is far better than trying to run away to China (too many heart-stopping episodes on earlier roadtrips that some of you may recall): 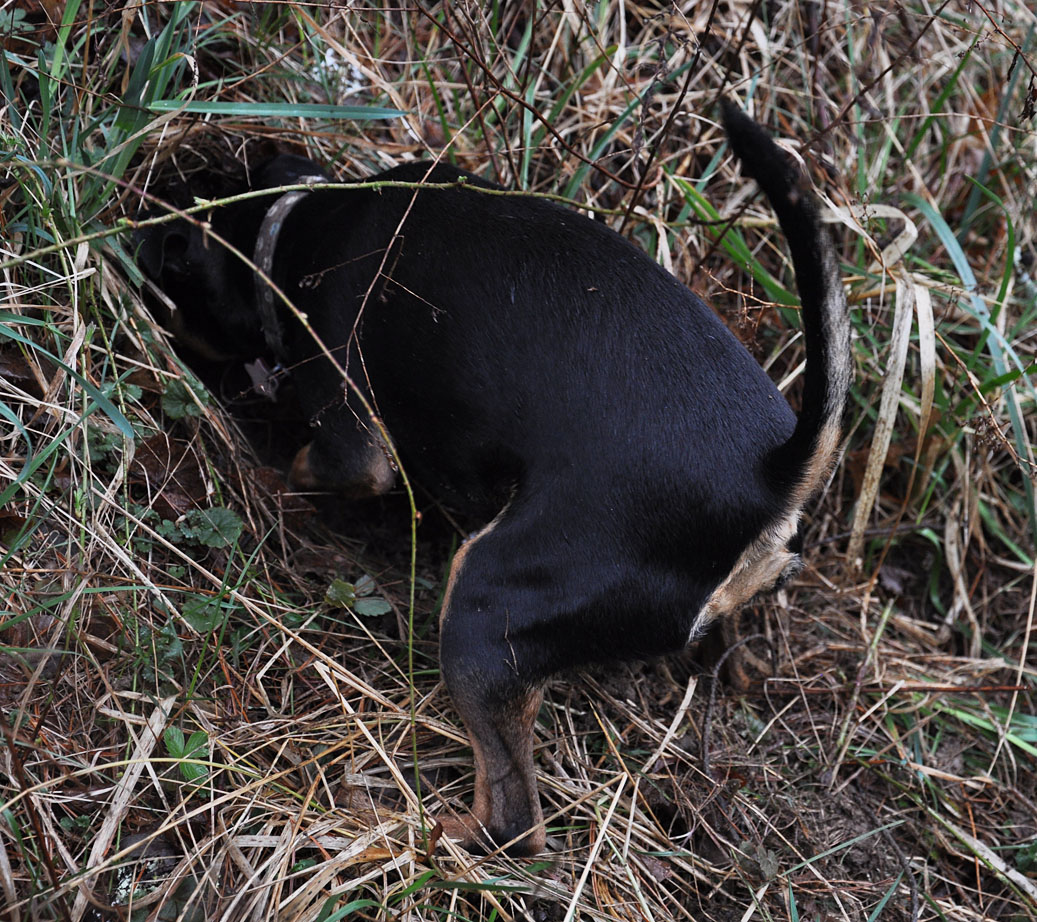 and Fixie waiting for us in the van.  “It’s cold and damp — I’ll just wait right here.  You guys go ahead.” 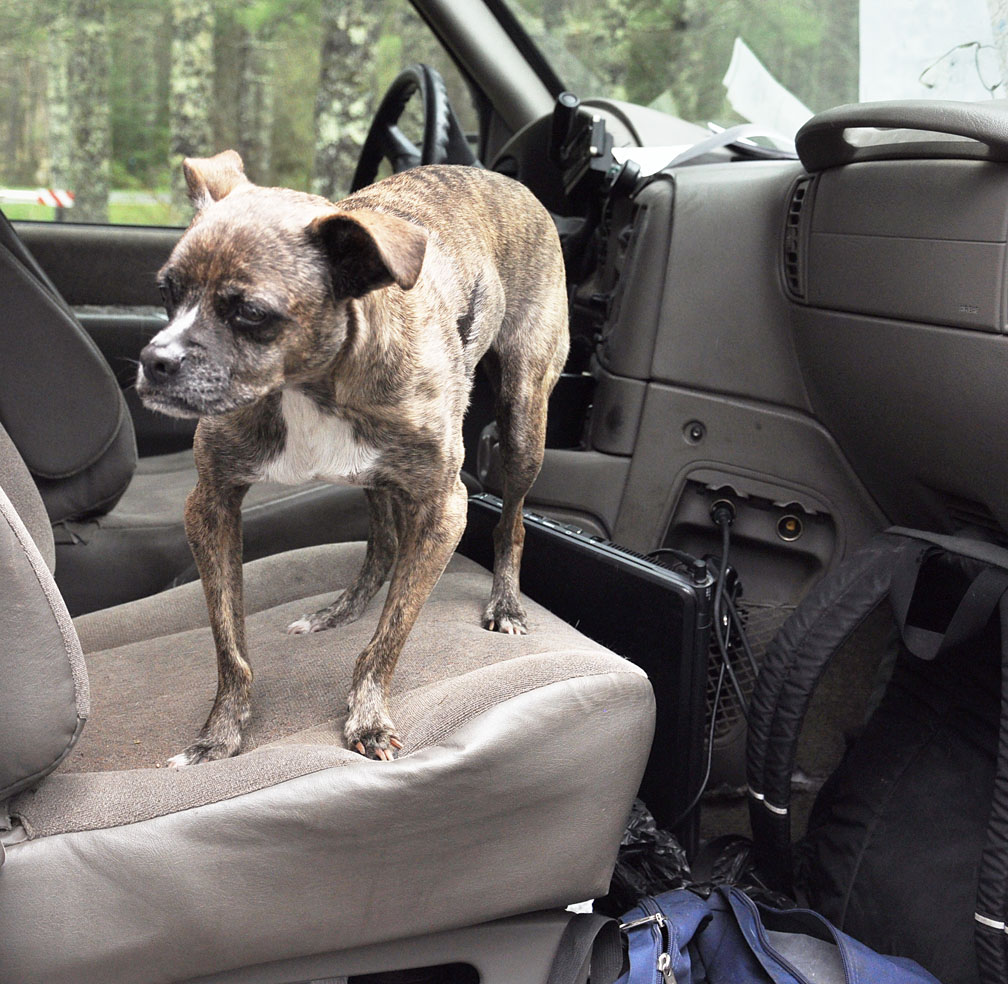 In the afternoon, the skies turned blue.  But of course, deep in the mountains, I was near nothing photo-worthy for a couple of hours.  And by the time I got to my “subjects”, there wasn’t much daylight left.  I have no idea about tomorrow’s weather.  What does 50% chance of rain mean?  It means they haven’t a clue.

More dreariness.  From Northfork — the Algoma Coal and Coke Company Store from the 1940s.  Later a health clinic, but now abandoned.  On the National Register… but not looking good.
http://en.wikipedia.org/wiki/Algoma_Coal_and_Coke_Company_Store 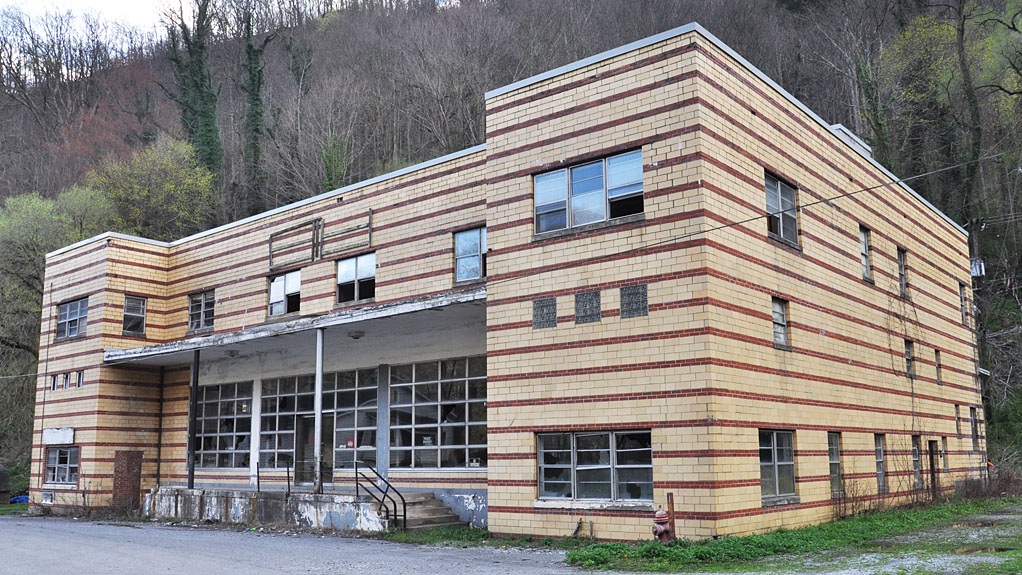 And so, the other downer of the day.  In the late afternoon, Sparkle’s “check engine” light came on.  Well, that’s why I’m doing this test trip — to work out any kinks, right?  The blood drained from my body since I was deep in the mountains.  But 98% of West Virginia seems to be deep in the mountains and nowhere.  Nothing I could do but hold my breath.  After about an hour, I reached civilization.  But civilization does you no good when it’s 4pm on a Saturday and there are no mechanics open.  And I didn’t notice any Sears or Firestones or those other handy weekend alternatives anywhere.  What can you do, but just keep a-going.

And just what does “check engine soon” mean — like in the next ten minutes — or like next week sometime?

But everything seems absolutely fine and normal.  No change in sound, feel, power – nothing.  Temperature gauge normal.  I checked the oil — perfectly fine.  So I’ve driven for several hundred miles and maybe four hours now — nothing.  I’m thinking it could be what happened before:  bad gas (I have a full tank) — or some false alarm thing.  I’ll be on the lookout for a garage of any sort tomorrow.  Surely, Huntington must have a Firestone-y place open (off to Google search after this blog post) on a Sunday, maybe.  Or else I’ll just have to grip that steering wheel and drive us back to Brooklyn with that damned light staring at me tomorrow night.

Which brings us to the end-of-trip reminder.  Since I’ll be interstate-ing it back to NYC after tomorrow’s shooting, I won’t be uploading/posting to Flickr or the blog until I get home on Monday.  Or more likely Tuesday.  I’ll shoot a quickie post on Monday morning just to let you know that we survived whatever mechanical crap has developed and have landed safely back home.

Let’s close with this sign which is appropriately what I need right now after a full day of gloomy skies and car-stress.  I’ll give you two versions since I’ve exhausted my decision-making skills for the day.  I’m usually a tight cropper — but you all would probably prefer #2 which is more in context.  Nighty-night… 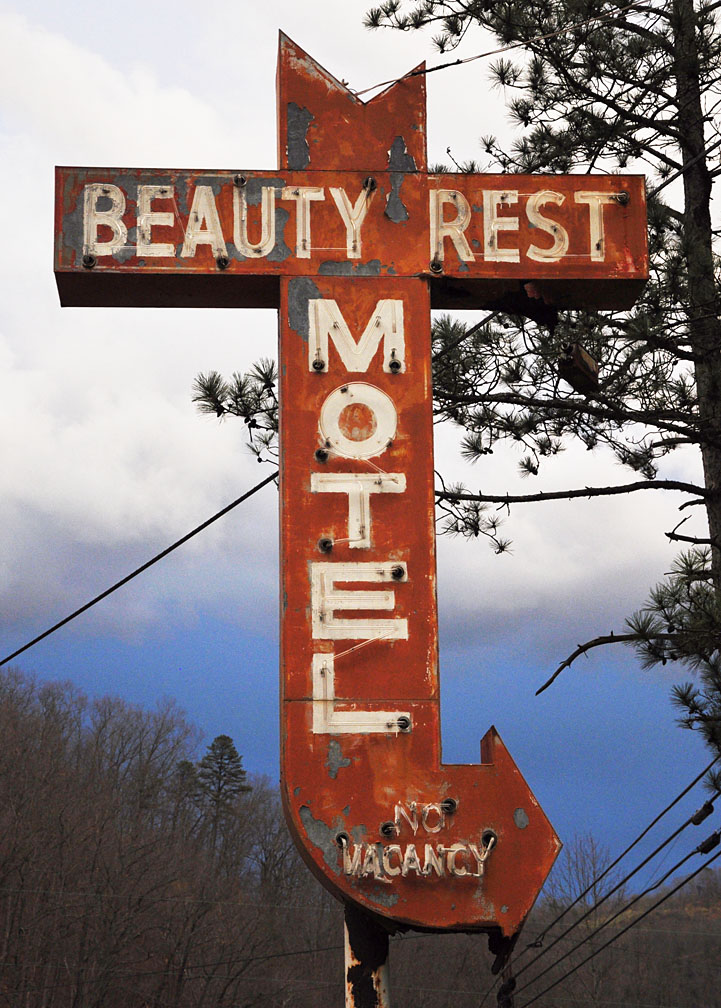