Hey there!!  How have you all been?

The dogs and I have been prisoners of The City for five long months.  Time to get out & make sure all is well with Sparkle (the van) and Dee (the camera) before we head off on a 39-day trip to NM & AZ at the end of April.

So.  West Virginia has been on my list of Most Neglected States for a while now.  I’ve shot some stuff here before — but not in a long time and not in any major way.  I only have four days before I have to get back to work.  And I hear that the weather may turn nasty/rainy on Saturday & Sunday.  Which might send me home early.   But let’s make the most of what of it.

The statues in the photo above are probably immediately recognizable to most of you roadside fans.  They are installed next to Roadside America in Shartlesville, PA — and wave to motorists on I-78.  It was foggy and just barely light enough to shoot them this morning.

As usual on these trips, I got off work at 2am and hit the road at 3am.  Only two hours of sleep at a closed gas station in PA — determined to get to WV when the sun came out.  So I won’t be writing any memorable prose tonight.  Got through today on adrenaline and Sheetz coffee — tomorrow night’s when I’ll really feel the pain.

Before we dive into some of today’s photos, let me start with the usual notes for the newbies on the bus.  All the photos here at my blog are “clickable” (when you click on the them, you get a larger photo).  I post nightly during these roadtrips to both Flickr (the agilitynut account) & this blog — different photos in both places.   After cropping & tweaking some selected photos, I post to Flickr first (usually 10pm or so) and then start working on the blog (usually posting after midnight — or if I pass out, the following morning.

On to today… Foggy and grey this morning and then lots of sun.  And heat — 87 degrees or so according to the bank clocks I saw.  Loads of spring flowers and trees in bloom — white, yellow, pink purple.  Don’t blink — this is gonna be a quickie spring it seems — after the Winter That Wasn’t (thank god).

OK then — on with the show.   A few shots from Martinsburg, WV:

At first glance, I thought this might have been a former Fotomat — but the roof is wrong — and the building seems narrower to me:
http://www.flickr.com/photos/roadsidenut/5653617580/

So, I don’t know if this was a rival photo developing place or something else.  Just maybe always a hot dog place — the letters seem funky and old enough:

A two-fer:  a former gas station and a giant crab:

I don’t know what the deal is — this firefighter statue stands in front of a Goodyear Tire store in Charles Town:

The Hayfield Motel (in Hayfield, VA) —

The rooms have individual parking bays.  Perhaps, there were originally garage doors.  The roofline is a neat feature (click to enlarge):

From Shanks — this Coke sign is abandoned — no business at all below it.  Just overgrown weeds & trees —  and a ditch I almost fell in trying to get this shot. 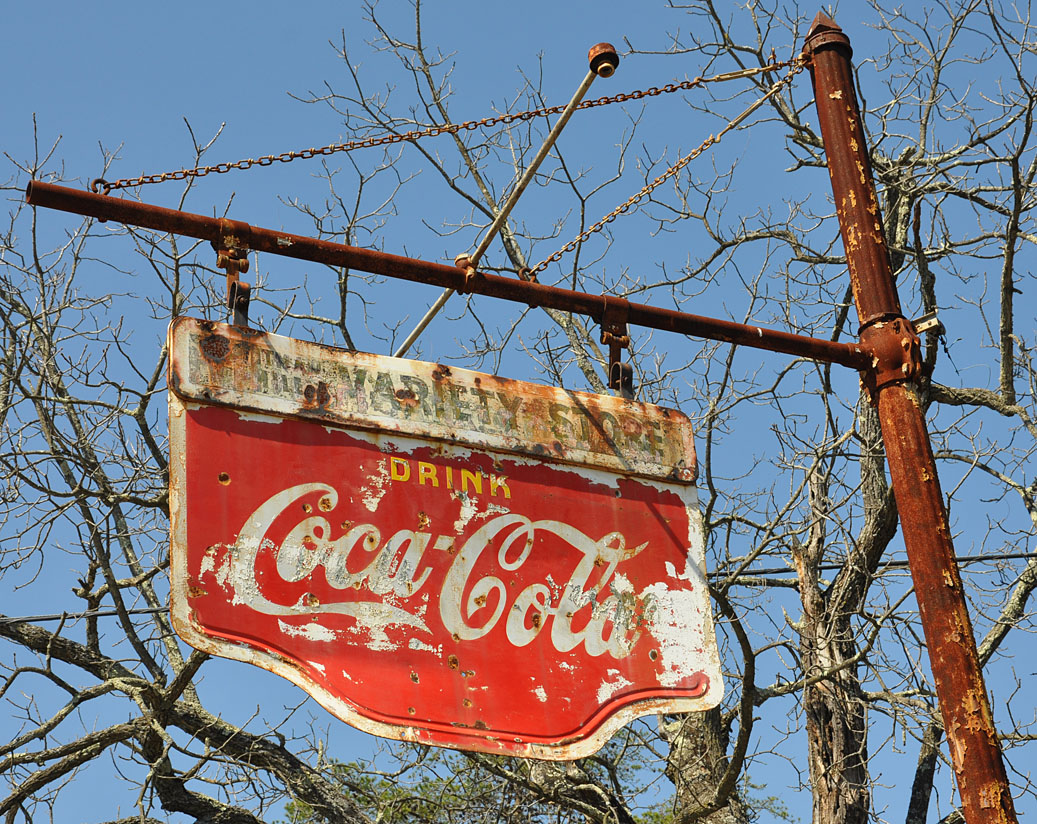 From Moorefield — Puffenberger’s (!) Jewelry.  The sunny side of the sign looked nicer — but that clock didn’t have hands like this side: 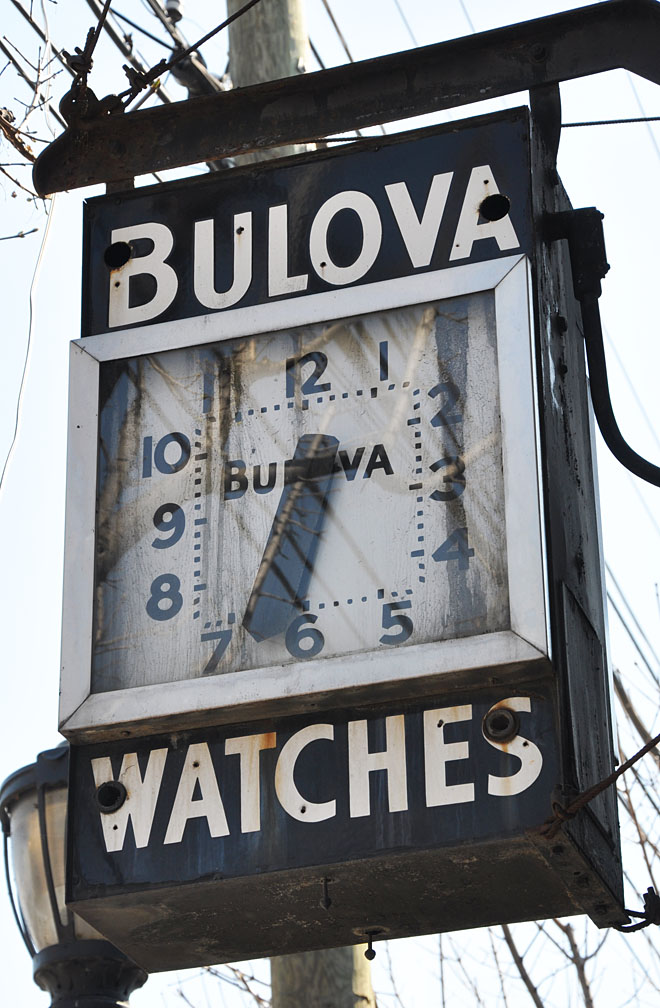 On to Seneca Rocks — a nice painted wood sign of an Indian Maiden.  At the Indian Village Campground — which is part of Yokum’s Vacationland:
http://www.yokum.com/

And lastly — in Franklin (I think) — a couple of most-likely rentable cottages — now appearing to be full-time residences.  No smaller than my NYC apartment — I could easily live here but would like a bit more acreage for the dogs to run.

That’s it for tonight — lights out.  Hopefully, more sun tomorrow.  On the agenda:  Charleston, more mountain cities and southern WV.  Til then…