The sunny streak might be over for a while.  Today was grey from start to finish.  Some temporary moments of brightness but I wouldn’t call it sun.  So settle back for some white-sky photos for this post.  The forecast isn’t much cheerier for the next few days.  All kinds of vague references to thunderstorms and high probability of precipitation.  This seems all very deliberately confusing to me.  When the forecast is “chance of thunderstorms”  — does that mean rain mostly all day?  Or sun and then maybe some heavy-duty rain for a couple of hours?  And when they say “40% chance of precipitation” — does that mean all day?  Or just maybe at some point there is a 40% chance of rain — but it might not happen at all?  All I can do is plow through my list and shoot what I can regardless of the grey or rain.  Because you never know what will still be around the “next time”.

No swimming for the kids today.  But it never really got that hot.  I seemed to find funky grassy areas without paw-piercing stickers pretty easily.  We were in the middle of nowhere for most of the day.  At the end of the day, behind the Fried Pies place (hey, no cheating and going to the bottom of the post!), there was a nice big field to let them rip around one last time for the day.

Shall we.  The day started in Altus — so here’s a couple of sign shots from there.  The stores in this little L-shaped strip mall must have each had a mini neon scaffold sign above their businesses — now only the barber shop has one.  Some of the others had naked scaffolding.  This sign obviously had neon originally — and the colors would be much nicer with proper sun: 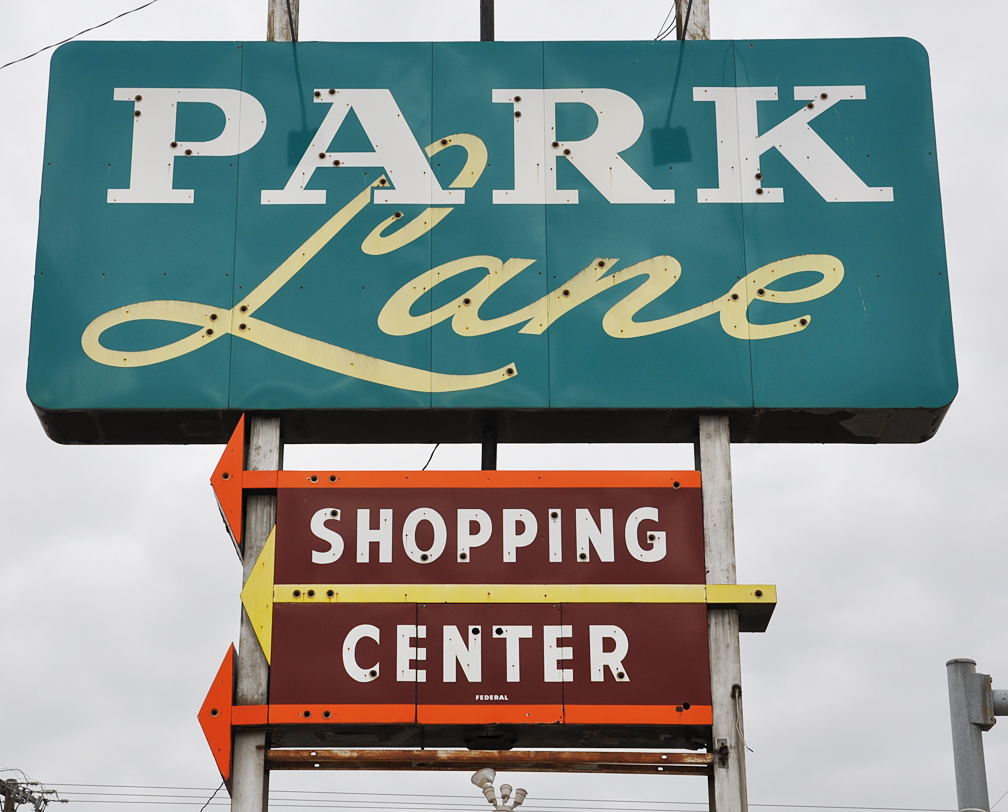 On the north end of town, another shopping center.   Probably always plastic lettering — but I could be wrong.  Maybe there were neon letters originally.  But my theory is that when they built this sign, they went for sheer size — after all, a much bigger lot than the Park Lane.  But bigger not always better, no real style here.  Still so much better than today’s shopping center signs.  And I bet those poles could stop a tractor-trailer. 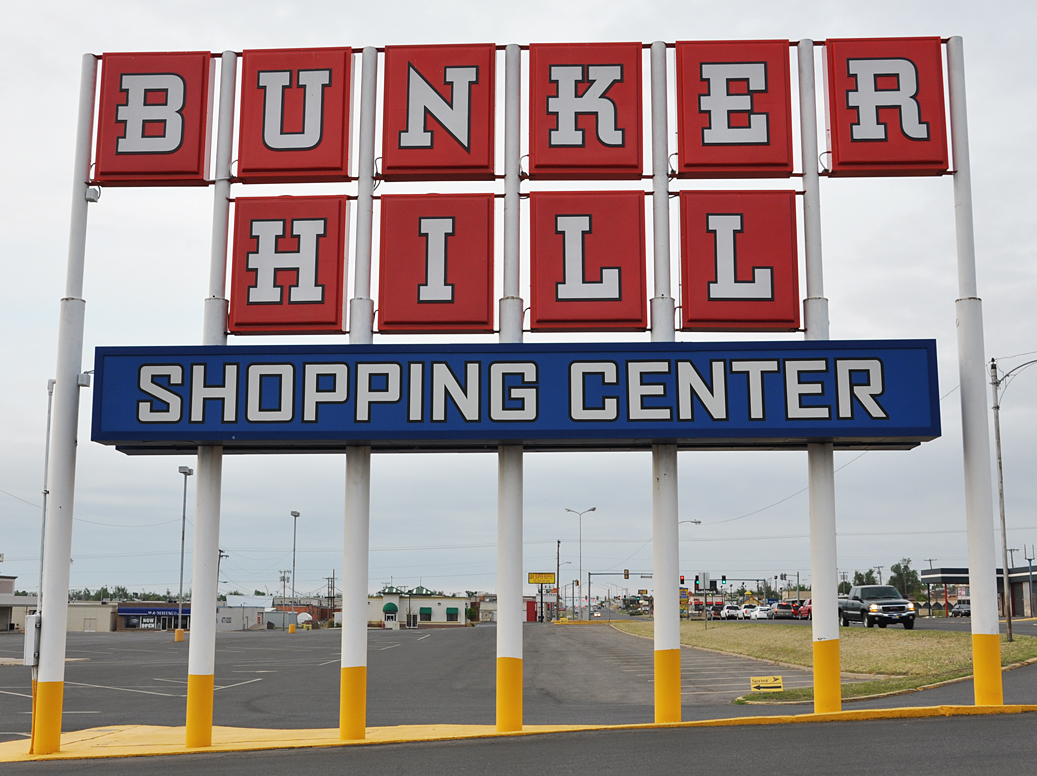 On to Cache — where a Burger Chef sign was reworked for an amusement park.  Eagle Park is obviously long gone.  I don’t know if there was ever a Burger Chef here or if the sign was moved to this spot.  Certainly no sign of a BChef building there now if there ever was one:
http://agilitynut.com/eateries/bchef.html 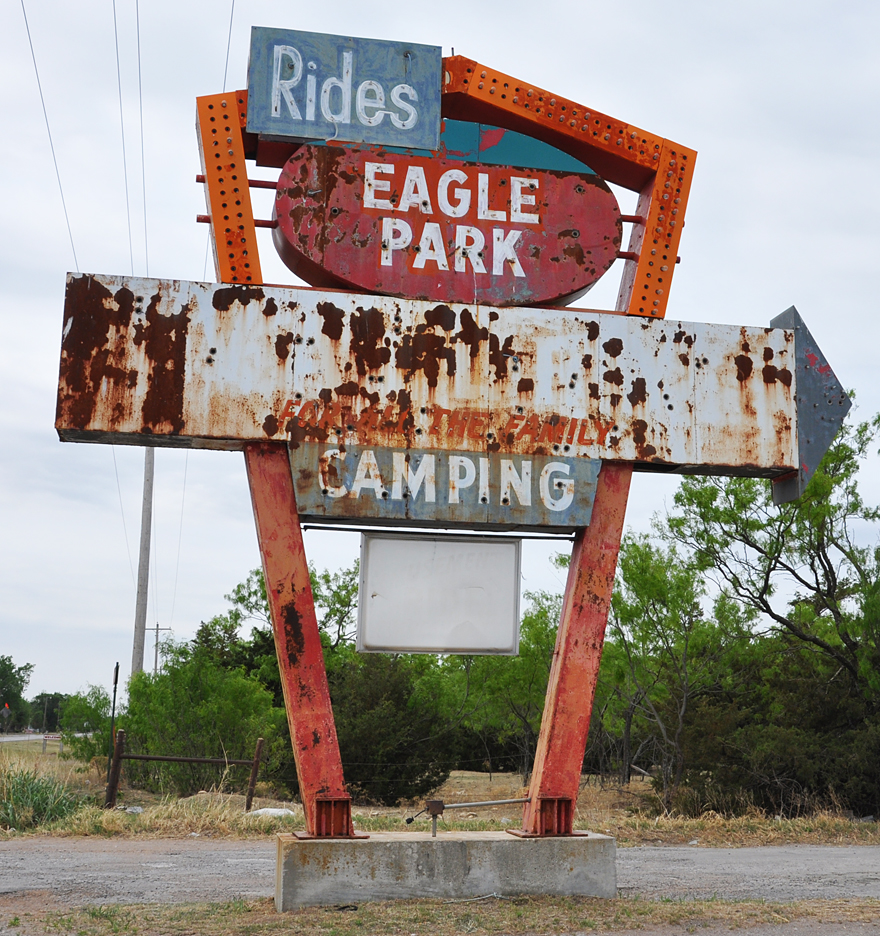 While I was in Anadarko, I saw some construction workers hacking away at a nice-ish mid-century building.  Very primitively banging off details with giant sledgehammery clubs (sorry, not up on the names of demolition tools).  It seemed to be part of a school.  I couldn’t bring myself to take photos.  And I feared they would be moving on to this place down the block when they were done:
http://cinematreasures.org/theater/16421/ 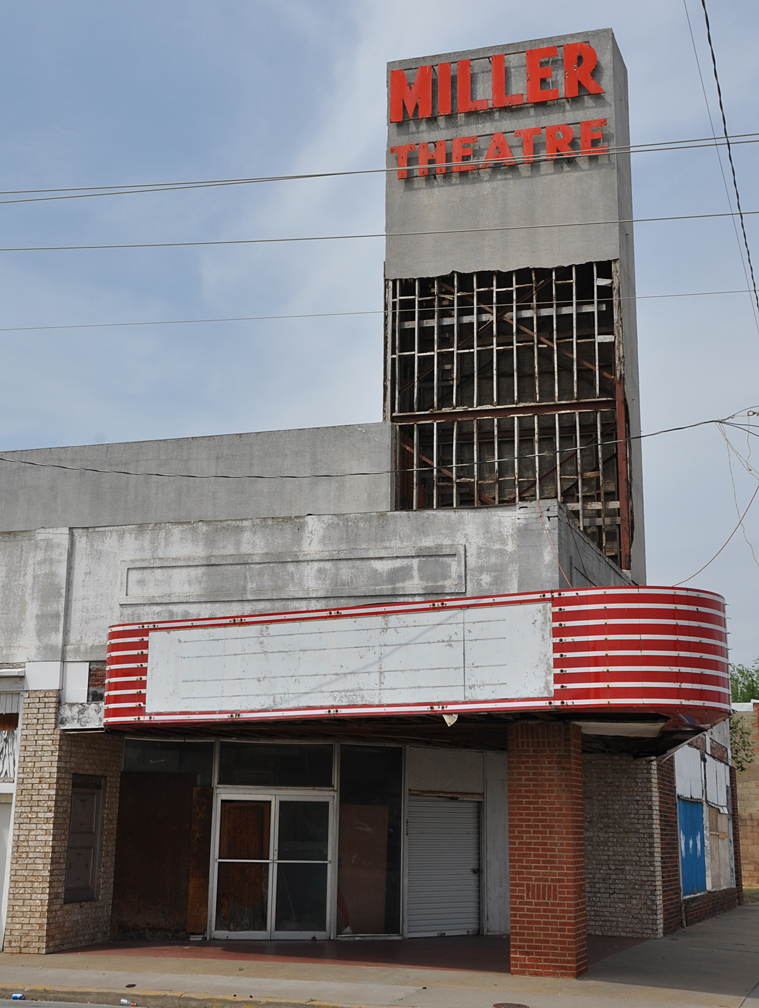 A couple of signs from Chickasha: 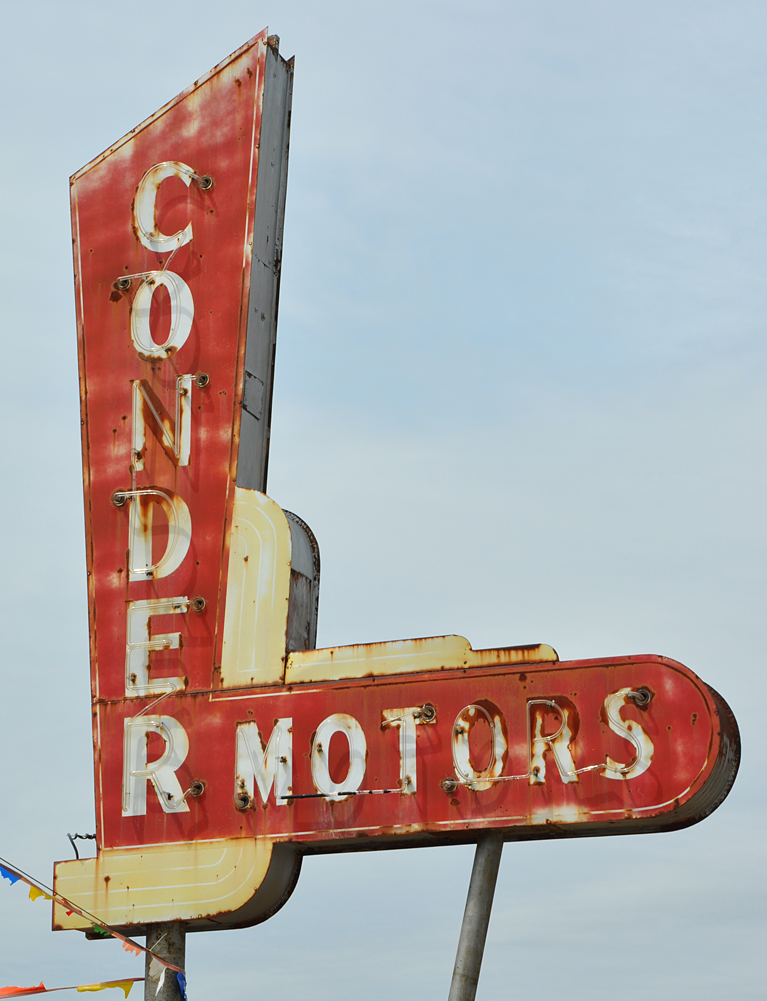 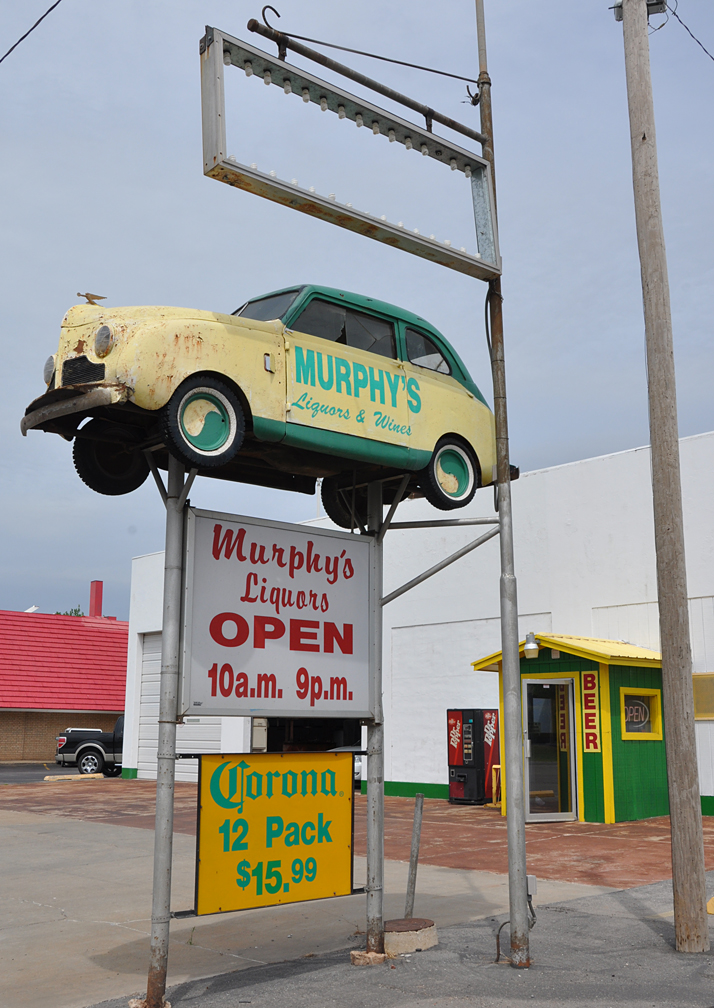 Also in Chickasha — the incredible Art Deco Grady County Courthouse.  I don’t know what building material was used — but I’ve never seen anything like it — note the shells in the third photo below: 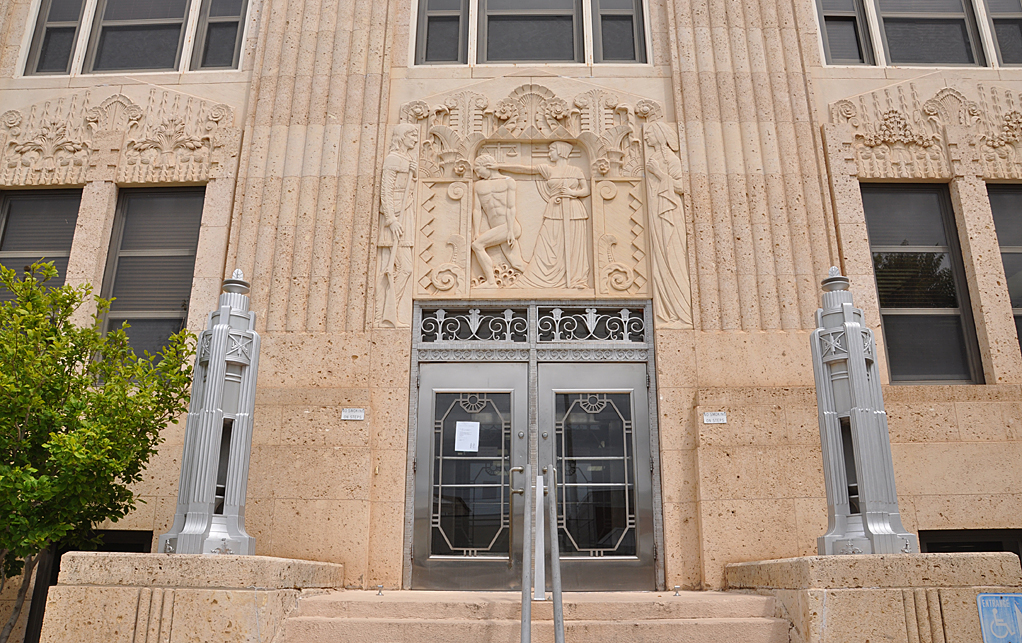 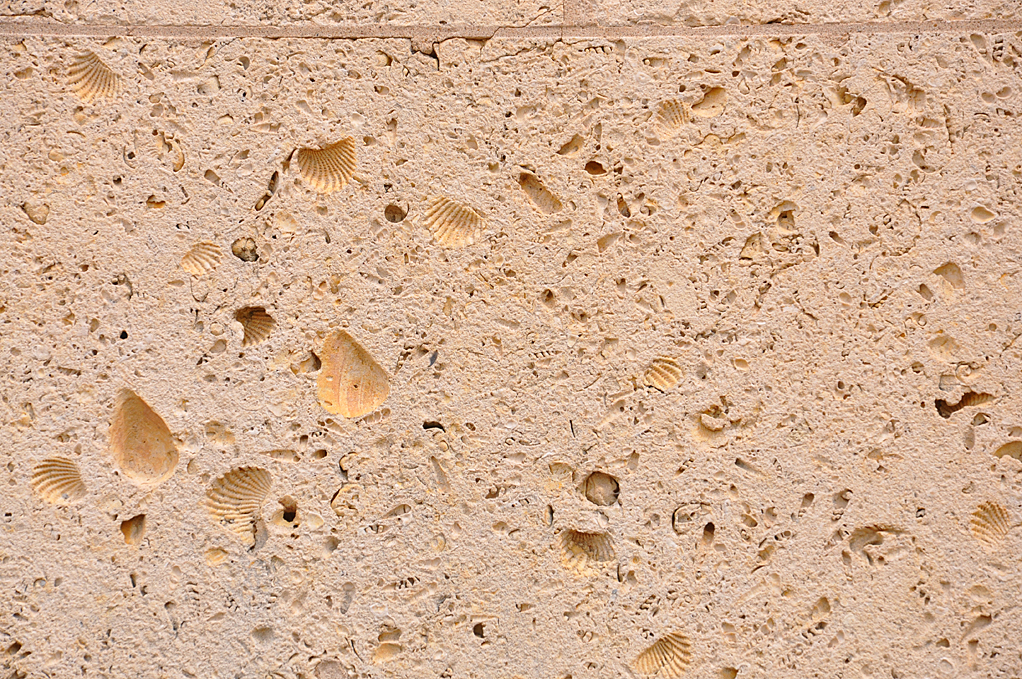 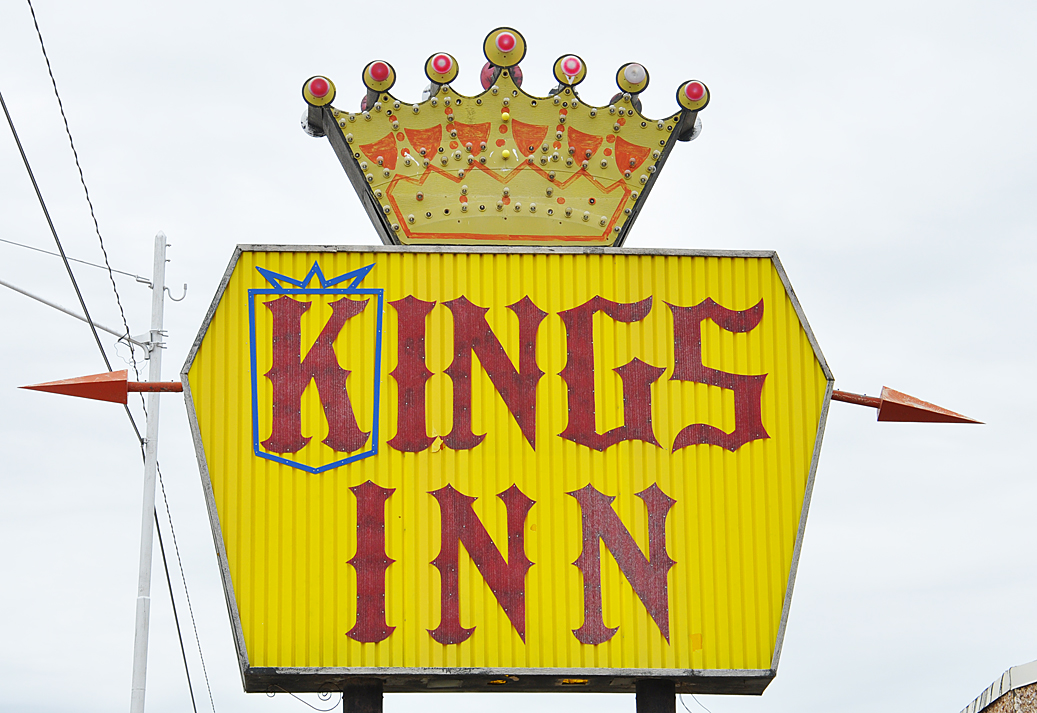 I went to check out Muscle Car Ranch in Chickashaw which I knew had some vintage signs and a Valentine diner (it actually has two).  Naturally, on a Wednesday afternoon, they were closed.  But looking over the fence, how could I help myself but find a little hole in the fence and do some trespassing.  I’ve learned to shoot quick and do a little jogging.  Half listening for a rifle crack and preparing to sweet-talk a Rottweiler or two.  A big property and I’d gotten about three-fourths the way around before I saw humans.  I took the initiative and immediately said I’d hoped I’d find somebody because I wanted to pay admission to the museum.  Don’t know if I caught the owner off-guard when I handed him a $20.  But really, I meant it.  I told him to use it to help buy more signs.  Here’s just a few of the photos of motel signs, dealership signs, gas station signs, etc.  More at my website eventually.
http://musclecarranch.com/ 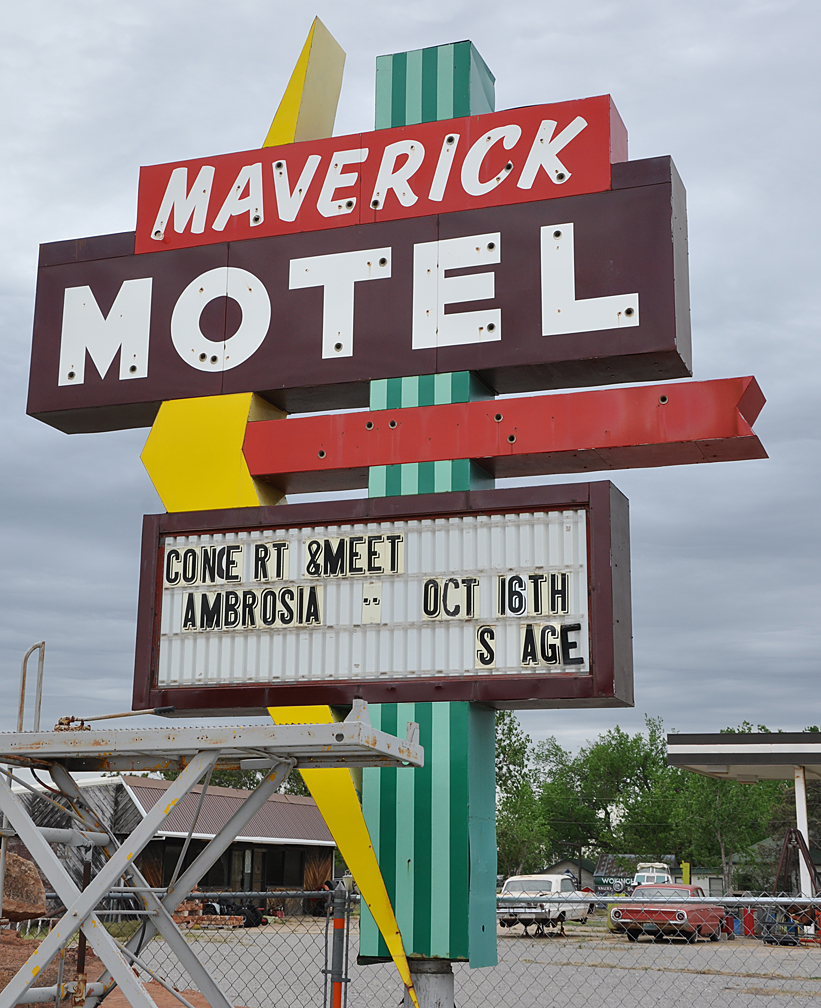 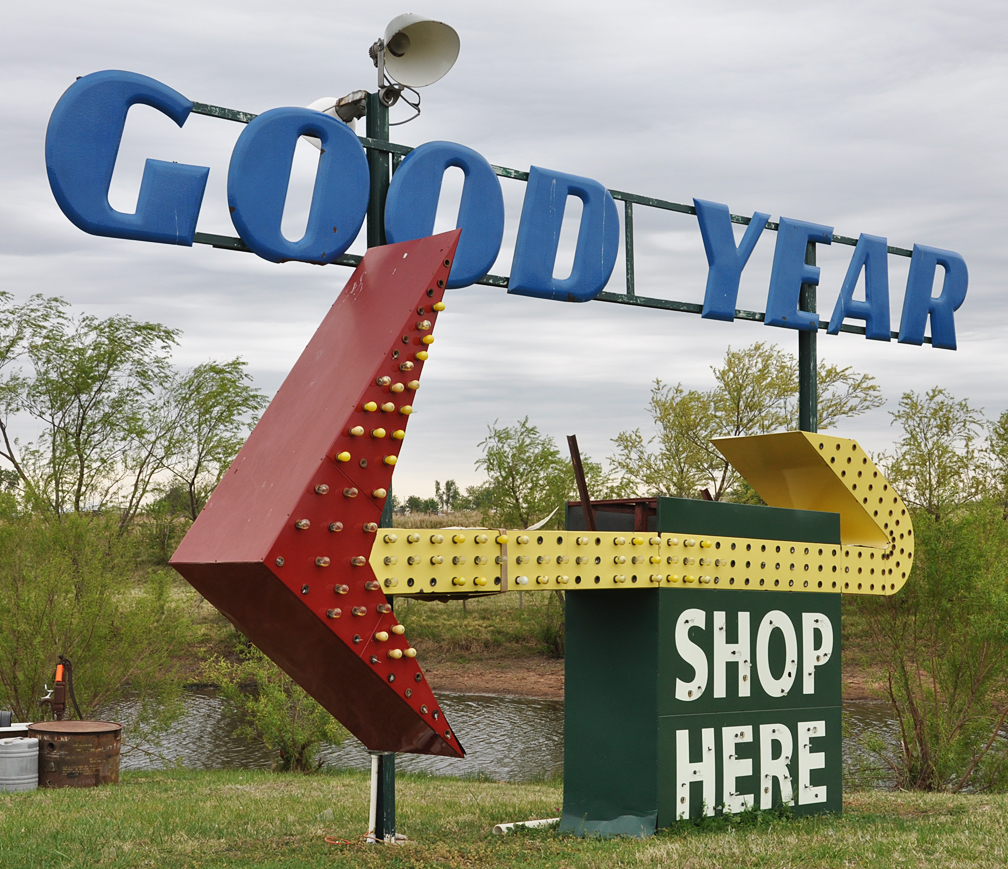 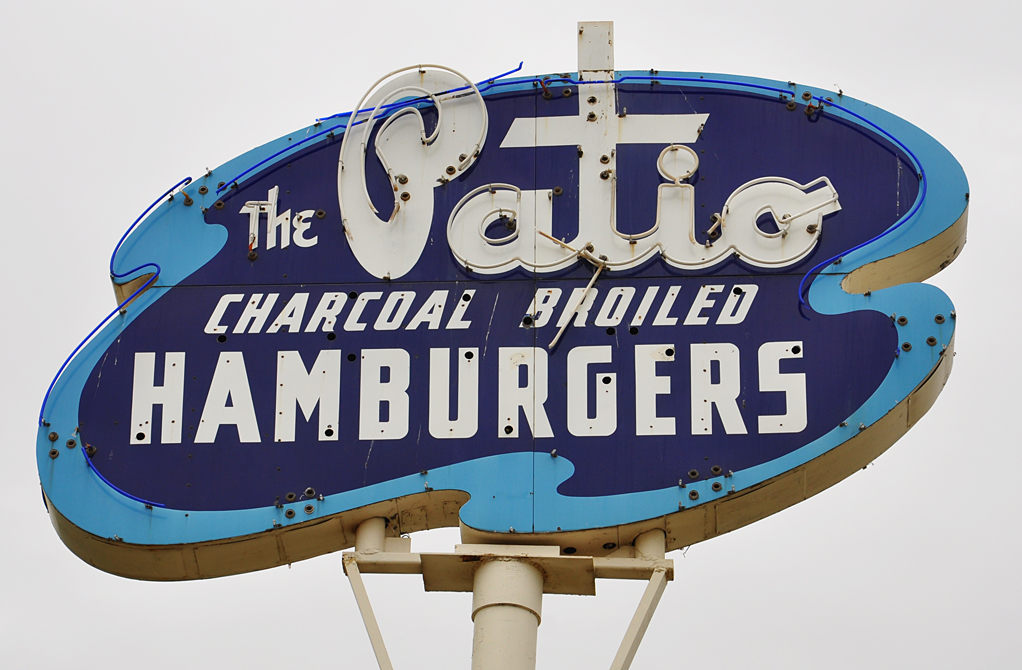 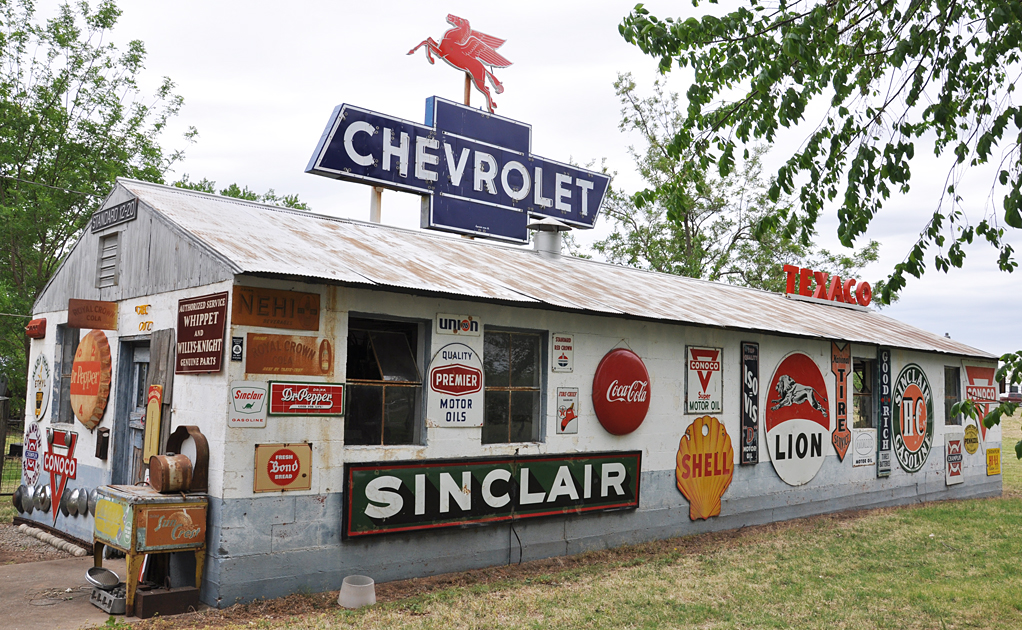 Moving on to Lawton — a strange little mid-century building.  I find it charming but I suppose lots of you would put it in the ugly category: 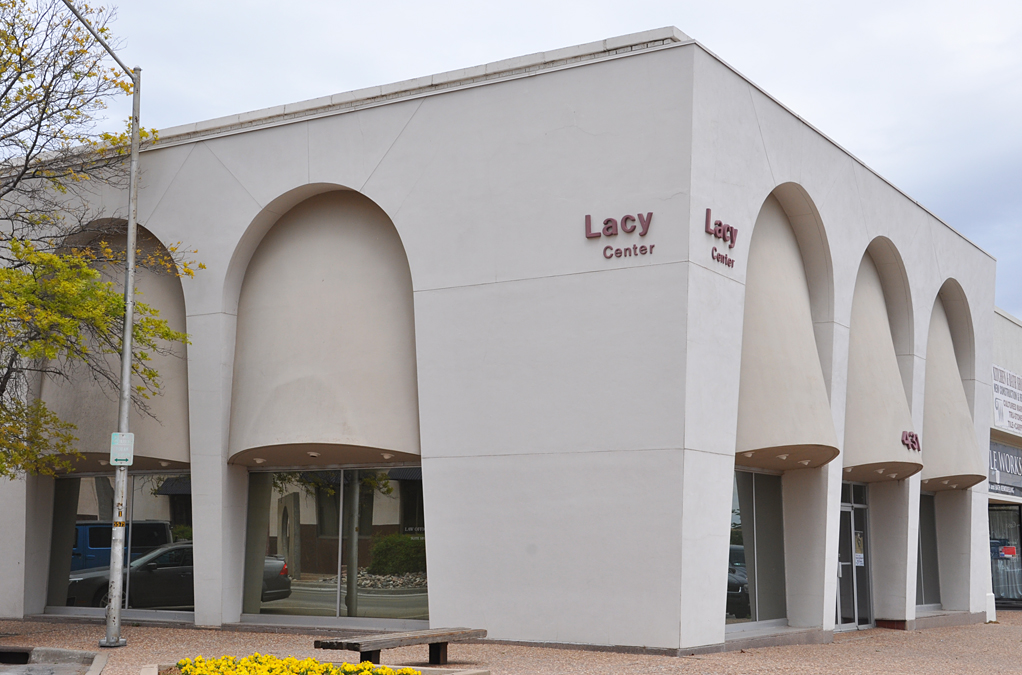 Still in Lawton.  I KNOW I’ve seen this sign before somewhere.  Repurposed here for a used car lot (and now for sale) but the canopies & building look like this was originally a drive-in restaurant.  Lawtonians — what was this place?  Or anyone else recognize this sign — which I think might have been mass-produced? 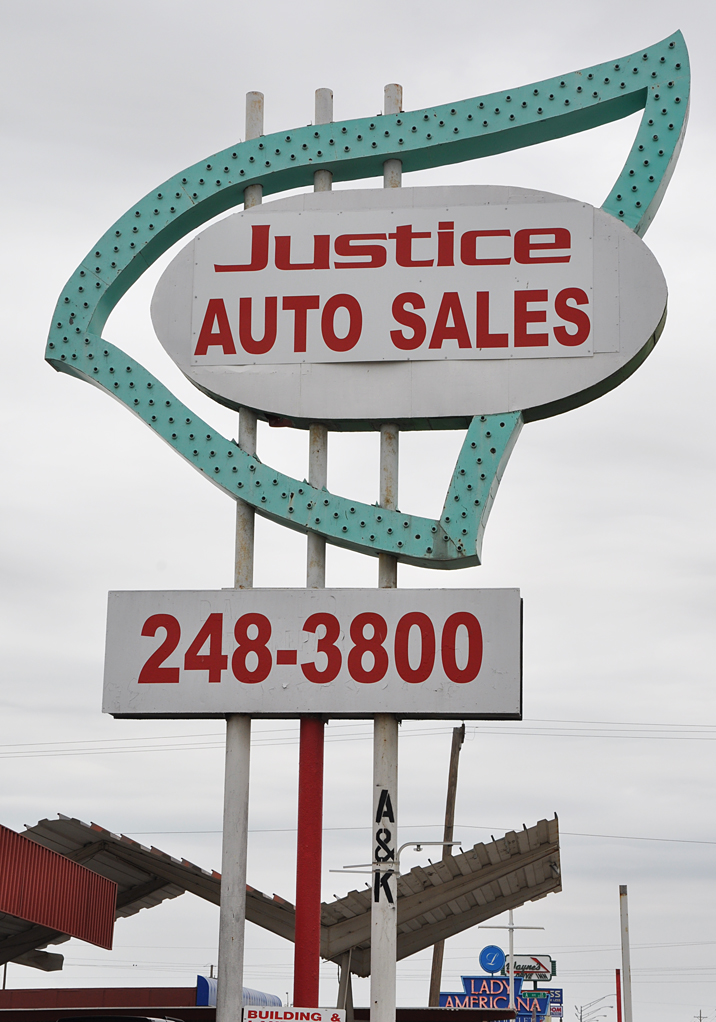 Tres shabby-chic, I know.  But that’s what this blog is for!  If you want pretty, go visit my Flickr stuff.  Although it’s pretty grey & drab there tonight as well because of the weather.  Anyhow, these snoozing Mexican is from Wynnewood: 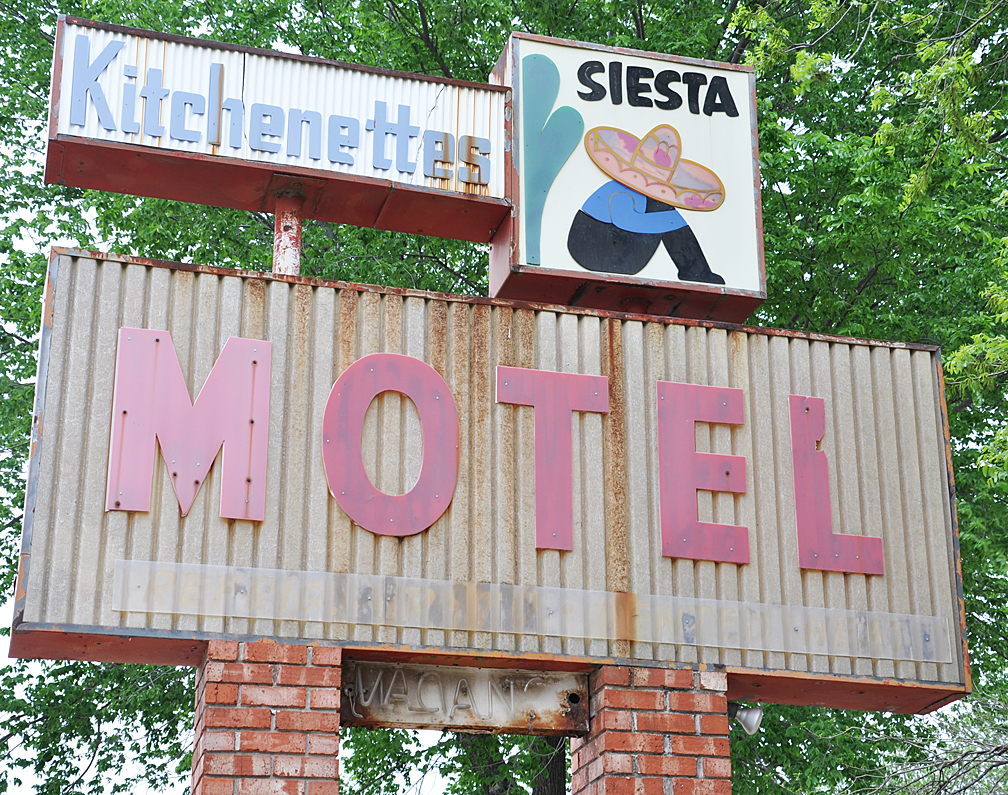 Also in Wynnewood:  a whole herd of freaky horses according to Gremlin who’s barking her head off here: 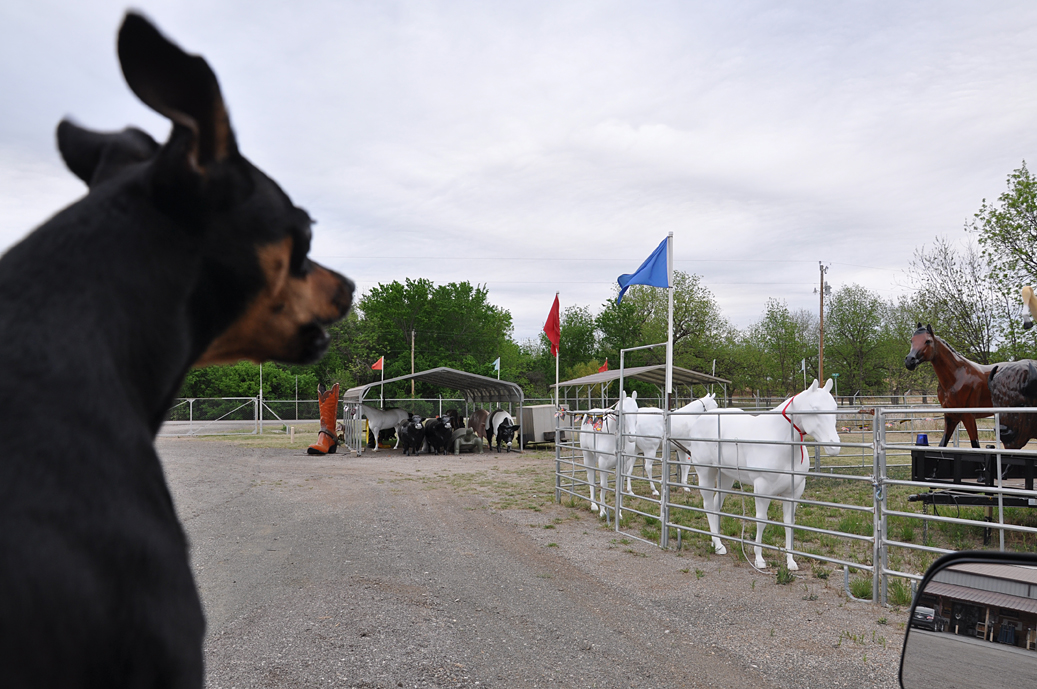 Fix & Nik come up for a closer look.  Fix isn’t fooled.  But Nik can’t stand it and immediately jumps out the window ready for a good run.  He’s shocked when they turn out to be fakes. 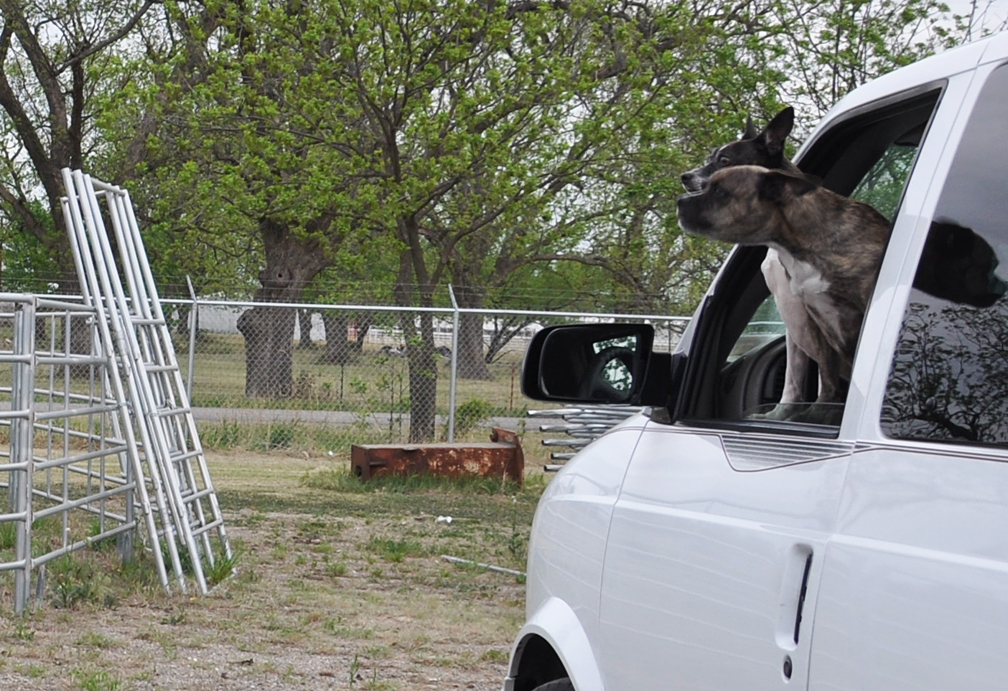 Fix keeps an eye on them, just in case.  Or pondering these existence and purpose of fiberglass animals.  Grip is in the backseat — barking and staying out of the mayhem up front: 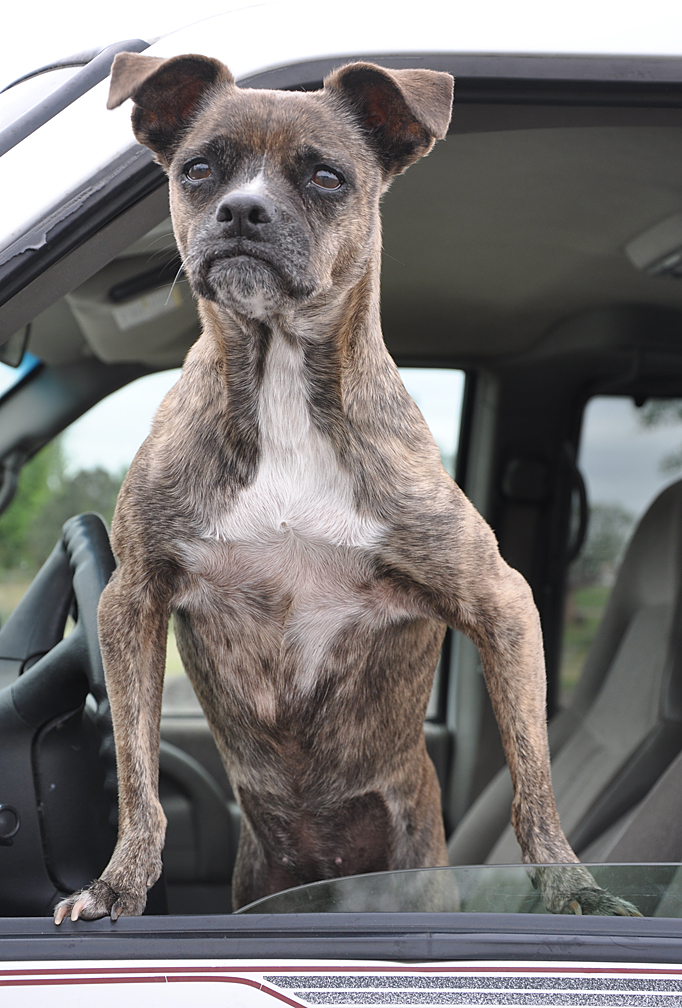 So Steppin-Out is really a Western wear store.  I had gone there for the cowboy Muffler Man.  Apparently, they’re big on fiberglass animals as well.  Another location in Ada?  I’m going there tomorrow! 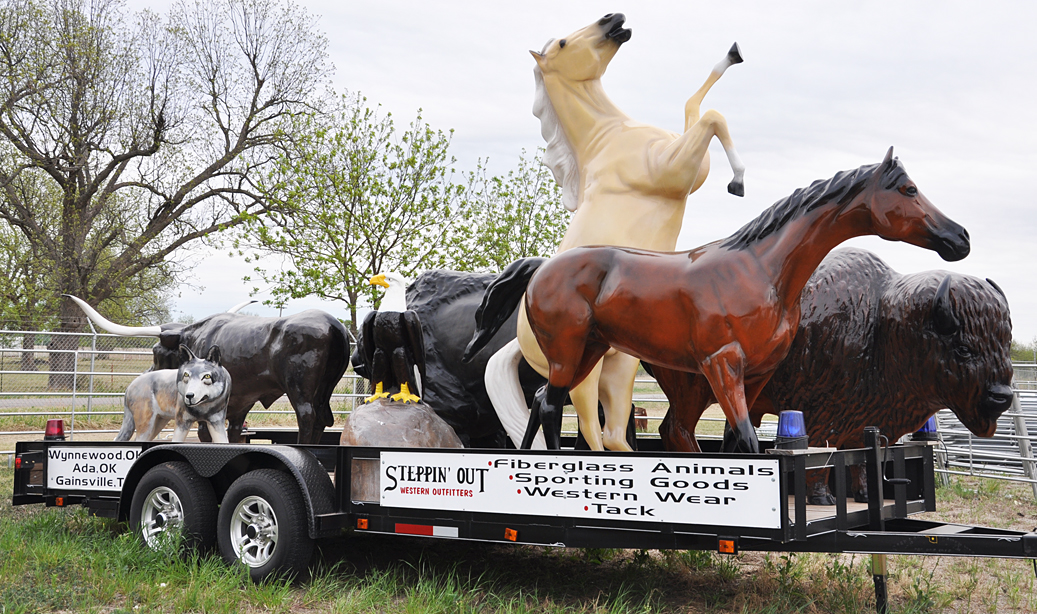 I’m big on fiberglass dinosaurs.  I’ve got a section at my site for them & a page for the Sinclair types:
http://agilitynut.com/dinos/sinclair.html 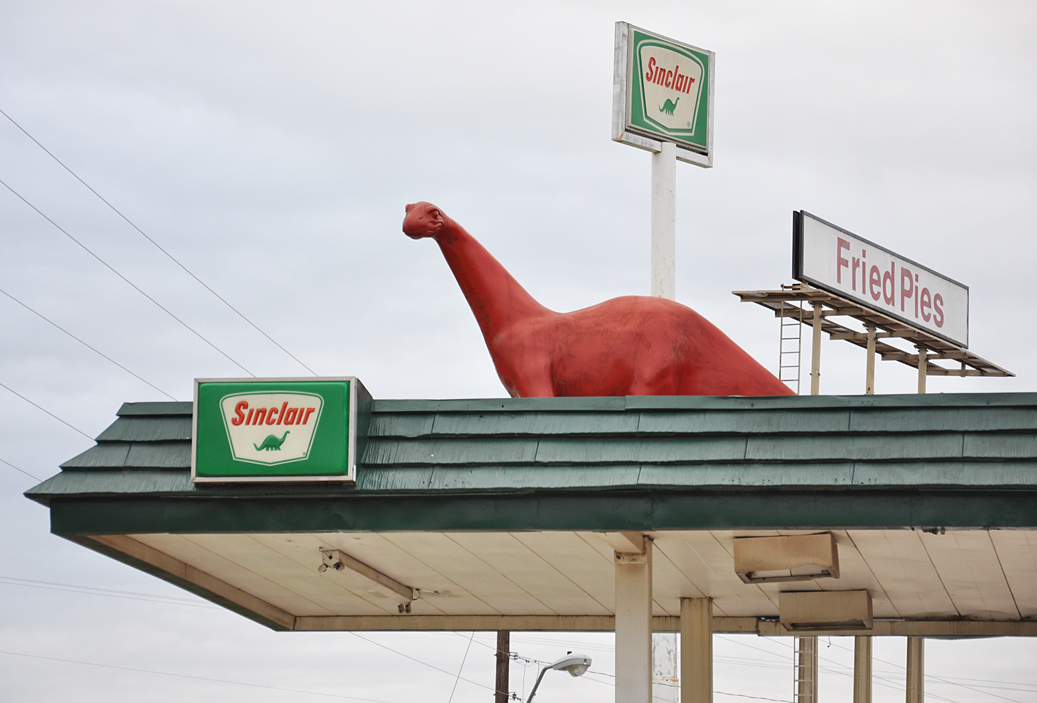 So, yes, of course, I stocked the dog crate pantry with three pies:  blackberry, apricot and coconut.  The third sounds very risky but what the heck.
http://arbucklemountainfriedpies.yolasite.com/

I posed the blackberry pie on the bumper of a good-ole-boy’s truck bumper.  This one was actually a pretty small truck — but American, of course.  I know we’re in Oklahoma now but Davis is very close to Texas.  I think 80 percent of the vehicles in Texas are trucks.  And though they claim they use them for “haulin”, I’m bettin’ that it’s mostly just a looks thing.  And not just for men — I saw lots of petite women driving Ford 350s and such.  Anyhow, yes, the pie was good — but probably way better, crispier in the morning.  This was 8pm. 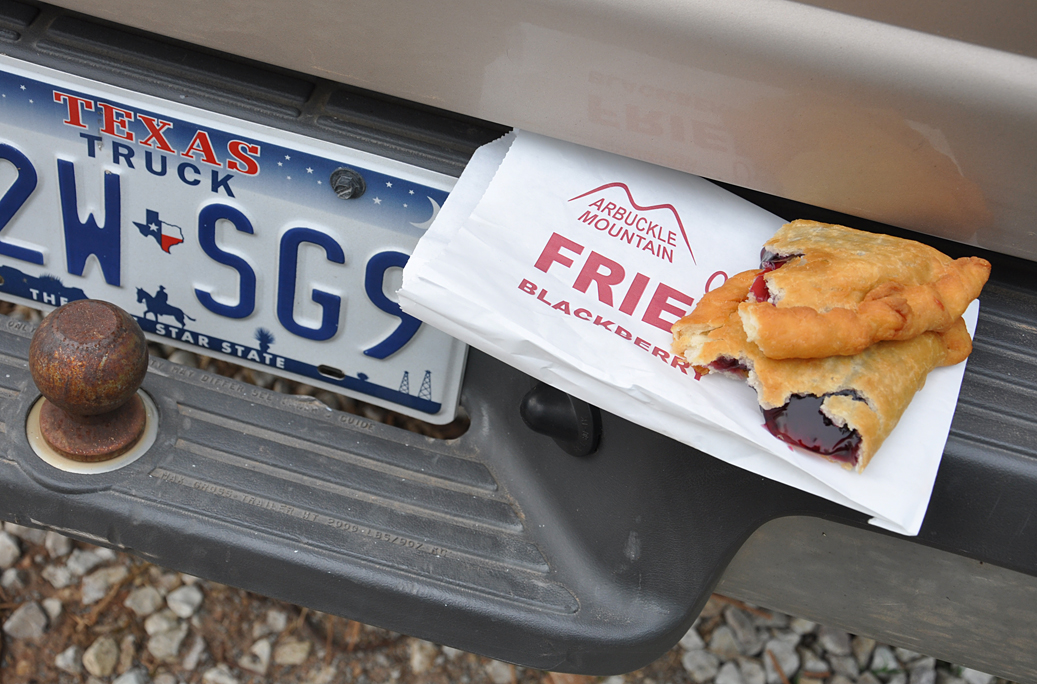 Tomorrow — more southern & southeastern OK stops.  Hoping to wind up in OKC or thereabouts by evening.  And though I don’t understand or trust the forecasters, Friday is supposed to be the sunniest day for a while so I’d better maximize it for high-volume shooting.