It took a lot longer to finish up Iowa than I thought.  Part of it is the quantity of road construction everywhere I go — repaving.  Which means one lane of traffic and pilot cars.  Or worse, long roundabout detours.  So I finally got to Missouri around 5pm.  Which is sort of a relief since I’m officially at the halfway point timewise.  I should be able to really dig in to these two states now (KS & MO) with the time remaining.  Then if need be, blow off the southern IN, IL, OH & KY stuff. Though it will hurt.

Lots of running and swimming for the dogs today.  Nik had to work hard against the current of the Mississippi — but I think he really likes the additional challenge.  Not to worry — I’m not doing anything, anywhere unsafe.   Oh, except for one near catastrophe this afternoon.  Regular followers of this blog know how Grem likes to ride shotgun from my side.  Between my arm and the window.  And of course, I’m always careful with the amount that that window is open.  Especially since she bounces around when she sees dogs, motorcycles, suspicious people.  But somehow, I guess I’d been taking a photo from the van (something I rarely do) and not rolled the window back up.  So, I’m going around a corner from a main street at about 5mph and plop — Grem falls out the window and lands half on her feet, half on her side.  I stop immediately and she stood there looking shocked.  I immediately opened the door and called her.  And she got that look that I know all too well:  “I’m FREE!”.  Which usually means bolting into the distance at about 40mph in random, runaway fashion.  Luckily, I’ve been working SO hard at recalls for years with her that this time — as she ran through the options in her mind — she elected to jump back in the van.  Sheesh!  She would’ve been flattened for sure if she’d run into that main street.  So, yes, I will forever be extra careful — as I’m sure she will be — regarding that window.

The day started out gloomy and cloudy with some sprinkles here and there.  But got sunny by afternoon.  I’ve been really lucky for most of this trip.  Nothing else noteworthy and I’ve got a bunch of photos for you — so let’s roll ’em.

The day started in Cedar Rapids — here are a couple photos from there.  A spiffy sign and note the  odd plastic bubble on the mini canopy.

This very intact old A&W looks like it’s been closed for a long time: 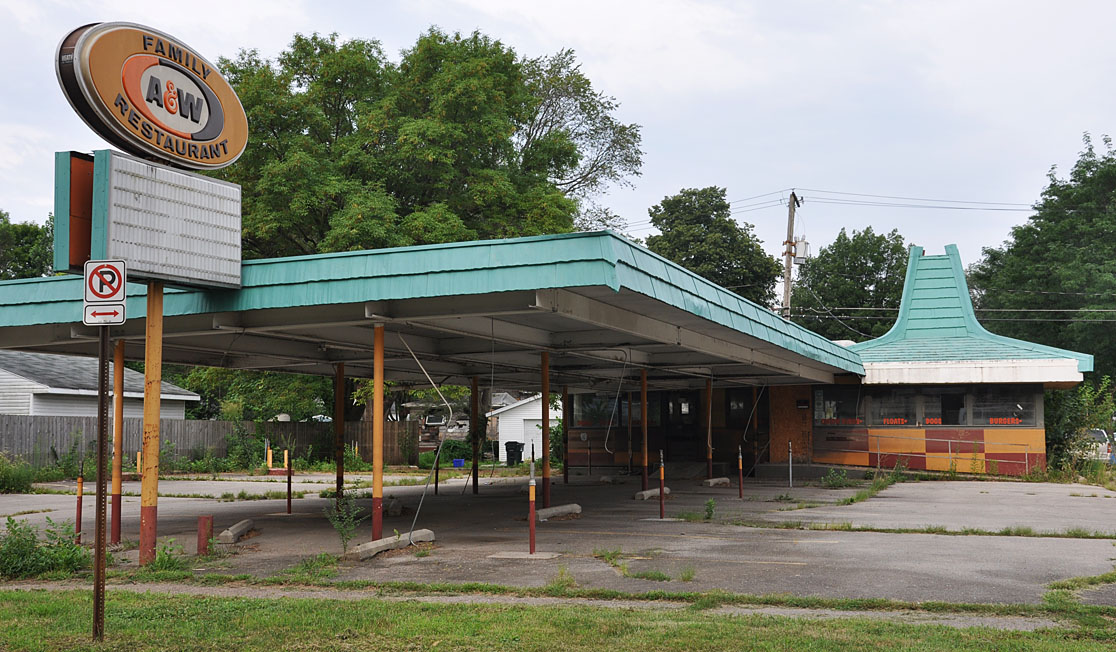 A nice embossed Sherwin-Williams sign from Olin.  Where we got stuck in this tiny town’s weird Western parade.  I think every horse in town was in it.  People even marched around with their less-than-a-year old horses in halter.  There was an announcer and since I was following the parade right behind the cop, he even said “and some folks from New York are with us today” and everybody clapped.  And I waved.  Weird.

A cutie from Davenport: 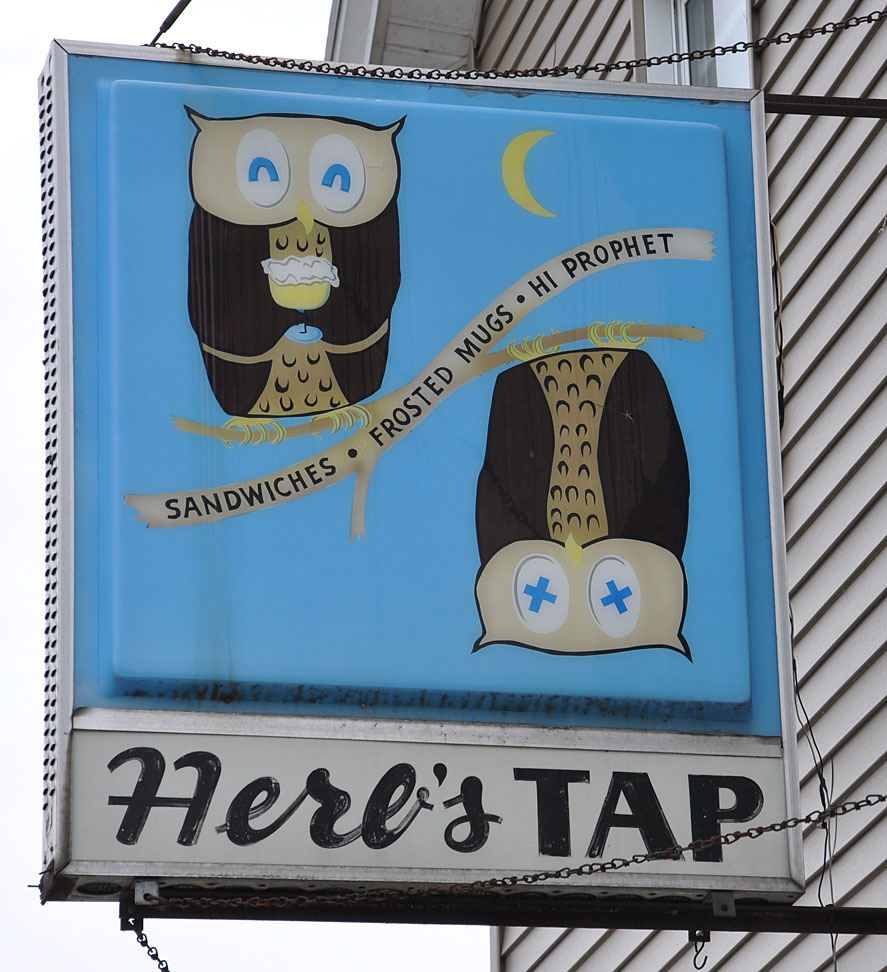 More  from Davenport.  This business had some fun pedal cars in the window.  They’ve been around since 1906 — wow!
http://www.emeisautomotive.com/

This rusty one is from LeClaire.  I believe it was a coffee shop below now: 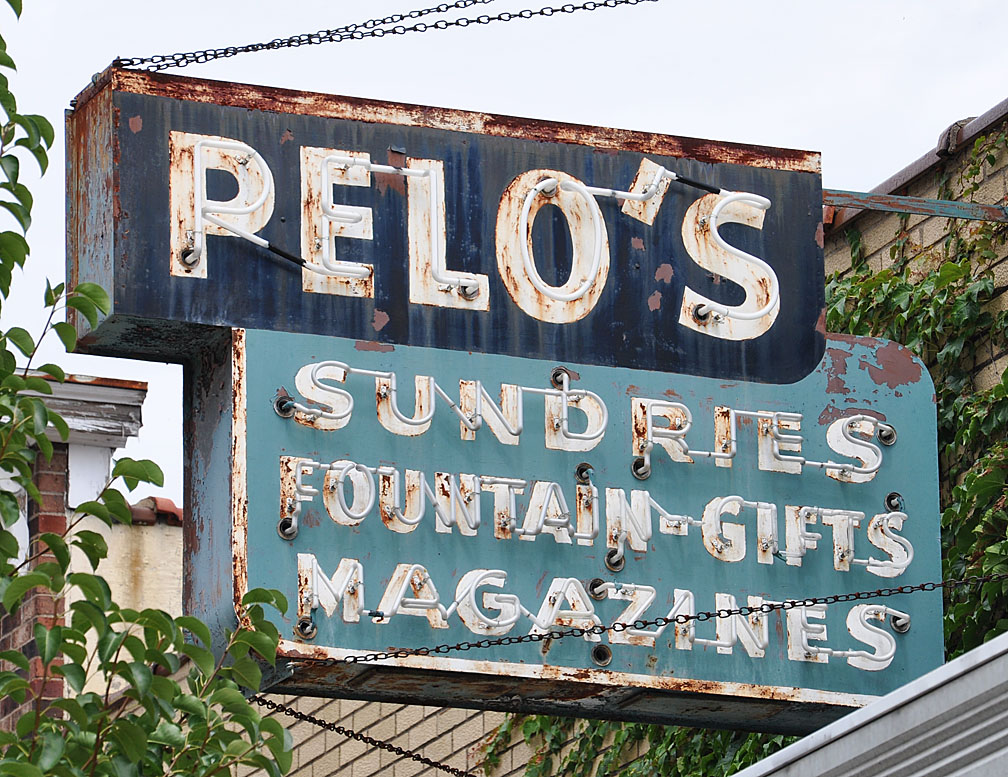 Responding to a special request for bridge photos — here’s one. Sorry about the bugs and glare.  I ventured across the Mississippi briefly today to grab a couple things in Nauvoo, IL from Fort Madison, IA.  Evidently, this is the world’s longest, double-decker swing span bridge.  Lost some time here, too, as we waited for the “swinging” action.  A big chunk of the bridge turns sideways so that ships below can pass underneath.  Here are some other photos & info about it — but, oddly enough, no photos of the bridge rotated:
http://www.johnweeks.com/river_mississippi/pagesB/umissB11.html

This page has an animated illustration that gives you the idea:
http://en.wikipedia.org/wiki/Swing_bridge

Some Nauvoo, IL shots. Who can resist these colorful, embossed product signs?

I’m not sure if this is an old sign touched up — or just a nostalgic piece.  I really like the bull’s crazy eyes: 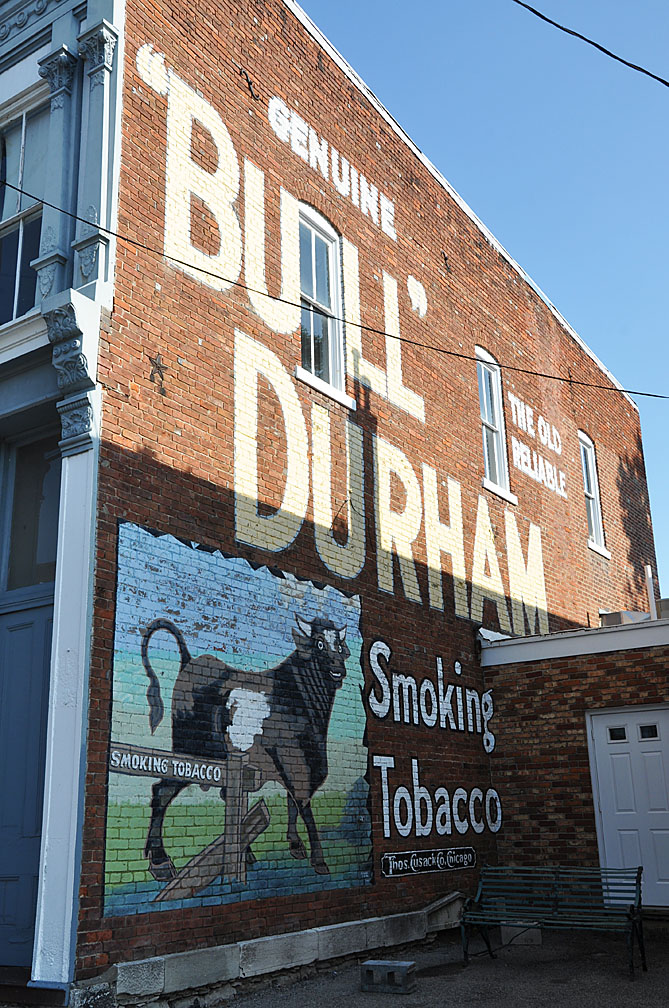 Back in Iowa — this from Fort Madison.  I found it really kind of creepy to have this mini golf right at the foot of the Iowa State Penitentiary.  The prison was a really foreboding place.  Almost like a haunted castle — which made me feel more uncomfortable than a more modern-looking prison.

A couple other shots from Fort Madison.  Stainless steel letters / sign on white vitrolite (glass tiles).  Looks like a jewelry store — but it’s actually a hunting store — and apparently always has been:

And this one with black vitrolite — combined with the remainder of a classic red Woolworth department store sign: 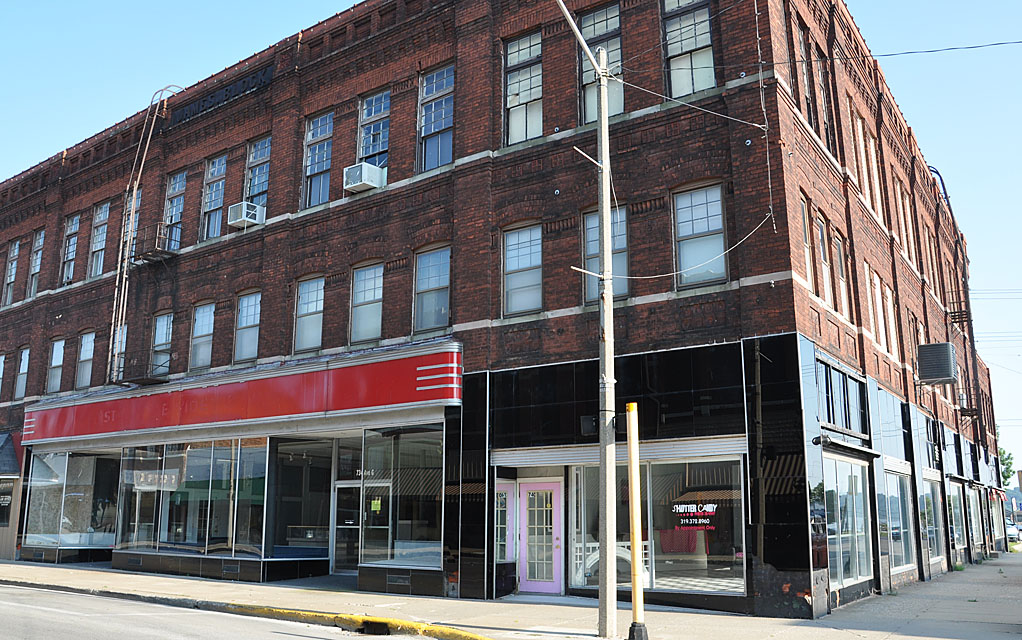 And lastly — sure to give you nightmares if you’re reading this as late as I’m typing it.  This eyeball sign is perched on top of a more mundane box sign for an “eye care specialist” sign in Keokuk: 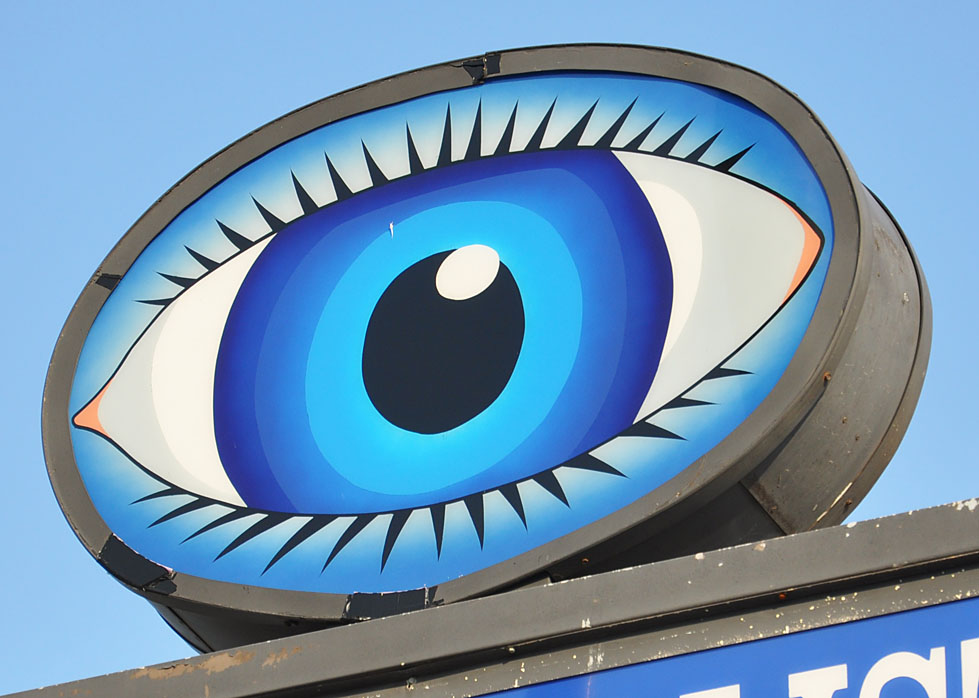